The show gardens at Chelsea have come under some criticism this year for lacking ‘pizazz’ or show-stopping drama. At LAN we don’t believe this is true. While it could be said that many of the gardens portray a subtly that belies their depth and meaning, this year’s show gardens all demonstrate an attention to detail that marks them out as being stunning in their own right. Here we delve a little deeper to bring you the best of the best from the world’s greatest flower show. 10. Tokonoma (An Alcove) Garden 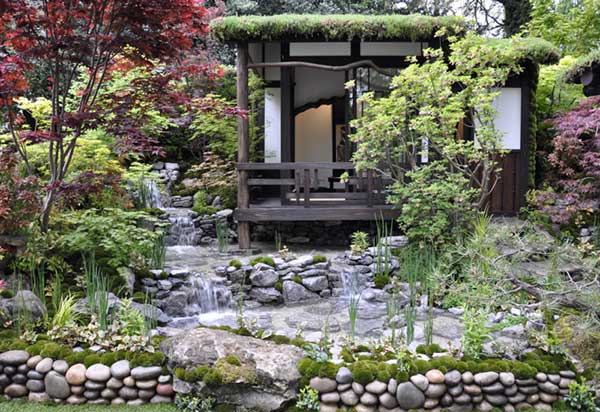 Designer: Kazuyuki Ishihara Construction: Ishihara Kazuyuki Design Laboratory Awards: Gold Medal, Best Artisan Garden This rendering of a traditional Japanese tatami room garden is a traditional aesthetic that is not easy to interpret from a western viewpoint, but the naturalistic aesthetic order of the composition and attention to detail speak loudly of a beautifully designed and built garden. We loved the delicate sound of the water adding a constant accompaniment to the garden. 9. Stoke-on-Trent’s Story of Regeneration 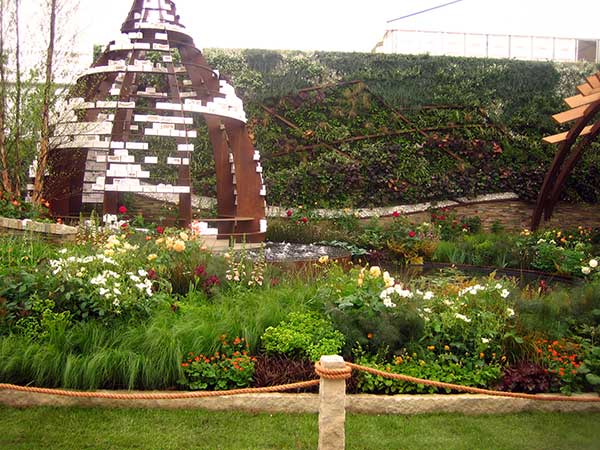 Designer: The Landscape Team, Stoke-on-Trent City Council Construction: Bartholomew Landscaping Awards: Silver Medal In this garden the huge green wall forms a backdrop to the water feature of interlocking circular forms. The sinuous forms of the design lend the garden an easy relaxed fluidity, which is slightly marred by the stark cor-ten steel pottery bottle kiln structure, which overly dominates the garden. 8. The Laurent-Perrier Garden 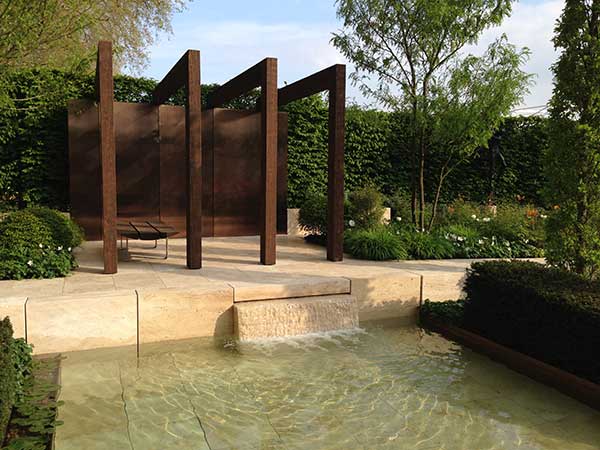 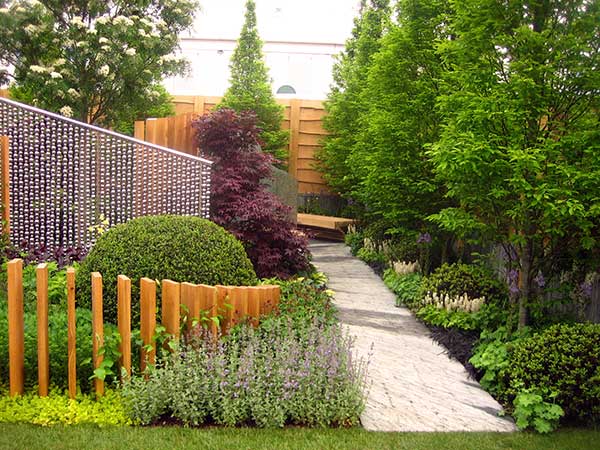 Designer: Darren Hawkes Construction: The Garden Builders with Wheelbarrow The SeeAbility garden focuses on sight loss as inspiration for the straight lines and strongly contrasting color palette. Perhaps the contrasting purples of the angelica (Angelica ‘Atropurpurea’) and yellows of the euphobia (Euphorbia characais ‘Wulfenii’ and Euphorbia ‘Martinii’) aren’t to everyone’s personal taste, but we simply love the attention to detail in hard landscape elements like the on-edge slate path and the wall of welded sections of pipe. 6. East Village Garden 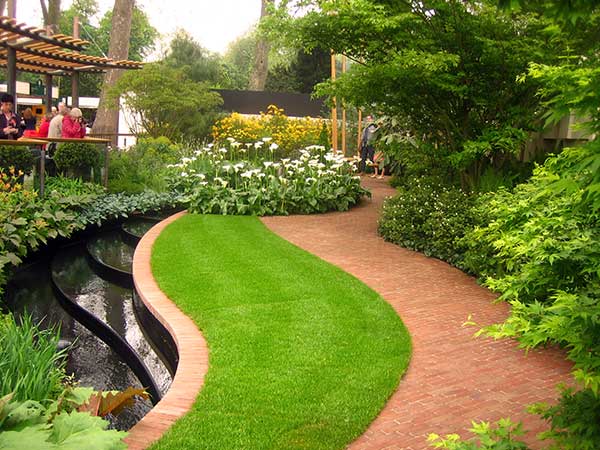 Designer: Balston Agius Ltd (Michael Balston and Marie-Louise Agius) Construction: Willerby Landscapes Awards: Gold Medal The design draws conceptually on the London 2012 Olympic Legacy and is reflected in the strong architecture and references to local landmarks. We like the simple clean lines of the forms, many of which echo the larger scale forms of the Queen Elizabeth Park. 5. The M&G Centenary Garden ‘Windows Through Time’ 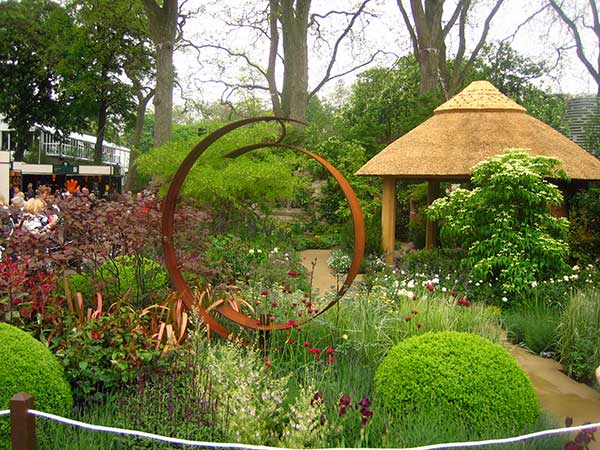 Designer:  Roger Platts Construction: Roger Platts, NR Jupp Awards: Gold Medal The M&G Centenary Garden is, perhaps surprisingly, the only show garden to have run with the centenary theme. While this manifests in some slightly ‘predictable’ architectural elements, the planting design is of such high quality that this garden is easily warranted its place in our top ten! We particularly love the mix of textures in the neatly clipped spindle (Euonymus alatus ‘Compactus’) next to the soft vertical spires of the foxgloves (Digitalis) and feathery foliage of the grasses (Calamagrostis x arcutiflora ‘Karl Foster’ and C. x ‘Avalanche’). 4. The Wasteland Garden 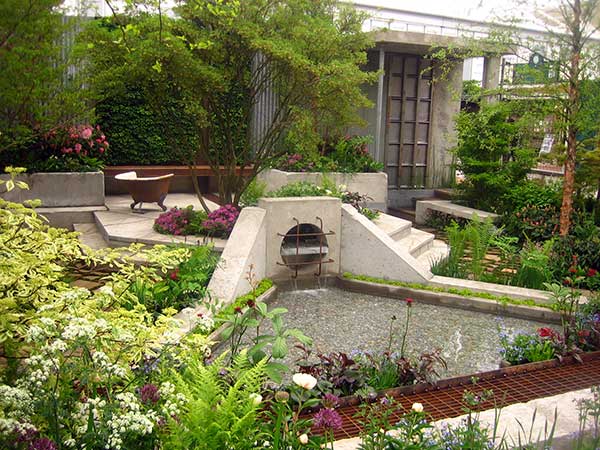 Designer Kate Gould Construction: The Team Landscapers Awards: Gold Medal We love this show garden for many reasons. Not least of all the depth of thought that has gone into representing the conceptual theme. The didactic theme of the garden seeks to demonstrate how brownfield inner city wastelands have horticultural potential. All materials and elements within the garden can be found on a typical wasteland, and yet have been artfully crafted into a beautiful garden. 3. The RBC Blue Water Roof Garden 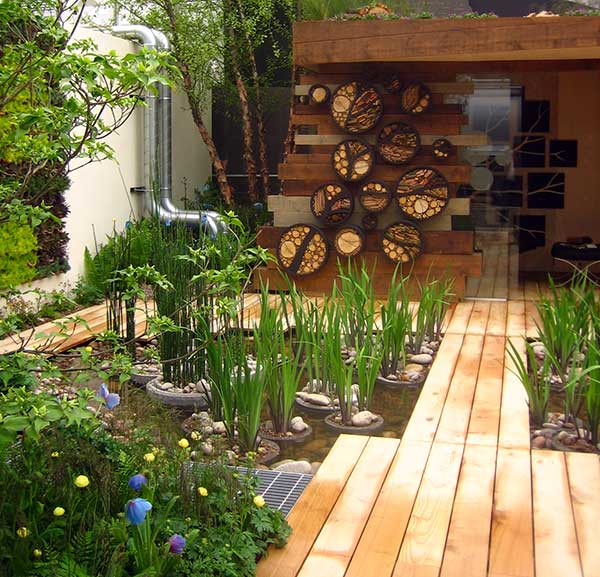 Designer: Professor Nigel Dunnett and The Landscape Agency Construction: Landform Consultants Awards: Gold Medal The contrasting circular and rectilinear form of this garden at first glance appear to be unreconciled. It isn’t until you have had time to take it all in that you can appreciate the repetition in form across differing elements of the garden, which bring the whole together as one composition. We particularly love the aesthetic circular hibernacula proving that sustainability can also be beautiful. 2. The Trailfinders Australian Garden 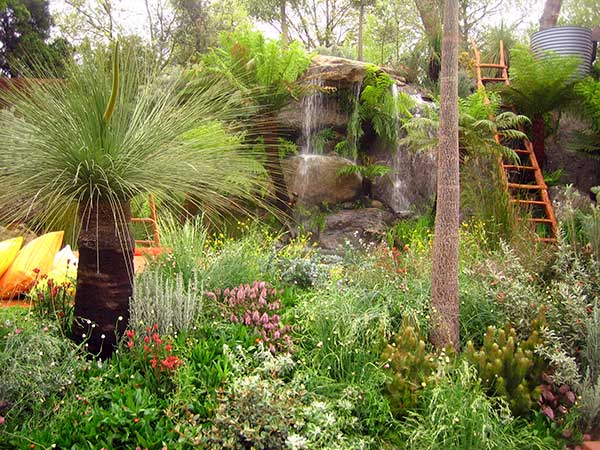 Designer: Phil Johnson Construction: Phil Johnson Landscapes Awards: Gold Medal, Best in Show The Australian garden is, without a doubt, an amazing feat of design, engineering, and construction. The garden features a microcosm of Australian habitats centered around a naturalistic billabong, complete with waterfall. The sheer scale of the garden is impressive. 1. The Arthritis Research UK Garden 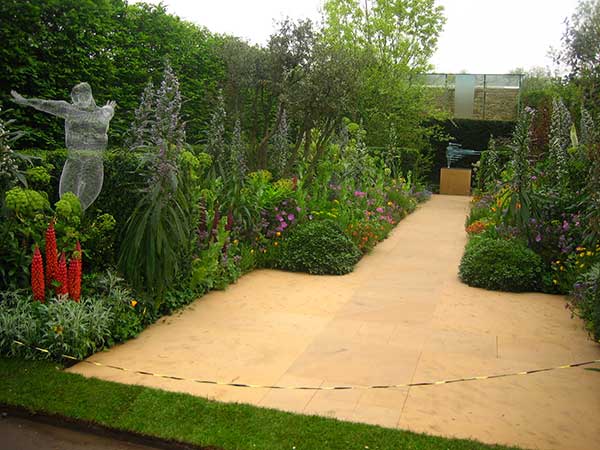 Designer: Chris Beardshaw Construction: Keith Chapman Landscapes Sponsor: Arthritis Research UK Awards: Gold Medal Although this garden did not win ‘Best In Show’ we love it as it works so well on so many levels. Gardens as pieces of artwork can be allegorical and steeped in layers of conceptual meaning. We love this garden as the concept of exploring someone’s personal journey being diagnosed with arthritis. It translates beautifully into a garden that works spatially, conceptually, aesthetically and functionally. Other articles of interest:

While this year the show gardens at the RHS Chelsea Flower Show do not display ostentatious gimmicks or make outlandish design statements, there is a subtle and understated intelligence to many of them. The Trailfinder’s Australian Garden demonstrates exuberant drama in its ecologically sustainable microcosm, while other gardens, like the Arthritis Research UK Garden and the Wasteland Garden, use British native plants to create more subtle effects. One thing you can always count on at Chelsea is that there is something for everyone! Article written by Ashley Penn Enjoy what you’ve read! Support us and pick up one of our awesome T-shirts and hoodies today, Click the link