People are returning to nature and to the principles of ecology, especially through small-scale projects that reorganize urban spaces that lack greenery. Urban gardens and green spaces are the most popular of these projects, so we decided to talk to representatives of an association from Cluj-Napoca, Romania, which has started developing urban gardens. “Verdeata Isteata`” brings a new perspective on the disused city green spaces and engages the community in embracing a new perspective on ecology and urban gardening. 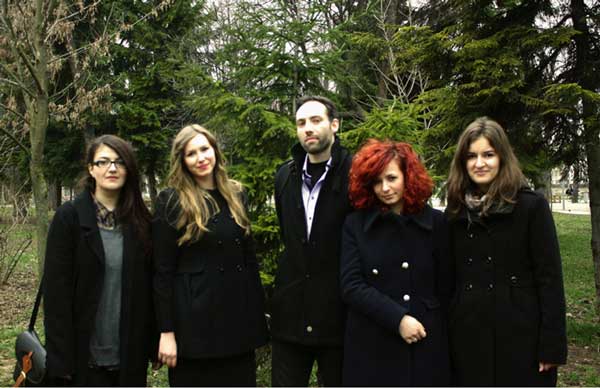 How did you get this idea for an urban garden in such an urban neighborhood like Manastur? We were looking for quite a while for ways of expressing our ideas in the urban landscape of Cluj-Napoca. We took the local authorities’ program “Adopt a Green Space” and turned it into a platform for expressing our alternative ideas for developing a green space in the city through specific urban gardening techniques. Out of a list of 40 green spaces, we chose this one because it has a high level of visibility, high traffic, no previous development, and a high grade for passing on a message. In the context of a highly urbanized Manastur, with a predominantly uniformed and lacking personality, an urban garden would diversify the landscape, bringing a fresh note to the city image. 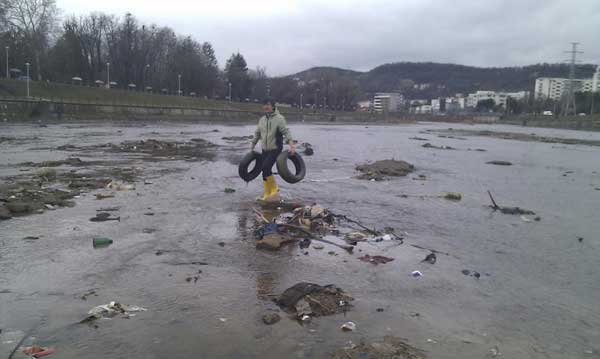 How did the recycling activity on the Somes River go? How did the idea for upcycling come into use for the urban garden? The idea came at the beginning of the project, recycling being a great necessity in the urban context. Seeing the river every day, we noticed the high amount of rubbish that gets dumped in the river. This led to the idea that it can be an efficient source of materials for the fixtures in our garden. We chose an unusual way of promoting a public recycling event by organizing a fishing contest. The objective of the contest was to collect 20 tires from the riverbed, which we previously identified. The secondary objective was to sensitize our fellow citizens to the necessity of cleaning the leisure area around the “Horia Demian” sports venue, situated near the river. Unfortunately, with the exception of the volunteers involved in the project, the local people didn’t offer to help. 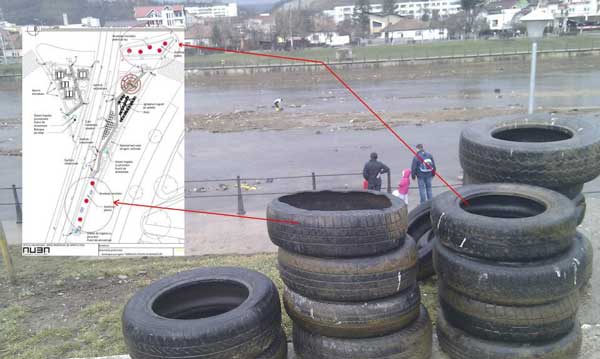 What is the profile of your garden and what elements will it have? Describe it for us. The social and educational program extends to a period of three years, with this initial site of 206 square meters being cut up in three triangles with intense circulation. Access to the site will be by a path going in a zigzag pattern, each distinct area having urban agricultural fixtures. We tried to give an ascending aspect to the extremities of the site going to the middle, slightly higher ground. In the west triangle, we tried to replicate the image of a mini-city in the form of mini-greenhouses for seedlings.  An interesting trait of the project is the drip irrigation system, which is a first in the city’s green spaces. We will practice urban gardening with a double purpose: practical and aesthetical. 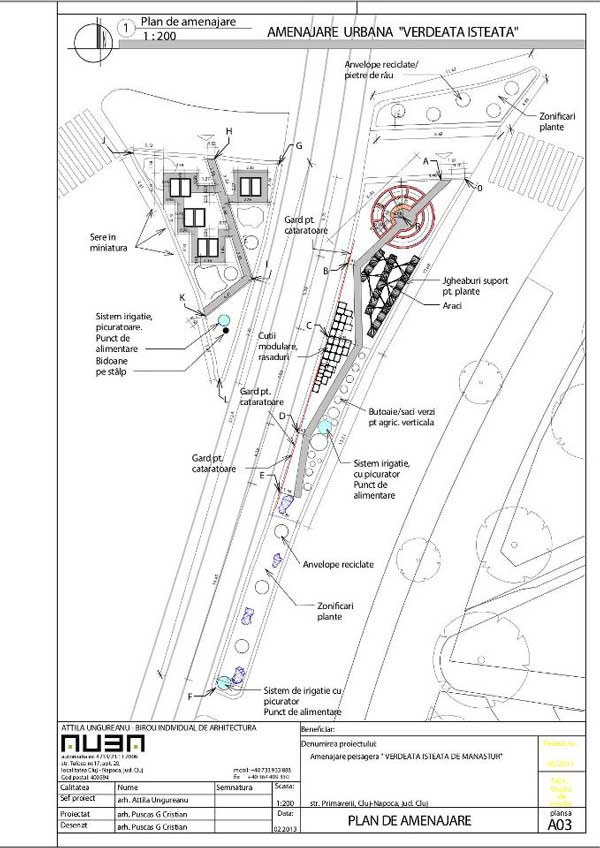 How is the project financed and who are the participants? When and how will it be implemented? This is an educational program, which addressed the social message of defining the community in Manastur. The entire project is based on voluntary work and the principles of recycling. We are an open group; anyone who is dedicated to the values that brought us together can join the association. The project is in the course of being implemented and its accountability to the community is more than monitoring and maintaining the site, but going as far as involving people through interactive events. The inauguration of the project will take place around the Easter holidays. 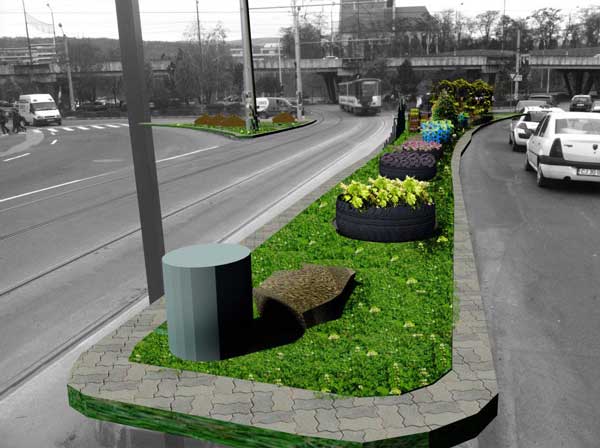 What effect do you presume it will have on the local community? Such projects are more and more popular. Why do you think they are important? The desired effect is to create awareness and open up the community to a healthier and more active lifestyle. We are dealing with a project that gives people a public space initially insignificant and unheeded, while calling out the community to take responsibility for it. Because there is no precedent in creating such projects in Romania, Verdeata Isteata can be considered a pioneer in a new era in which “the earth does not belong to the people, but the people are those who belong to the earth.” 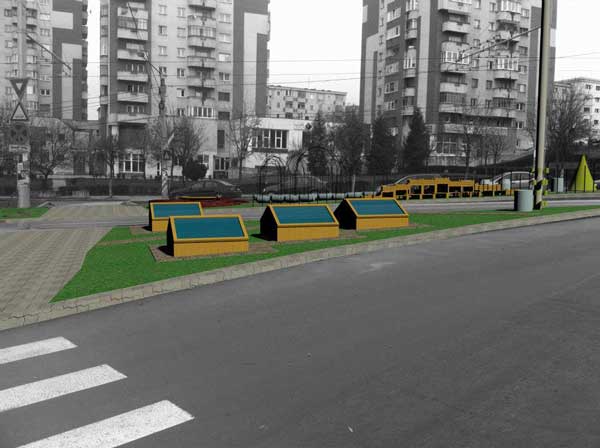 Is there a future for Verdeata Isteata? Will the projects extend to other areas of Cluj? Based on the high interest already manifested in this project, we expect things will not stop here. We have already identified other areas targeted for such projects, such an an area of the Canalul Morii corridor and the roof of the city’s old brush factory. The impact was felt in other cities like Lasi and Timisoara in Romania, so we can assume that it is possible to spread these kinds of projects nationwide. 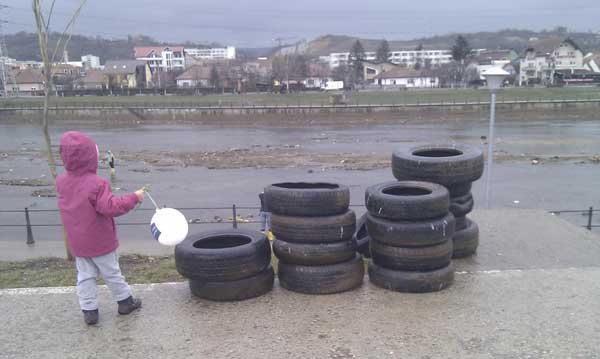 Give a short description of your association. Will you undertake other types of projects in the future? What is the main purpose of your activity? We are an informal group, open to all those who have common interests with us. We are talking about a community that grows organically and is based on ecological principles, among which we mention the principle of open resource, the recycling and recovery of resources and that of permaculture. Although in our informal group there is a great diversity of interests and activities, some of us have organized a work team specialized in urban gardens.” “We are architect Gelu Cristian Puscas, landscape engineer Oana Burla, landscape engineer Madalina Les, Paula Tripon and Camelia Maria Poliec, who are students in landscape architecture. We all promote these concepts because we want someday to see an urban lifestyle in harmony with the natural environment.” 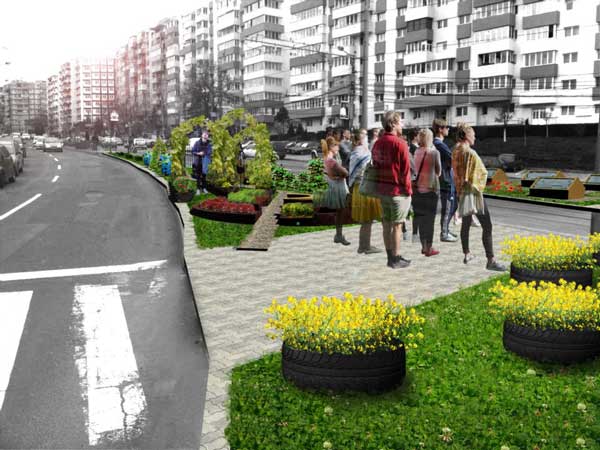 I once found a quote that said that “progress can only be made by voluntary work” and that is why such small-scale and slightly out-of-the-box projects are so important for the eco movements. This is the time to change the face of our cities and combine our technology and modern lifestyle with healthy green spots and urban gardening or agriculture. Projects like Verdeata Isteata need to become more widespread and are in need of more publicity, especially from a small-scale, community involvement perspective. Interview conducted by Oana Anghelache Verdeata Isteata Enjoy what you’ve read! Support us and pick up one of our awesome T-shirts and hoodies today, Click the link