Article by Nick Shannon – We take a look at this innovate urban project, which takes a dumpster and turns it into a growing ground for life.  Great conversations are often sparked by something out of the ordinary. If something disrupts your mundane daily activities, it often leads to more thought, questioning, and conversing with others. In the field of landscape architecture, we have the amazing opportunity to utilize this force and intervene in sites to catalyze the user’s perception of environmental issues. In New York City’s Gowanus neighborhood, dumpsters are taking on this purpose to educate the community through a temporary art installation/nursery that provides a visualization of the amount of stormwater a bio-swale can handle. It brings attention to the issue of combined sewage overflows and highlights the importance of green infrastructure in the city’s highly urbanized watersheds. The dumpster is being used as a tool to inspire conversation and action. We will explore how this project came about and what it is doing for Gownaus. 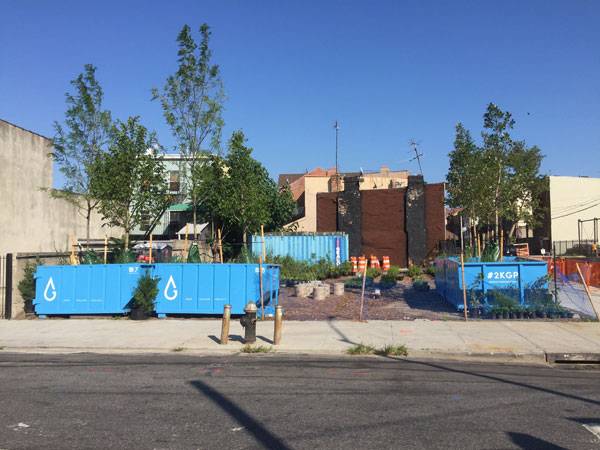 The Gowanus Neighborhood and its Dumpster

The Gowanus Canal is a highly urban and polluted water body. Historically, the Gowanus Canal was a tidal estuary surrounded by farms and mills – a functioning ecosystem before development. When the creek was turned into a canal, it was used to drain the marshland and create a commercial transportation hub that sparked the growth of adjacent industries. At the time, there was little environmental regulation. Waste from the new industries was discharged into the canal without treatment, contaminating the water with industrial pollutants such as coal tar and heavy metals that are still apparent today. The industrialization and urbanization of the Gowanus neighborhood is still a major part of its identity today, and the area still hosts local manufacturing and industrial businesses along the canal. However, the area is rapidly changing, with increasing pressure for residential development. 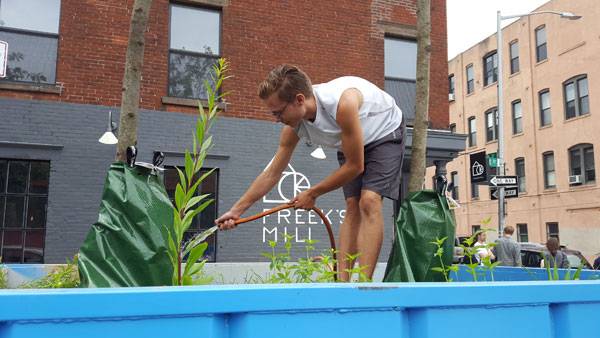 Volunteers are a vital part of the 2,000 Gallon Project. They help water the plants from adjacent fire hydrants. Photo credit: Gowanus Canal Conservancy

The dumpsters are part of the 2,000 Gallon Project, which consists of 10 2,000-gallon dumpsters that are being used as temporary nurseries and visualization tools to grasp how much water a bio-swale can handle during a rainstorm. Six of the dumpsters are scattered throughout the neighborhood, and four of them have been placed at 431 Carroll Street, the site of a pop-up nursery and stewardship center managed by the Gowanus Canal Conservancy. The GCC holds volunteer workdays, rainwater harvesting workshops, and urban ecology lectures to get people in the community involved in protecting their environment and to encourage a healthy canal watershed.

The dumpsters were installed under the Department of Transporation’s Street Seats program, which encourages the use of parking spaces for pop-up seating to facilitate a social public space – similar to (park)ing day. Two of the dumpsters have seating next to them, and the network of dumpsters spread across the neighborhood encourages community conversation and interaction focused on the health of the Gowanus Canal watershed and environmental stewardship.

What’s in the Dumpsters?

Each of the 10 dumpsters holds two trees and a mix of perennials. The plants are native, and were carefully selected based on their performance in the Gowanus neighborhood to ensure survival when planted on the street. 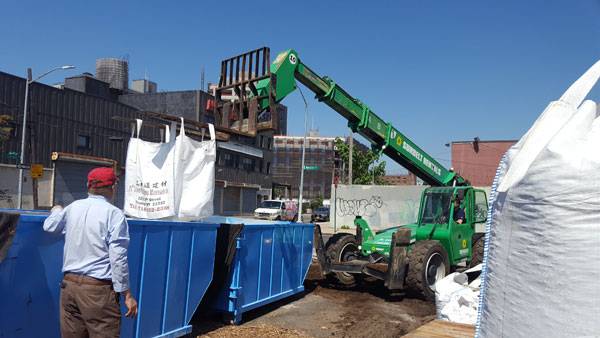 The trees in the dumpsters are:

The perennials currently thriving in the dumpsters are:

All of these plants are planted in fill soil mixed with compost with a layer of mulch on top to incorporate more nutrients into the soil and help it retain water more efficiently. Every tree has a watering bag attached to it that is filled up using water from adjacent fire hydrants. The perennials are watered with the fire hydrants, as well. Street trees improve air quality, cooling shade, and habitat for birds and wildlife. They also soak up stormwater. Mature trees manage up to 4,000 gallons of stormwater per year — the equivalent of two dumpsters. The Gowanus neighborhood has a lack of street trees, and it is sweltering to walk on the streets during the summer. This project serves as a nursery for 20 new street trees that will be planted this fall on streets throughout the neighborhood. 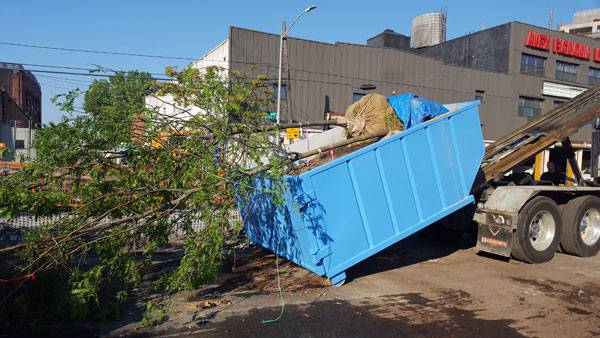 The dumpsters were moved from the nursery lot to their locations around the neighborhood. Photo credit: Gowanus Canal Conservancy

Pollution and Clean Up

Combined sewage overflows are the main source of pollution still entering the canal today, and green infrastructure is an easily implemented solution to reduce the amount of raw sewage emptying into the water. A total of 377 million gallons of combined sewer overflow enter the canal each year, and each 2,000-gallon dumpster provides visual representation of the immense scope of the problem. There is no single solution, but rather a collection of small-scale interventions that can add up to make a difference. The dumpsters are only part of the story; they are a small-scale intervention that is making a difference while planning for larger infrastructure is under development. People are awakening to the problem of the contamination and are starting to respond to the canal’s environmental and health concerns. Today, the health, smell, and water of the canal are starting to turn around. 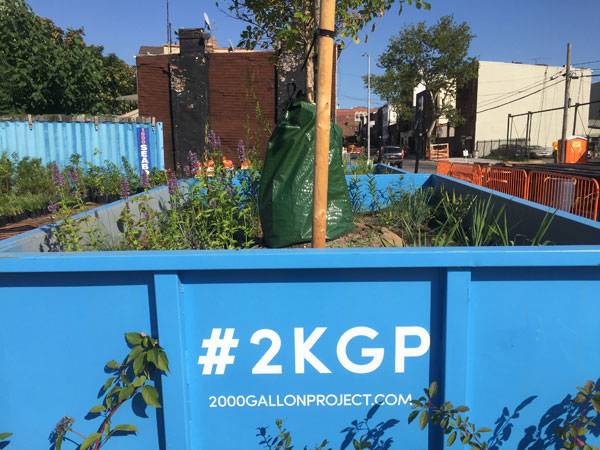 Trees from the dumpsters will be transplanted into tree pits around the neighborhood, where they will continue to provide ecosystem services. Photo credit: Gowanus Canal Conservancy

The Gowanus Canal was recently designated as a Superfund site, which has sparked action to clean up the contaminants. In the next decade, the canal will be dredged to clean up 10 feet of contaminated sediment. The flushing tunnel at the mouth of the canal was recently upgraded by the Environmental Protection Agency and is now more efficient in bringing oxygenated water from the East River. This has improved the smell of the water, and people are starting to change their perception. Two new stormwater tanks are also being built, which will greatly reduce the amount of raw sewage that overflows into the canal. These projects, in conjunction with a network of bio-swales, rain gardens, and tree pits, will greatly decrease the amount of stormwater contributing to combined sewage overflows. Bio-swales The dumpsters are a visualization of the water one bio-swale can handle during a storm event. So what are the functions of these bio-swales? Every new bio-swale will keep 2,244 gallons of stormwater out of the combined sewer system. The surface runoff from the road carries contaminants and is directed to the bio-swales through a curb cut, infiltrating the water into the soil through a gravel-and-sand retention base that cleans the water while keeping it out of the stormwater pipes. 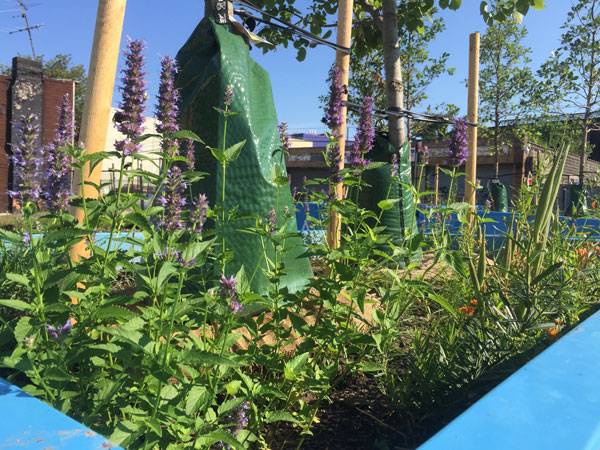 Every new bio-swale installed in the watershed prevents the amount of stormwater that could be contained in a dumpster from entering the combined sewer system. Photo credit: Gowanus Canal Conservancy

There are currently more than 91 bio-swales in the Gowanus watershed that prevent more than 204,204 gallons of runoff from entering the stormwater/sewage system. The Gowanus Canal Conservancy plans to encourage the installation of more bio-swales in the watershed and continues to maintain them with the help of local community stewards. This relatively low-cost network of green infrastructure is effective in cleaning runoff while holding it back from entering the combined sewage system. This is only one part of the larger solution. One size does not fit all, and in conjunction with rain barrels, rain gardens, tree pits, and stormwater tanks, change is happening.

The 2,000 Gallon Project is not just a temporary installation; it will have lasting effects long after the dumpsters are gone. The trees in the dumpsters will be planted around the neighborhood in vacant tree pits to increase the canopy cover, provide shade during the summer, soak up more stormwater, and provide critical habitat. So what happens when you fill a dumpster with dirt? It becomes a valuable educational tool that contains a micro-urban ecosystem that gets people talking about environmental concerns. A win-win for everybody. A cleaner Gowanus Canal is made possible through efforts like this, paving the way for increased biodiversity and cleaner air and water in the future. We need to protect our environment for future generations, and starting small but thinking big is the only way to get there! 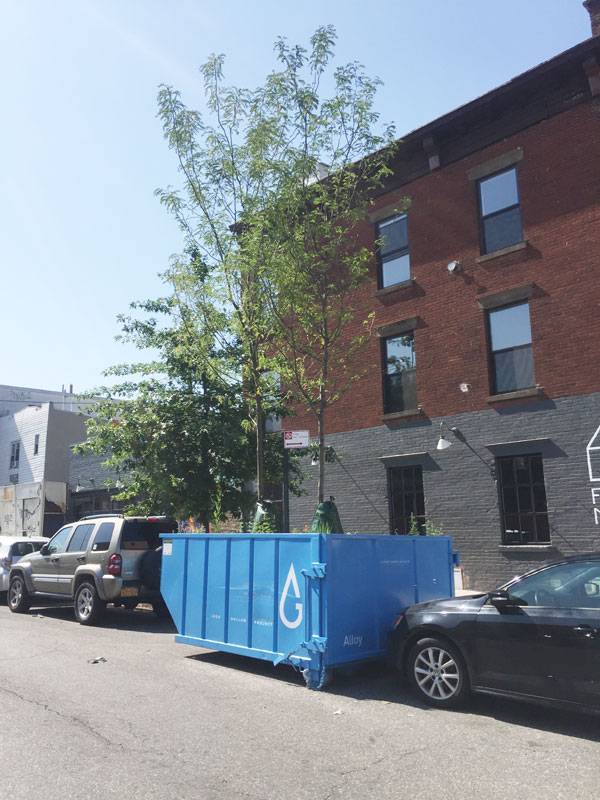