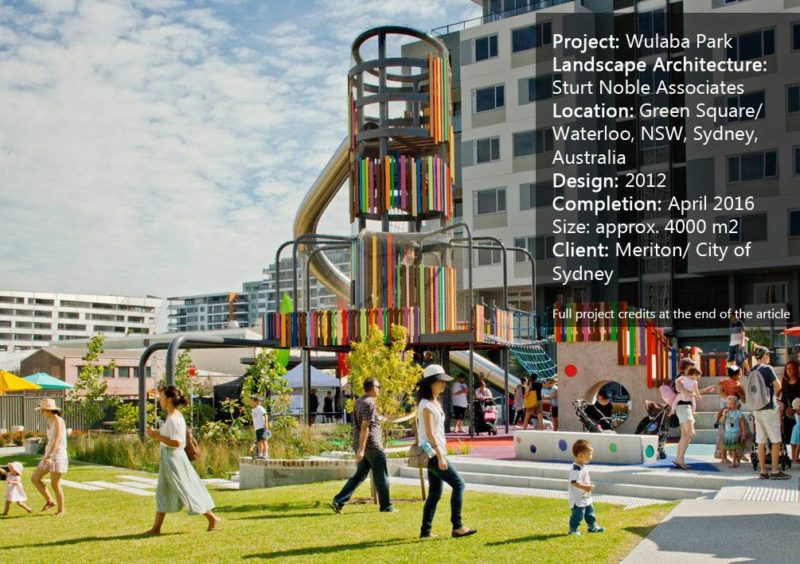 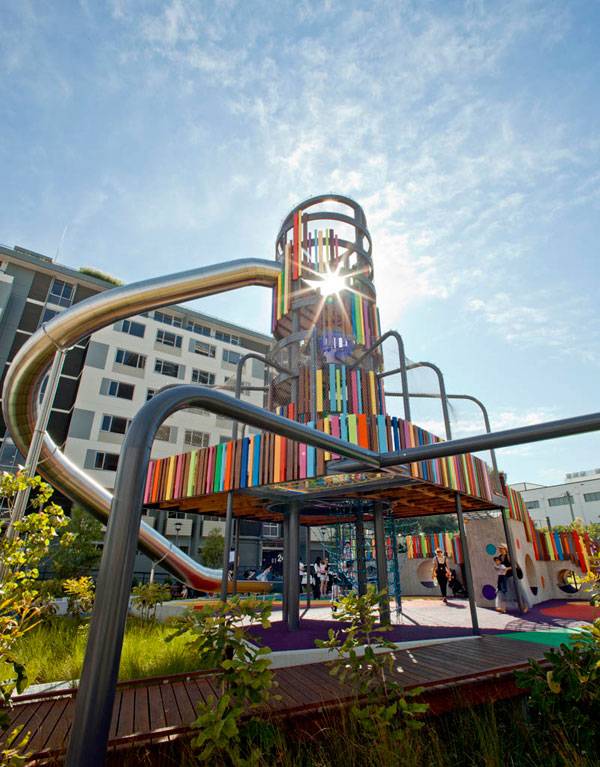 ‘Wulaba’ is an Aboriginal word of the Gadigal people meaning ‘rock wallaby’. Rock wallabies were once a regular sight around Waterloo, which was home to the largest swamp in the district until it was replaced with development in the early 20th century. The Green Square area used to be mainly industrial; it is currently undergoing one of the largest urban renewal projects ever undertaken in Australia, and one of the fastest-growing areas in Waterloo. When fully completed, it is expected to have a population of around 61,000 people. 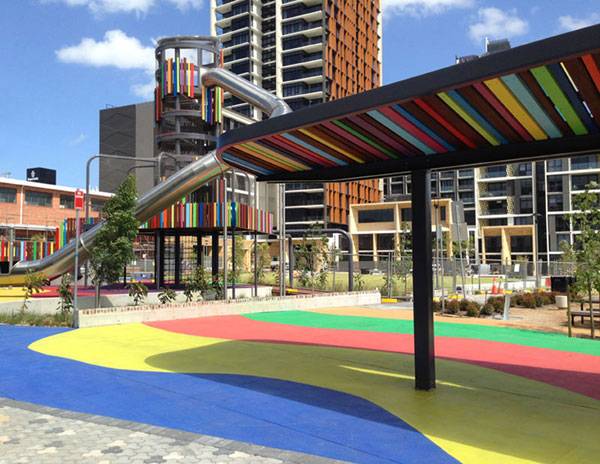 Making a Positive Contribution to the Community

Wulaba Park has been built next to a new residential development and makes a great contribution to community living by providing innovative recreational space. ‘With its challenging adventure playground, leafy picnic areas and purpose-built games facilities, Wulaba Park is a fantastic addition to the area where everyone can enjoy some downtime or playtime.’ City of Sydney Lord Mayor, Clover Moore 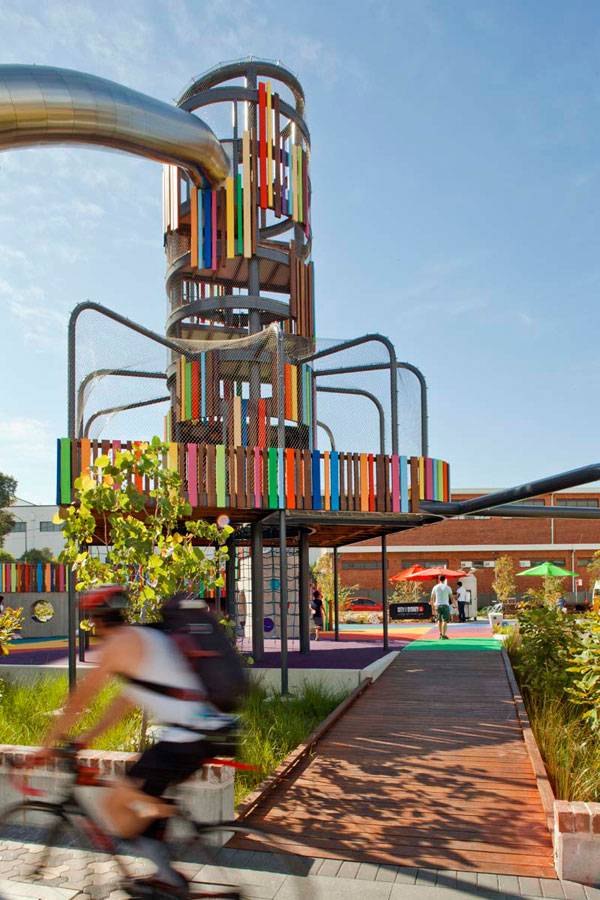 Bright Colours and a Lot of Play

One of Wulaba’s main attractions is the giant slide; with an impressive height of 8.80m, the tunnel slide is one of the highest and longest ever installed in a public space. It can be accessed from the top of the tower. The multi-functional, colourful 3-storey tower and play structure is the key visual element of the park; it has been custom-designed and references the classic Hills Rockets. A raised fort landing incorporates multiple play experiences; tunnels to scoot through, poles to slide down, nets and decks to climb. Three different-sized swings are there for all ages to enjoy. 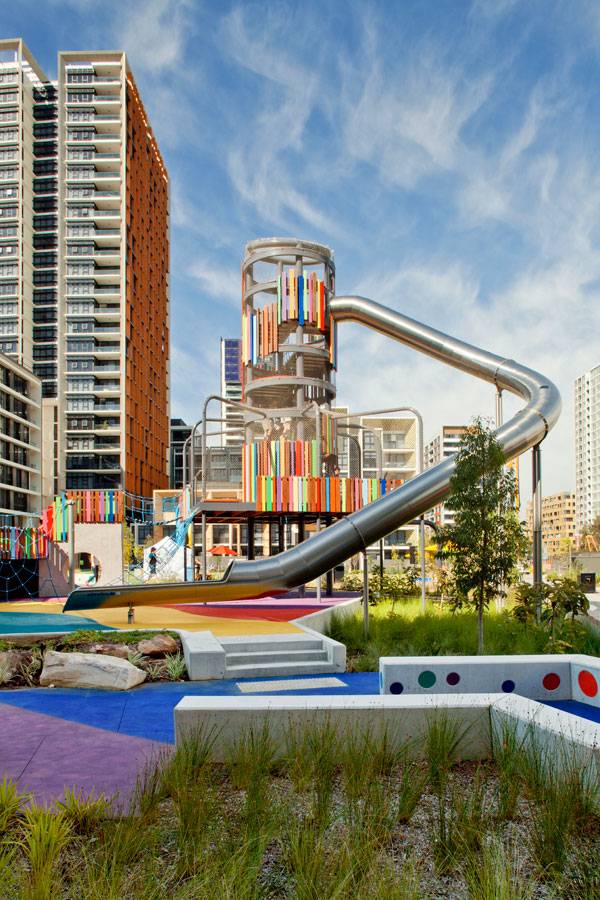 The Inclusion of Art Works

A series of artworks by artist Nuha Saad form an integral part of the design; this is done by incorporating colour and form. The strong rainbow colour theme – mainly yellow, orange, red, green and blue – is repeated in the pavements, softfall, concrete inlays, giant blocks, tower balustrades and pergola canopy. Nuha Saad is a Sydney-based artist whose work involves playful investigations into colour and form, combining ready-made objects and colour in inventive ways. She believes in the positive and transformative power of colour. Active visitors can use the handball and table tennis courts, while those who just want to sit and relax can do so in the seating and quiet areas that have been incorporated into the play areas. A large grassy lawn can be used for picnics, and a bespoke barbecue area completes a fun day out for the entire family. A Playground for All Senses The different play designs are based on the concept of discovery and help develop agility, balance, coordination & strength. A range of play elements, materials, planting and artworks that are incorporated into the play spaces help stimulate all five senses – sight, sound, touch, smell & taste. As an example, the play equipment is interwoven with natural play features like rocks and plants. 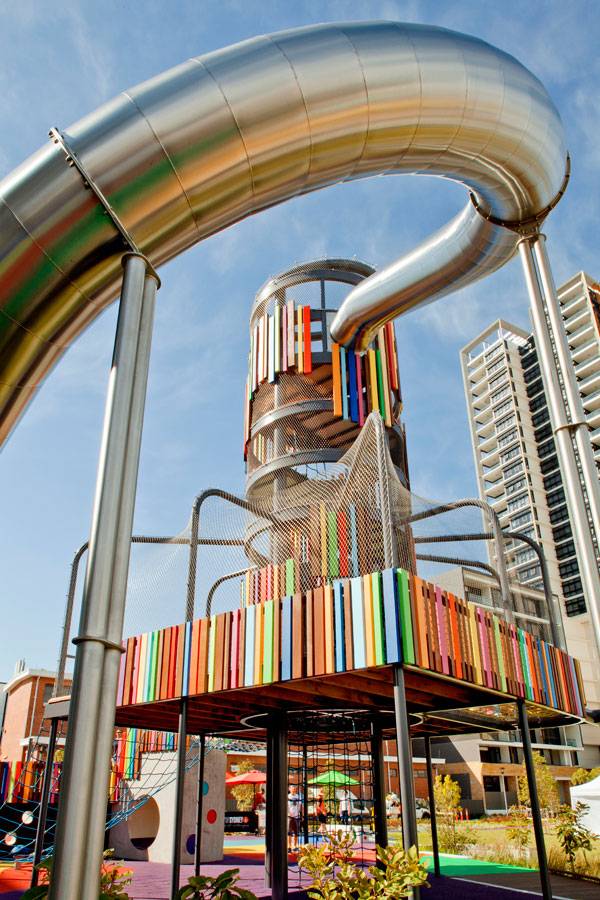 Playful Plantings Integrated plantings and level changes divide play spaces, creating discrete and separate areas within the playground. The various garden spaces provide seasonal variety and colour, and the planting scheme uses primarily native species with low water requirements. A water garden has also been incorporated. The garden areas to the east and west of the park use a mix of native and exotic plants interplanted with evergreen and deciduous trees. 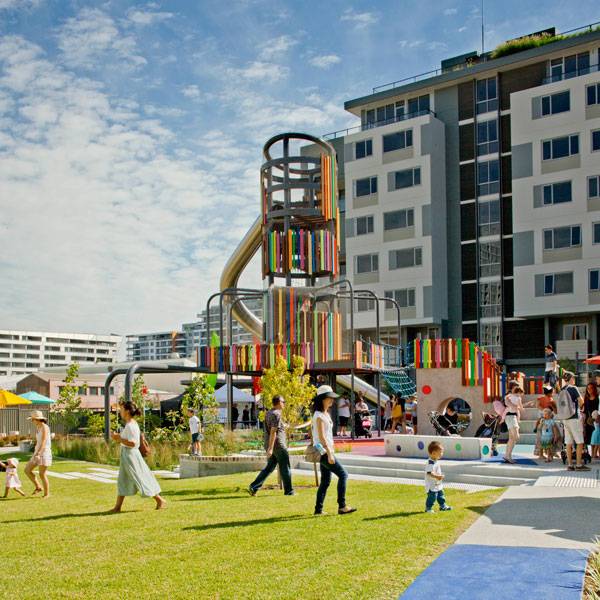 Paths link the various play areas, with surfaces of contrasting colours and textures – such as stone, concrete, sand, gravel, pebbles, bark and rubber softfall – adding to the play experience. The architects have also used sustainable materials throughout the project; recycled bricks, mulches, gravel, stone and sand. Syndey has recently undergone several regeneration projects – with another 4000m2 playground in its Central Business District, Darling Harbour. Wulaba Park has become what the architects have set out to create – a vibrant and fun neighbourhood park for passive and active recreation; an outdoor oasis amongst the towering apartment blocks of Sydney’s newly generated area of Waterloo. Since its opening in April 2016, it has received a lot of praise for its innovative concept and its value to the community. Not only is it a fantastically colourful adventure playground in Sydney’s new-look East, but also a forerunner in urban design. Do you think a park and playground like Wulaba Park can help improve community living and regenerate the Green Square area of Sydney? 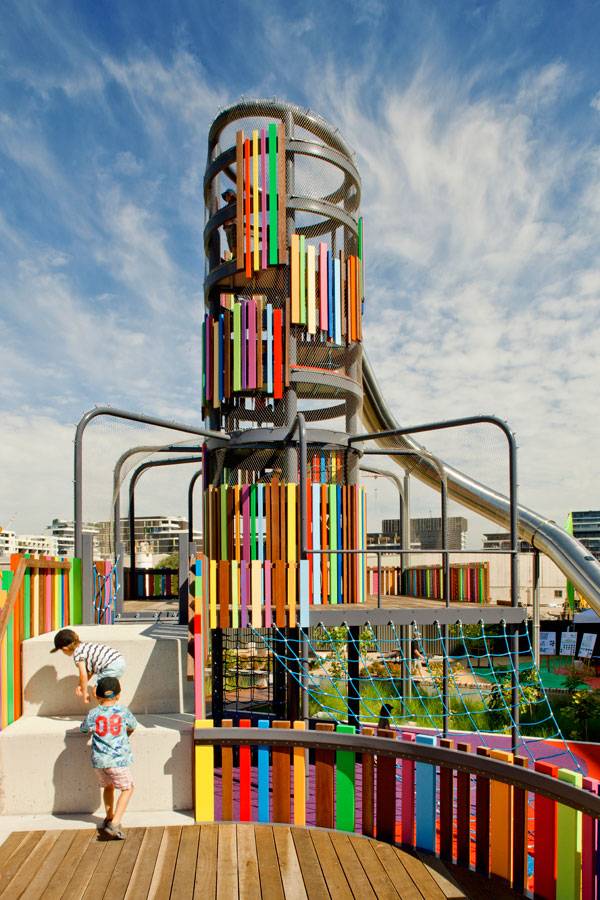