In 2003, I visited Sigiriya while on a field study abroad in grad school. At the time, I was struck by the formal similarities between it and the Renaissance gardens I was learning about in landscape history classes, despite Sigiriya having been built more than a millennium earlier. I was also struck by the apparent ingenuity and technical ability of these ancient builders in shaping the land and hydrologic systems. The gardens not only feature fountains that function to this day, but the surrounding area, which is located on the highlands in the central part of the island, features ancient aqueducts used to capture water for agricultural irrigation. 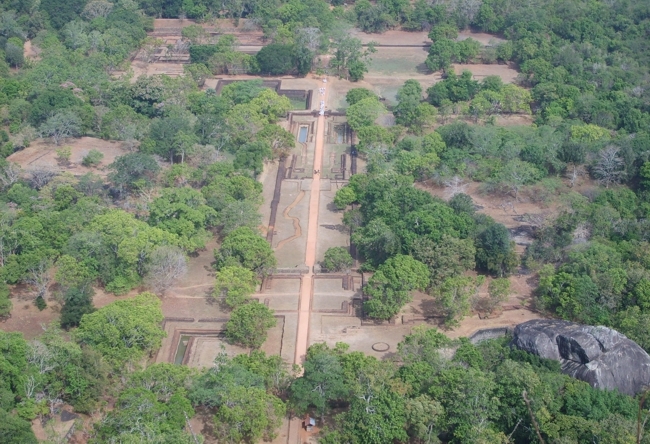 Sri Lanka (formerly Ceylon) is an island nation about the size of Ireland located in the Indian Ocean just offshore from India. It’s most familiar to modern-day Americans for its long-running civil war that ended in May of 2009 and for being the cultural homeland of London-born rapper M.I.A. Sigiriya is a UNESCO World Heritage site located in the central portion of the island. Dating from the fifth century A.C.E., the site has two main sections: the palace/fortress built on a solitary rocky hill that rises up prominently in the landscape, and the symmetrical gardens that lead up to it. The palace/fortress itself is accessible by an enormous set of stairs, and while most of the actual palace is gone, I could still see many of its original elements including its layout, the footings of wall structures, sculptural elements (including paws remaining from an enormous lion sculpture whose yawning mouth once held a staircase), and fresco paintings of royal courtesans. 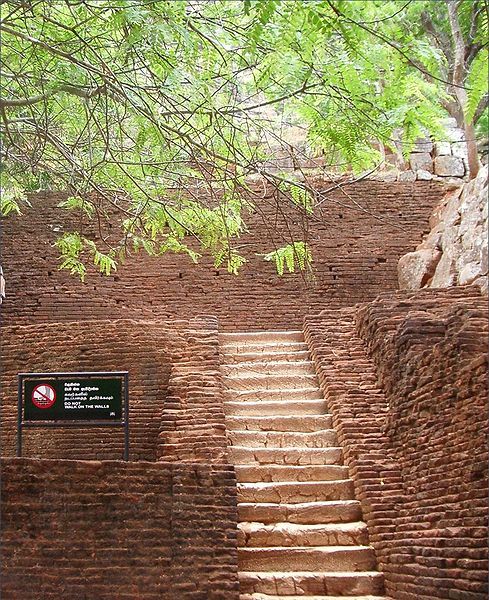 The garden leading up to the fortress is one of the oldest landscaped gardens in the world, and is comprised of three main elements: water features, rock features, and terraces. The garden stretches out nearly 100 yards from the hill on an east-west axis. At the time it was built, it was used not just as a place to experience but as a defensive structure. It features moats that served to defend against potential attackers. Parts of the garden are designed in the ancient Persian char bagh style, and the water features include underground hydraulic systems some of which continue to operate to this day. 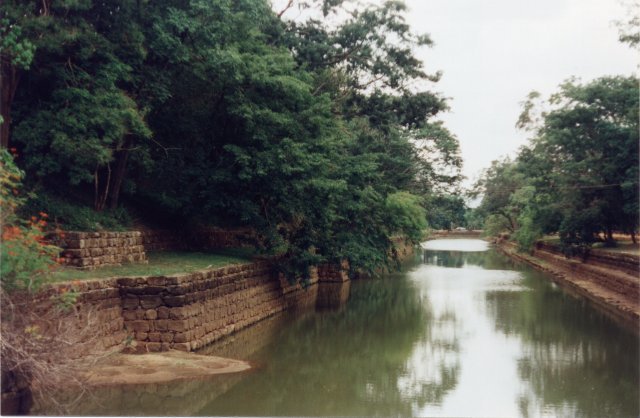 The water gardens are also divided into three main areas. The first garden consists of a section of land surrounded by water. The second is the largest and features a long path flanked on either side by two long pools, both of which connect to serpentine streams. The water features here include fountains that still function. The third is smaller and consists of a large octagonal pool. 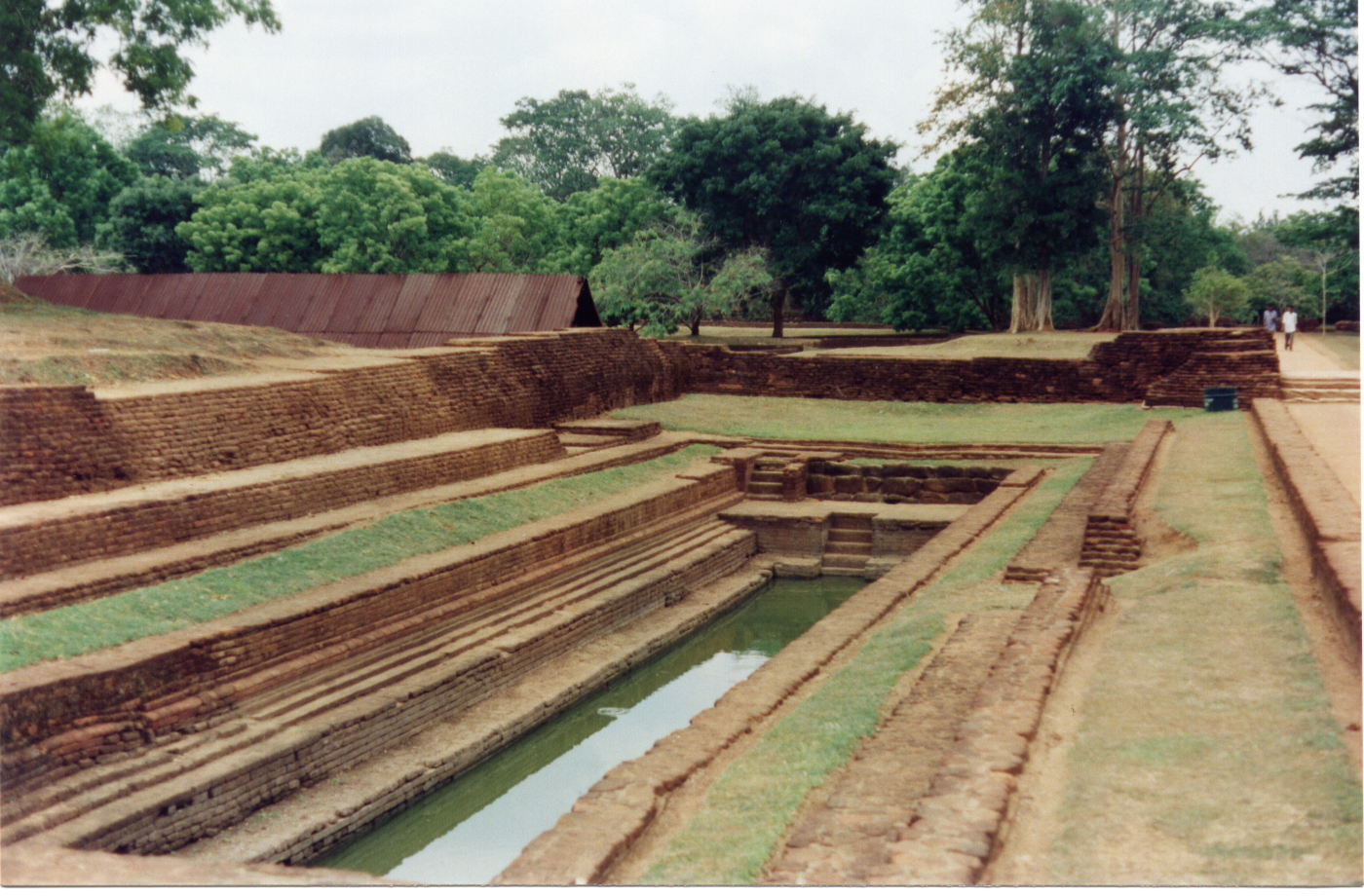 The rock gardens are at the foot of the rock hill atop which sits the main fortress. They consist of several large boulders linked by winding pathways. The large boulders once had buildings on top of them, the footings of which can still be seen. The terrace gardens are built out of the natural hills at the foot of the rock. They feature terraces rising from the boulder garden to the staircases that lead up to the main palace laid out in an approximately concentric pattern relative to the base of the rock. 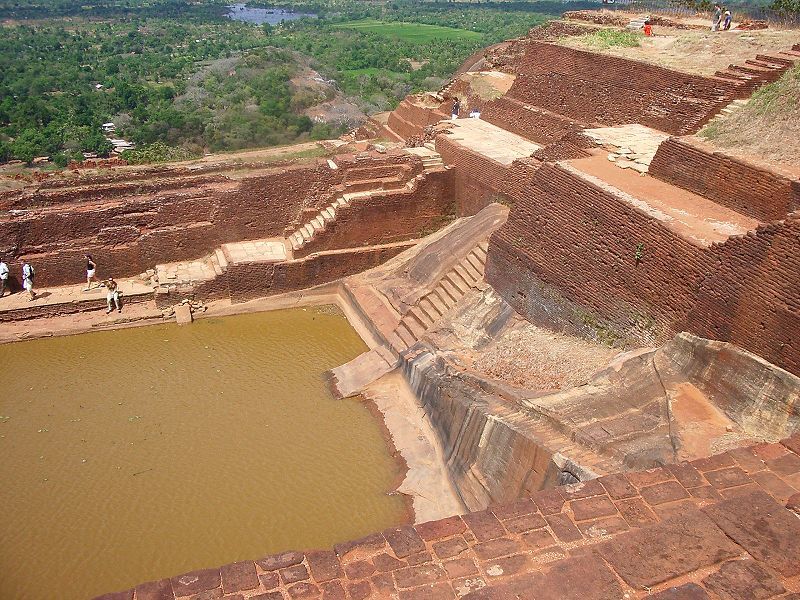 The rock palace of Sigiriya, the gardens leading up to it, and the broader landscape context are worthy of study for modern-day design practitioners. Its layout, its functioning water systems, and the ancient irrigation systems still used to this day are remarkable, considering that they are for the most part more than 1500 years old.