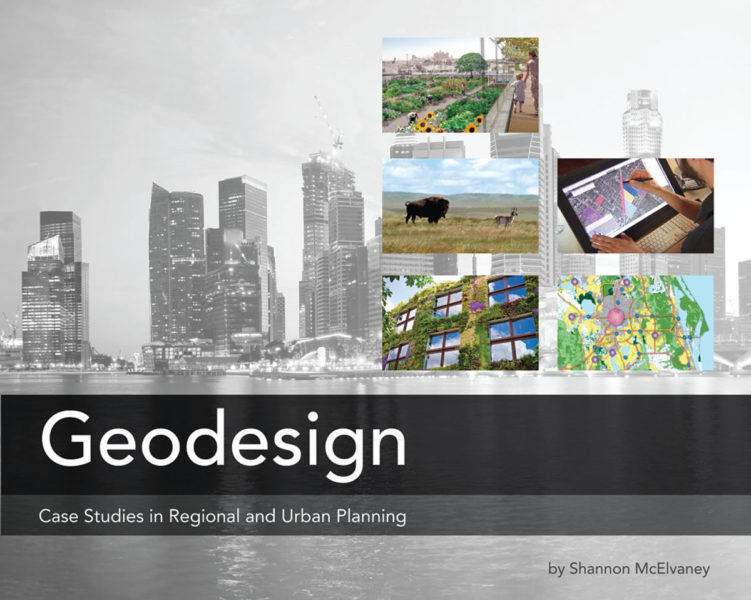 In recent years, Esri, publishers of the ArcGIS suite of software, has been promoting a concept called geodesign in an attempt to meld the geographic disciplines withe the design disciplines. So far, the results have been mixed, at least in terms of how well it has caught on. While it has yielded a certain amount of attention in the design disciplines, many have held that geodesign is simply repackaging existing ideas and practices and is not offering anything new.

So is geodesign something new or is it simply old wine in a new bottle? The answer, according to two recent books published by Esri Press, is a little of both. Shannon McElvaney’s Geodesign is something of a “best practices” book that provides an overview of some recent/cutting edge projects in which Arc software has been used to achieve sustainable results in the built environment. The second, Carl Steinitz’s A Framework for Geodesign: Changing Geography by Design provides an elaborate (possibly visionary) framework for how the process of design should best be conceived. 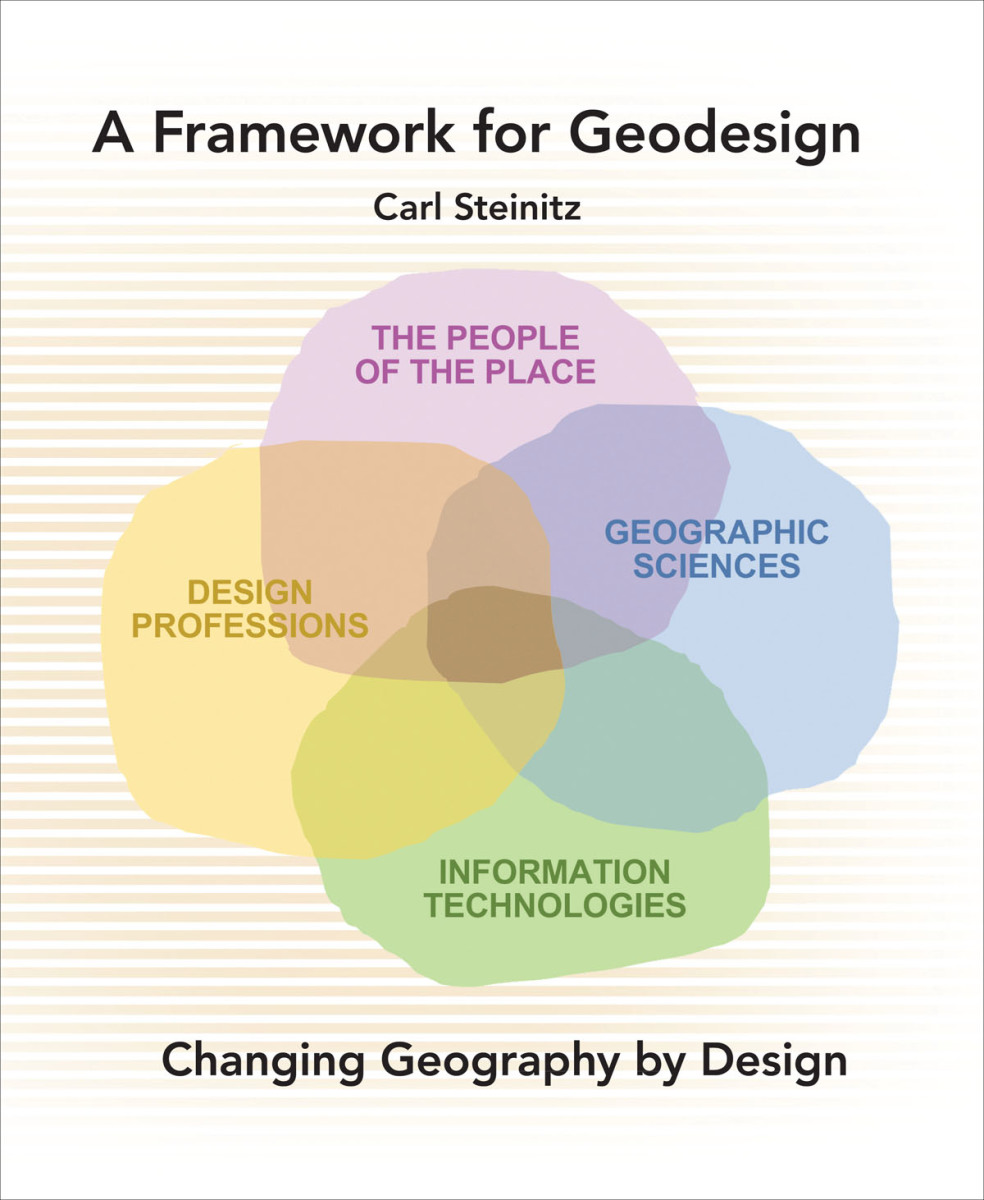 Mcelvaney’s text is the more concrete, easily defined and approachable of the two, in that it’s largely an illustration of a series of case studies of how GIS technology has been used to support sustainable design and development. An introductory chapter gives a general background and overview of the topic, in which McElvaney states that Geodesign is both nothing new and something different, in that changing geography by design has been happening for eons but that Geodesign is an update of that. The remaining chapters consist of case studies of sustainable approaches to design and how Esri’s technology is currently being used to advance the goals of sustainability. 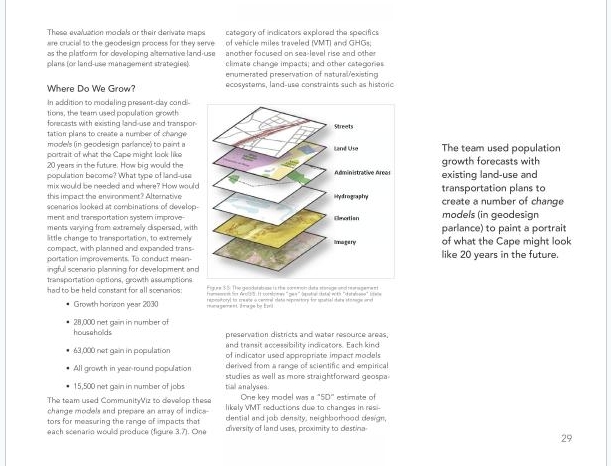 Steinitz’s text is the more abstract and intellectually sophisticated of the two, in that it explicates the process of an approach towards collaborative design rather than focusing on the design themselves. In fact, calling it a text on Geodesign may be slightly misleading. It’s really a presentation of an approach to design that Steinitz, a professor emeritus at Harvard, has been teaching in the classroom for nearly 35 years entitled the landscape change model. In short, it is Steinitz’s long-extant landscape change model adapted for Esri’s Geodesign advocacy that has been influential to a generation of landscape architects and designers, including the development of Esri’s software suite. 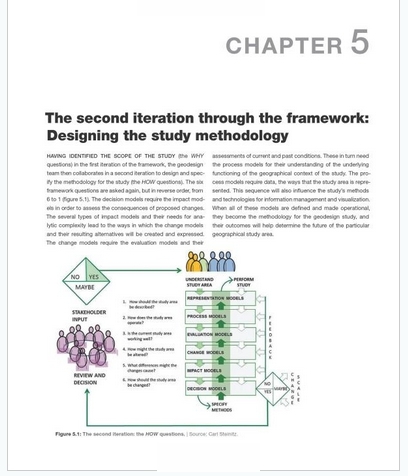 What is confusing to many designers about Geodesign is that it does not necessarily make one a better designer in the sense of producing a more aesthetically pleasing site. What it does is highlight how GIS technology and its informational and analytical capacity can be used to inform and enhance design, whether that’s mitigating environmental impacts or collaborating with fellow design professionals. While both texts are informative, and both state that geodesign is both nothing new and something different – an up-to-date spin on ages-old building practices – neither really makes a strong argument as to why geodesign should necessarily be considered a distinct activity from previously existing sustainable design and building practices. 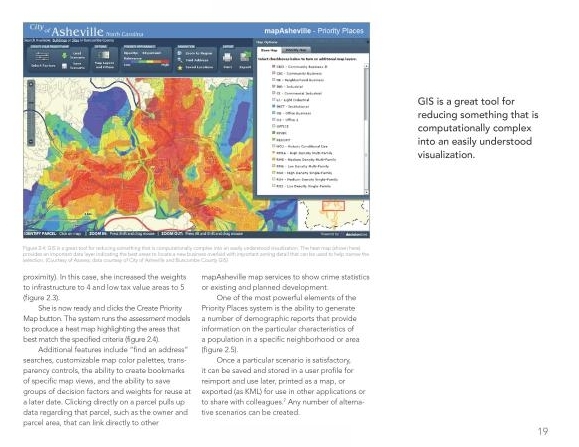 Geodesign or not, Steinitz’s text is invaluable in that it puts on paper an elaborate and influential design model that heretofore was only accessible to students at the Harvard Graduate School of Design. McElvaney’s text is useful for being a set of best practices for how GIS technology is being incorporated into sustainable design efforts. Whether or not geodesign is worthy of its own distinction or is merely a marketing term used to draw more people into the practice of sustainable design has yet to be seen.