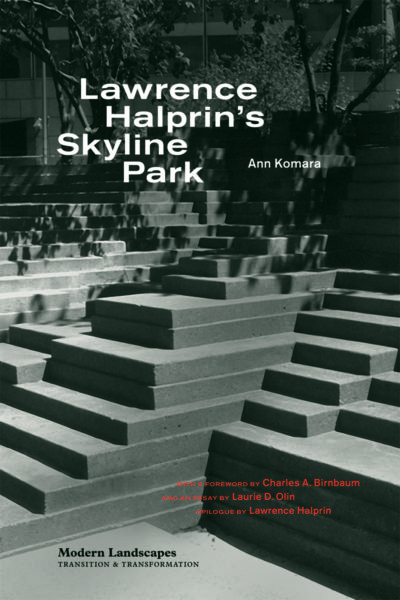 The big recent news from the world of preservation is the listing of Peavey Plaza on the National Register of Historic Places. This Paul Friedberg-designed space is also the subject of a lawsuit brought by The Cultural Landscape Foundation (TCLF) and Preservation Minnesota against the city of Minneapolis, which owns the site. You can Google for all the gritty details, but suffice it to say that Peavey feels a little like a line in the sand for TCLF. And, one could argue, rightfully so.

Former Landscape Architecture editor William Thompson wrote in 2005 that, “Built works by modern masters have been dropping like nine-pins all over the country.” Friedberg is one of those modern masters. So is Lawrence Halprin. We all know Lawrence Halprin: Freeway Park, the FDR Memorial, the Auditorium Forecourt Fountain in Portland, Skyline Park. If you haven’t actually visited any Halprin works, these are some big ones worth seeing. Except you can’t see Skyline Park any more. It was, to crib Thompson’s metaphor, bowled over in 2003 and, to quote him directly, “replaced by [a] more acceptable, if terminally bland, design.”

Thompson is quoted in the recent book with the Google-friendly title Lawrence Halprin’s Skyline Park by Ann Komara. She’s a landscape architect who teaches at the University of Colorado at Denver. The book is a post-mortem on the titular Denver landscape, which was built between 1972 and 1975. Komara is joined by some heavy hitters: there’s an essay by Laurie Olin, an epilogue by Halprin himself (his final published essay), and a foreword by TCLF’s Charles Birnbaum. Yes, this is a TCLF vehicle: the first in a series called “Modern Landscapes: Transition and Transformation.” 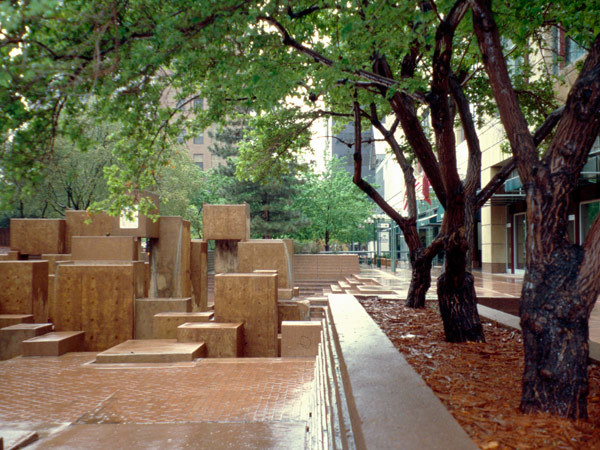 Used with permission. All rights reserved.

When I first picked up the book, this concerned me. Not that TCLF isn’t doing good work. Its just that my fact-finding hackles get on guard whenever I encounter a single-issue source or organization. I worry about credibility. Was this going to be another preserve-it-or-else propaganda piece?

It’s not. The book is a measured and factual visit to Skyline Park and into the Halprin studio during the design process.  Komara’s prose stays firmly away from the persuasive (until the very end, that is, when she lets loose some obviously pent-up frustration). Instead, she takes you on a journey, block by block, detail by detail, story by story. Dozens of photos, sketches, construction details, plan drawings, and pattern studies appear in the book. There is even an image of a project management board from the Halprin office.  “The demolition of the park has resulted in an untold loss—an erasure of urban memory,” writes Komara. “Fortunately, images and records of the park are preserved….”  And now those images, records, and stories are collected in one place. 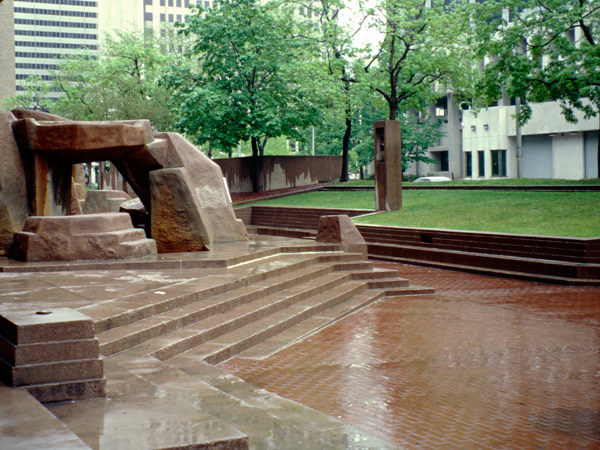 Used with permission. All rights reserved.

I ran into Charles Birnbaum at the ASLA meeting in Phoenix and we talked briefly about the book. He admitted that it was a natural project with which to start, since the memory is still fresh and the discussion was vibrant. But he said the series would not limit itself to landscapes already gone. According to him (and the back of the Skyline book) Pittsburgh’s Simonds and Simonds-designed Mellon Square is next on the list—and that masterwork is undergoing a restoration, not a replacement.

As a resident of Minneapolis, I hope Peavey gets its book, too. Whether that will be a post-mortem like Lawrence Halprin’s Skyline Park remains to be seen.  Either way, books like these are necessary additions to the understanding of landscape architecture. Documentation of the masterworks will always be important. This is our legacy. It is a worthy project.