Article by Alexandra Wilmet PXATHENS by Buerger Katsota Architects, in Athens, Greece. In the education of a child, the discovery and exploration of nature and the environment are key elements to developing creative capacity and imagination. It is essential that our children can enjoy diverse play areas where they can draw inspiration, develop their team spirit, and socialize with the outside world. Unfortunately, playgrounds are often similar to each other. They rarely fit into their environment and are sometimes dilapidated. It is with the aim to remedy this lack of character that the project PXATHENS is taking place in the Greek capital; to offer young and old creative playgrounds, safe and accessible to all.

The idea to re-integrate the game into the streets of the city comes from an initiative of the organization “Paradeigmatos Harin” that has developed, in collaboration with the municipality of Athens, the PXATHENS project. This project involves six degraded and abandoned spaces in downtown areas. The office in charge of the restoration of these spaces defines a development strategy based on seven principles:

The last of these is an interesting element because it allows links between different sets of spaces to create the harmonious development of these spaces within the city. Young and old like to explore the related areas which are scattered throughout the city. Other aspects of the project are not any less important. Providing zones with multidimensional activities allows children to discover the space and operation of various games.

A Space For All Ages Another highlight is the significant principle that the project is for all ages! Even if children are the majority of users of playgrounds, it is important that adults are not neglected because there is no age at which the development of the imagination stops. Perhaps you seen people practicing parkour or enjoying a street workout? These two new disciplines were born from the apprehension of space by using it in innovative ways.

Getting Fit in Urban Space

On the one hand, parkour is a physical activity that involves moving freely in space and especially where there is no set path. Urban objects are transformed into obstacles that must be overcome smoothly. Parkour participants develop a large capacity for running, jumping, climbing and balance. On the other hand, the street workout is using street furniture to build muscles. And although in some places the infrastructure is dedicated to the sport, it can also be done anywhere with the usual furniture such as benches, lampposts, etc. 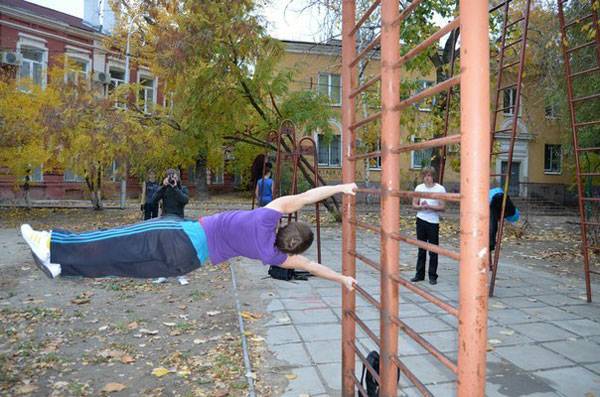 Six Identities in the City

But back on topic; the PXATHENS project is defined at six sites and there was never a question of drawing the same playgrounds in each place. Indeed, one of the seven principles is to give a distinct identity to each of the reallocated areas. The team in charge of the project identified a specific characteristic to each area which would become the predominant criterion for its unique identity and to serve as a reference. The presence of six properties; a church on the hill, a parcel at the corner of an urban block, an intersection, an inner courtyard whose entrance is hidden, an area of dense vegetation, and a location which refers to an ancient grove permitted these spaces to be named, respectively; Six Thresholds, Hill’s Plateaus, A Lot, Three Corners, Secret Garden and Forest Square.

When we discover the place, we first notice the intriguing furniture. Indeed, the elements constructed for the project come in various colors and shapes; sometimes strange. The benches are circular shapes in concrete. They allow users to rest in the shade of the trees that encircle the space, but also represent an opportunity for sharing and creating social ties.

Other more abstract elements awaken your mind and imagination; it’s up to you to decide how to use them. Whether to climb on, to balance, jump, play hide-and-seek or just sit, this furniture leaves you free in your choices. This project calls into question the use of standard playgrounds but also the use of public space in general. Indeed, without transforming the city into a giant playground, this project helps to inspire people to explore the city, to go to experience various sensations through these six areas.

Most importantly, the project allows us to rethink the space in the more playful and creative way in which children learn to observe, communicate and develop their physical and mental abilities. Young and old can now enjoy the public space and appreciate it fully! What do you think of this method of design? Let us know in the comments below! Go to comments