Ceramic Museum and Mosaic Garden  by Casanova + Hernandez Last year, the city of Jingzhou, in northeast China, played host to the 2013 World Landscape Art Exposition. Formerly a shrimp farm, the site of this large-scale international exhibition now serves as a 176 Ha central park for the city. The exposition incorporated 20 gardens designed by 20 teams of international landscape architects. Designs were sought to be symbolic and unique, linking both the garden culture of the design team’s region and the history and culture of the Jingzhou region to the future. Rotterdam-based firm Casanova + Hernandez’s Ceramic Museum And Mosaic Park was one such design, and was featured in our Top 10 Projects of 2013 article. 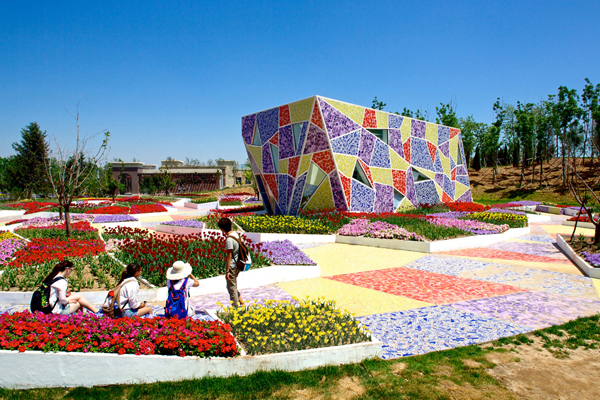 The Concept As the name suggests, the design team found the archaic tradition of mosaic art as a driving catalyst in the design. Functional yet florid, mosaics have been a principle form of expression throughout history and can be traced back thousands of years. The project experiments with what Casanova + Hernandez dub “cultural hybridization” — in essence being the merging of Eastern and Western cultural exchange, a practice developed through centuries of prosperous trade.

Primary components of the design; image courtesy of Casanova+Hernandez architects

Materialization And Design To facilitate this connection, the project coalesces a skilled interpretation of traditional European mosaic techniques with the Jingzhou region’s historical past of porcelain production. The Roman Empire was responsible for the prevalent use of mosaic art throughout Europe — the design calls forth this decorative tradition through the eloquent use of broken pieces of recycled ceramic tiles from the region to adorn the pavement, benches, and frontages of the museum building. Apposing this European cultural reference is the geometric rigidity of the park, referencing the iconic “crackled glaze” of delicate 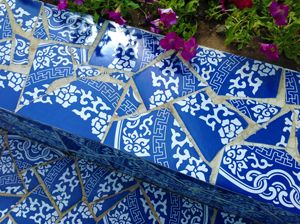 Chinese Longquan porcelain developed from the 10th century on. The irregular surface of the garden and museum combines 884 sections of monochromatic flowering and recycled ceramic tiles, creating a vivid and multidimensional topographical landscape. The repetitious use of these vegetal and ceramic surfaces from the ground plane up integrates landscape and architecture, establishing a strong visual consolidation between two elements that far too often are at variance. Through this clever reusing and recycling of materials, the designers have not only interlinked two culturally rich traditions, but also the concepts of landscape as art and sustainable garden design. 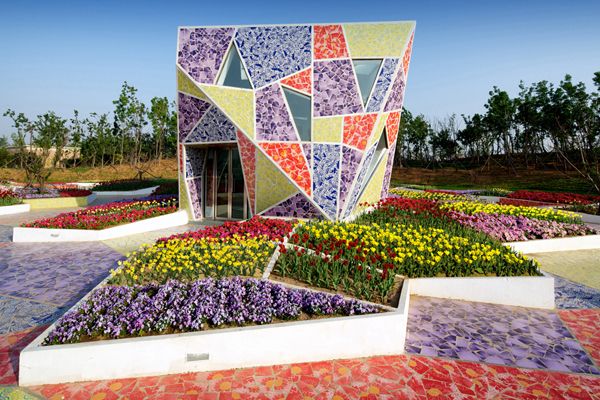 During the 2013 World Landscape Art Exposition, the ceramic museum housed photos, drawings, and various pieces of ceramic art. The building now acts as a multipurpose structure that changes programs over time, educating visitors and citizens on Jinzhou’s forgotten cultural traditions and often exhibiting ceramic and porcelain works from local artists and designers. The Ceramic Museum and Mosaic Garden is indeed visually stimulating, but also serves as a functional public place with the design dimensioned at a humanized scale. Throughout the park are spaces intended for passive recreation and social encounters, with numerous lengthy bench seats embellished with yet more colorful recycled ceramics. What can we take away from this? Unlike many forms of two-dimensional art, the traditional floor mosaic can be viewed from multiple perspectives and thus designed with multiple viewpoints. Onlookers are able to walk around and/or over the artwork to create a new scene. What I think is great about the Ceramic Museum and Mosaic Garden is that the designers have taken the concept of mosaic art, but turned it into a three-dimensional landscape that spatially unfolds wherever you glimpse. Below: Don’t leave this article without seeing this fun and unusual video taking you from concept to realization; enjoy! Unfortunately, many of us believe that mosaic art is all but ancient history, something belonging in antiquity. But it still does have a real place in today’s contemporary places and spaces, this project being living proof. Project Name: Ceramic Museum And Mosaic Park Location: Jinzhou, Dalian, Liaoning, China Client: Jinzhou World Landscape Art Exposition Designers: Casanova + Hernandez Construction Year: 2013 Article written by Paul McAtomney Published in Blog