Freundschaftsinsel Potsdam, POLA, in Potsdam, Germany. Sitting between the Alte Fahrt and Neue Fahrt waterways in Berlin is the Freundschaftsinsel, which translates to “Friendship Island”. Freundschaftsinsel is located in the historic center of Potsdam, where old castles, gardens, and parks are waiting to be explored. Friendship Island is a local favorite, and a beautiful place to spend an afternoon. It is home to many little parks and garden areas, one of which was a botanical center started by none other than Karl Forester, famous for his work with perennials and the namesake of Calamagrostis x acutiflora, or Feather Reed Grass. An open theater, a children’s play area, and a popular coffeehouse are also attractions within the island.

A competition was held to re-design an entrance to the islands’ parks, and the winner was the firm POLA (Permanent Office for Landscape Architecture) of Berlin. 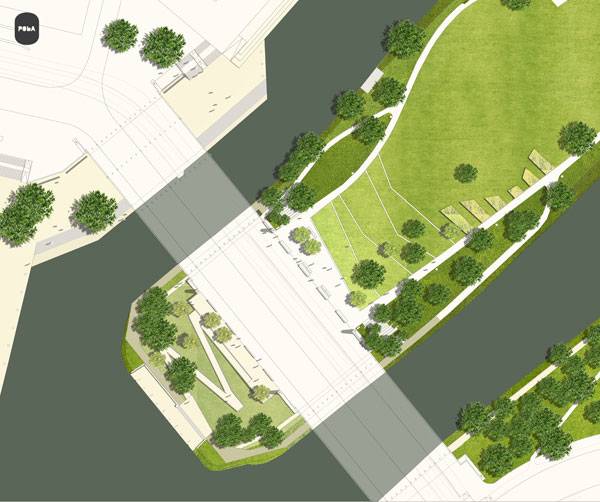 The New Face of Freundschaftsinsel

POLA landscape architects proposed a new design for the site in 2006 and the project had its grand opening during the summer of 2010. The design for the new entrance of Friendship Island is simple — but simplicity is not a bad thing, nor does it mean that little effort went into the design. The design was planned in a way that creates a sense of openness that leads visitors into the area. The transition from the new entrance to the rest of the island is effortless, and minimal disturbance of the original site worked to preserve the history that makes Freundschaftsinsel so special to Berlin. 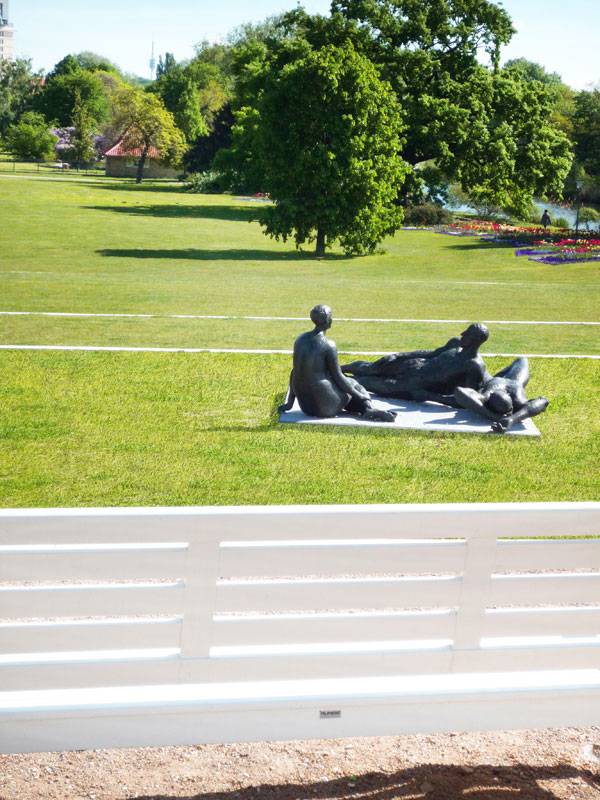 Walkways Throughout the Park

Walking up to the entrance, you are greeted by a small plaza space on the upper level. Steps then take you down to other plaza spaces and walkways that meander through the park. With water on both sides of this island park, the walkways become more like boardwalks, where you can walk right against the water’s edge. 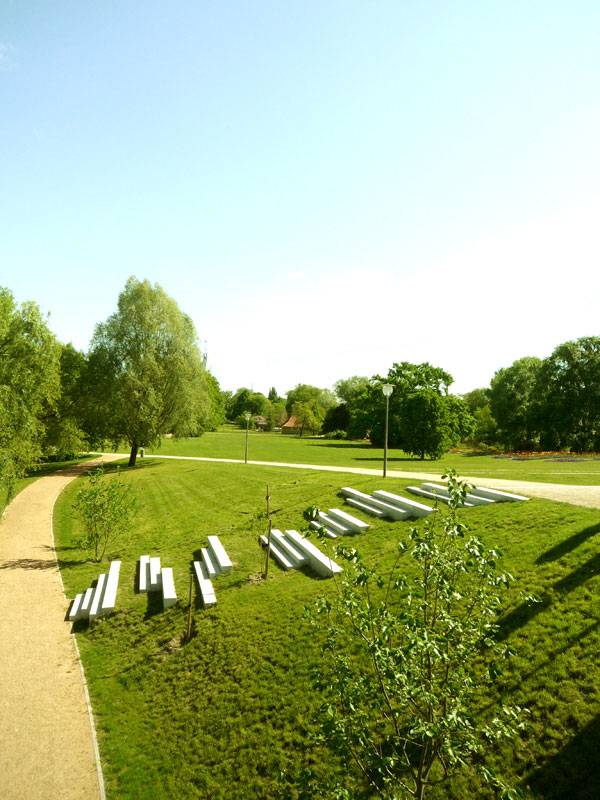 Though the walkways provide a clear path through the park space, there are also terraced areas with concrete steps, which appear very bright to the eye when compared to the green grass on which they sit. These steps and linear design pieces placed in landscape design are found in a lot of modern design. The linear quality makes for a clean and simple look, but still stands out enough that visitors may be inclined to wander over and relax, or stray from their usual path along the designated walkways. 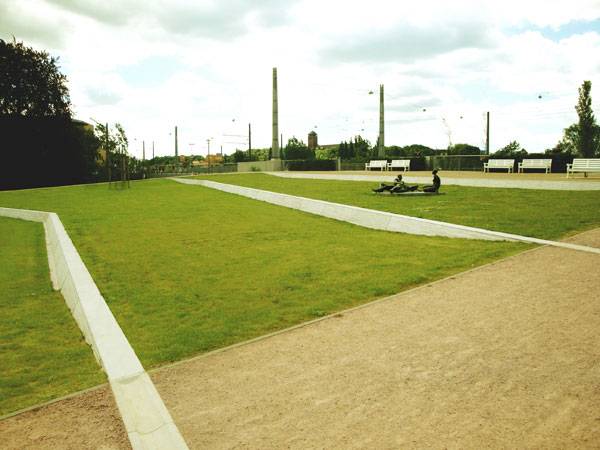 The variation in materials is subtle in the design, but the texture changes create a more attractive and thoughtful look to the eye. The walkways are a neutral tan tone, composed of light gravel, while the plaza spaces have a rustic cobblestone appeal. The furniture placed in the plazas include concrete seats shaped like asterisks, making for plenty of seating options and providing another fun break in texture that is striking to the eye. 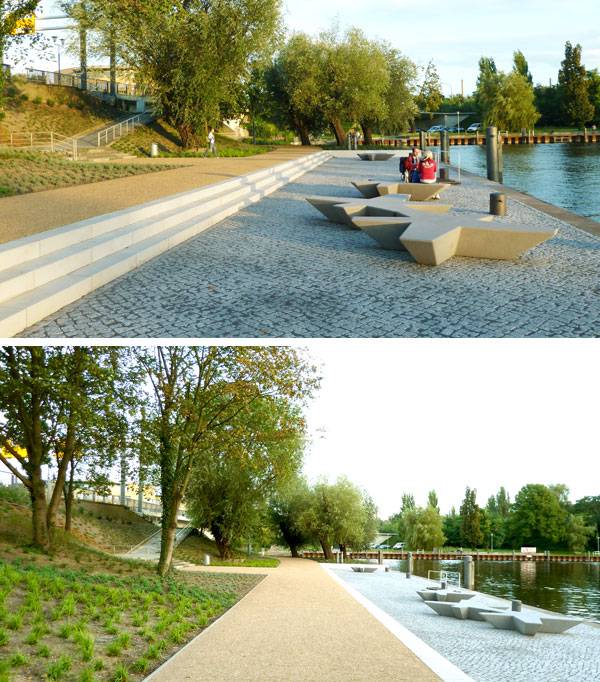 Planting on The Site

Plantings around the site fit with the riparian area. Trees draping over the river are mimicked through the planting of new trees that will grow to create the same effect. Lush grass covers a large amount of the site, occasionally interrupted by riparian plantings in areas near the river or entrance space.

Why is This Site So Popular?

Site projects such as the new entrance to Freundschaftsinsel are important for keeping urban areas healthy because of the focus they place on parks and recreation. An emphasis on people, recreation, and open space makes for a happier and healthier community. Through the creation — or in this case, the renewal — of a park space, visitors and locals are given the opportunity to change the way they spend their free time. Just like how universities almost always have a quad or internally located gathering space, a city should have at least one great park. The fact that Friendship Island is a local favorite is no surprise. 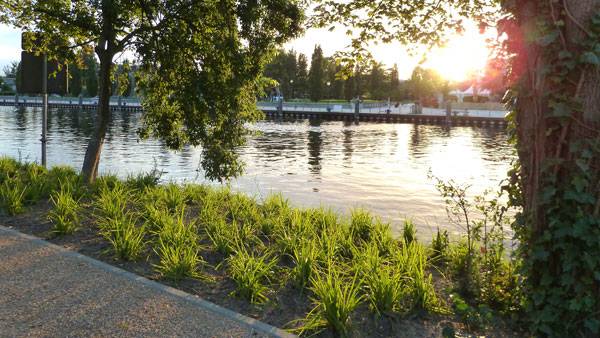 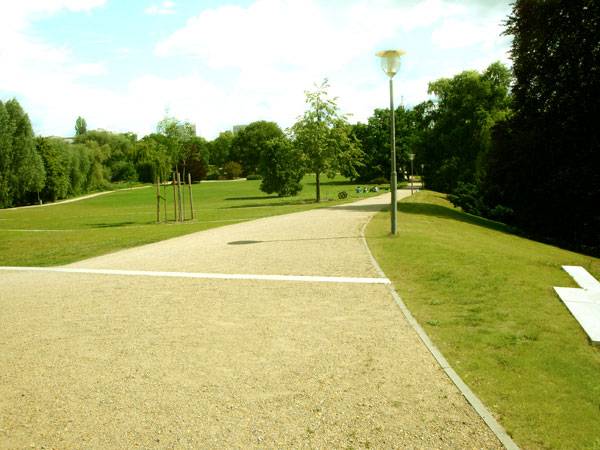 “The Best Parks Tend to be the Simplest Ones”

As odd as it may sound, some of the most successful parks are the ones that don’t try too hard to be the best. The best parks tend to be the simplest ones — spaces where activities such as walking your dog, riding a bike, and spending time with friends are all easy to do because the space has been left open for you to define. Open grass areas are inviting, much like the ones on this site, and are popular for picnicking, basking in the sun, and even studying. 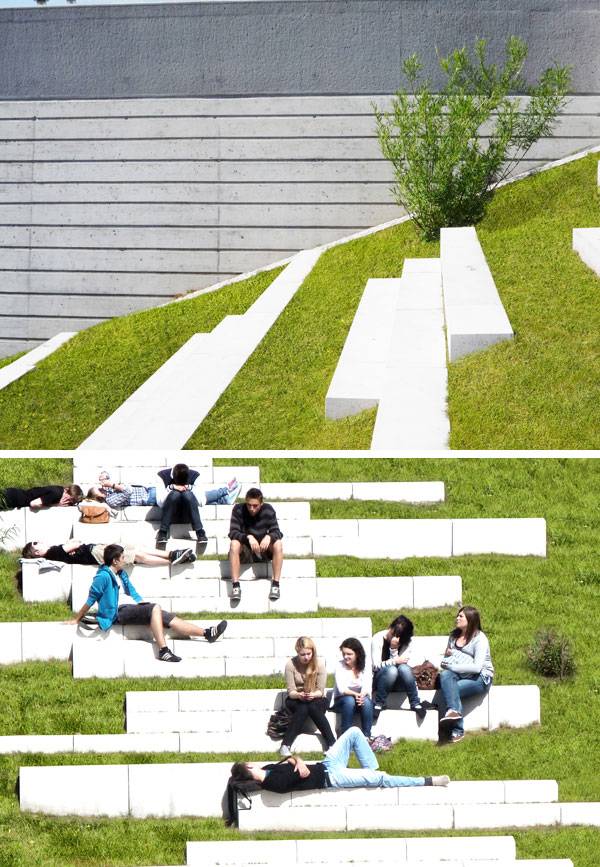 Long, wandering paths are appealing and leave people wanting to walk a little longer, explore a little more. Plaza areas facing the water have also made the site successful, in that they act as a place for rest and socialization, as well as the host to a tranquil view. The terraces within this site add another unique dimension to the park, giving plenty of opportunities for sitting with friends or on your own, in the grass or along a seat wall. When walking through a park or other public place, we all eventually want to seek out a place to relax, and Freundschaftsinsel has made sure that wherever you wander off to, there will be a place for that. Is simplistic design the key to success in public places?