Confronted with the challenge of constructing a green, oasis-like park in a desert climate, Heatherwick decided to embrace the vernacular topology of a cracked desert floor, setting the park’s green space 20 meters (65 feet) underneath a series of fractal-shaped roof structures supported by large columns.

“The project evolved as a series of cracked pieces of the desert surface raised on columns to form a gentle dome across the site. These elevated pieces create a perforated canopy of partial shade under which a lush garden can grow, protected from the harsh excesses of the hot desert sun,” the design team said in a statement. “This sunken oasis becomes a landscape of plants and mature trees, forming a series of interconnected public recreational spaces.”
(Related Thread: Not Your Grandmother’s Landscape: Abu Dhabi Plaza)
These new public spaces will include community gardens, recreational areas, a library, and an outdoor cinema, among many other public amenities.
Heatherwick Studio was intent on challenging the dynamic between Abu Dhabi’s existing green spaces and the ecological context of the desert in which they are situated. The traditional European or American-style surface park not only clashes with the desert aesthetically, but is also environmentally unsustainable due to the harsh climate. “By creating partial shade for plants, the canopy reduces the amount of water lost to evaporation, improving the park’s energy efficiency and sustainability. Whilst providing shade in the daytime, the elevated plates also become a network of unique meeting places in the cooler evening hours.” 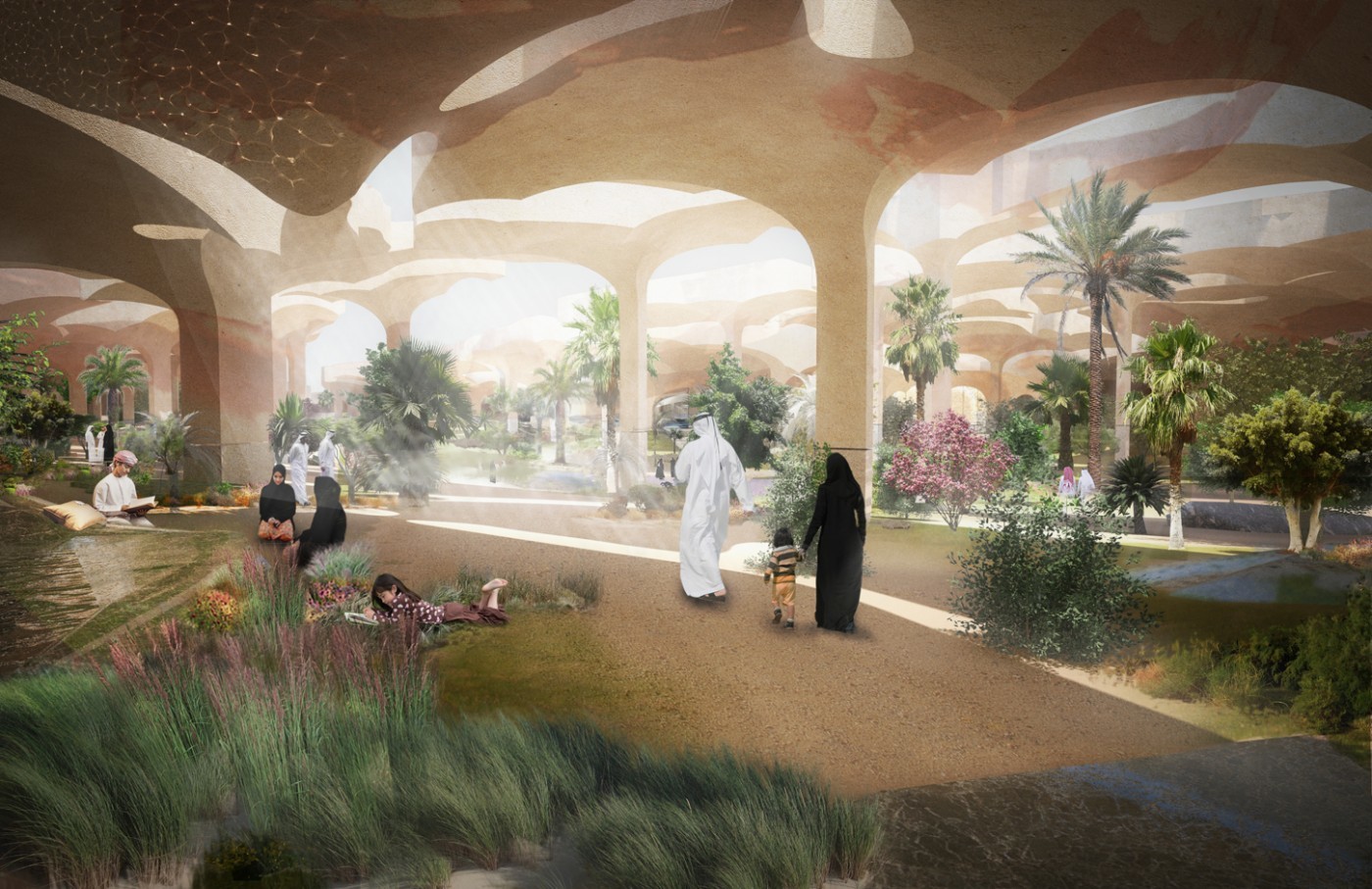 The project statement on the architect’s website begins: “Can you make a park out of the desert?” In Al Fayah’s case, the park is not within the desert itself but under it. Within the gaps left by the cracks and crevices, a lush riparian corridor is revealed, providing cool respite for the desert city inhabitants. A new sensitivity to the local ecology coupled with an innovative, layered design scheme sets this public place apart in terms of landscape design in the Middle East.
(Related Thread: Filmtastic Fridays – Desert Breath: Land Art Installation)
Looking through the project images, it’s easy to see that the construction of this long parkway will be nothing short of a monumental task. The vast webbing of thick concrete, as seen in perspectives looking under the structure, seem at odds with the plain, light landscape palette that a desert environment provides. It’s a heavy design move that creates a beautiful, lush space where otherwise one wouldn’t exist.

Al Fayah is park of contradictions: it’s an oasis and dry, cracked earth; it’s water-sustainable and construction-heavy; it’s part of the desert and apart from it. Despite these contradictions, though, it’s depicted as a place I would love to explore.

What do you think of the design for this desert oasis?
Via dezeen
Images © Heatherwick Studio
Published in Blog