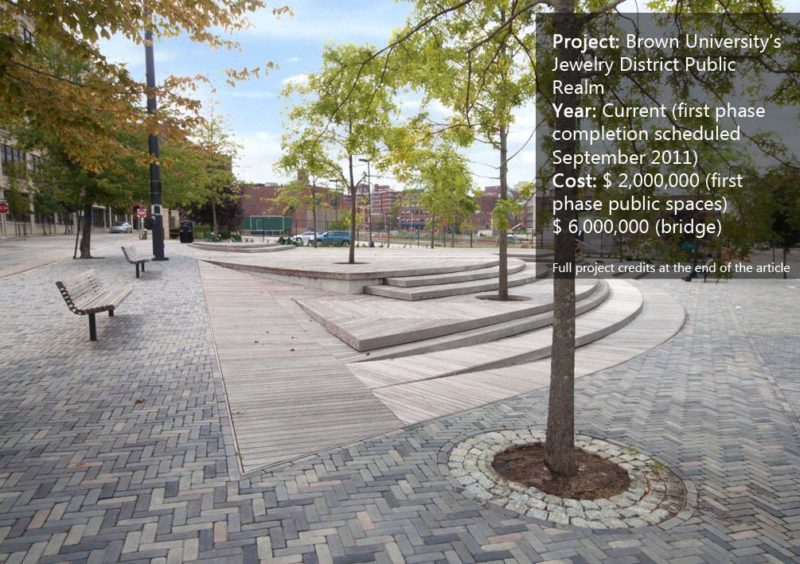 Article by Erisa Nesimi The innovative design of the Jewelry District Public Realm by !melk landscape architects in Providence, Rhode Island, USA Rethinking the design of a public space is not at all easy. You are confronted with a complexity of aspects to be considered, where one of them is sure to be the historic layers the site holds. This is the case of the Jewelry District in the heart of Providence. !melk landscape architecture & urban design shows a first-rate model on how to deal with a comprehensive design in an innovative way. The relocation of Interstate Highway 95 created an opportunity for the Jewelry District to reinvent itself, while also offering a chance for Brown University to expand its Medical School from their current college hill campus into downtown Providence, engaging the riverfront, the neighborhood in their environments.

The landscape architects came up with a design which, other than fulfilling the needs of the university, also becomes a gathering space for people nearby. !melk was commissioned to generate ideas for this project, which was a multi-phase public space master plan. The site includes a variety of spaces, a rich-in-history urban plaza, a waterfront park with a streetscape design and a pedestrian bridge. !melk’s design is comprehensive because it evokes the history of the place. The site is called the Jewelry District, and it used to have a significant role for Providence. It was once a thriving mercantile area with warehouses and manufacturing buildings as well as its own harbor.

Bringing the Pieces of History Together

The designers’ take on the project was, for the most part, about bringing the pieces of history together. For instance, great attention was shown to the connection with the water and its particular meaning to the place. Furthermore, the Jewelry District used to be a magnet point for the city, full of fascinating features such as cobblestone streets and beautiful old buildings which create a cozy atmosphere. Unfortunately, what they found there when they first started the project was a huge, ugly parking lot.

Building a Variety of Spaces and Functions

What !melk studio designed includes a variety of spaces, a continuum of planned and existing environments. It acts as an example of a scattered urban plaza. The three main points are the bridge, the riverbank parks, and the urban plaza in the heart of Providence. The bridge, with its undulating form, not only serves as the connection with the Brown Campus, but also as a public piazza in itself. Besides being a circulatory space, it is an amphitheater with a marvelous view towards the river.

The Bridge and its Innovative Design

This comes as a result of the curvilinear shapes in conjunction with the change of levels in the bridge. Particular emphasis was given to placing the bridge at the last remaining slip of the former harbor; at the eastern terminus of Ship Street – stressing the emphasis on the city’s history. Remarkable is the fact that the bridge is designed on top of existing footings of the removed Interstate Highway 95. The spectacular shape of the bridge produces the possibility for a dynamic public space not only in the bridge, but also along the riverbanks. The designers allocated close attention to this detail by generating design concepts for both the eastern and western banks.

An Inspiring Use of Landscape Materials

Rather than one specific urban plaza, this project is a conglomerate of a variety of urban and landscape elements where each of them holds its own unique character but they’re also interconnected amongst each-other. An essential feature that unites all of the spaces is the consistency of the applied materials, such as the wood decking and the cobblestones. The paving stone is the main representative of the effort the designers have put into the project.

According to them, concrete or asphalt pavement is simply not a choice. Reminiscing Providence’s traditional cobblestoned streets, !melk developed a new pavement product which, with its unique texture and special color, evokes the historic character but also satisfies today’s standards and codes. Nowadays, the “!melk blue®” paver, designed exclusively for this project, has become the new iconic material of the Jewelry District. This paver is ADA compliant and has the ability to hold up to weathering and snow removal.

The Use of Planting in the Design

Greenery is crucial throughout the whole design where trees are present even on the pedestrian bridge. Both riverbanks are treated with green features and the design is so carefully considered in each specific detail, such as the tree grates, which assembled with an eye-catching intricate design, obtained the name “the jewel of the Jewelry District”.

Just when you think that was it with details, you are yet again surprised by the ingenuity of the designers. Also designed specifically for this project and fitting perfectly to their purpose, the lighting devices are another wonderful facility completing the project. Due to their special design, they are innovative and flexible, resulting in an optimal lighting of the space in the night hours.

Events and Activities at the Jewelry District

The square provides a main public space which, just like the old Jewelry District, can host an array of activities such as farmers’ markets, food truck vendors, outdoor film events, and a series of other entertainments.

With great attention to the overall organization, along with particular care for small details, the Jewelry District has become a precedent for streetscape design in historic urban settings. Not only does it recreate a lost history of the site, but it also fulfills perfectly the current needs of people using these spaces. The ability to work in different scales and to generate ideas which fit perfectly to every case shows how wonderful this design is. What do you think of the project? Have you visited it? Would you like to have something similar in your neighborhood?