A’beckett Urban Square, by Peter Elliott Pty Ltd Architecture + Urban Design and Taylor Cullity Lethlean Landscape Architecture, in RMIT at Melbourne, Victoria in Australia.  Conceived as a piece of urban theater carved out of the surrounding of the city, A’Beckett Urban Square is framed by new residential towers, multi-level car parks, and RMIT academic buildings. This urban landscaping pop-up has transformed a vacant site into a vibrant sports and recreational hub for RMIT. Transforming a vacant space into a useful one by using artwork, platforms for sports, and vegetation, and by creating space between spaces, the park adapts its surroundings into a collaboration of ideas, developing creative concepts.

A’beckett Urban Square. Above: Before image, courtesy of Peter Elliott Pty Ltd Architecture + Urban Design. Below: After image (Not at the same angle as above image) Photo credit: 2 John Gollings

A’beckett urban square is a temporary zone which converges different activities into one location. It is accessible not just to RMIT students and staff, but also to the greater Melbourne community, turning this underutilized and derelict space into a publically-accessible 2,800 square meter ‘pop-up’ park. “It’s really meant for active ball games, because there’s really almost nowhere in the city you can do that, apart from what RMIT already has in its campus on Bowen Street.” -Peter Elliott- 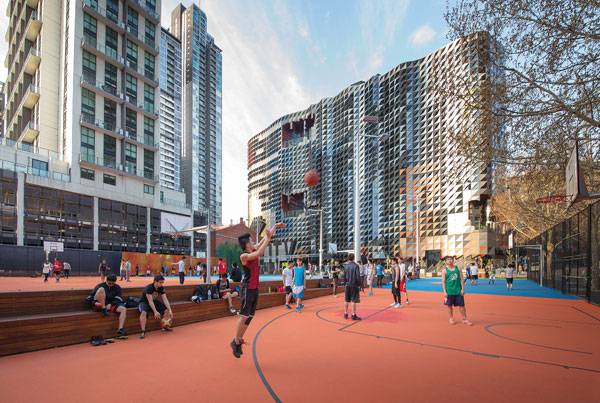 By utilizing this plain canvas, Peter Elliott conceived a continuous flow of space generating spatial zones within the boundaries of the area. It is uniquely interesting how this ‘pop-up’ park could be so interactive and community-conscious. It’s not only a park, it is a space where people can be free of time and just be one with the location. By taking a simple approach to the design, Elliot activated the square with demountable pieces including artwork from contemporary artist Ash Keating who created a large-scale piece called Natural System Response, wherein the verdant green represents the urban forest and the searing red, the desert landscape. See what Other Things Are Happening in Australia: 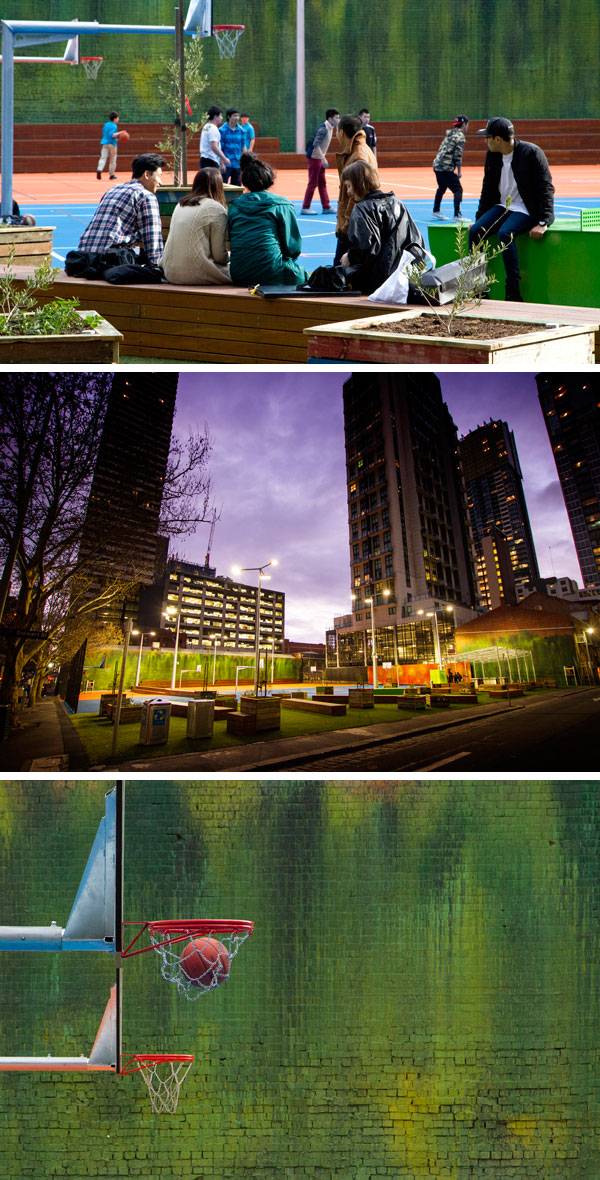 Making a Vacant Space Into a Dynamic and Functional One

Design and creativity meet with simple and clear ideas, making a vacant space into a dynamic and functional one. Putting perspective onto a blank slate allows RMIT University to have an outdoor section that is also pragmatic. Though impermanent, the project managed an outgoing use of the space; people visited and interacted with the setting, making clear that it served its purpose. Turning derelict wasteland into an urban playground, these projects are transforming the way Melburnians engage with their city – however temporarily. 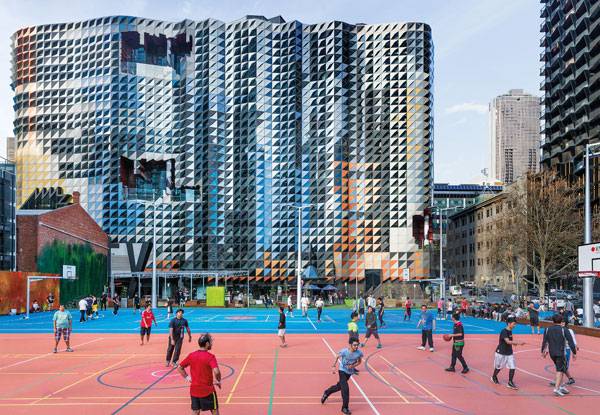 The Impact of a Pop-up Park

This ‘pop-up’ park brought light and contrast to the area, incorporating colors and textures onto the plane; it played well with the buildings giving a burst of fun and playfulness to its surroundings. This piece of living art, at least for me, was simply amazing – bringing people together into one cohesive square, giving them many options to choose from and allowing for contemplation of each zone without overshadowing the others. This park lets the scenery speak for itself, providing a place for having fun while the commotion of the city continued on.

The Result of a Great Collaboration

Making a piece (space) like this was well thought out. Putting the concept together, a gathering of minds connected many ideas into a single one. In the end, they created a continuous surrounding that the people (community) could actually enjoy. That is what I consider a great collaboration between the architect, Peter Elliott, and the RMIT project manager, Liz Davies.

Understanding The Needs of The Users

Taking time to really understand the needs of the city and the people that live there is very important when working on a project, whether it is long term or just temporary. Nevertheless, it is necessary to have an open mind about what works in the area in which the project is going to be built; every detail counts. 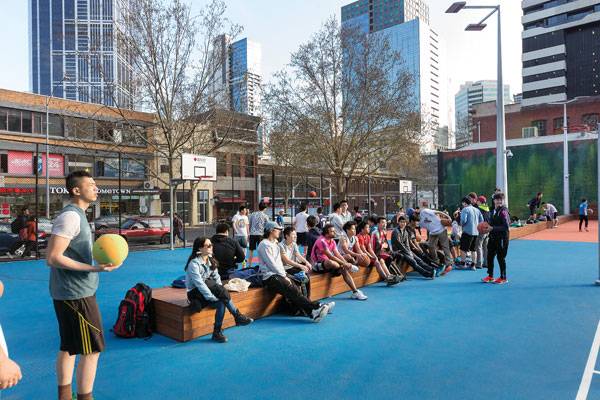 How can one single space have multiple purposes and serve an innovative location? It was done and it worked! Incorporating a demountable area that could be used by RMIT and the rest of the city; that’s how one can bring the city and the people together, connecting every inch of space so it can be put to use by everyone. Though the project was both useful and functional, it was only there for a little while. It serves as a great example of “what can be” for future vacant places in different areas. Let’s take this chance to learn more about the revitalization of spaces, of what can be created. Do not let the fear of, “What if doesn’t work?” stop our minds from trying possibilities in the design of a single place or space in the city. 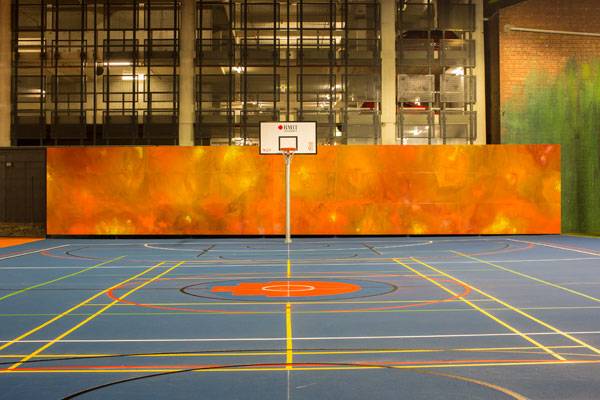 I do believe this was a great way to let people know what can be done, not just here but in other areas just like this: vacant places are all over. I think this a good example for architecture and landscape architecture students to learn about space, its value, the form, and the city. What would you have done differently, if you had the chance to interact with this vacant space? 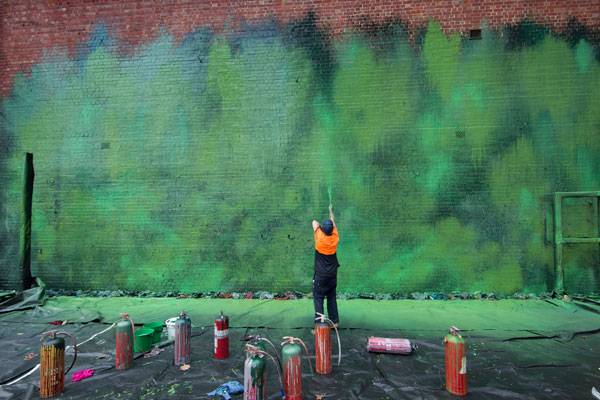