Vancouver land bridge, designed by Jones & Jones Architecture. The biggest of the six installations of Confluence Project, the Vancouver Land Bridge reconnects the Columbia River with Fort Vancouver in the most natural way. A serpentine pedestrian walk full of native vegetation with a strong concept that commemorates the bicentennial of the Lewis and Clark expedition, a journey made from the Mississippi River to the Pacific coast in the beginning of the 19th century. Jones & Jones Architecture and a Landscape Architecture team from Seattle proposed a smooth, elegant and sustainably conscious bridge. The project has been awarded several times, including 2009 Engineering Excellence Grand Award, 2009 Excellence in Concrete Award, among many others. 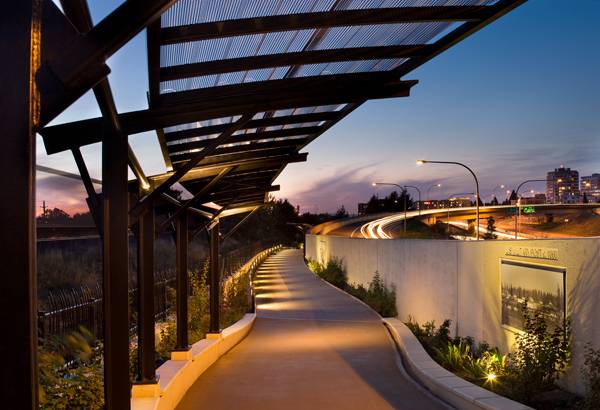 History and Site Overview It all started 200 years ago, when president Thomas Jefferson commissioned Meriwether Lewis and William Clark to an expedition across the (now) western portion of the United States, making the Columbia River a stopping place for these travelers. Archaeological discoveries have revealed artifacts of Native American Cultures, as this path was used by the river-based tribes. Fort Vancouver was also house of the Kanaka Village, the first major multicultural community, it is out of this village that Vancouver, WASH and Portland, OR, grew. 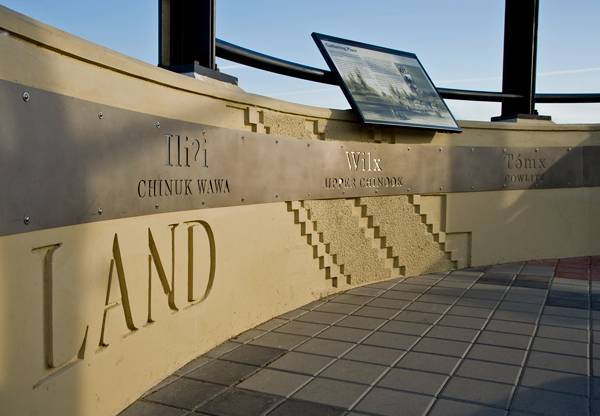 The bridge is located over the six-lane State Highway 14 (SR14) in Vancouver, Washington. Between the Vancouver National Historic Reserve and the Columbia River. The Reserve is surrounded by this Highway and other commercial networks. Renowned artist Maya Lin among other artists, architects, landscape architects, civic groups and Pacific Northwest tribes are collaborating in the development of the Confluence Project; six art installations at key points of the Columbia River system, it was not until the Confluence Project came up that the Land Bridge idea was a possibility. 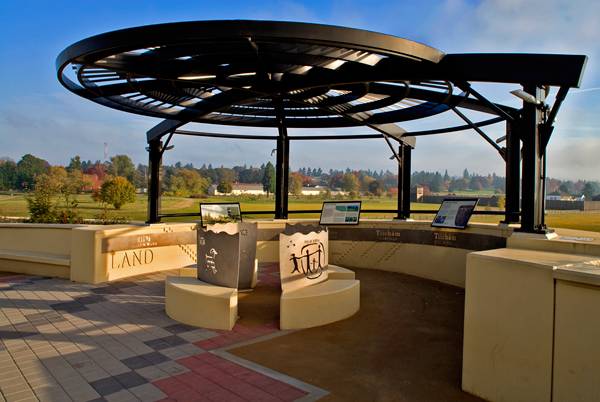 Innovative Solutions The Vancouver Land Bridge is the largest and most complex building in the whole series of the Confluence Project. A historic path that gives you an amazing view of the river and its surroundings. If coming from the south, you’ll walk by Lillian Pitt’s Welcome Gate and two canoe panels with a sculpture of a Chinook’s face, which are placed to reflect the site’s importance as a point of contact between European and Native people. Numerous metal, stone, plastic and timber artworks can be found along the bridge’s path. One of the main goals was to restore the now lost connection between the reserve and the river. Native planting was a neccessary part of the project. 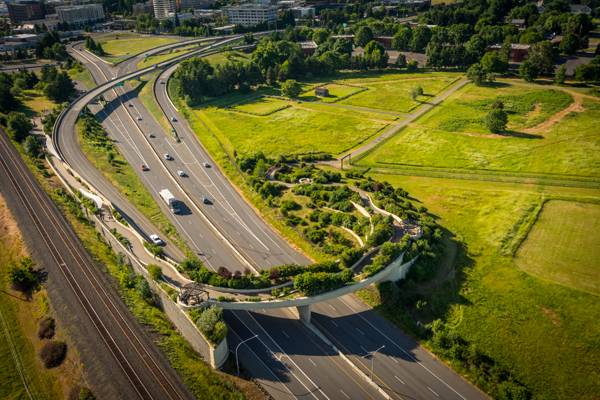 The elegant figure of the bridge makes it really easy to love: a sharply curved, semicircular shape, with no obvious division lines, everything seems to come natural. A lightweight structure supports all the landscaping loads so it can appear slender to the people driving under it. And while on top of the bridge, you can barely feel the presence of the highway. Soffit and end abutments are decorated with a basketweave pattern, so an interesting concept can be seen from every point of the bridge Keeping an eye on sustainability: all rainwater is canalized to an underground storage pipe which feeds the bridge’s native plants and, during dry periods, the Columbia River aquifer supplements the irrigation system. The Structure The project had to overcome many requirements: a slender bridge capable of carrying heavy dead loads from the native vegetation and soils, site limitations and a very complex geometry. 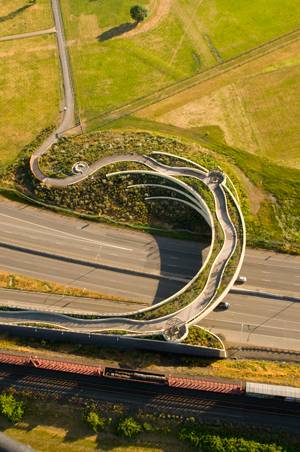 The semi-circle shaped bridge required highly detailed models for a more accurate structural analysis, which resulted in the use of pre-stressed and post-tensioned concrete and a voided deck with CIP upturned edge girders. Getting the curvature was no easy task either, over 20 individual retaining walls were used around the bridge, each wall had its own unique alignment and they were all curved. Also, the transitions between these walls had to be extremely detailed. Planting As it was said before, native vegetation was carefully selected for the project, Red Alder, Pacific dogwood, Oregon white oak gave height to the design, California Oatgrass, Small Fescue, Long-stolon sedge, Slender rush are some of the grasess in the plant palette, while some of the shrubs species were Vine maple, Salal, Oceanspray, Dwarf Oregon grape, among many others. Four different habitats can be found from upland to shoreline. 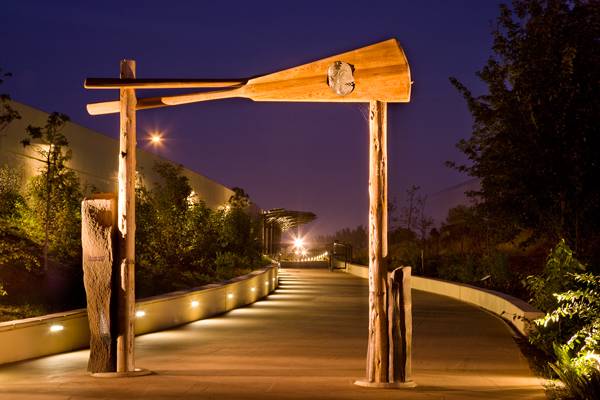 The Vancouver Land Bridge brings together all the elements into one masterpiece, an emblematic icon for the Confluence Project and the city. The path appears as a natural extension of the existing landscape and all patterns, shapes and artworks become an open book of the site’s history. The Land Bridge is a one-of-a-kind experience, creating moments where you can pause and rest to enjoy the view. Recommended reading: Design with Nature  by Ian L. McHarg Article written by Eduardo Reguer. . HOME PAGE Published in Blog