It’s a common problem that’s caught us all out at some point: a dead phone battery and nowhere to charge it. But this frustration could soon be a thing of the past, thanks to a new wave of street furniture that’s sweeping through cities. 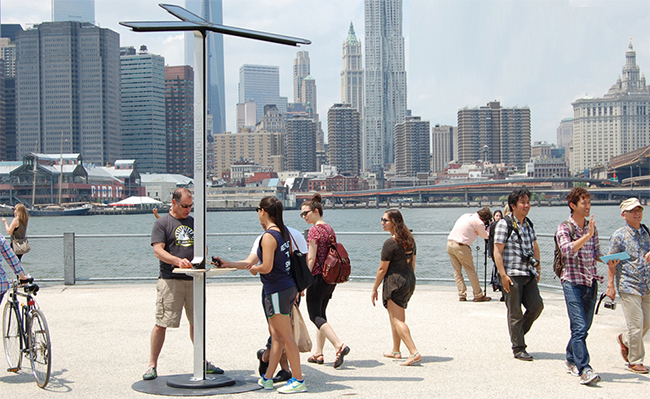 It began in the US back in June 2013 when Street Charge was launched in New York City. Intended to give power on-the-go to any electrical device with a USB connection, the open-air charging stations were installed across NYC by telecommunications corporation AT&T. Designed by Pensa, each charging station harnesses the power of the sun via three 20-watt solar panels. The sun’s energy is stored within an internal battery, ready to give users a burst of power at any time of the day or night and in all weather conditions. Each unit features three micro USB connectors and three female USB connectors, allowing users to connect mobile phones, mp3 players, cameras or their own charging cables. 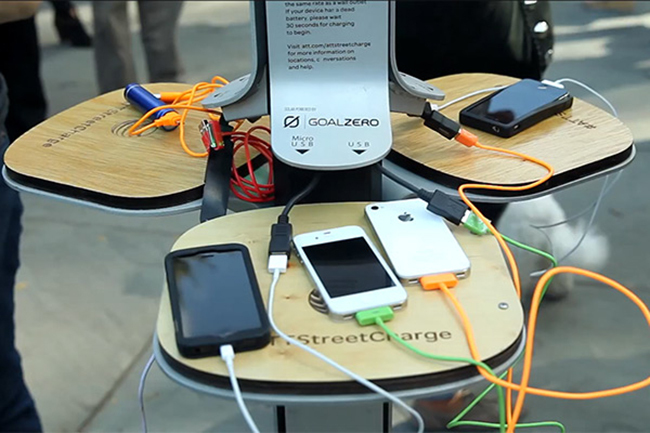 Street Charge can be installed in any outdoor area but is particularly suited to green spaces and public transit stations. It’s also proven to be a valuable contribution to outdoor event spaces and festivals.

In the twelve months since its debut in NYC, Street Charge has become a resounding success. There are now over one hundred Street Charge stations across the US and a whole host more in cities across the world, including London, Amsterdam, Dubai and Sydney.

RELATED STORY: Are smartphones destroying the ‘public’ in our public realm? 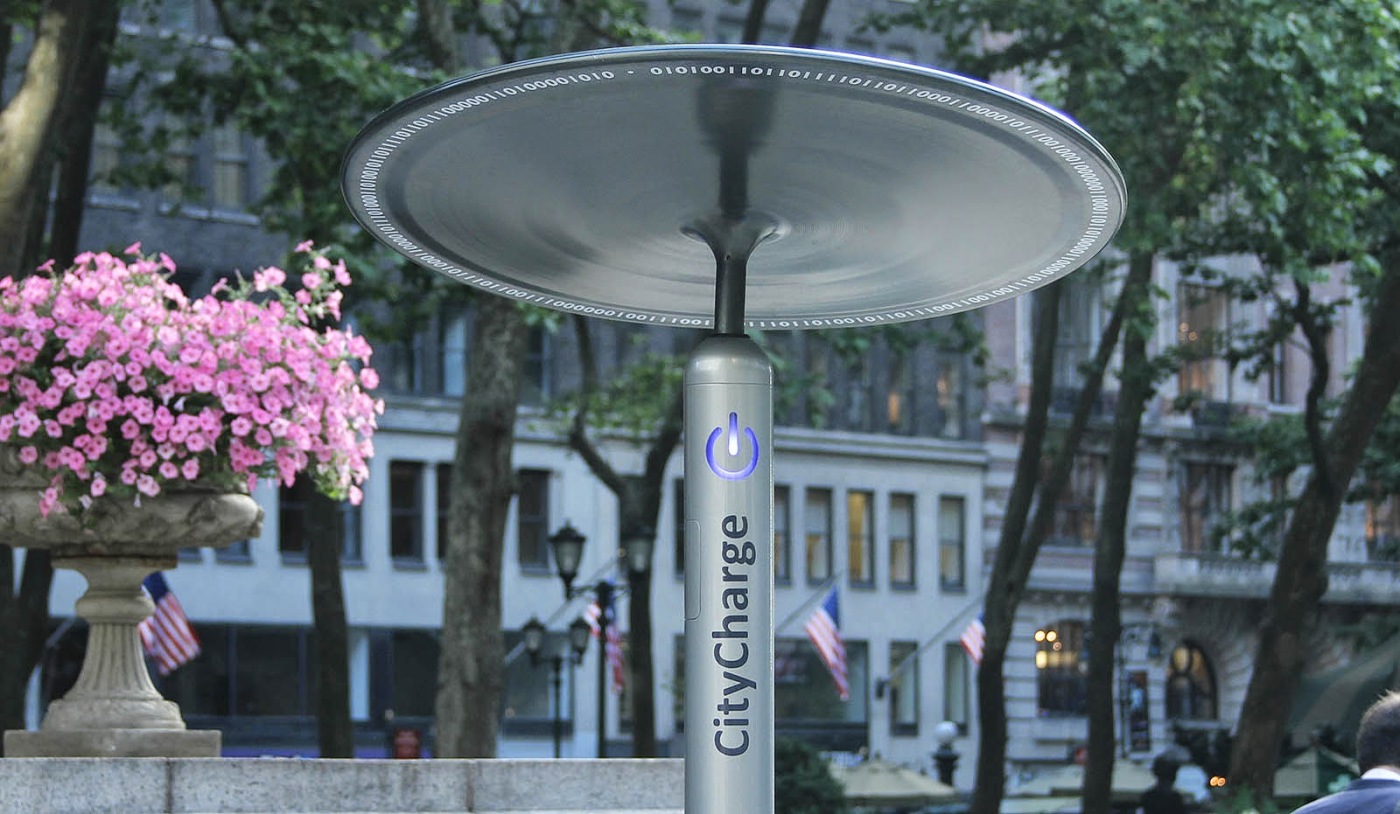 Street Charge isn’t the only one of its kind. A similar product named CityCharge popped up in Bryant Park, New York, last month. The result of a collaboration between Green Barrel Energy and Landscapeforms, CityCharge is a movable solar-powered charging station that can be rolled around the park to work with existing chairs, tables and umbrellas or to make room for events. 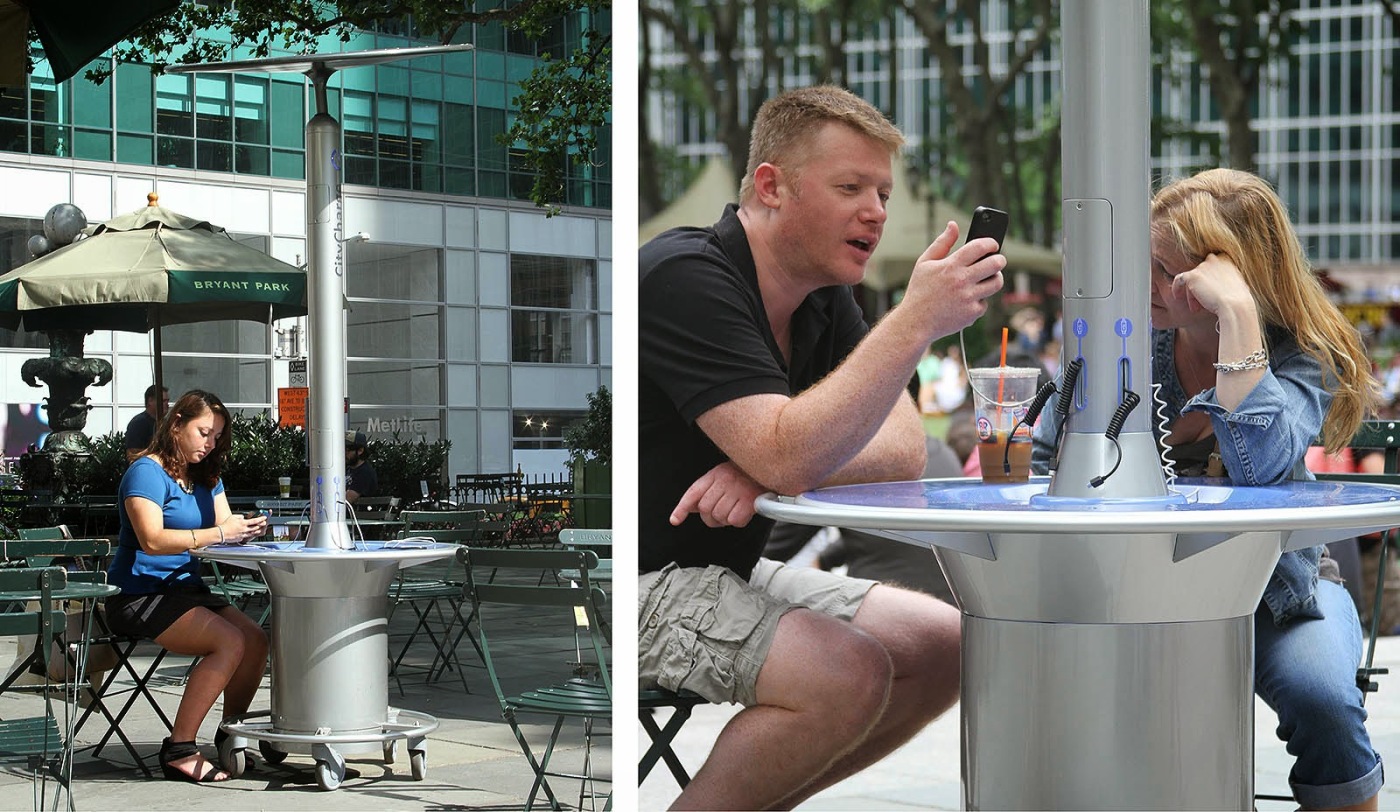 “The design was inspired by people and how they use public spaces,” explains Ignacio Ciocchini, the industrial designer behind CityCharge. “It is round, easy to move, and has a communal table that encourages social interaction.” 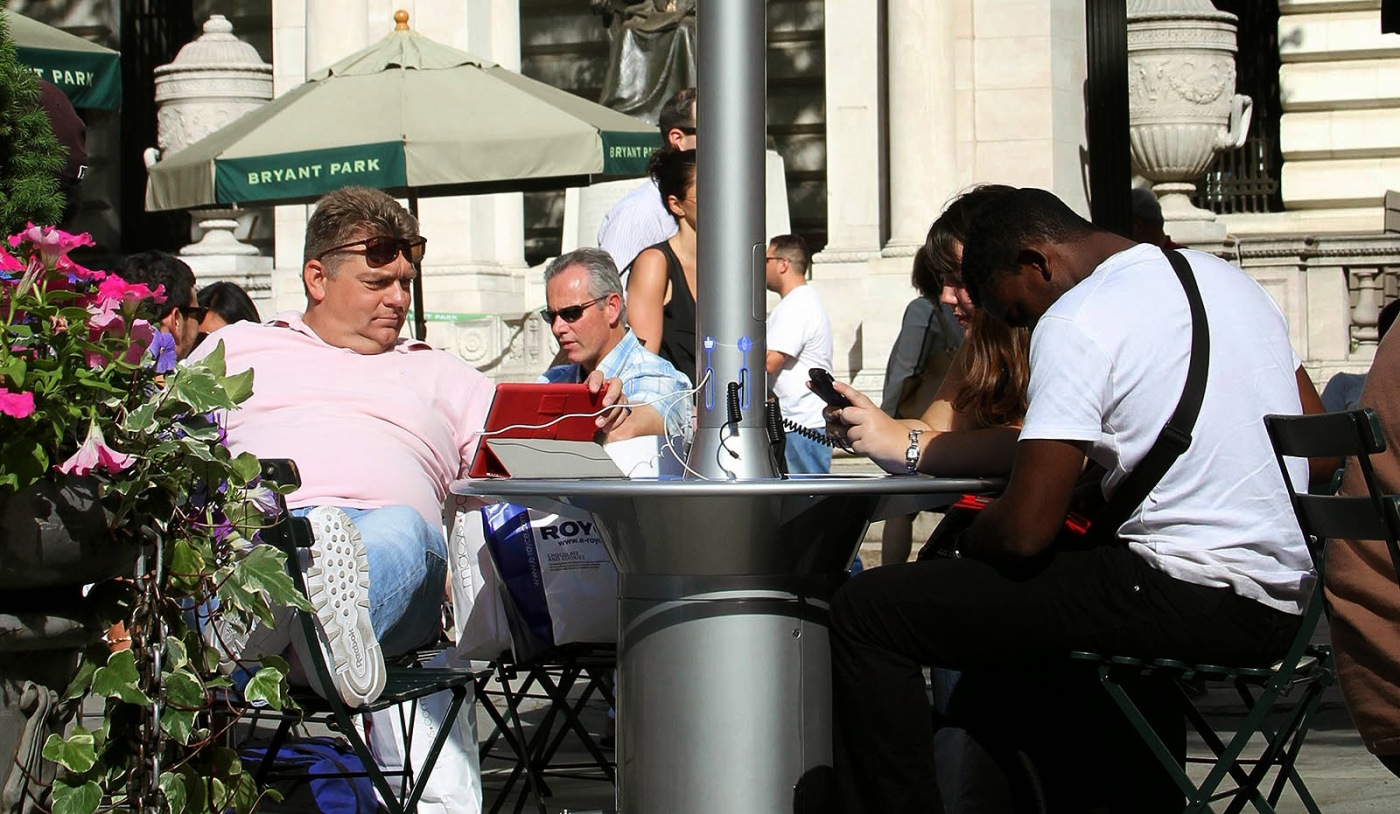 CityCharge features a rotatable solar panel that can be moved in response to the sun. It is also a very robust and vandal-proof piece of engineering. Most parts are carbon steel with an electro-coated and polyester powder-coated finish, ensuring maximum protection against rust and UV degradation. It is also easily cleaned with residential-grade cleaning products. 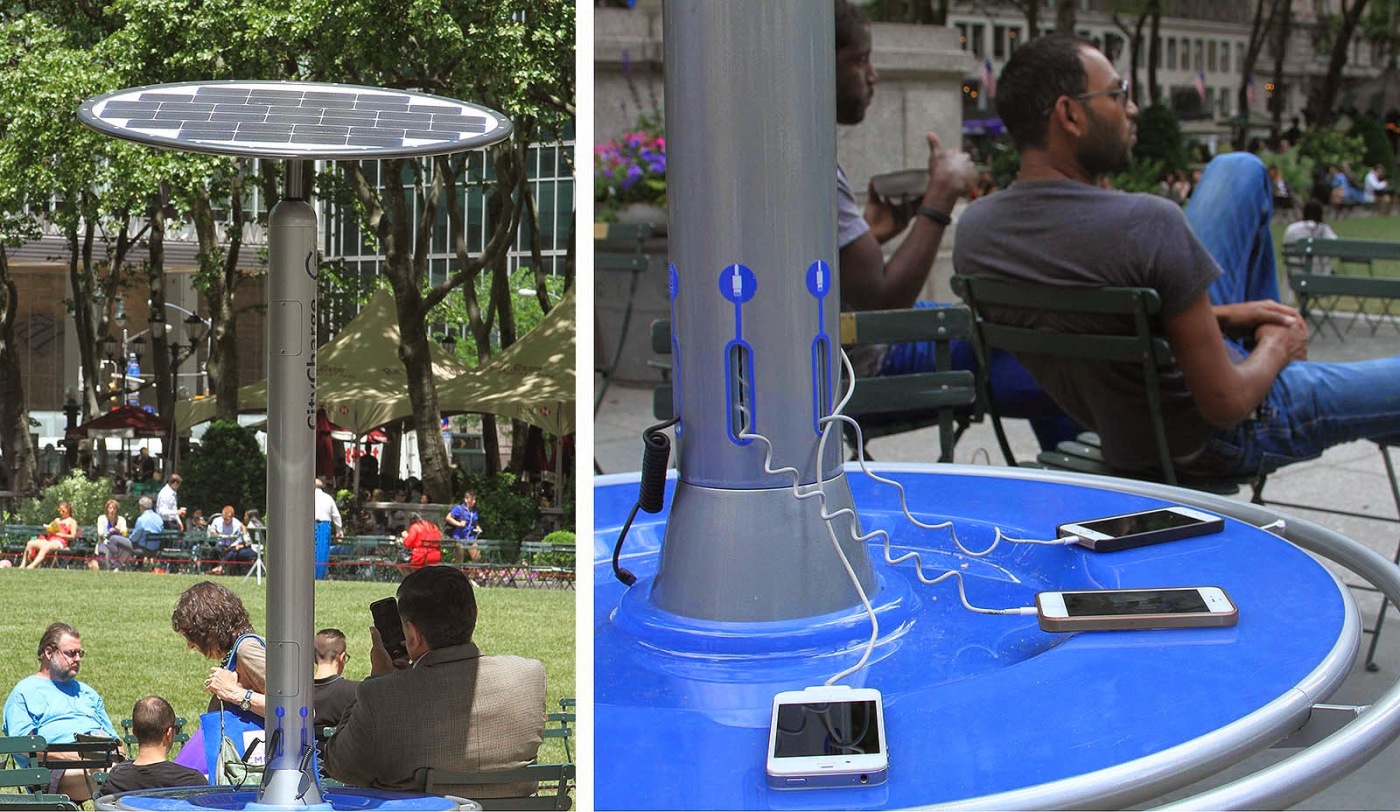 Green Barrel and Landscapeforms are currently developing improvements for CityCharge, based on careful observation of the prototypes in Bryant Park. Product performance and user comments are all being taken into account, with the aim of launching a commercial product in the near future. 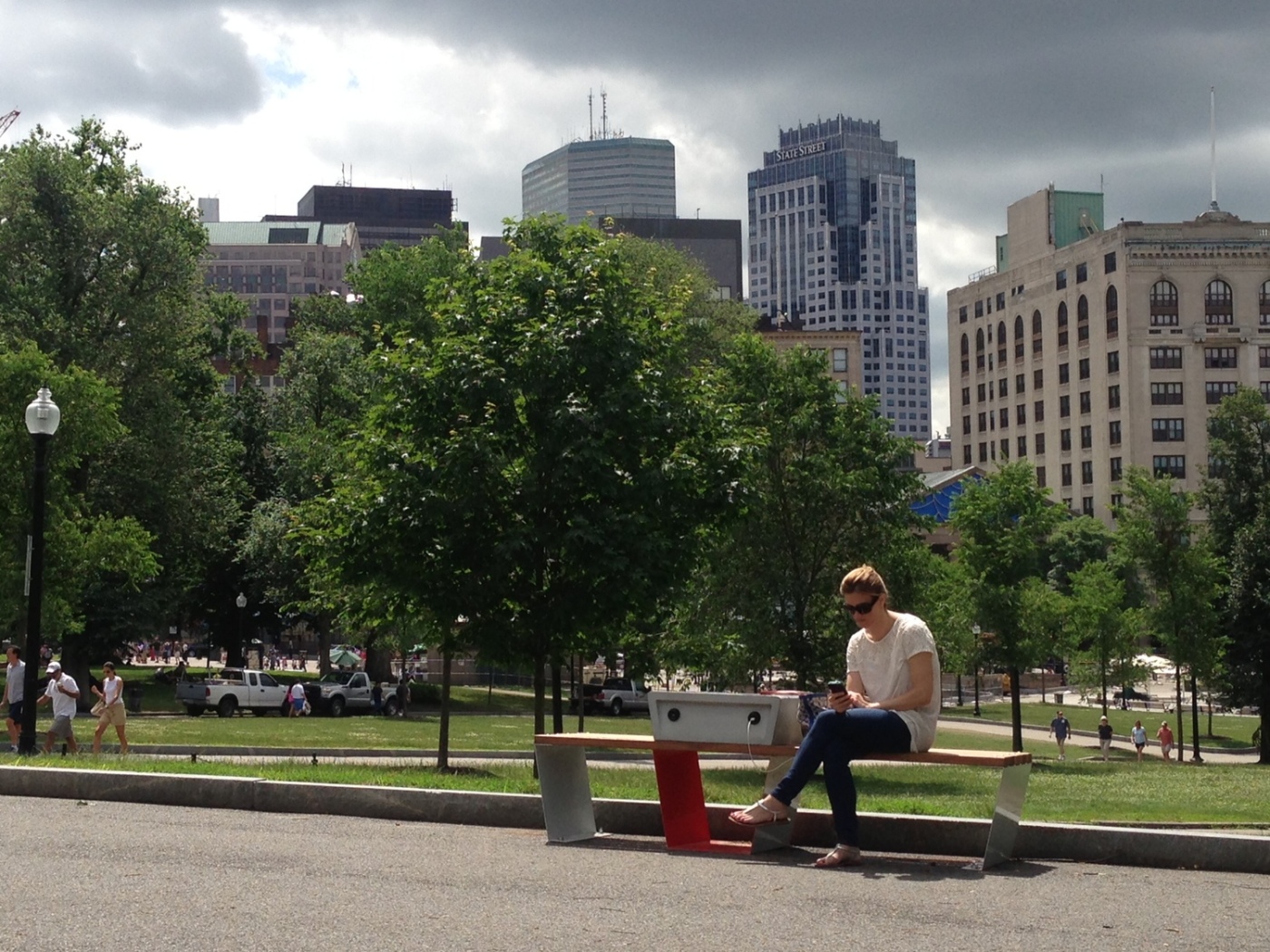 The latest addition to this emerging family of solar-powered street furniture is the Soofa. Created by Changing Environments (an MIT Media Lab spin-off company) the Soofa is a solar-powered bench that sports a pair of integrated charging points for smartphones and tablets. The ingenuity of the Soofa doesn’t stop there though; the bench also features ‘smart’ technology, with sensors that collect and share location-based information like air quality and noise level data. 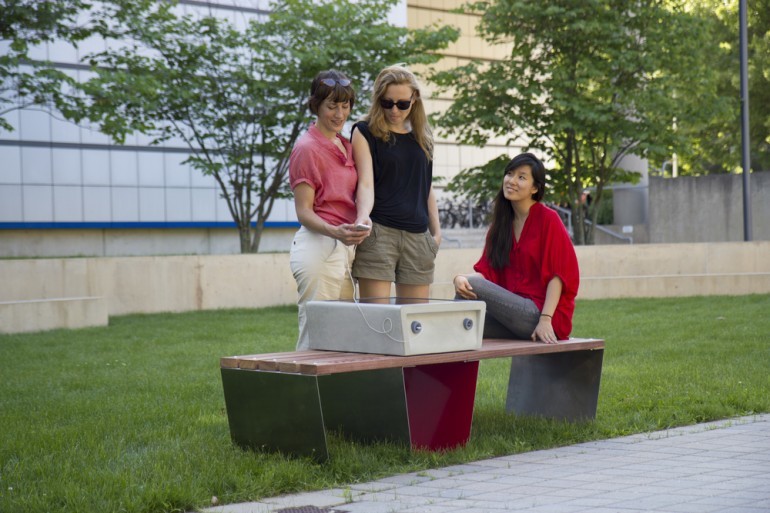 The first Soofa was installed in Titus Sparrow Park in Boston last month. The idea is that the data collected from the benches will be made available on the Soofa website, including the number of hours of solar charging, number of people who have used the service, the local air quality, and the local noise pollution level. 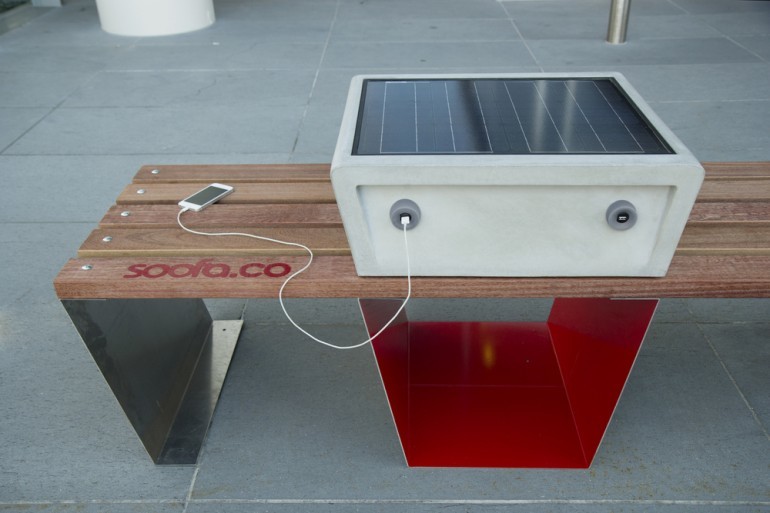 “Your cell phone doesn’t just make phone calls, why should our benches just be seats?” said Boston Mayor Marty Walsh. “We are fortunate to have talented entrepreneurs and makers in Boston thinking creatively about sustainability and the next generation of amenities for our residents.”

Residents of Boston were encouraged to suggest locations for additional Soofa benches, by placing a pin on an online map, or by tweeting or emailing their preferred spot. They were also given the opportunity to name the benches by visiting the Soofa website. Initiatives such as this help to engage citizens with their environments, encouraging innovative design solutions and more socially sustainable cities. 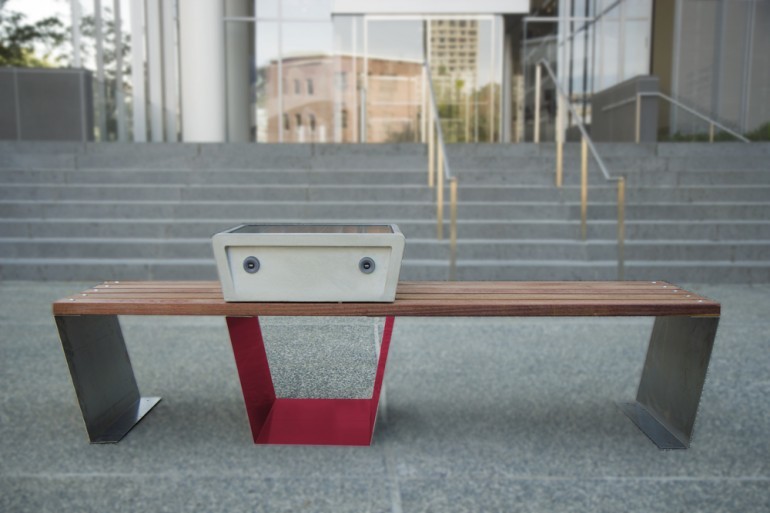