Re-think Athens Design Competition: Vision in a Time of Recession, by OKRA, in Athens, Greece. Greece is a country undergoing a social and financial ordeal. One might think that this would not allow for anything important to emerge in any field, let alone urban design and landscape architecture. Well, it appears that creativity and vision seem to be affordable even in a country in crisis. The signs of recession have become quite obvious in Athens, the capital of Greece. The city center has changed dramatically over the past few years due to a lack of commercial activity, strikes, and security and maintenance issues. There was — and still is — an imperative need for things to change.

Birdseye plan of the area. Image courtesy of OKRA

The “Re-think Athens” Design Competition, held in 2012 by the Onassis Foundation (www.onassis.gr) in collaboration with the Greek State, has attempted to tackle the present situation and change it. First prize has been awarded to OKRA, in collaboration with Mixst Urbanisme, Wageningen University, Landscape Architecture Group, Studio 75 And Wsgreentechnologies Gmbh. 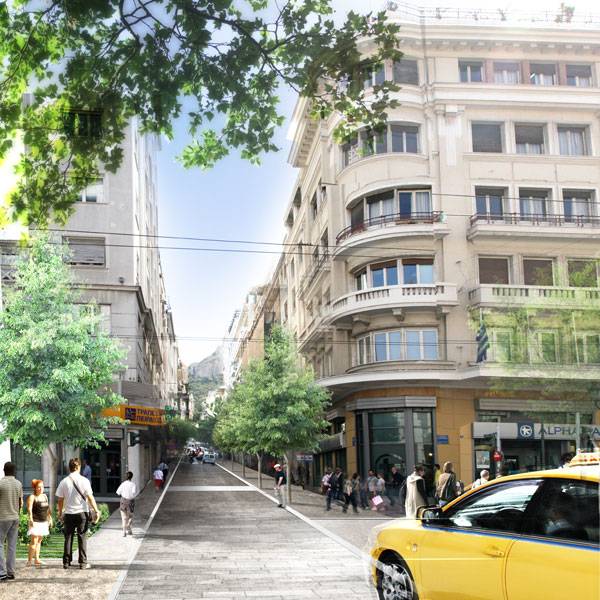 560,000 Square Meters of Intervention Panepistimiou Street is the main design field of the competition. The intervention area is 560,000 square meters and the total length of the intervention zone is 2.5 kilometers. Panepistimiou Street is one of the most well known commercial and central streets of Athens. It unites two important city squares — Syntagma and Omonoia. The design focuses on changing the street’s character and function in order to change the dynamics of the city center. Related Articles Featuring OKRA: 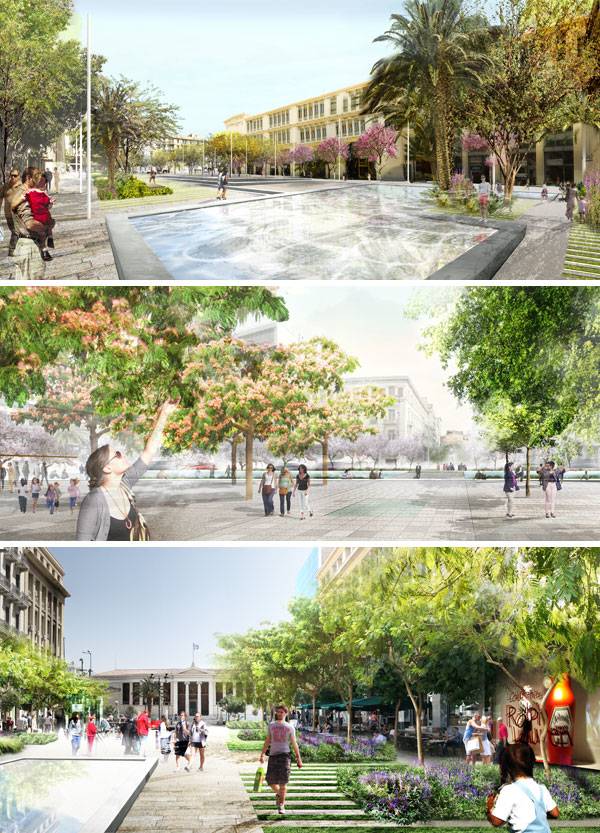 Making the Area More Accessible and Walking Friendly Nowadays, Panepistimiou is a one-way, six-lane road. There is commercial and cultural activity toward Syntagma Square, which gradually fades when heading to Omonoia. The design intention is to transform the city center from a bypass into a destination. The axis will be converted into an interesting route on its total length. The concept is to combine pedestrian movement along with car and public transport. There has been given great emphasis to the tram network expansion. The intention is provide the area with a contemporary, urban character, making it more accessible and walking friendly. 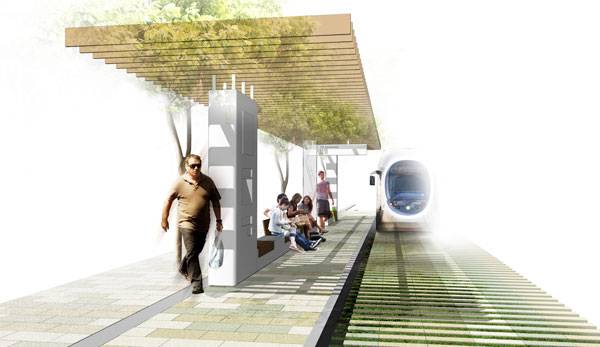 The focal points of the intervention are: • Panepistimiou Axis • Korai Square • Dikaiosinis Square • Omonoia Square Design Principles The axis will be transformed into a boulevard. There will be a combination of public transport, pedestrian movement, and car circulation in order to reactivate the city center and create conditions for a more sustainable city. There will be planting beds with indigenous species and rows of trees that will improve the atmosphere and the microclimate along the street. Circulation One of the project’s more controversial issues is how it will deal with vehicle circulation. The intention is to transform the circulation regime in the city center. This would cause extra vehicular load for the roads and avenues around it. The vehicular traffic study, conducted with the most advanced calculation techniques, has indicated that the proposal could actually work. Sustainability One of the project’s innovations is in rainwater treatment. Large water tanks will be constructed to store rainwater, which will be used for street cleaning and irrigation purposes. Thus, the project will become sustainable to a large degree and will teach us a more ecological and environmental friendly approach toward urban design. 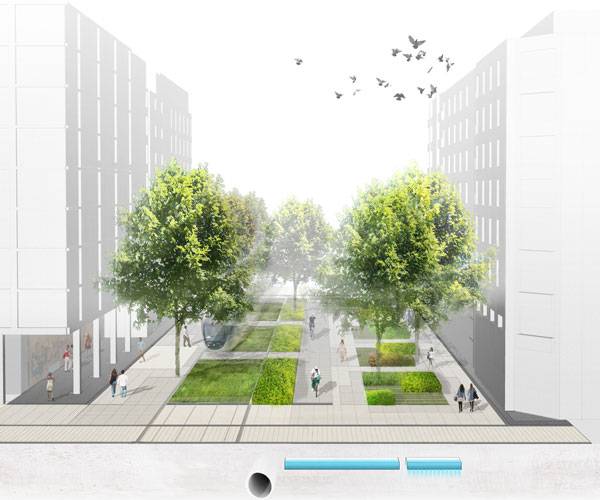 Vegetation Eight hundred new trees will be planted, and existing plant beds will get enhanced vegetation. The selected species consist of trees and shrubs already found in the roads and parks of Athens. There are Jacarandas, Plane trees, Mulberries, and Acacia trees, among other species. This is an excellent approach, since it makes sure that all plants are tolerant to Athens’ climate. However, one could question the coherency between species, since not all of them could be found in one ecosystem. On the other hand, one could argue against that, noting that urban ecosystems have little to do with natural ones and that heterogeneity is an advantage rather than a discrepancy in this particular project. 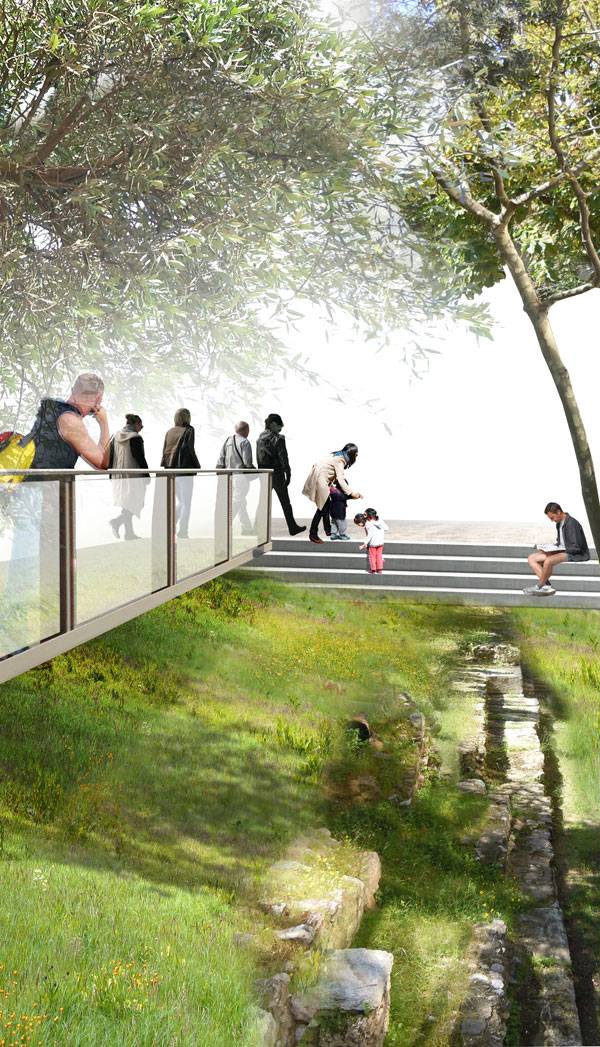 From Vision to Realization The Re-think Athens Competition has given birth to ideas, arguments, and controversy in Greece and internationally. But what happens with its realization? The project’s realization seems to be an issue of national priorities and processes. Let’s hope that the right impetus will be given to help this vision become reality. Can design alone transform a city’s character and its citizens’ everyday life, despite the social circumstances? The answer is obviously “no”. However, design can create a certain framework for things to start changing. Instead of pursuing high-quality, designed urban spaces to prove the financial growth of a country, the intention is to achieve growth and sustainability through a spatial context. It may sound like a paradox, but it could work, and thus offer a new perspective regarding urban design potential. 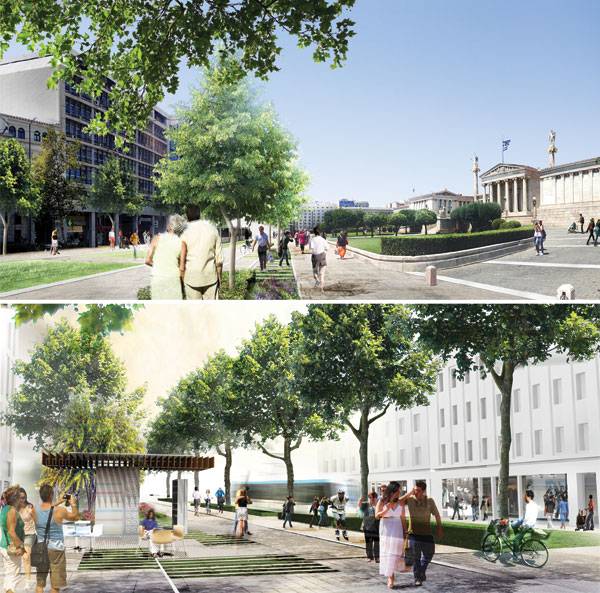