The Zombie Bench by NEON No, the zombie apocalypse is not upon us (well, not yet). This sculptural concrete bench challenges the stereotypical idea we have of public benches as boring and strictly functional pieces of furniture. Originally built at the Pontoon Dock in East London, it is an unusual — and beautiful — outdoor seat that is sure to make an impact on the public with its dark concept. 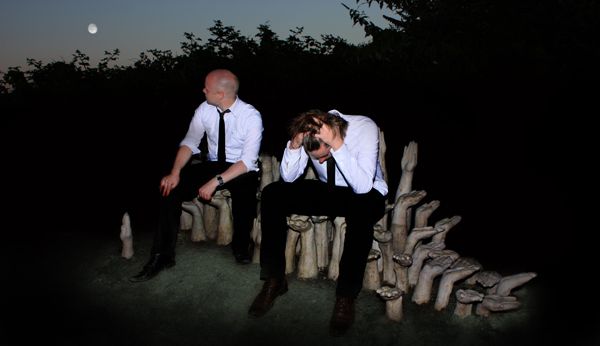 Zombie Bench – A place to think in your darkest moments; credit: NEON

In 2012, RIBA London launched a design competition as part of London Festival of Architecture entitled “Pews & Perches”. The competition aimed to create one-off seats to be installed at London Pleasure Gardens, which was meant to be an outdoor festival venue for the London 2012 Olympic Games. Thirty-two designs were selected by the judging panel, which included RIBA London, London Pleasure Gardens, Wallpaper* Magazine and Studio Weave.

Zombie Bench was one of the winning entries, designed by creative London-based firm NEON and constructed by specialist manufacturers Gray Concrete. Seventy prefabricated concrete arms emerge from the ground to make up the bench composition, which is very well put together. The way the elements were arranged creates interest and movement, dragging the viewer’s eyes (metaphorically!) up and down in a pleasant journey through incredibly expressive hands. 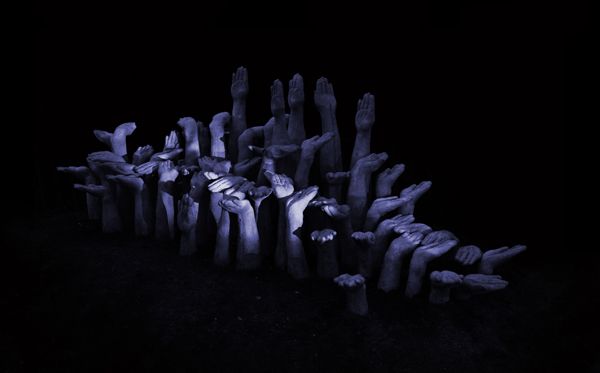 The Zombie Bench lit up at night, creating a much more eerie presence; credit: NEON

The details are very impressive, as the concrete models were molded using real human arms. Fingernails, wrinkles, and veins contribute to a very realistic look — which makes one question if they are really nothing more than just cast concrete elements. The spooky furniture was featured on The Culture Show (BBC Two); please see video below: For those interested on how the concrete limbs were built, here is the construction process step-by-step: Step 1) reinforcement placed within latex glove; Step 2) glove positioned as required and filled with concrete; Step 3) after 3 days, concrete hand is removed; Step 4) plastic sleeve formed to mould arm to desired length; Step 5) after 3 days, full concrete arm is removed; Step 6) concrete arms rammed in trench dug on site. Pressure treated timber bracing cut to length and drilled. Trench filled with earth to create mound.

How to Get The Zombie Bench

Sadly, London Pleasure Gardens went into voluntary administration in August, only five weeks after it opened to the public, leaving the Zombie Bench abandoned. NEON and Gray Concrete offered it for donation in October (just before Halloween), but it remains without a home. They are still searching for a good place and are willing to talk to anyone interested — under the condition that the bench is installed in an open area and available for public use, “so that it can scare people under a full moon for many Halloweens to come!”, NEON says. 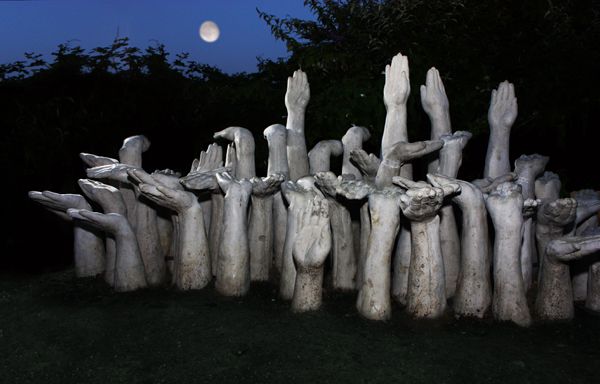 Would you sit on it alone? credit: NEON

Although a bit intimidating at first, Zombie Bench does look quite inviting after you get familiar with the idea of having your bottom touched by dozens of (un)dead hands. We like how those hands do not seem to be anxiously trying to reach out for human brains, as zombies are generally portrayed. Rather, the hands gracefully bend to generously offer a place for one to sit on and rest — so gentle! We hope Zombie Bench finds a good home. After all, horror films can have happy endings, as well. Article written by Julia Lucchese Published in Blog