Westergasfabriek Park, Gustafson Porter, Amsterdam Netherlands. In 1997 landscape architect Kathryn Gustafson, together with Francine Houben of Mecanoo Architects, won the competition for the master plan of Westergasfabriek, a former gas facility in Amsterdam. The council in consultation with the local community had a dream of transforming the heavily polluted site into a new recreational facility, subject to a major clean-up. Through a process of regular consultations with the stakeholders, the architects and landscape architects were able to help make that dream a reality. In the mid-2000s, the buildings were restored and a park with innovative features came into existence. 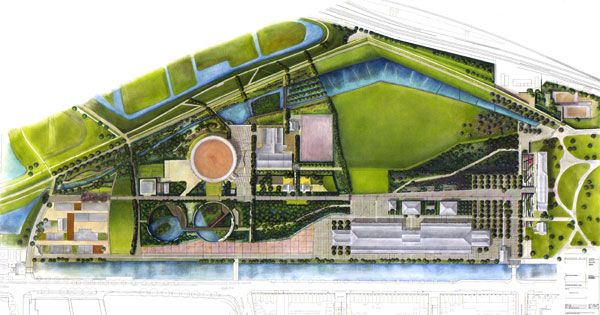 A Brief History The Park occupies a strip of land between the Haarlem Canal and the main railway from Amsterdam to Rotterdam. In the mid-1800s, the site supplied Amsterdam with gas for street lamps and domestic use. It also contains old buildings constructed in a style known as Dutch renaissance. After the discovery of natural gas in the 1960s, the gas works was shut down. However, the soil remained contaminated with toxins like tar, cyanide and asbestos. 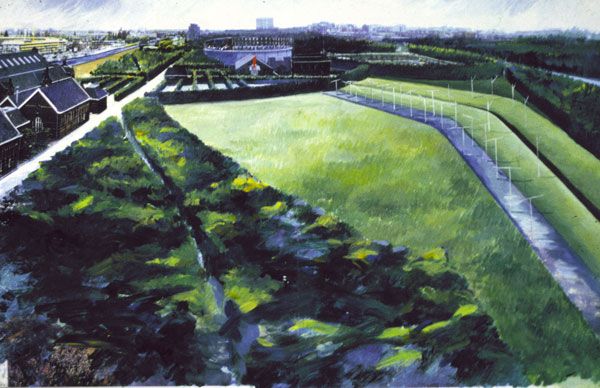 For many years, the site was used for storage. In 1981, the site was rezoned as a recreational space and in 1989 it was zoned a site of historical interest. 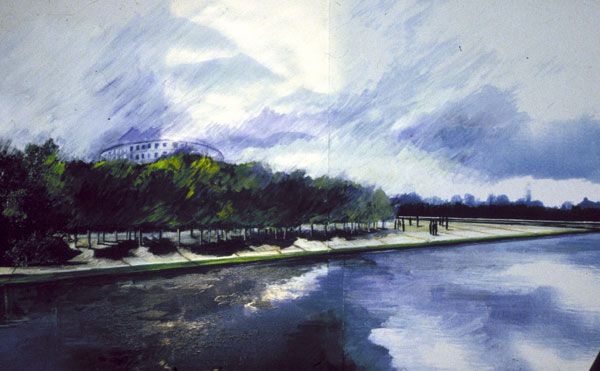 A Vision for the Future That Celebrates the Past Kathryn Gustafson’s vision was based on the themes of man’s relationship with nature and a connection of the elements derived from the evolution of the park. Her scheme known as “Changement” offers a diversity of spatial and temporal experiences and proposes a delicate balance between society and landscape, city and nature and order and freedom. 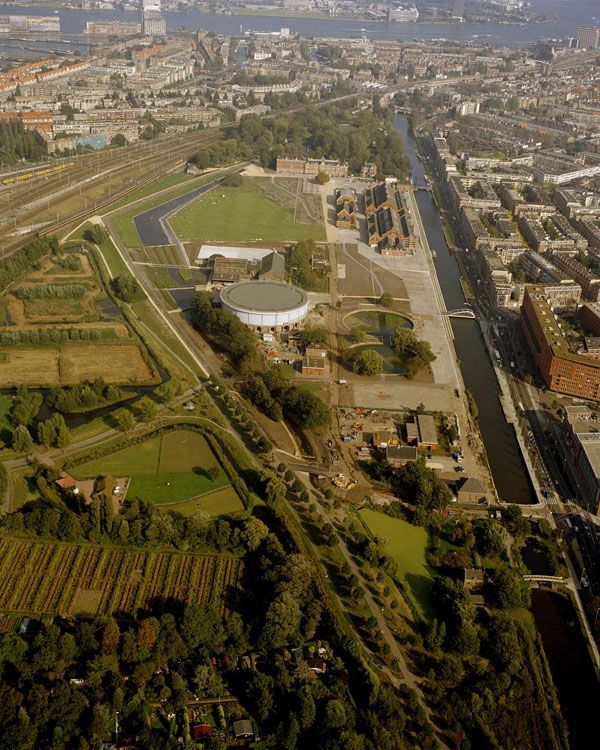 The Design Embodies a Changing Relationship With Nature The plan creates a strong structure by combining a central axis, orchards and meadows with winding paths and native plantings. Within this structure, variety is created through detailing. As one travels along the park from east to west, humankind’s changing relationship with nature is explored through different designs. The rigid formality of the traditional city park gradually gives way to freer and more open styles. The places in between reflect post-war attitudes of the landscape as a place for sports and recreation. In the north-west the focus is on pure ecology and the plants are native. 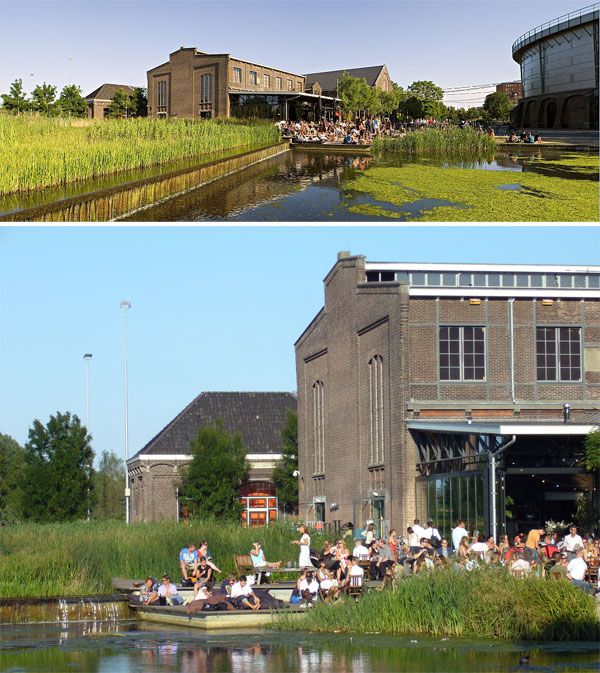 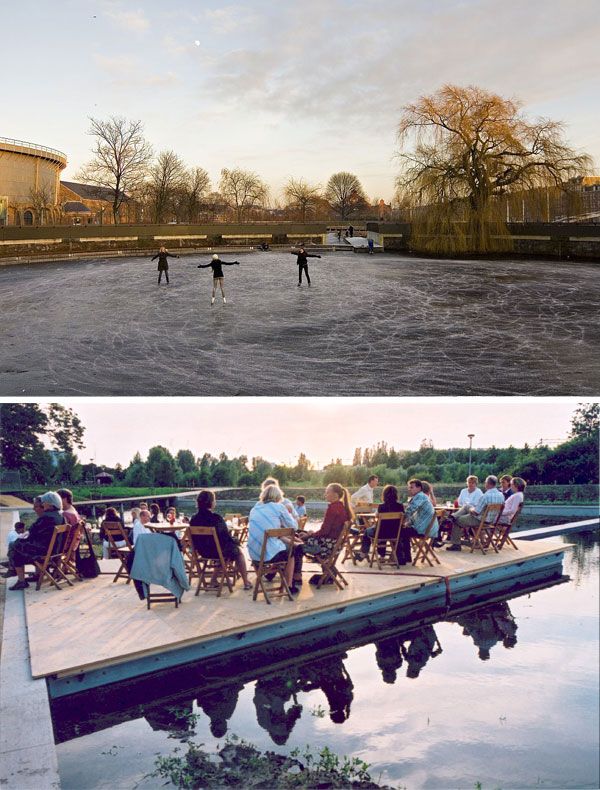 Landscape Works Tansform the Site Concerns over pollution led to an innovative method of soil restoration being developed by Arup Engineers. Clean soil from elsewhere helped create a buffer from the polluted soil and the result was a new undulating terrain. The removal of polluted sludge from the central gas tank caused noxious smells which were controlled by the installation of a tent and ventilation equipment during the clean-up. 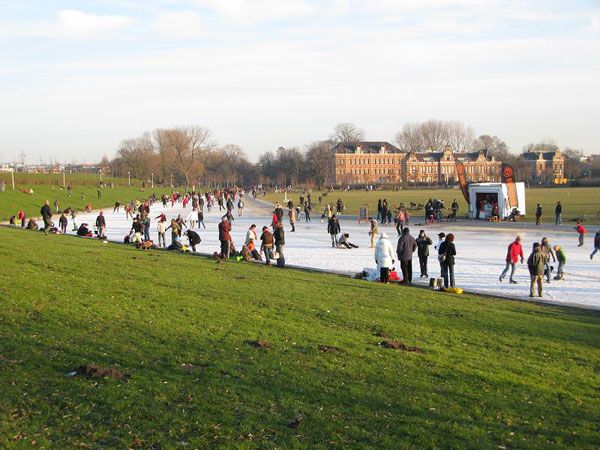 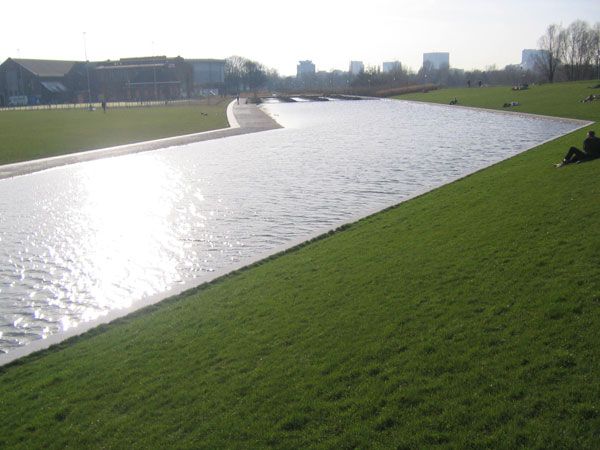 Landform Modelling Gustafson Porter used a technique of modelling landforms in clay to create a spine of woodland that defines the territories of the buildings and canal in the south and the water gardens and event space in the north as well as a mound to protect the site from the railway line. Concrete retaining walls, stone ridges and paved surfaces provide further detail to this structure. Old and new elements exist side by side Remains of 19th-century gasholders and stelcon paving coexist side by side with brand new elements like timber boardwalks. Other new features include trails and gardens, playground, waterfall, bridge and the artificial lake that could be drained and used as a venue for outdoor events if required. An Event Field at the centre is framed by the lake and amphitheatre mound to the north. Reinforced grass facilitates transport of equipment for concerts and fairs. 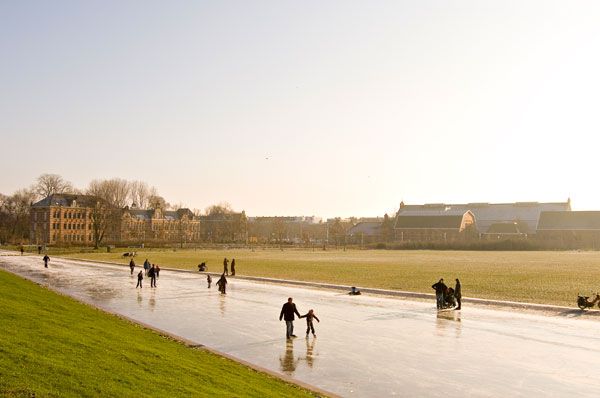 A Restored Building With New Meaning Today, the restored buildings house restaurants, galleries, and other commercial establishments and cater to a variety of events. A central promenade known as ‘The Axis’ runs from the town hall end in the east toward the Cite des Arts on the west. Another promenade, the ‘Path of Dreams’ connects various other parts of the site. 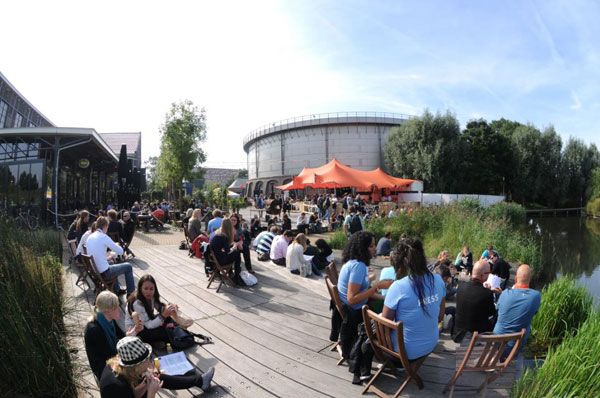 Plants are for healing as well as aesthetics The existing large trees are enhanced by a band of new trees and woodlands running in a diagonal direction from south-west to the northeast on the newly created mound. Salix babylonica (weeping willow) and Salix alba (white willow) are planted around the remnants of the gasholders which have been sealed and filled to create a ponds and aquatic garden with floating timber walkways and terraces. 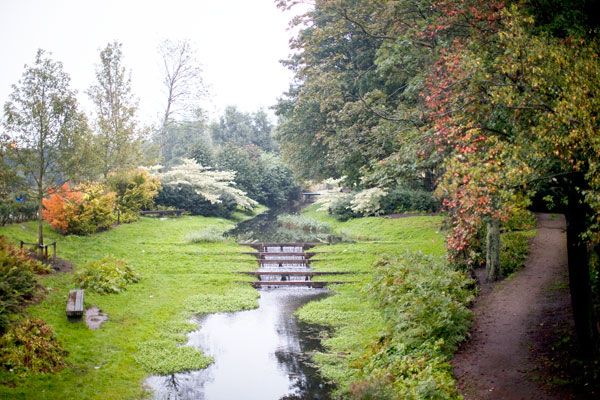 The Power of Phytoremediation Willows and water loving plants like reeds are used in phytoremediation, a biological process to remove and reverse the harmful effects of pollution. Westerfabriek Park with its innovative designs, construction methods and soil remediation is an early model of brownfield reclamation and recycling of built heritage and is a good example of how existing elements may be usefully incorporated into the new design. Westergasfabriek Park is not just a popular recreational site. It is an educational and sensory experience that brings together the past, present and future, as well as humanity and nature. 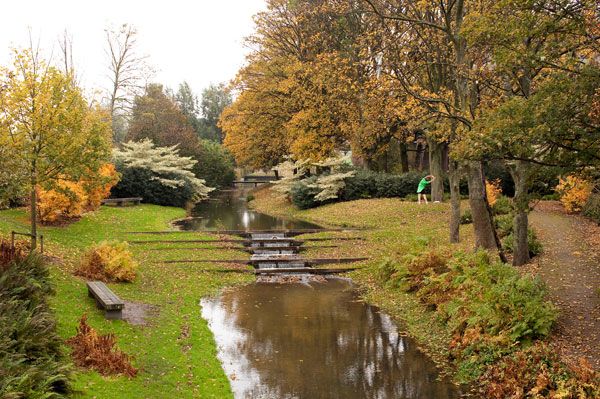