Plants, often serve many precise functions, many of which are in harmony with their environment, but what happens when the function is to infect and harm anyone who comes into contact with it. Is it still harmonious with its enviornment, is it trying to protect for survival or trying to attack to takeover? Beautiful colourful plants and flowers are sometimes just as dangerous as a poisonous snake. Their only defense is to cause harm to its predator, it may be in the form of thorns, like the prickly Mala Mujer, or in the form of toxins that affect the victim when the plant is ingested. This article is all about danger in nature and how it can spell doom for anyone unfortunate enough to ingest or come in contact with these poisonous plants, enjoy: 10. Daphne spp. 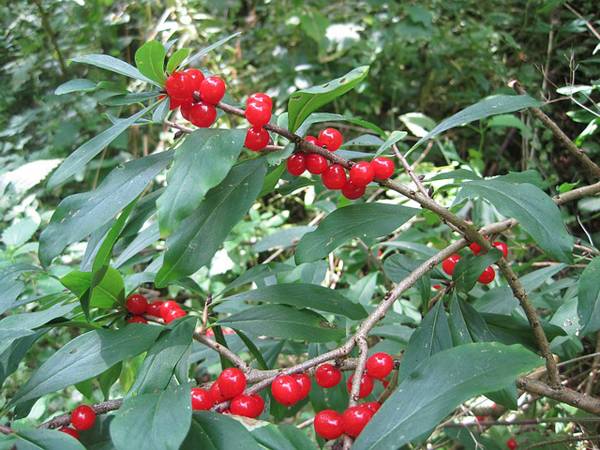 Daphne, also called spurge laurel, lady laurel, paradise plant, or dwarf bay, is a small shrub about 1–1.5 meters high and very popular in North America. All parts of Daphne contain extremely active toxins, but the greatest concentrations occur in the bark, sap and berries. Some researchers suggest that Daphne’s extracts may have potential for treating leukemia; the plant is also known to be co-carcinogenic in the presence of low doses of carcinogenic compounds. The showy colors of the berries often attract children, so if you have Daphne in your garden, care enough to keep them away from it. Even a single berry chewed but not swallowed can cause intense burning in the throat and mouth. Consumption of a few berries can cause upset stomach, headaches, diarrhea, delirium, and convulsions. If the victim falls into a coma, death can ensue. 9. Oleander, Nerium oleander 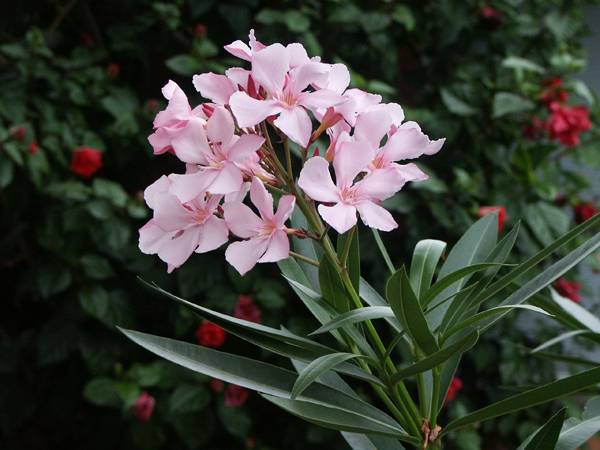 It is one of the deadliest plants on earth. Widely used for decoration, this plant is so venomous that one single leaf is enough to kill an adult human. It contains several toxins in its flowers, twigs, leaves, and berries. When ingested it affects the heart, digestive tract, and the nervous system almost immediately. Though native in parts of the Mediterranean and Asia, it is now widely cultivated throughout the world. It is beautiful shrub but a very poisonous one. 8. Nightshade, Atropa belladonna 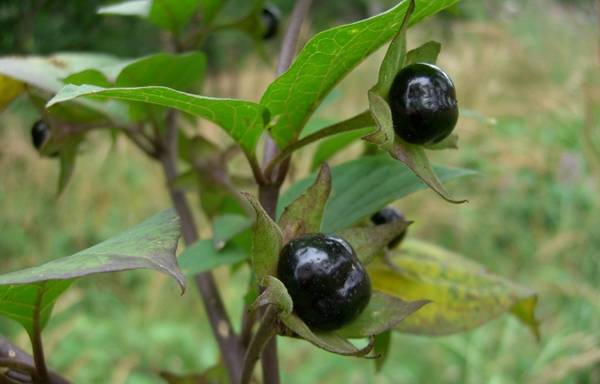 Also known as the devil’s cherry, black cherry, great morel and belladonna, the nightshade is totally toxic. Once ingested it results in a sudden loss of voice, followed by a respiratory trouble and convulsions. Oddly, horses, birds, sheep, goats and pigs seem to be immune to the effects of nightshade. The Greek historian Plutarch spoke of armies being wiped out by nightshades, and legend has it that Macbeth’s soldiers poisoned the invading Danes with wine made from this sweet fruit. 7. Water Hemlock, Cicuta maculata 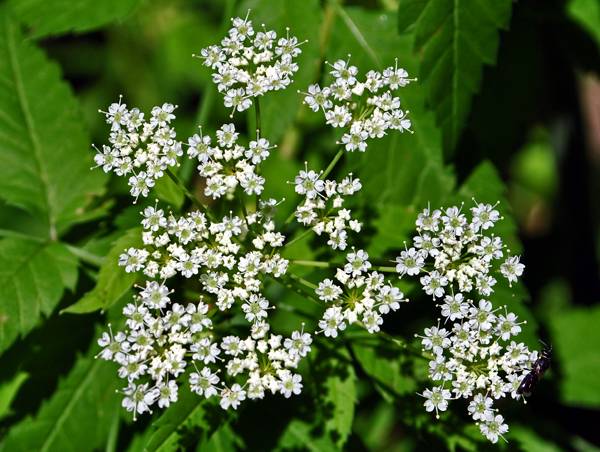 A member of the carrot family, the water hemlock is considered to be the most toxic plant in North America by the USDA. The small white flowers and their stems aren’t harmful; the stalks of the water hemlock, however, are full of a sap that contains cicutoxin. Ingesting just a small amount of the cicutoxin can affect the nervous system and cause a grand mal seizure. Oral contact with this dangerous plant is typically fatal. 6. Datura spp.

The angels’ trumpet flower is often found in home gardens and is known for its distinct fragrance. Experts say all parts of the plant are poisonous. Angel’s trumpet has hallucinogenic effects; there have been many horror stories of after effects of consuming this plant. Effects of ingestion can include paralysis of smooth muscles, confusion, tachycardia, dry mouth, diarrhea, migraine headaches, visual and auditory hallucinations, mydriasis, rapid onset cycloplegia, and death. 5. Castor bean plant, Ricinus communis 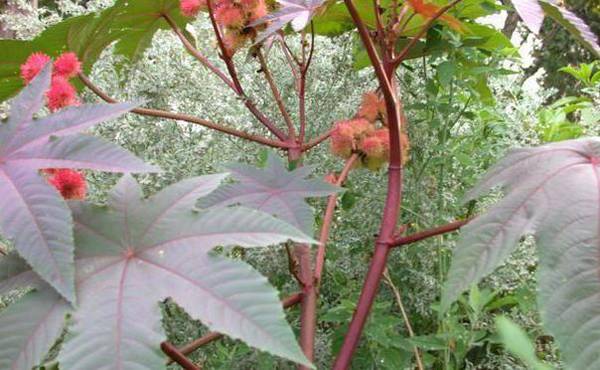 An ingredient in the castor bean just happens to be the deadliest plant poison on earth. The plant is the current holder of the Guinness Book of World Records title for world’s most poisonous plant. Literally, just one tiny castor bean is enough to kill an adult within a few minutes. Castor oil is made safe with the removable of the lethal compound known as ricin. Ingestion of the seeds can lead to burning sensations in the mouth and throat, intense abdominal pain, and bloody diarrhea within 36 hours, and can lead to death within 3-5 days if left untreated. Amazingly, castor bean plants are grown for decorative purpose all over the world, particularly in California. 4. Moonseed plant, Menispermum canadense 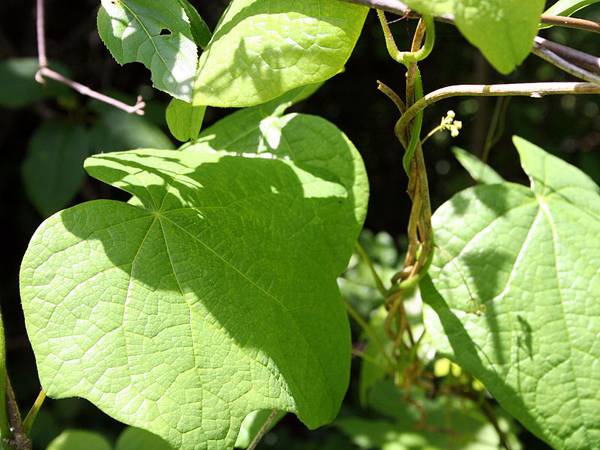 Moonseed is a woody vine with cluster of several small fruits, or drupes, which resemble grapes. This stone fruit plant is generally found in eastern North America, and it is extremely toxic for humans, if ingested, though birds can eat it. They have been mistaken by people foraging for wild grapes, but fruits of Canada Moonseed can be fatal, so care needs to be taken. The key to recognizing moonseed drupes is that they have only one large crescent-shaped seed, while grapes have many seeds. 3. Winter sweet, Acokanthera spectabilis. Bushman’s poison, Wintersweet 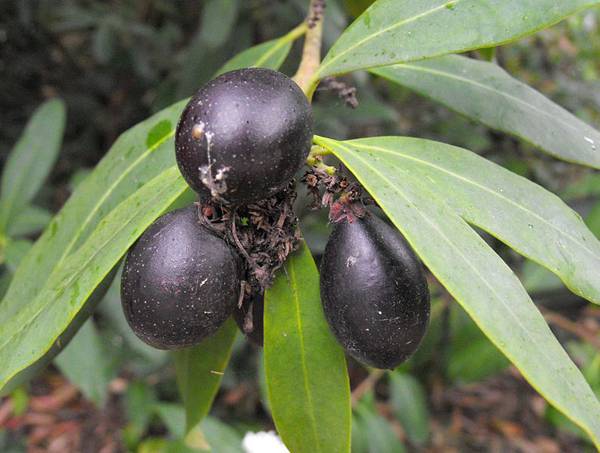 “Creative Commons Ripe fruit of a Dune Poison-bush at the Quail Botanical Gardens in Encinitas, California, USA. By Stickpen, licensed under CC

The winter sweet also known as the Bushman’s poison has famously been used by the Khoisan of South Africa to poison the tips of their arrows. Though the plant produces pleasantly scented flowers and a tasty plum-like berry, the milky sap can be fatal. The leaves, however, have medicinal properties, but all in all this is a garden plant that should be avoided. 2. Dumb cane, Dieffenbachia sp. 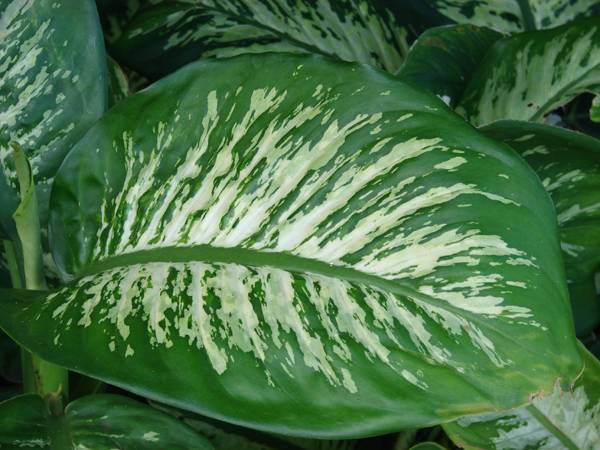 The distinctive leaf pattern of the very popular Dieffenbachia species is seen in many homes. Painful and immediate swelling of the mouth and throat occurs after chewing on dumb cane. Speech impediment can occur, sometimes lasting for several days.

Again, all the parts of this plant are poisonous. One should avoid eye contact with the juices which can result in intense pain and swelling. It is a very popular indoor pot plant as it is useful for purifying indoor air. 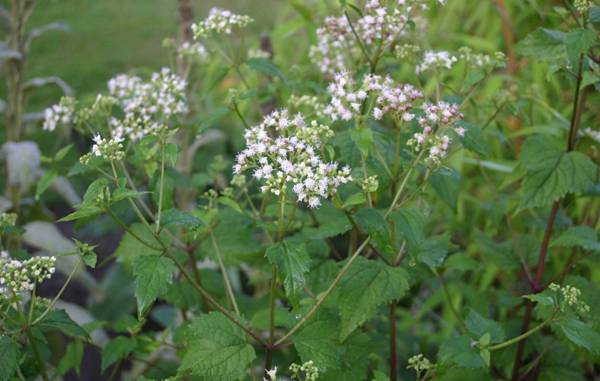 Commonly found growing wild, white snakeroot’s leaves, stems, and small white flowers are loaded with an unsaturated alcohol called tremetol. Snakeroot poses the greatest risk to cows and sheep. It is so potent that just drinking the milk or eating the meat of a cow that ingested the plant can lead to severe sickness and even death. Growth of this dangerous plant is usually controlled today to prevent livestock poisoning, but in the 1800s, milk sickness from contaminated animals was common as it was responsible for thousands of deaths at the time; including that of Abraham Lincoln’s mother, Nancy Hanks Lincoln. When we read such facts, the best realization can be one should not touch or eat anything without knowing the results of doing so. Often these facts are ignored or people are simply not aware. Looks can be deceiving; these plants prove that nothing should be judged by the way it looks, as beauty acts as an illusion. For that reason it becomes very important to be careful when experimenting with new or unseen nature. Make a note of these top 10 most dangerous plants on earth listed above if you’re visiting a garden or if you’re planting your own. Recommended reading: Handbook of Poisonous and Injurious Plants  by Lewis S. Nelson Mind-Altering and Poisonous Plants of the World  by Michael Wink