Vache Noire (Black Cow), by Agence TER Landscape Architects, in Arcueil, France. Agence Ter has made a huge change in the city of Arcueil, France, by creating a contemporary public park out of a non-place once used only by cars. Indeed, the locality of the Vache Noire (Black Cow) was originally an urban wasteland alongside a crossroads deemed dangerous for pedestrians. But thanks to the recent construction of a new neighborhood composed of a shopping center, housing, and offices, the hub of the Vache Noire is expected to become a gateway to the city and an important place for all new users of the site. 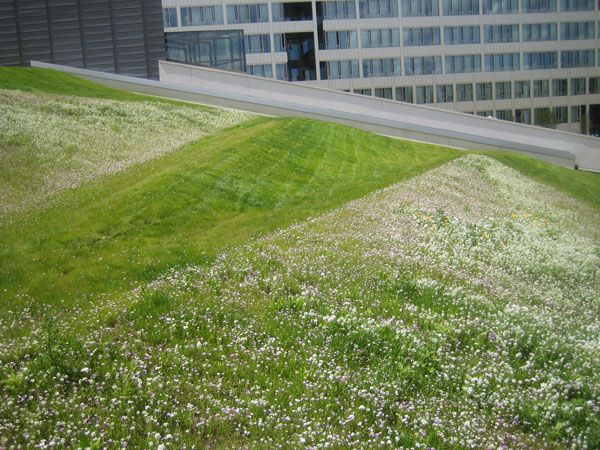 The overall project covers three hectares; 50,000 square meters of the site includes eight housing units, offices, an urban park, and a shopping center. The latter is built on two levels above the ground, with a third level partly buried, a fourth entirely buried, and three levels of underground parking for 1,750 vehicles. With the burial of a large part of the building, the Agence Ter was able to offer a more ambitious project than originally requested. 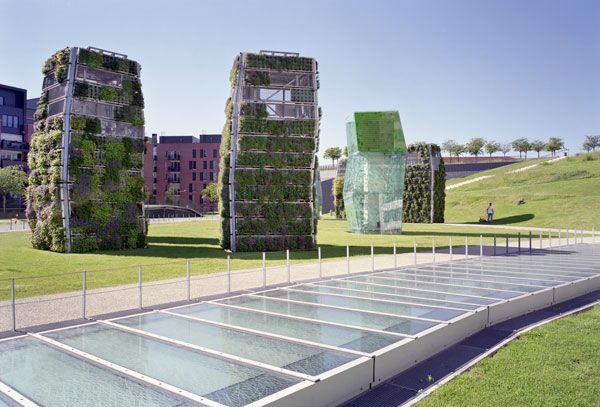 Breaking Boundaries to Create Better Spaces The initial project was designed to create at least 2,000 square meters of green space for the city, which was sorely lacking such space. But the designers have gone much further. They decided to use all of the available space — including the entirety of the roof of the mall area. They created a garden covering 13,000 square meters — 6.5 times more than what the client requested. However, designing a public garden on the roof of the shopping center required the team to show ingenuity, taking into account the many constraints facing them. 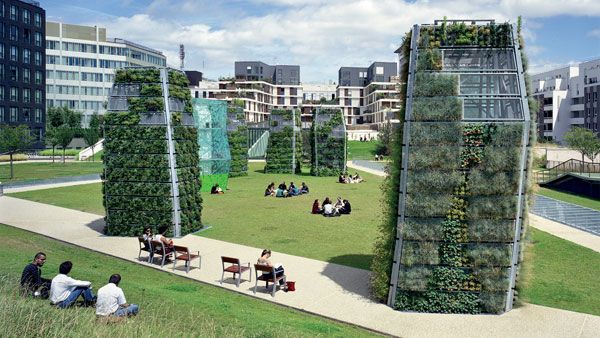 The Main Components of the Project The project is comprised of three main parts: the podium, a large multipurpose grassy area; the stern, a grassy slope used as a glaze for housing; and the bow, consisting of a south-facing balcony treated on an inclined, flowery meadow. The balcony, rising to 17 meters above the ground, serves as a lookout and entrance porch to the mall. To use the roof and integrate the framework and technical elements, landscapers have folded the roof surface into an eventful topography. The tectonic roof shape obtained by these deformations creates different access points to the mall, the street, and also the offices and homes. Other Articles Featuring Agence TER Landscape Architects: 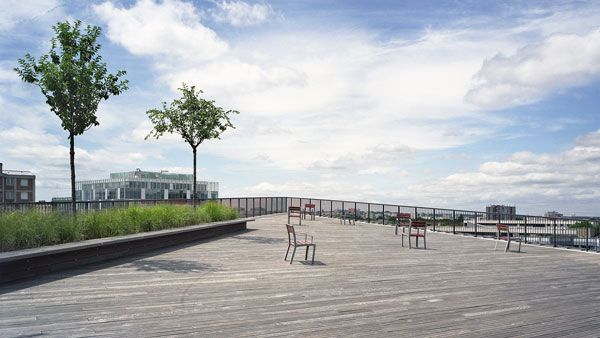 Creating Functional Works of Art Agence Ter turned the technical constraints, such as windows and ventilation, into works of art that enliven the garden with their grace and flexibility. The flat glass roofing serves as routing and skylights, allowing passersby to admire the interior architecture of the building from the roof. Thus, the sun illuminates the mall during the day. At night, artificial light from the mall’s interior illuminates the garden and creates a luminescent path, eliminating the need for external lighting. The Creation of Turbulent Sculptures The team incorporated the 7.5-meter-tall metal reinforcements of the breakdowns in the garden without altering the site’s harmony. They transformed these rigid structures into turbulent sculptures. Some are vegetated while others are covered with a printed green glass screen. All are illuminated from the inside, creating an enchanting atmosphere. Reworking the Once Dangerous Crossroads The once dangerous crossroads have also been reworked. The center is ringed with a Corten steel strip and the ground is covered with red (Lauze) pavers from Brazil. In the center, 42 Metasequoia glyptostroboides of about 15 meters were planted. Today, a walkway spans the traffic lanes, providing safe crossing for pedestrians. In creating a new pedestrian flow, the crossroads has gained a new landscape with flamboyant colors, since metasequoia needles turn copper in fall, complementing the red of the Corten steel and pavers. Dead Places Can Become Living Spaces If these interventions look independent from each other, this is only in appearance since the crossroads and the roof of the mall are spaces where the pedestrian is usually not invited. But this project shows us that these places can become living spaces. 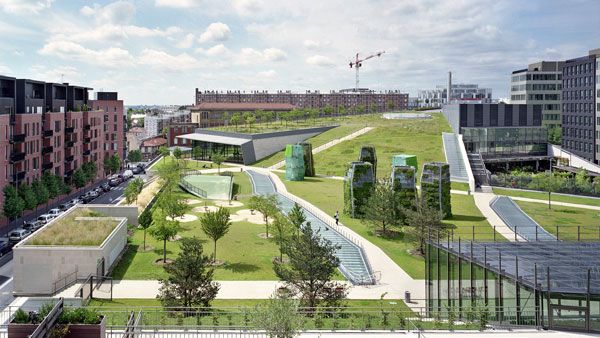 Once again, Agence Ter has accustomed us to grandiose projects, continuing to forge ahead with designs like this one, which has revitalized the city and offered a mix of activities and new sensations in the urban park on the roof. In addition, this project included many technical and esthetic constraints, none of which stopped the designers from turning those constraints into living sculptures. Full Project Credit:  Project: A new commercial and residential area, including redevelopment of the ‘Vache Noire’ crossroad and shopping center roof garden Designers: Agence Ter (Henry Bava, Michel and Olivier Philippe Hoesller) Landscape planners, BET COTEBA (crossroads), BET Berim (garden), work execution by gardens Group 6 architects Areas: 3ha (crossroads) + 13,000m² (garden) Realization: 2006-2008 (intersection); 2006-2007 (garden) Budget: € 4,500,000 VAT (intersection); € 2,300,000 VAT (garden) Client: SADEV 94 Design & Construction: 2004 – 2007 All pictures: ©agenceter- Yves Marchand & Romain Meffre photographers Show on Google Maps