We take a look at 10 ex-industrial sites that experienced the powerful transformation of landscape architecture.  Ex-industrial public parks are a shining example of how great design can reuse, repurpose, and reintegrate spaces for the public. Innovations in urban ecology, water treatment, and green urban infrastructure have all been made, thanks to the unique challenges provided by these landscapes. They have challenged us aesthetically, as well, to find value and beauty in the industrial heritage of a site, asking us to widen the scope of what we consider to be beautiful and worthwhile.

Here are 10 ex-industrial sites that resulted in innovative and stunning landscapes:

Home to the 2012 Olympic and Para-Olympic Games, the 560-acre Queen Elizabeth Olympic Park is one of the largest on this list. Once an industrial area and dumping ground in London’s east end, the park was quickly and expensively transformed in order to host the games. The cleanup of the site alone cost 200,000,000GBP. Two hundred and fifty acres have been transformed into woodlands and wetlands, providing habitat as well as river flood protection for surrounding areas. Queen Elizabeth Olympic Park is continuing to grow and change, intending to become a new cultural center and neighborhood as well as greenspace and animal habitat. Many of the Olympic buildings are being replaced by housing and some commercial buildings. WATCH: A walk in London’s new Olympic Park

Klyde Warren Park is unique on this list since it isn’t a park that replaced an industrial site, but one that provides a unique solution to a similar problem. The park is on a “deck” covering a working freeway, making the thoroughfare subterranean and creating a continuous physical and visible connection through the city. The design is meant to encourage discovery, while also providing a relationship between Uptown and the Dallas Arts District. WATCH: A Day in the Life of Klyde Warren Park – Flyover

The Quarry Garden is located in the Shanghai Chen Botanical Garden, the largest botanical garden in Shanghai. From the 1950s to the 1980s, the site was a functioning quarry, doing massive damage to the Chen Mountain, leaching and removing soils and vegetation and destroying habitat. The design re-creates an ecologically functioning landscape that doesn’t try to hide the site’s history. The materials palette recalls both the natural and industrial pasts, using rusted steel and concrete as well as stone and vegetation to lead visitors into the quarry basins.

The site that now houses Hunter’s Point Park was for a long time an abandoned post-industrial landscape with a breathtaking view of Manhattan. The park is a part of a large, affordable housing project and will provide recreational greenspace for thousands of new residents. It features a large, oval lawn space, a dog park, concession buildings, and ecological wetlands. Hunter’s Point is one of many projects in the works intended to provide public access to New York City waterfronts by creating accessible greenspace, trails, habitat, and gathering spaces. 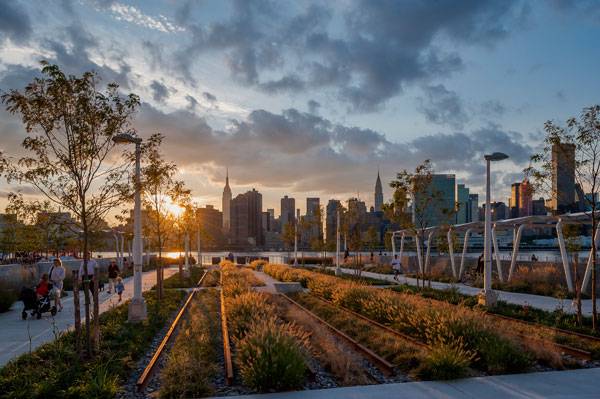 Built in 2007, the Olympic Sculpture Park is an extension of the Seattle Art Museum. The seven-acre site is home to temporary and permanent art installations. The site was owned by the Unocal Corp. from 1910 to 1975, housing a fuel facility, and was in cleanup for another 10 years after operations ceased. Funds to buy the land were raised by the Seattle Art Museum and the Trust for Public Land, eliciting thousands of donations for the Sculpture Park. The design of the park is based off western Washington’s topography and native vegetation. The planting palette starts with a cascade of mountain plants on the highest part of the site, shifting as the topography changes down past the water’s edge into Puget Sound, where habitat reconstruction provides the only salmon habitat on the Seattle waterfront. 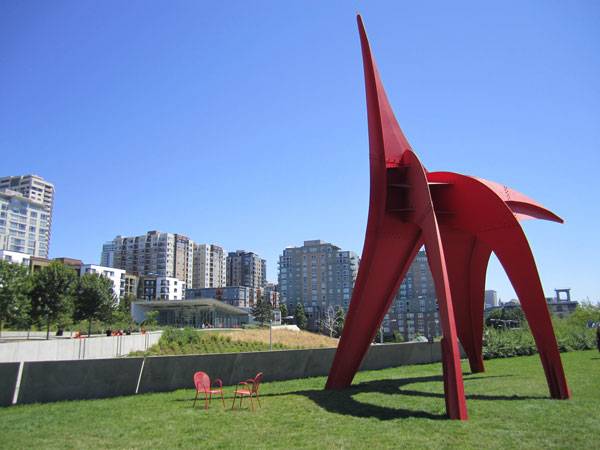 Sugar Beach is on the banks of Lake Ontario, in a very urban area surrounded by buildings and industry. The park provides not just a repose from the city, but a sugar-coated confection in the middle of it all. Inspired by a nearby sugar factory, the design evokes old-school candy imagery with bubblegum pink umbrellas, candy-striped boulders, and an illuminated water feature, making the park nearly Wonka-esque. 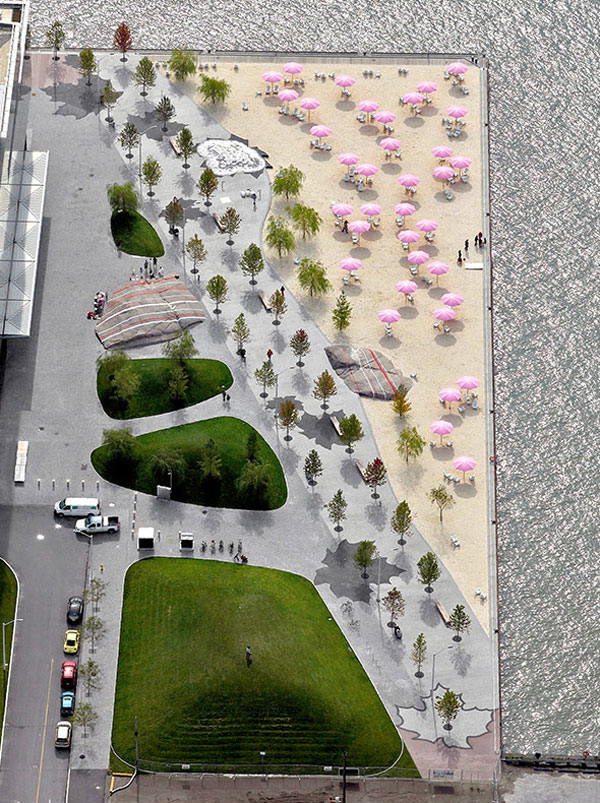 Gasworks Park was the site of a gas plant from 1906 to 1956, a serious source of pollution and a point of frustration and anger for the surrounding community of Wallingford. When the site was acquired by the city for a park in 1965, landscape architect Rich Haag’s intention to leave some of the plant’s towers as valuable and historical point of interest was controversial. Haag fought to keep the industrial past visible, while also designing more traditional sweeping lawns, a viewpoint hill, and wooded screens. Now, despite Gaswork’s rocky past, it is a beloved public gathering space and one of the most visible green spaces in Seattle. WATCH: KCTS 9 – History Making: Lake Union Stories

Shanghai Houtan Park is an exceptional example of designing landscapes to be functional, living landscapes. The site on the Huangpu River is long and narrow, following the river bank. It was once a brownfield, having hosted a steel mill, shipyard, and landfill. The design intent was to create a beautiful, safe place for visitors, to clean the river water, and to prevent flooding. This was accomplished by constructing a mile-long wetland through the park that cleans water from the very polluted river. Related Articles:

The wetland plants and soils remove nutrients, while a series of terraces adds oxygen to the hypoxic water. According to the American Association of Landscape Architects, the constructed wetlands can treat up to 500,000 gallons of polluted water per day. Visitors to the park can experience a safe and close connection to the water and plants in the wetland. They are encouraged to explore the wetland as a landscape feature and also as a functioning system. 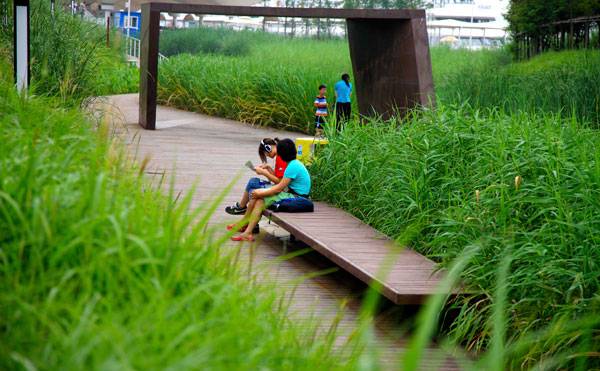 The C-mine plaza in Genk pays homage to its mining-town past while launching the urban plaza into the future. Materials were chosen for their aesthetic similarity to the coal produced by the mine and were made out of a waste product from the mining process. Buildings surrounding the square were mostly all mining buildings that now house elements of the cultural hub of the city. The square is vivacious, with a bright lighting design through the square and up the shaft tower that dominates the flat landscape. Its flatness is intended to make the square multi-functional and able to hold many people during large events. 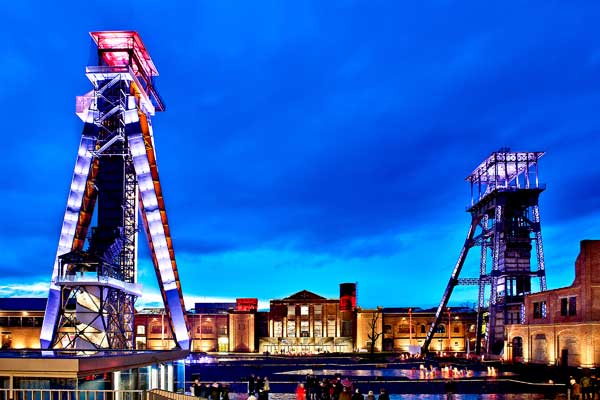 SteelStacks is a public park, cultural hub, and entertainment venue in what was once a Bethlehem Steel plant. Bethlehem Steel used to be the second-largest producer of steel in the United States, imprinting itself on the lives of the Bethlehem community. When the plant shut down in the 1990s, the people of Bethlehem rallied to have it conserved, saving the iconic structures and incorporating them into the campus. The blast furnaces from the plant still stand behind the Levitt pavilion, which is dramatically uplit at night, while the visitor center in the plant’s stock house was opened in 2012. 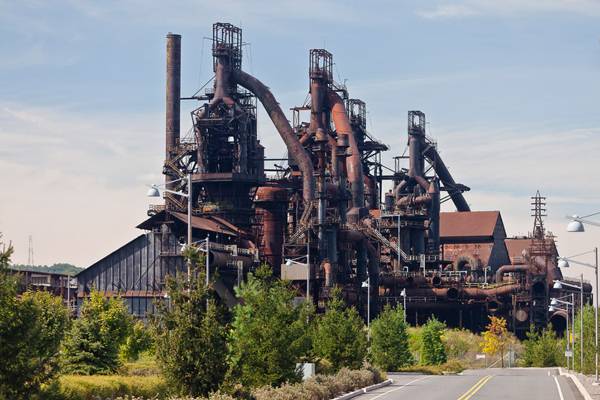 – Ex-industrial sites are here to stay, and more are created all the time. Finding potential in them despite their difficulties is a major challenge that modern and future designers will have to constantly face. Currently, a major trend is waterfront redevelopment. What do you think the next wave of challenging sites is going to be? How do you think these landscapes will change how people think about contaminated natural amenities?