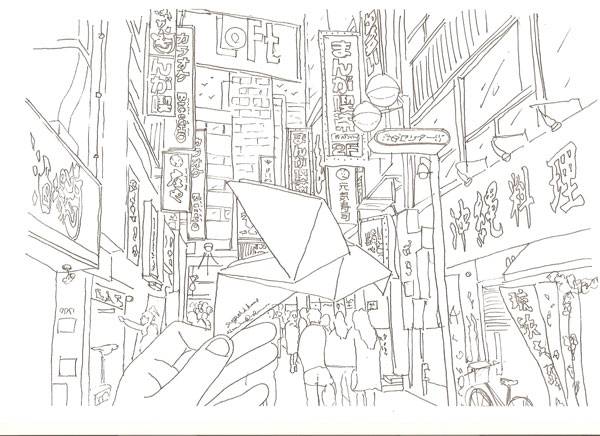 “The sketch came about following a semester of work during my architectural masters where we explored the temporary nature of paper and its lasting effects on people. I and a colleague visited the idea of creating paper origami peace doves with the thought of seeing how far they could be passed around the globe beginning in Sheffield, England. We carried out multiple urban art installations of hundreds of birds across the city. The sketch followed a simple black and white colorway in order to focus on the ideology behind the peace dove instead of losing its significance by adding color. I used a simple architect’s best friend i.e a black thin nib pen which, with my sketchpad, is always by my side. (Another reason behind the lack of color as it saves carrying different colors around!). we started to spread the birds across the country and eventually abroad and beyond which lead to my sketch”. 9. by Christopher T. Pugh, student at Academy of Art University, studying Landscape Architecture, in the United States of America, state of Alabama 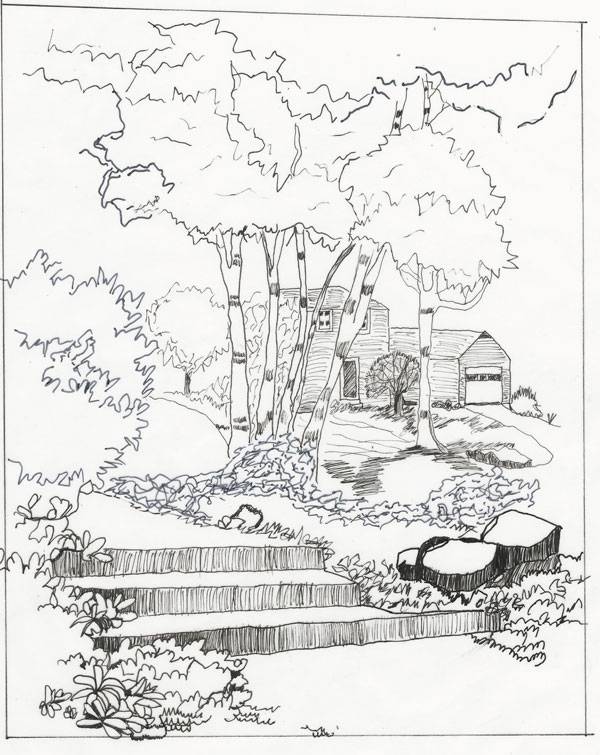 No description. If you are Christopher T. Pugh and would like to add a description for your image, contact us at office@landarchs.com 8. by Aytek Akçakaya, landscape architect for Modern Peyzaj,in Turkey WATCH >>> Landscape Design – Villa Project – Time Lapse Sketch Drawing


“This sketch was made for a presentation. First meeting with our customer. We tried to explain the design of the garden with this sketch. Then we use it to create a 3D animation. Style in which the sketch is made: Classic Rome Style. Location: Hadımköy/İstanbul/TURKEY. Material used: Copic Sketch Markers and Pigment Pens” 7. by Vakhtang Jmukhadze, archtiect, Georgia 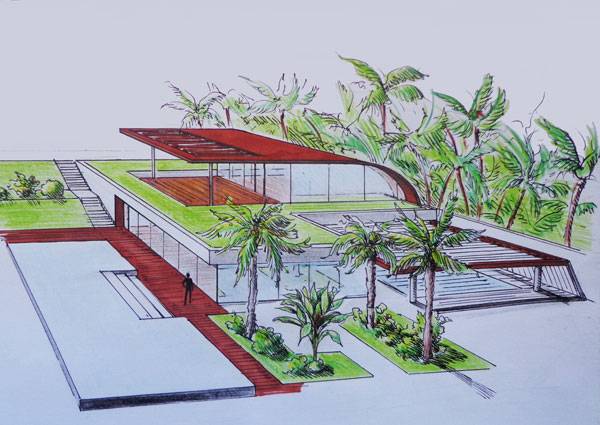 “This is a Tropical Villa Sketch, that is made during my idleness soon after graduation from architecture masters program. The motivation was simple – after hard work on my diploma I wanted to have a rest in tropics (or somewhere else :D). The sketch is made with simple colored pencils, brown marker and black ink pen on a simple A4 paper”. 6. by Simon Paulais, Student in Master 1 of landscape architecture in Angers, France and Student in landscape architecture in Freising, Germany 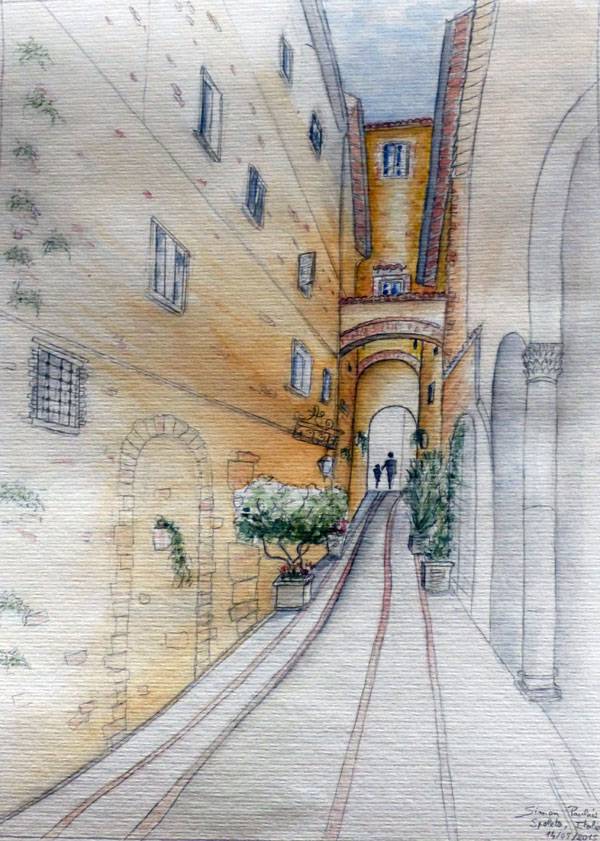 “I made this A3 watercolor sketch during a field trip in Spoleto, Italy, when I was studying landscape architecture in Germany as an Erasmus student. I found this little street very beautiful with its cozy atmosphere. I focused on the end of the street because all the light was coming from this side and I wanted to draw the viewers’ eyes to this particular point. I finally added the two people’ silhouettes to bring some life in the sketch and chose to keep some area free of color to enhance the vanishing point.” 5. by Charl justine Darapisa 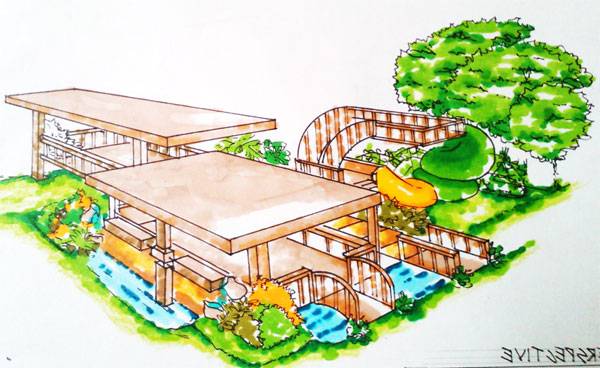 “Using color pencils and marker, this sketch was inspired by the combination of organic and synthetic materials that aim to devise a multi-nodal play equipment appropriate for any age. It was surrounded by bodies of water to add accent, sound, aesthetics and can be metaphorically translated as an ocean surrounding an island which is the entire play equipment. Softscape planting with clay jars and water mills were installed as well to create dynamism to the entire design. The openness of the pavilion also allowed the users to enjoy the entire play equipment while maximizing the surrounding view and giving them comfort, security and sense of place. Since the majority of the materials used were made of wood, this play equipment also aims to bring the users, especially the children, closer to nature while allowing them to reach their full imagination inside their playful mind”. 4. by Varga Bettina-Evelin, architecture student, Romania 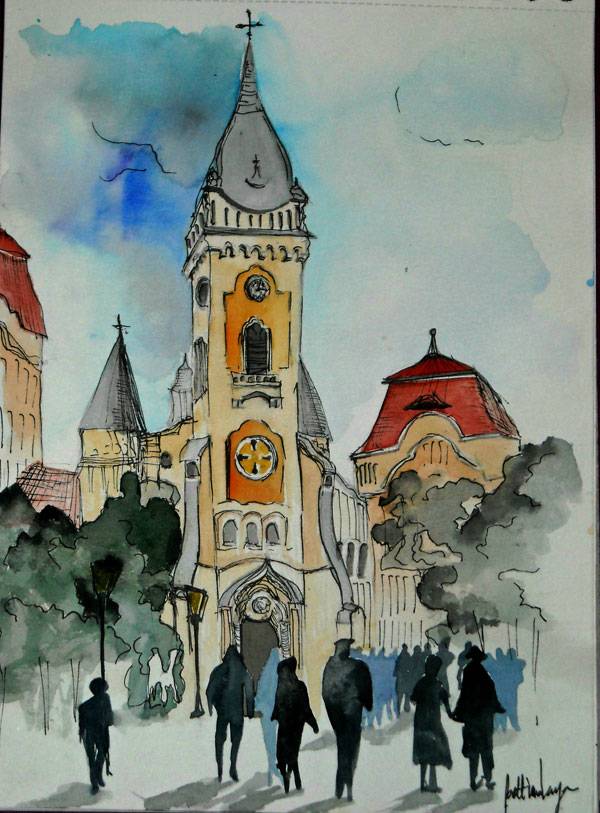 “This sketch was made as part of a study on the historic buildings in Timisoara, Romania. It represents the Catholic Gerhardinum School’s church tower and school. Sonnet watercolors and black liner were used”. 3. by Greg Mendoza, Design concept & illustrations, In association with A+K International, Chino Hills, California 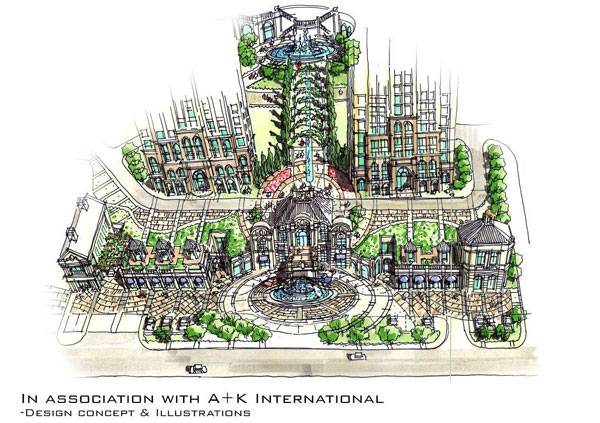 “Part of a presentation package for a project in Miaoling, Dalian, China. The sketch illustrated the concept of using podium parking roof as a residential park and perimeter retail shops to hide them from view. I used Pilot razor point pens for line drawings & AD markers for color”. 2. by Esteban Pisa,Architect, Bogotá, Colombia 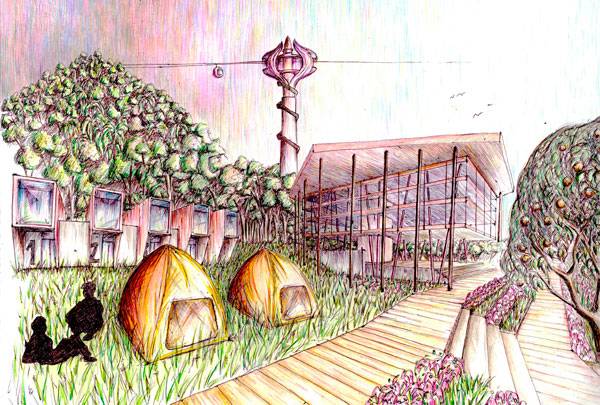 “This Sketch was made for a Colleagues’s project that consists of a Theme Park and Research Center around the vast diversity of Plants and Trees that grow and are found inside each of the Micro Climates that are generated in the Mountains of a specific region in Colombia”. 1. by Jan Kowalewicz 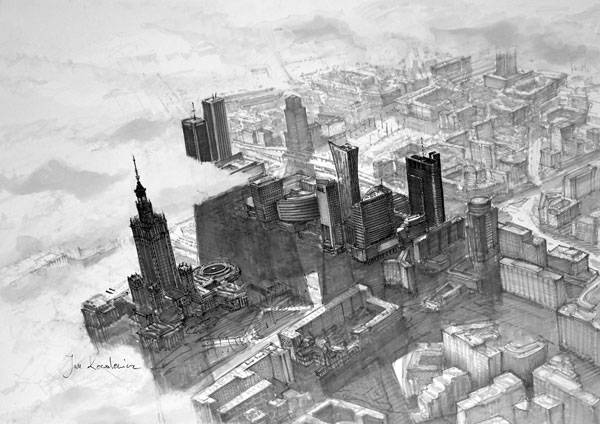 “I especially like drawing cities from bird’s eye view, as it is one of most detailed subjects. The drawing was a present for a friend who lives in Brussels on immigration. The picture is made using Tria markers and black finelinear on white paper size A2 – 420 x 594 mm. Located in the city is Warsaw – the capital of Poland, EU”. Link to Jan Kowalewicz’s Facebook page – That’s this week’s Sketchy Saturday Top 10, congratulations to all of you who featured, you have come out on top of a very talented bunch of people. Check out the Sketchy Saturday official Facebook album and see literally 1,000′s of incredible sketches! Follow all the winning entries on our dedicated Sketchy Saturday Pinterest page. If you want to take part send your entries to us at office@landarchs.com What did you think of this week’s top 10? Let us know in the comments down below! Go to comments Recommended reading: