10 Outstanding Landscape Architecture Projects of 2014. Every year, the world becomes home to new, innovative projects in landscape architecture. And every year, the designers behind these projects eagerly await recognition for their hard work. Looking at new technology, public attitudes toward the space, and awards received, the following list is a showcase of some of the best of 2014.

10. Segment 5, Hudson River Park, A Resourceful and Resilient Space for a Park-Starved Neighborhood, New York, NY – Michael Van Valkenburgh Associates Segment 5 is quickly becoming the most popular spot in the former “parkless” New York City neighborhood of Chelsea. This was no mistake: Designers worked closely with neighborhood residents to develop a plan that met their needs, as well as those of the state and the city. The site boasts a three-acre lawn, where pickup sports and outdoor yoga classes are a common occurrence, and participants are sheltered from the West Side Highway by the dramatic landform bowl. WATCH: Hudson River Park: A New York Treasure 9. Sherbourne Common, Toronto, Ontario — Phillips Farevaag Smalleberg As a winner of the 2013 ASLA Honor Award for Design, this space has been around for more than a year. However, it continued to make headlines throughout 2014. Sherbourne Common, a formerly neglected brownfield site on Toronto’s waterfront, combines a storm water treatment facility with landscape, architecture, engineering, and public art to provide an outdoor living room for the new residents of the East Bayfront community. WATCH: Grand Opening of Sherbourne Common North 8. Hunter’s Point South Waterfront Park, Queens, NY – Thomas Balsley Associates and Weiss/Manfredi This site is surrounded by water on three sides and offers a spectacular view of the Manhattan skyline across the East River. Two hundred years ago, the site was a series of wetlands, but eventually was overtaken by industry. Designers were asked to combine these two aspects by using landscape architecture, architecture, and engineering to create a space that would use sustainability to blur the lines between infrastructure and landscape. 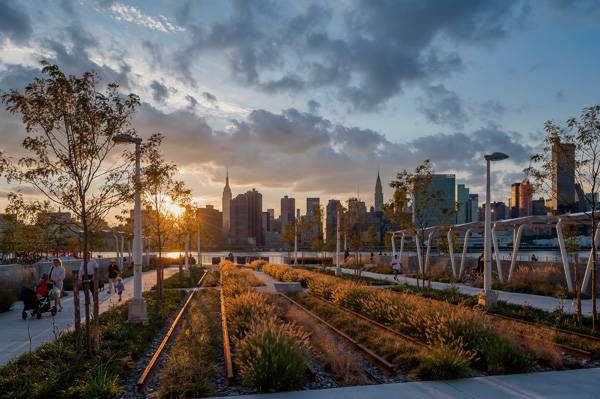 7. Laurance S. Rockefeller Preserve, Grand Teton National Park, WY – Hershberger Design As the first project within the National Parks to achieve LEED Platinum standard, this project doesn’t scream manmade sustainability. Rather, designers sought to give the design a light touch that appears to be completely natural and untransformed. Hershberger looked to the stunning and awe-inspiring qualities of the park, and took away all evidence of man to return it to its native condition to create a truly unique experience for visitors. 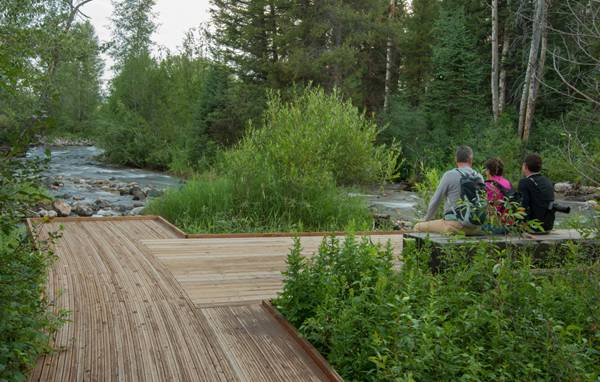 6. The Park at Lakeshore East: Chicago, IL – The Office of James Burnett Nicknamed the “village in the heart of the city,” by local developers, this is a park that was built for the people of Chicago and has attributes to attract people from all walks of life. The space lies at the center of a redevelopment that will include residential, commercial and retail space, as well as, an elementary school. It aims to fill the needs of all these different spaces, and it does this while also becoming a centerpiece in the world famous Chicago park system, and a rival for the historic Millennium Park. Related Articles:

The Park at Lakeshore East, Chicago, IL. Credit: The Office of James Burnett

5. Low Maintenance Eco-Campus: Vanke Research Center, Shenzhen, China – Z + T Studio, Landscape Architecture In a country known for its growing urbanization, the design team for this project wanted to show that sustainability and low maintenance were still possibilities in the urban landscape. Three issues were addressed in the design to achieve sustainability: Storm water management, low-maintenance construction, and planting material all combine here to create an educational and experimental space that is being used to address the numerous environmental concerns of the nation.

4. The Landscape of Memory: Poppy Plaza, Calgary, Alberta — Marc Boutin Architectural Collaborative, was the primary designer and lead for the commemorative aspects of the public space, as well as the hard landscaping: weathering steel and balau wood decking.  Stantec, the associated firm, was responsible for the soft landscaping. The park was built to commemorate citizens who served in World War I to protect the freedom and security of the Canadian people. The river walk is the second phase of the Landscape of Memory and is designed to move visitors from the upper roadway down to the riverbank. Wood and “folded” steel components are interspersed with illuminated trees to provide a sense of nature. And to truly generate contemplation, the project draws upon the emotive qualities of the river to evoke remembrance by visitors. 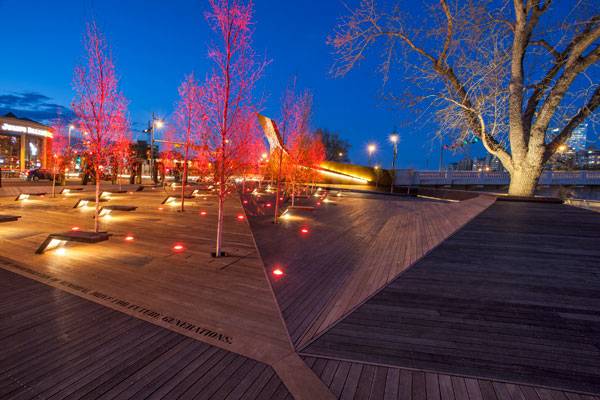 3. Slow Down: Liupanshui Minghu Wetland Park, Liupanshui, Guizhou Province, China – Turenscape This project used regenerative design techniques to address water pollution, flood and storm water inundation, recovery of the River Shuichenghe, and creation of public space to transform a deteriorated urban site into a nationally celebrated wetland park. The site is a major part of the city’s ecological infrastructure and is using much needed ecological services to cleanse water, recover lost habitat, and provide a gathering space where people can have access to much needed quality public space. 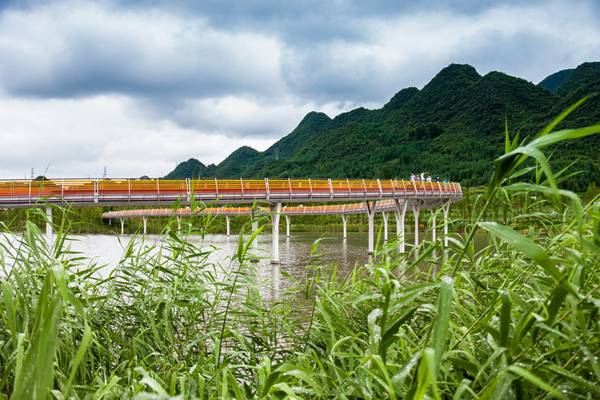 2. Bill & Melinda Gates Foundation Campus, Seattle, WA – Gustafson Guthrie Nichol As the recipient of the 2014 ASLA Award of Excellence, this project took a contaminated 12-acre parking lot in the heart of Seattle and transformed it into an ecologically and socially sustainable site where employees can interact while also regenerating the surrounding community. This project falls under the foundation’s principles of having a global mission with local roots and to “help all people lead healthy, productive lives.”

1. National Arboretum, Canberra, Australia – Taylor Cullity Lethlean in collaboration with Tonkin Zulaikha Greer and David Lancashire This project combines 100 forests of endangered tree species from around the world on a 250-hectare formerly fire-ravaged site to bring attention to issues of sustainability, biodiversity, and public environmental concern. 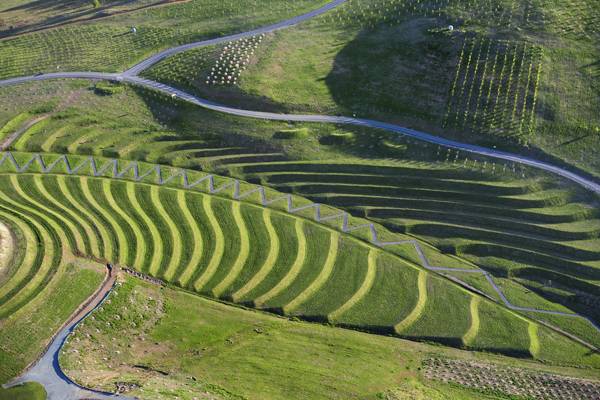 As the recipient of the 2014 World Architecture Festival’s Landscape of the Year Award, this project proves that landscape architecture is about more than just aesthetics. The 100 forests not only provide a unique experience, but also serve as seed banks from which endangered species are being preserved and propagated, all while allowing visitors to explore and learn the significance that trees, gardens, and plants have on the contemporary world. Each of these projects, while different in style and significance, stand to show that landscape architects are truly the stewards of the built environment. By creating projects that not only attract the public, but also serve as educational opportunities, landscape architects are afforded with the opportunity to truly change the world, one site at a time. Recommended Reading: