The Red Ribbon Park, Qinhuangdao City, Hebei Province, China, designed by Turenscape At the beginning of the 21st century, the eastern area of Qinhuangdao city, along the Tanghe River, was engulfed by an intensive urban expansion, being quickly surrounded by new developments. Despite its difficult access and unhealthy conditions, the river area was one of the few options for outdoor leisure for residents of nearby communities. The place was an important green area, since it maintained the vegetation supporting wildlife habitats, but there wasn’t any effective structure for the people who came to swim or fish. The landscape featured native plants and animals sharing the space with a garbage dump, challenging the professionals to create a solution to meet residents’ needs while revitalizing the long-neglected riverbanks on the outskirts of the city. 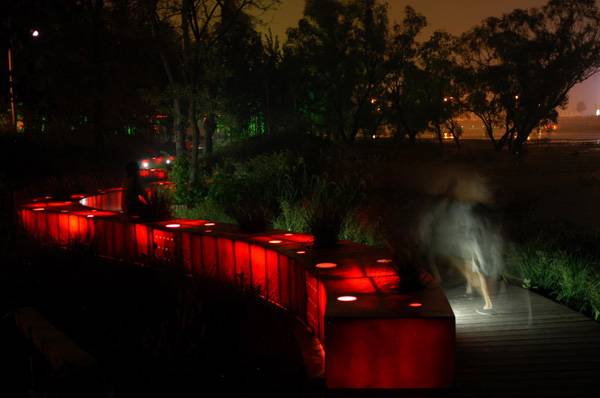 Among the ideas was a proposal to pave the area with concrete and construct flower beds, which probably would have transformed the riverbanks into more functional spaces, but that would not have favored the city’s integration with nature.

An Ecological Solution Preserving the Natural Landscape and Culture

A proposal in a contrary direction prevailed, developed by a firm whose own name emphasizes its philosophy of uniting humans and the land: Turenscape – a mix of two Chinese words, Tu (land) and Ren (people), with the English word scape — aims to create harmony between land and people. 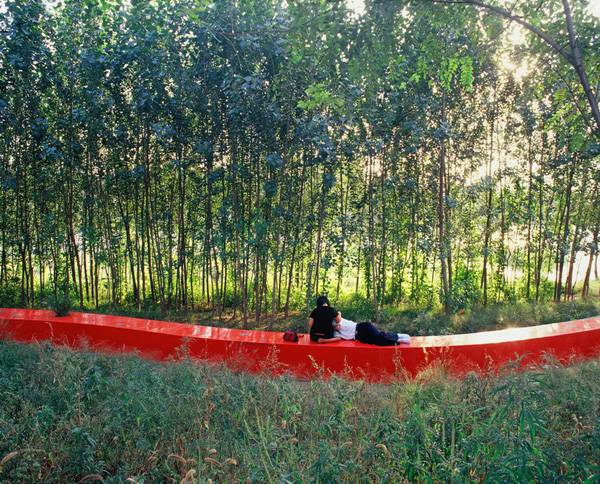 The Negative Approach   According to the designer Kongjian Yu, in an interview with ASLA, the project was based on his idea of “negative approach” with the goal of preparing an ecological infrastructure that could work as the basis for other kinds of planning. His idea is the reverse of conventional urban planning, which generally addresses  population growth and is more focused on a city’s economic development. Related Articles: 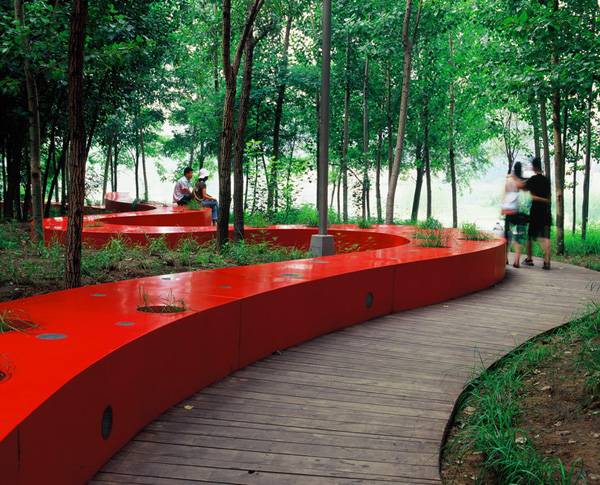 Stormwater management systems, biodiversity, and green corridors Kongjian Yu’s design changed the focus to the landscape, to make it lead the urban planning process by providing a green infrastructure to integrate stormwater management systems, biodiversity, and green corridors. This structure provides ecological services for the residents, such as recreation, sports, environmental education, and clean air and water, all through an effective use of the available resources in the city. 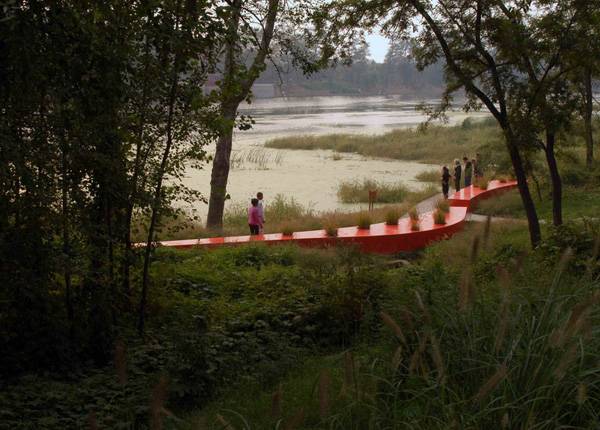 The Importance of Identifying with a Space Another important aspect of preserving the natural landscape is that it also maintains the cultural heritage, enabling residents to identify with the place. And to create an even more inclusive atmosphere, the Turenscape team included a component that provided the additional functions people were expecting from the urban park. 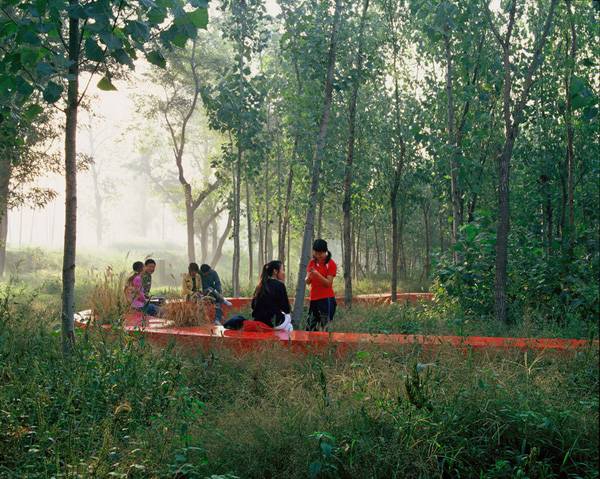 The Red Ribbon Seating, lighting, and walkway came together in one solution — the Red Ribbon, a 500-meter-long curvilinear bench, built in fiberglass and steel to be the structural and organizational element of the 20-hectare park, making it a reference of contemporary landscape architecture. 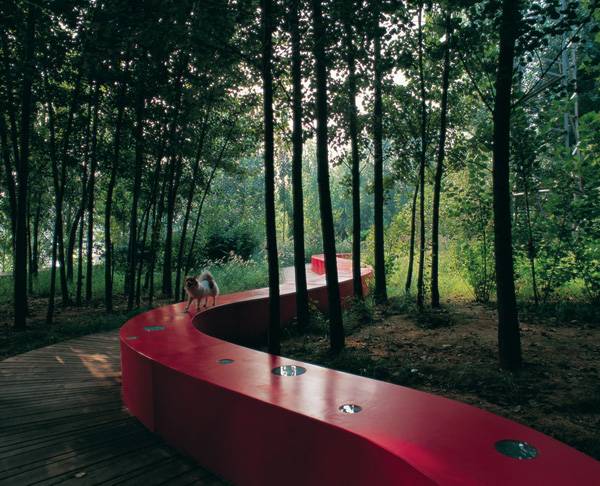 The Red Ribbon guides the visitors through their discovery of the natural biodiversity and the added gardens with its vibrant red color and snaking shape, compounding a metaphor of the vital energy — the mythological  “breath of the dragon” — which, according to Chinese tradition, maintains the space as alive and successful. Technology helps to achieve a better performance The red of the bench makes a bold contrast with the green of the surrounding vegetation, and a dramatic effect is created at night when the ribbon is lit from within. This energetic waving form makes a reference to fire, which, along with steel, gives the landscape a modern interpretation of the millenary Chinese knowledge of the harmony resulting from the cycle of creation and destruction of the five natural elements. While the site already featured water, earth, and wood, the red ribbon suggests — through its material and color — metal and fire, integrating its symbolic characteristics with its functional and aesthetic roles. 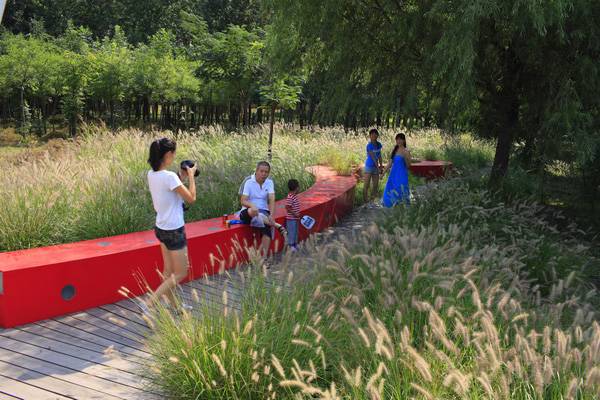 The Red Ribbon and Attention to Detail The chosen material gives lightness to the ribbon, minimizing its interference on the site and blending it with the plants and animal paths. Perforations on its top side allow plants to grow through the ribbon; some crossings for small animals were built. The material enables the ribbon to work as a fluid volume from which it is possible to observe the existing vegetation and the four added gardens, composed of white, yellow, purple, and blue flowers. 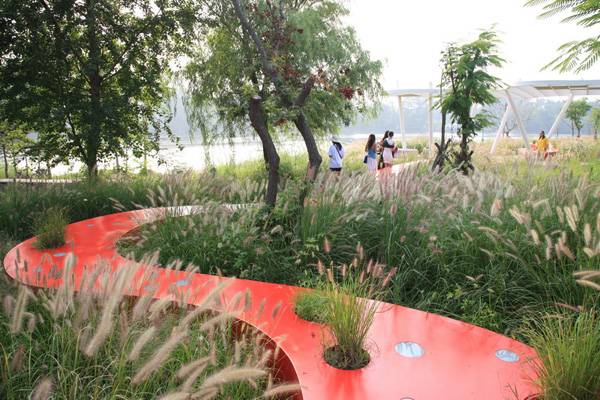 Fiberglass and steel also brought modern technology to the park, complemented by the four adjacent pavilions featuring curved forms that suggest clouds, creating the sensation that the shelters come naturally from the sky. The Benefits of the Sustainable Design The concept of complementing the natural landscape with the lowest intervention was the key point to achieve the goal of preservation. The architecture element just took a slight portion of the land, by adjusting itself into the curves of the riverbanks to provide the functions users were expecting. 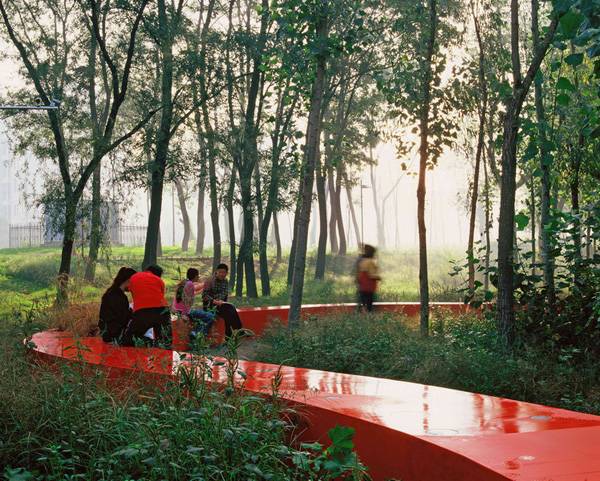 Neither its minimalism nor its curvilinear shape derived from preferences for one style or form, but resulted from the architecture program and the site’s characteristics. The design created a synthesis of several roles and took the opportunity offered by the site to recreate the landscape and emphasize its features. Below: Enjoy all the incredible pictures of The Red Ribbon Park courtesy of Turenscape The Red Ribbon Park has been demonstrating, since its implementation in 2008, the benefits of designing with nature and introducing minimal artificial elements. It is a sustainable landscape, built upon the concepts of simplicity and harmony, so, instead of drawing a line between the city and nature, it composed a hybrid environment, providing the advantages of both the urban and natural spaces and enabling the efficient use of its resources. Furthermore, the design conciliated the characteristics of the contemporary spaces with the local traditions, satisfying the residents and being internationally recognized as a wonderful river park. Recommended Reading: