On 1 August 2015 the complete Mariahilfer Strasse project was finished and opened to the public and we’ve got some great new photos to show it off.   The opportunity to redevelop an already popular urban thoroughfare into the longest stretch of shared space in Europe does not come along every day. An international design competition was held for design firms and companies of all areas to propose the future for the unique late 19th-century site, Mariahilfer Strasse in Vienna, Austria. Vienna, the acting capital of Austria, has roughly 2 million inhabitants and serves as the country’s most frequented city for tourism. Downtown Vienna is bursting with activity. Cafes and restaurants line the streets and the selection of department and specialty stores provide visitors and locals with anything they could imagine. In addition, part of the Viennese subway system runs half the length of the Mariahilfer Strasse, making it an accessible and busy place. The city is already buzzing with life and the reimagining of the Mariahilfer Strasse, or as locals call it “mahü“, left it open for new possibilities regarding urban development. 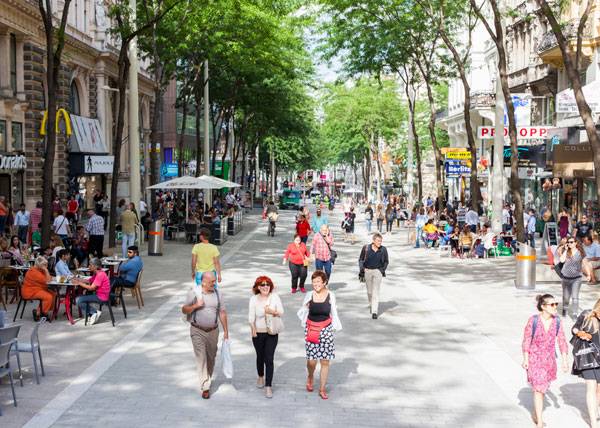 Who Won The Boulevard?

Winners of the design competition in 2012 were Amsterdam-based Bureau B+B urbanism and landscape architecture. and Vienna-based architects orso.pitro. Their design reaches a total length of 1.6 kilometers and stretches from the Westbanhof to the Museum Quarter. Building began in 2014 and was celebrated July 30, 2015 through Saturday, August 1st after 11 months of construction.

The creation of pedestrian-friendly spaces as a top priority left part of the street closed off for vehicular traffic. In lieu of increased traffic speeding through the site and creating a disconnect, the design team divided the site into three different zones. 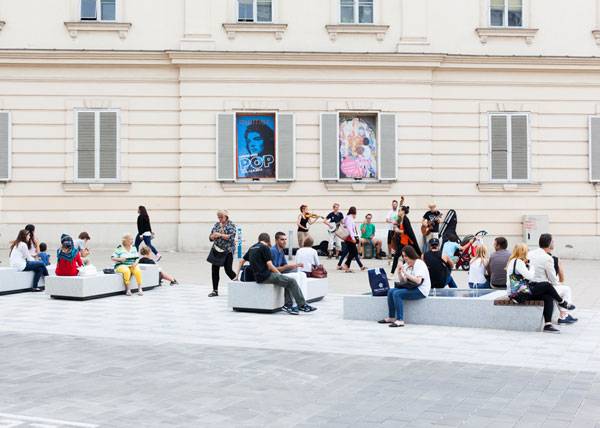 The Heartbeat of The Site

Taking a look at these zones you will notice that the central zone acts as the heartbeat of the site, where visitors are bustling from shop to shop, stopping at the occasional cafe to relax, and enjoying the vibrant atmosphere. The neighboring zones on each end of the central space were designed to drift from the more dense shopping and pedestrian space to shared and mixed-use spaces such as businesses, housing, institutes, and private use. 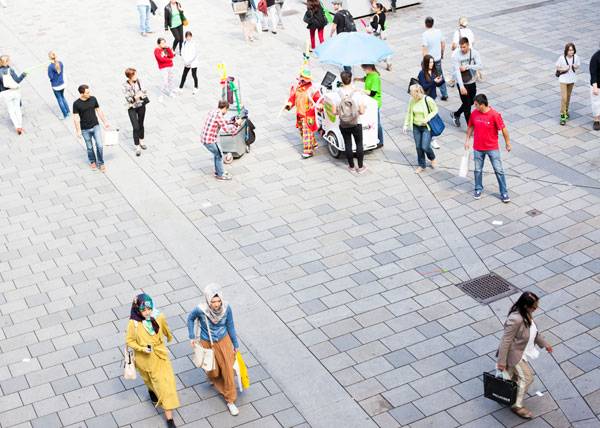 The design was built around the objective of providing as much street space as possible for cyclists, pedestrians, and recreational uses. Some of the design applications included urban street furniture and the treatment of the paving. The street is paved completely from side to side in light granite. Subtle cues such as the orientation of pavers help to inform visitors the implied use of the street section. The decision to use a material outside of traditional asphalt not only looks more visually appealing but creates a sense of place for visitors entering the site. 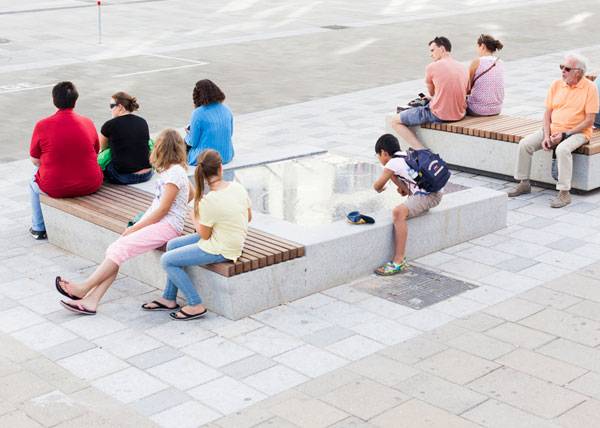 Since a section of the thoroughfare is car-free, the paving seems even more friendly. The use of urban street furniture also helps to integrate the streetscape with its users, allowing for an area of abundant recreation. Existing trees were given large planters, solidifying their lofty presence. The furniture is sleek and modular providing concrete blocks topped with Cumaru wood for both benches and platforms composed in all sorts of shapes and arrangements. 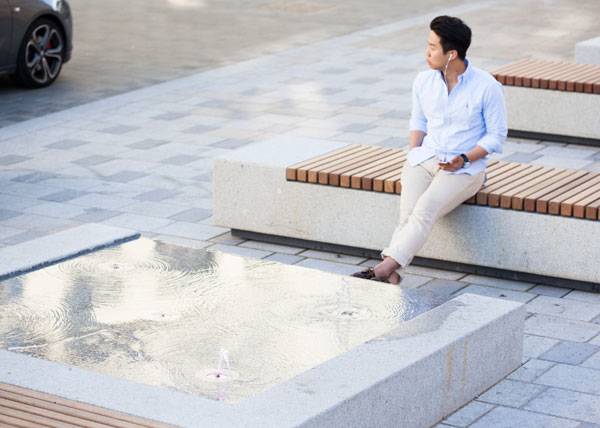 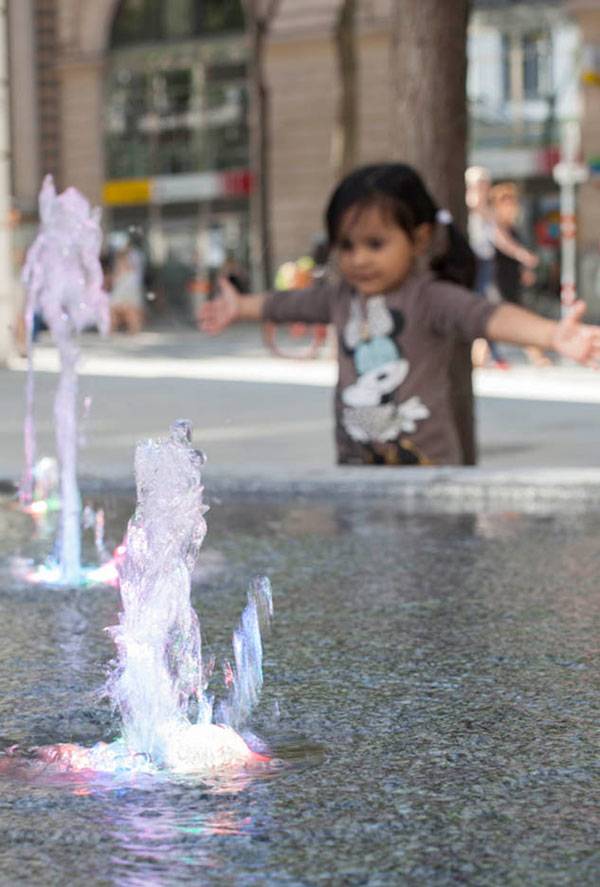 The Mariahilfer Strasse is not only a local favorite but a favorite amongst tourists and visitors alike. Its function as a recreational and pedestrian-minded place is well executed through the design by Bureau B+B urbanism and landscape architecture and orso.pitro. It is amazing how powerful something like a paving pattern or street furniture and circulation can be. Boulevards, alleys, promenades, and street squares are all unique in their own right. This boulevard, in particular, was able to be modernized without losing its energy and appeal. Many of us have experienced the feeling of walking down a street and enjoying it so much that you want to spend the entire day there. 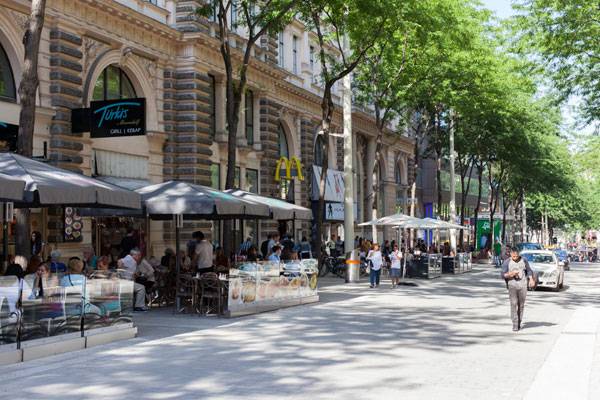 While the Mariahilfer Strasse is quite expansive, you can find spaces that accomplish the same feeling with much less space, such as alleyways that are constantly being redesigned as social spots. Urban design principles such as placing emphasis on people and experiences rather than vehicles can be applied anywhere. In the last few years, urban renewal has sprung into the forefront of redesign in cities. People are thinking more about what makes their city special, what will draw people in, and what will make them want to come back. The boulevard has been around for a while, but modern adaptions like exposure through social media and a modern redesign help keep it functional and current, Mariahilfer Strasse even has its own Facebook page. 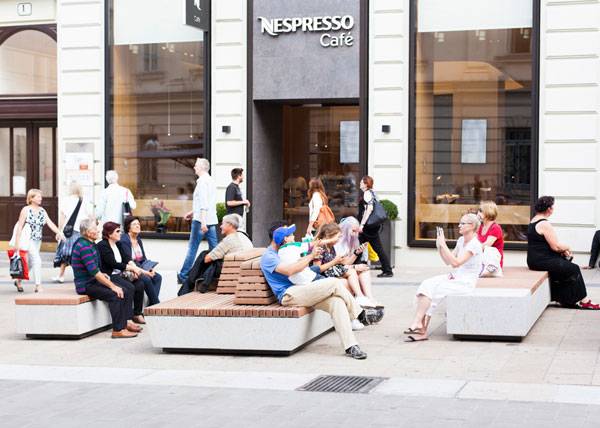 Simple things like a few bright chairs and a table, or a planter box full of flowers outside a local business can completely change the way a street feels. So much of our lives today revolve around getting places, but designs that focus on providing an experience, while allowing you to relax and enjoy is what will help drive the evolution of urban design and redevelopment. Do you think designing for people first and vehicles second is a smart move? 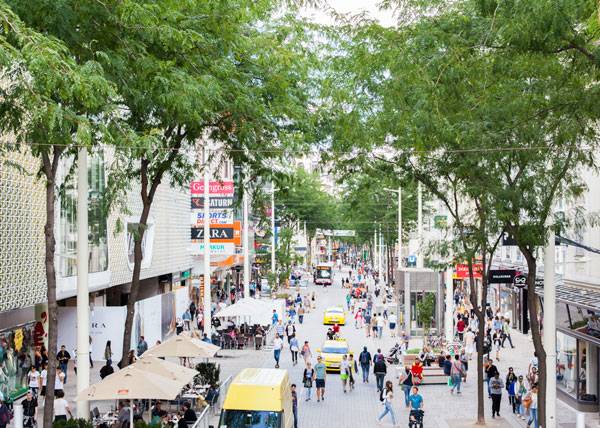