Green roofs are sprouting all across North America, replacing bare rooftops with lush, environmentally friendly gardens. According to Green Roofs for Healthy Cities (GRHC), the green roof trend experienced a 10 percent growth rate in 2013. The green roof and wall industry association’s annual green roof survey showed Washington D.C. leading by a wide margin, in a trend that if continued, could dethrone Chicago’s title as the green roof capital of the United States. 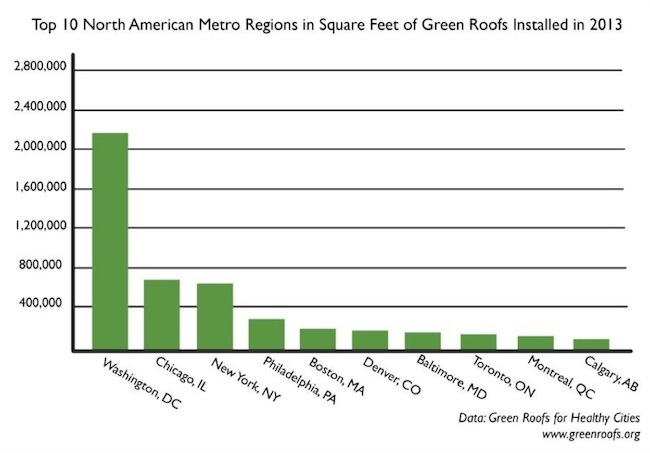 “We are pleased to see the continued expansion of the green roof market,” said GRHC founder & president Steven W. Peck, GRP in a press release. “The industry’s continued growth is fueled by the multiple public and private benefits green roofs bring, such as stormwater management, reducing the urban heat island, energy savings and green jobs. With supportive public policies like those in Washington DC, we will make progress toward achieving the industry goal of one billion square feet of green roofs installed by 2022.”

Although the prevalence of green roofs might not have caught up with the likes of Europe just yet, the growing popularity of this environmentally friendly trend is encouraging. Washington, D.C., which leads the pack for the second year in a row, installed over two million square feet of green roofs in 2013. Part of that growth is driven by a number of public policies D.C. adopted to support green roof investment, such as rebates of $7 – $15 per square foot per green roof installed and credits for reducing stormwater flow.

Among the top ten North American metro regions investing in green roofs, half are located in the northeastern region of the United States. Canadian cities Toronto, Montreal and Calgary bring up the tail end of the list.