Lonsdale Street, by Taylor Cullity Lethlean Landscape and Urban Design and BKK Architects, in Melbourne, Australia. Modern cities with interesting architecture and good infrastructure still have problems with green spaces. We have noticed that public squares are sometimes underdone or misused. It happens everywhere, but what is the first step to change this situation? First and foremost we should study excellent urban projects. Doing this enables us to take a fresh look at the matter or even find inspiration. On the other hand, we are able to find solutions to urban problems, such as heavy vehicular traffic. Development of motorized transport has had a major impact on the shape of cities. Wide pavements are being replaced with parking and roads. However, when public squares focus on pedestrians instead of cars they can become examples of successful design. Lonsdale Street is a fine example of this much needed balance between ecology and human needs. This extraordinary project is located in one of the suburbs of Melbourne, Australia – Dandenong. It is a prosperous retail spine with many shops and a dynamic produce market situated here. So it makes this area a unique and significant space in the city. Due to the retail located here, there is also a lot of traffic congestion, which has had a strong impact on the shape of the boulevard. This congestion is what inspired city officials to finally fix the problem. A public consultation confirmed the cultural and physical potential of Lonsdale Street and encouraged officials to make a change and start the revitalization process. After many discussions on the street’s former shape, Australian architects from BKK studio were ready to face the challenge. In 2011 their incredible project was finished. Lonsdale Street had been transformed into a premier boulevard and a gateway to East Victoria. 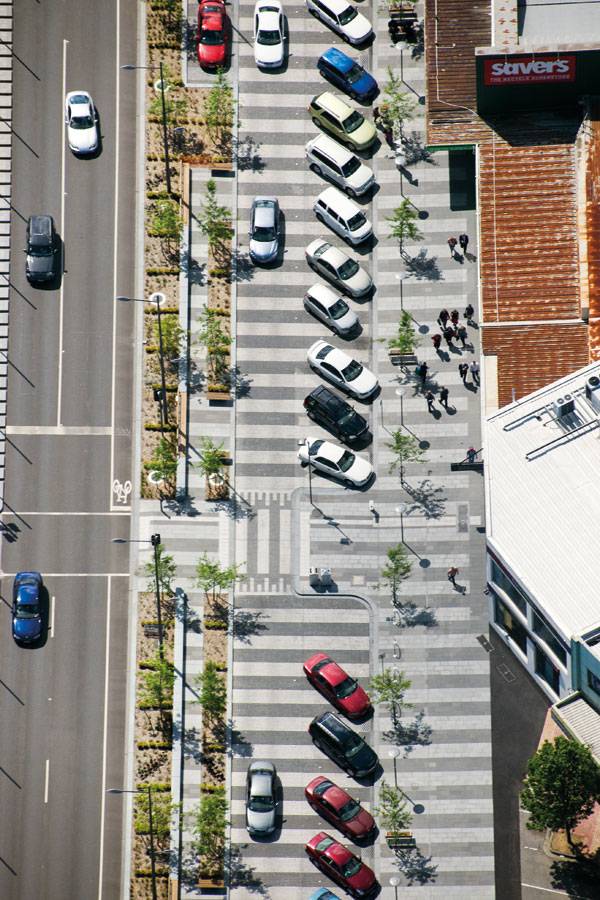 When we look at Lonsdale Street from a bird’s eye view, we can notice that nothing is random or unnecessary here. Parallel lines found in the flooring and more subtly in the long road, with two lines in each direction and a pedestrian area with parking are what catches the eye. A natural barrier – trees, divides these zones. They not only bring oxygen, but also create a secluded spot where people can rest or simply relax. This is what we notice first, but why is Lonsdale Street unique and very interesting for landscape architects? Focus on the Function

First and foremost, Lonsdale Street is a well-organized space. Vehicular traffic is considered and it is not disturbing to pedestrian movement. Therefore, it is no wonder that people from Dandenong simply love this place. They can comfortably park their cars, go shopping and then take a break in this amazing area. Wooden benches invite everyone to sit under pin oaks trees and low bushes help create the right atmosphere. The street is known for being a marvelous place, which certainly no one wants to leave. On the other hand, the ecological aspect is also significant. Lonsdale Street is perceived as an environmentally friendly space. Not only does Dandenong’s public square produce oxygen, but it also saves the city a lot of money, which city authorities in other towns must spend on items such as water bills. How is this possible in a tremendous metropolis such as Melbourne? The answer is surprisingly simple, a linear garden along the length of Lonsdale Street is reusing storm water for irrigation purposes. Lonsdale Street is not only a great place to hang during the day, but also at night. If someone thinks that Lonsdale Street shuts down when the last shop closes – they would definitely be wrong. It is a lively place even in the evening. Vertical street lamps, designed by Electrolight in collaboration with Daniel Sequeira, line the street and glow in a rainbow of colors. These lights attract people’s attention and make Dandenong’s public square a special meeting point for townsfolk, at any time of the day. There is no getting around the fact that, in recent years Lonsdale Street has positively changed into a desirable place that everyone is talking about. For the first time in a long while, designers noticed vehicular traffic’s consequences and created a solution. This project is known for being well thought out and responding to the people’s needs, as well as ensuring a balance between the environment and architecture. People of Melbourne should be proud that one of the most captivating urban projects is situated in their city. 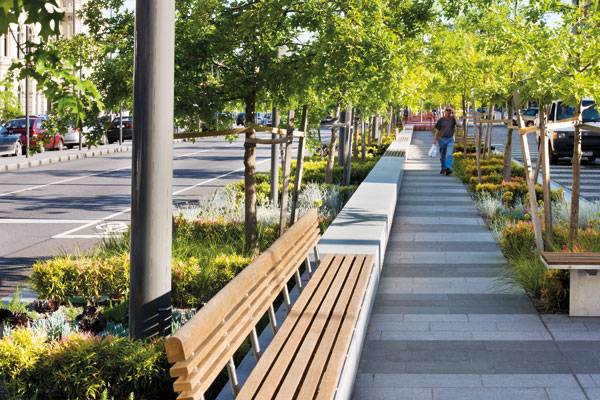 It doesn’t happen very often that highly urbanized areas are in dialogue with nature, proving that there is always a chance to connect function with aesthetics. Undeniably, this public square design is an inspiring example of revitalization that returns public space, dominated for many years by cars, to the pedestrians. Do you think that some elements used for Lonsdale Street’s revitalization process could be applied to neglected public spaces that urgently need intervention by landscape architects?