HOSPER propose stunning entry for Moscow Park Russia competition. In 2013, International Architectural Competition Park “Russia” chose HOSPER landscape architecture and urban design firm’s design as the second place finalist, and moved onto Stage II of the competition. HOSPER designed the project with a team including Niek Roozen (landscape architect), Cepezed (architecture) and Witteveen+Bos (engineering and consulting). The contest asked designers to create a final concept and financial model of the Park that would “convincingly demonstrate the natural, ethnic, historical and cultural diversity and richness of the Russian Federation and reflect the identity of its constituent regions in the context of their shared culture and history.” Contestants were asked to create proposals that “cover the general urban planning, master planning, design, landscape, architectural and economic solutions for the Park as a whole and for its particular units, which should be ecologically efficient and innovative.” Proposed Design HOSPER’s design met all of the guidelines while also remaining creative, thoughtful to the site, and beautiful. HOSPER describes their project as being inspired by Russia. “The Russian culture with its cities and buildings, and the Russian heroes in art, sports, literature, astronautics and warfare. The spectacular and diverse nature of Russia has also been of great inspiration.”

The site is located on a 30-meter high hill and the design takes advantage of the existing forests and water structure to layout the park. The design team located all of the required park elements in general proximity to these natural conditions, which were preserved to form the network of green infrastructure. 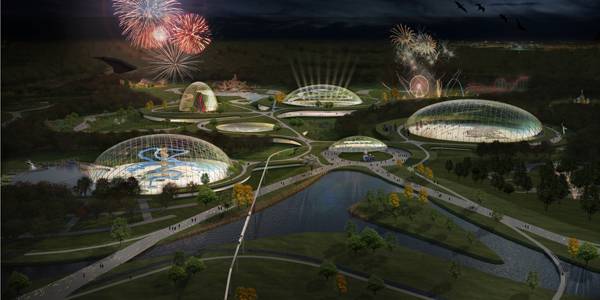 The design creates a central park that is more urban in context while the outskirts remain more natural. The design team integrated the existing water into the design and also introduced a new water system in and around the central park. According to HOSPER, “The park has been divided into six functional units (the commercial-, entertainment-, nature- and sports unit, and a unit for future development) from which all the elements of the park radiate. Each unit has a central plaza, and the public open park in the middle of the site connects them all.” 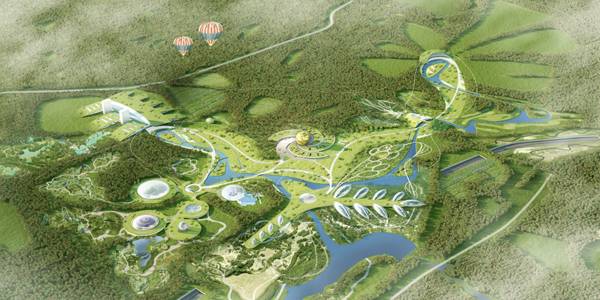 Each unit has a unique theme and every building in that unit repeats the theme, which gives each unit its own distinct feel. While every building is different, they share commonalities such as a green space and recreational route on their roof. And every set of buildings is encased under a big glass dome. “The buildings are interacting with the squares and the central park: they embrace and go over into one another.” 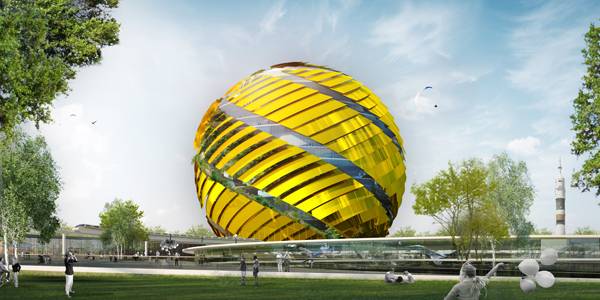 Russia Globe Building At the center of Park Russia is the Russia Globe building, a golden, swirling ball. This iconic building will serve as the main entrance and inside visitors can learn about what the real Russia is all about. Designers hope that it will serve as a landmark for all visitors. In addition, the Russia Globe, will serve as the main transportation hub for the park. Visitors will arrive by a direct train from Moscow and the Domodedovo International Airport, where they can connect to a monorail system that will carry them in comfort to the various units and parking lots in Park Russia. 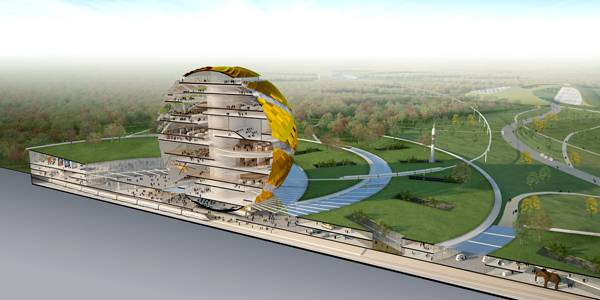 “Sustainability is one of the cornerstones in the conceptual design of Park Russia; in the buildings and the water- and energy supplies, but also in the waste conversion to energy and products. Transportation in the park itself relies on a monorail-route and the use of electric cars along snow free routes through the central park, next to the use of bicycles and boats.” 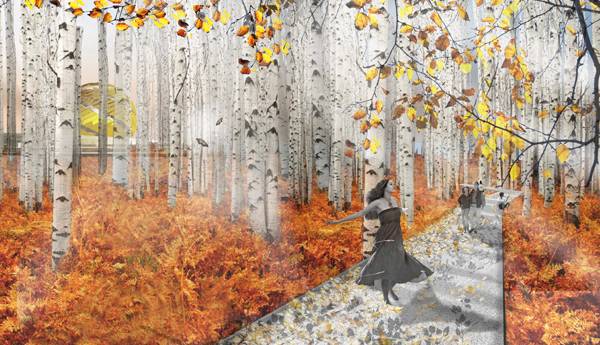 While this design was chosen as a second place finalist, HOSPER, along with four other finalists, will be given the option to “participate in the group of architects developing the project and be engaged in the preparation of the project documentation at a later stage of implementation of the project.” Other articles HOSPER have featured in: Top 10 Imaginative Squares Private Estate Reveals State of The Art Underground Car Park Recommended reading: Landscape Architecture, Fifth Edition: A Manual of Environmental Planning and Design  by Barry Starke Article written by Erin Tharp Published in Blog