When the frost hits, most of us do the final weeding, trimming and covering for the winter and dash inside for a cup of cider and a book by the fire. But not all winter landscapes shrivel up and hibernate for the snowy months. In their stark, skeletal state, some gardens reach their peak of breath-taking beauty. In fact, there are landscapes designed to be winter wonderlands. Their summer glory is minimal compared to their winter splendour. Stripped of all show, the structural elements of the plantings create an interesting contrast to the severity of the surrounding landscape. The concept that ’winter is only the beginning’ has influenced Bodnant Garden in North Wales, UK, has been appreciated by Kenrokuen Garden, Japan, and captured by the Gruyères Castle garden in Switzerland.

A different perspective under snowfall

For the first time in history, Bodnant Garden in North Wales, UK is announcing the opening of its winter garden this year. While it is worth a long look during the warmer months, especially with its renowned botanical collection and living covered walkways, the garden is magnificent with its lush foliage replaced by a skim of snow. 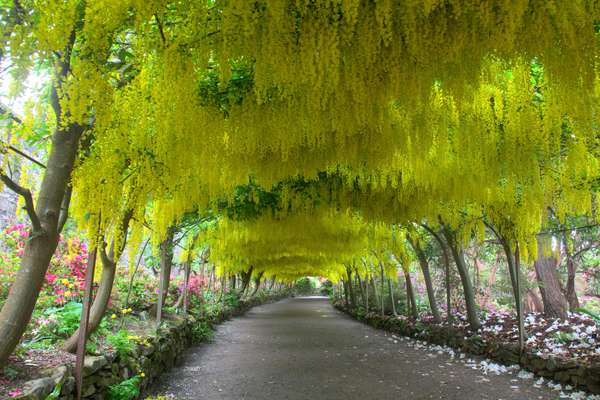 How would the Bodnant Gardens hold up in the winter? ; image credit: Gail Johnson / shutterstock

The viburnum arch that is ablaze with yellow flowers in May is transformed into a grid work of shadow and a light blanket of snow. The gorgeous bridge that spans a waterfall becomes the backdrop to an ice-encrusted panorama. With plenty of existing plants such as cornus varieties to add color and texture when devoid of leaves, Bodnant Garden has had the foundation of a winter collection for many years. Using part of the 32-hectare space, an overgrown thicket has been replanted with shrubs and winter flowering plants that have the greatest appeal during the cold season. With over 50,000 visitors during the summer months, Bodnant Garden is sure to draw in crowds with its new frosty display.

In Japanese tradition, snow is considered to be a flower, so not surprisingly; winter gardens have been a longstanding element of Kenrokuen Garden, Kanazawa, Ishikawa, Japan. One of the three most famous gardens in Japan, as well as one of the oldest, Kenrokuen Garden is uniquely recognized by its winter display.

Constructed of lengthy bamboo poles arranged in a conical formation with ropes attached to tree limbs, the yukitsuri method of protecting vulnerable trees and shrubs from heavy snowfalls is an interesting aspect of the garden only witnessed in the cold season.  Rising in the horizon like oversized tipis, these elaborate support systems add to the aura of this age-old landscape and make it a winter garden like no other.

View of the church and the castle in the Gruyere village on a sunny winter day, Switzerland; image credit: George Koultouridis / shutterstock

With its backdrop of the majestic, snow-capped Alps, Switzerland has an advantage when it comes to winterscapes. Against the untameable ruggedness of the mountain range, Gruyères Castle stands with its conical, enchanting roofs reminiscent of childhood fairy tales. Surrounded by walls, the inner courtyard garden is the picture of geometric elegance blossoming with color during the summer season. But incredibly, the order of the garden is truly  outstanding when covered with snow. It is during this time that fairy tales become reality as the crisp whiteness of the snow creates a sharp contrast with the bold lines of the manicured shrubs. The effect is a stunning pattern, best appreciated with a blanket of snow. Although it is not a large garden by many standards, this unique perspective defines Gruyères Castle as an interesting winter garden destination. It is incredible what snow can do to a landscape. Highlights and shadows are formed and the ethereal essence of a garden comes to life. The barrenness of naked tree branches reaching up to the sky has created a sparkling, luminescent show of contrast that is only appreciated when all else has faded. 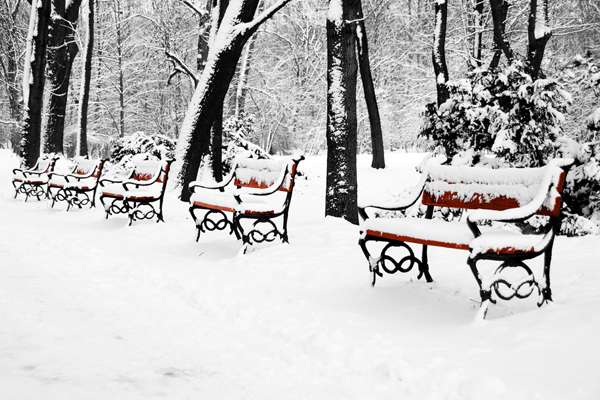 These gardens  not only made the most of the winter season, but glory in its icy grip by enhancing and exhibiting nature’s lesser-known charms. So as tempting as it is to find a warm refuge indoors for the winter, keep your eyes open for the beauty only seen when the snow falls. Article written by guest writer Linda Freymond. Featured image :  Antti Pulkkinen / shutterstock