Maybe you see knitting as an old-fashioned hobby worthy of your grandmother. You would much rather do something cool, something trendy. And anyway, what does knitting have to do with landscape or landscape architecture?

The half-forgotten art of knitting has hit the streets with force. People all over the world are grabbing yarn or wool, crochet hooks and needles, and are learning how to knit. The colorful pieces they create are showing up on trees, lamp posts, monuments, benches, and other elements of everyday cityscape. It is anything but boring or old-fashioned! On the contrary — it is funky, inventive, and very, very fashionable! 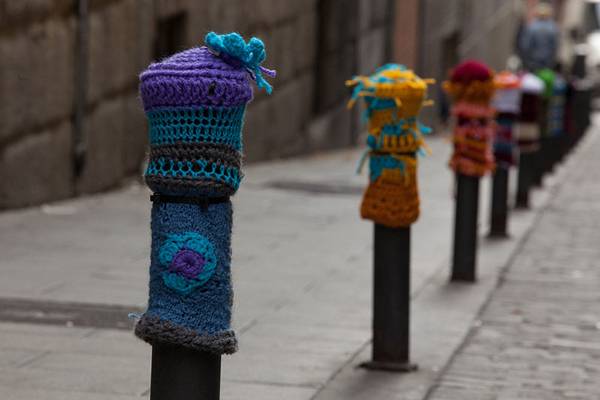 Also called guerrilla or urban knitting, yarn bombing is  a new form of art that has been invading our streets with its brilliant colors, sense of humor, and energy, bringing street art and craft together. Absolutely anything can be adorned in this way: Serious statues might be wearing scarves and socks; benches may be covered with soft woollen blankets; even cars and bicycles cannot avoid being cocooned in a soft, knitted package. 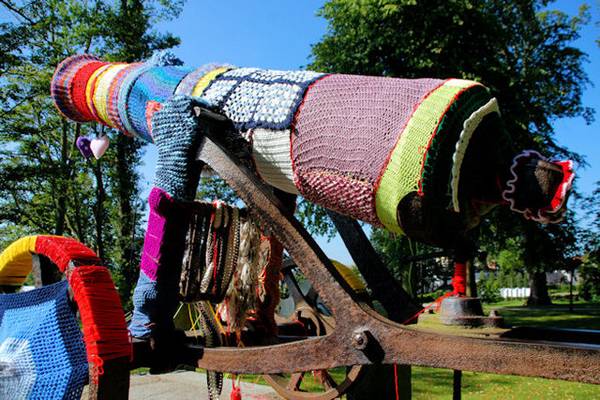 © Copyright Albert Bridge and licensed for reuse under this Creative Commons Licence.

The history of yarn bombing is lost in the mists of time and has been attributed to several different people. All that may be agreed on is that it started in Northern Europe or the United States at the beginning of the 21st century as a form of “inoffensive graffiti”. The movement gradually moved from simple “cozies” to so-called “stitched stories”. The development is mostly attributed to the activity of an English group acting under the name of “Knit the City”. The group, founded in 2009 in London, is famous for its signature sense of humor. It managed to make the art of yarnstorming fashionable worldwide. In fact, it has become so popular that an annual event, The International Yarnbombing Day, was founded on  June 11, 2011. 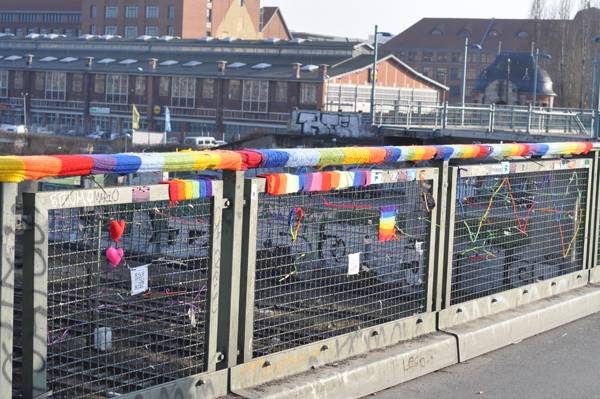 Despite being a relatively new art form, yarn bombing can already boast several iconic projects. One of the most famous is the London phone box cozy by Knit the City. In Copenhagen, the citizens could admire a transformed tank — yarn bombed pink by a large group of people in a protest against the war in Iraq. The famous Wall Street bull got a new pink and purple coat crocheted by an artist called Olek. Responsibility helps all

Even such a joyful activity as yarn bombing might not be regarded all that well by some people. In certain areas yarn graffiti is still illegal and the artists may face punishment for littering or even vandalism. It must be admitted that decomposing yarn might be a bit of an issue in the public space. To keep the whole movement in the society’s good books, everyone engaging in yarnbombing should take responsibility for their art — be considerate while choosing the place for their installation and come back and remove it once it gets dirty and ugly.

Below: Olek and the Yarn Bombed Bull The installations can be any form, any size — from Yarn Bombed Potholes (Juliana Santacruz Herrera’s Parisian project) to 99 tree cozies in Austin, Texas, called “Knitted Wonderland,” by Magda Sayeg. The only rule is to make the space more cozy, colorful and personal. 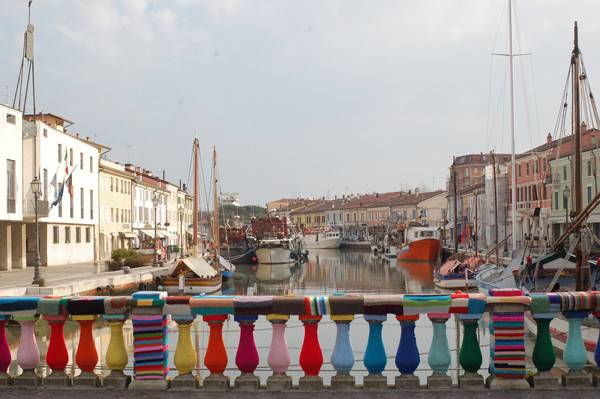 Can I Do That?

Of course! Have a look at the wonderful pictures in this article and at those available online, get inspired, but do not be afraid to try your own ideas. It is very simple — you only need a pair of needles or a crochet hook, some yarn, and some imagination. You can start very small – even a colorful bicycle stand or a scarf on a statue’s neck may brighten someone’s day. Urban knitting is truly for everyone — and everyone can contribute to making their city a happier, friendlier, and fluffier place!