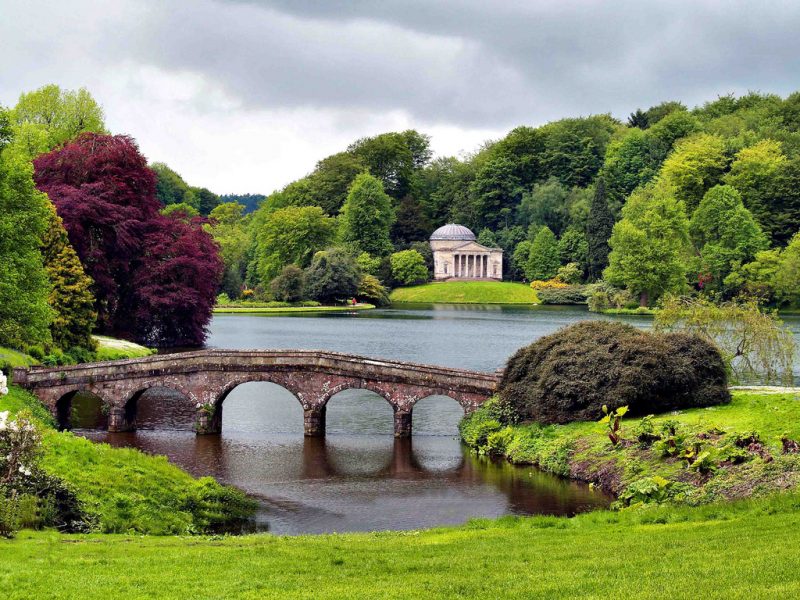 A Brief and Visual Guide to Historical Landscape Architecture. Although Scot Gilbert Laing Meason first used the term landscape architecture in 1828, humans have of course shaped the landscape around them since the inception of civilization. Over the centuries, mankind’s interaction with the land and the designing of it has led to the creation of a plethora of societies, cultures, and landscape technologies. Of the countless historical landscapes that dot the world today, I have chosen 15 to discuss — some well known and, hopefully, some that will be new to you. 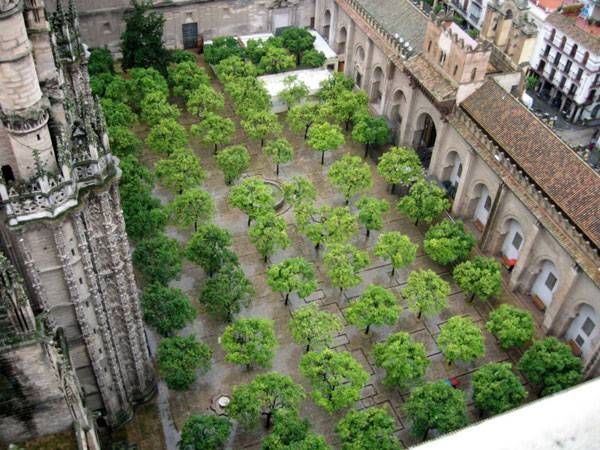 The Patio of the Oranges at the Seville Cathedral, seen from the Giralda bell tower, Sevilla, Spain. Credit: John Picken, CC 2.0

Located within the Mosque of Córdoba (or Mezquita de Córdoba, as it is known in Spanish), southern Spain, the Patio de los Naranjos is thought to be one of the oldest gardens in Europe. It was established at the time of the Great Mosque’s initial construction in 784. Originally containing plants such as pomegranate, cypress, and palm trees, the garden today is comprised of a simple grid of orange trees — 98 to be exact — planted in rows dating back at least to the end of the 18th century. The Patio de los Naranjos stands out due to the designers’ sapient response to the limits imposed by the garden’s environment, transforming the necessity of irrigation into artwork, and coalescing nature and religion. 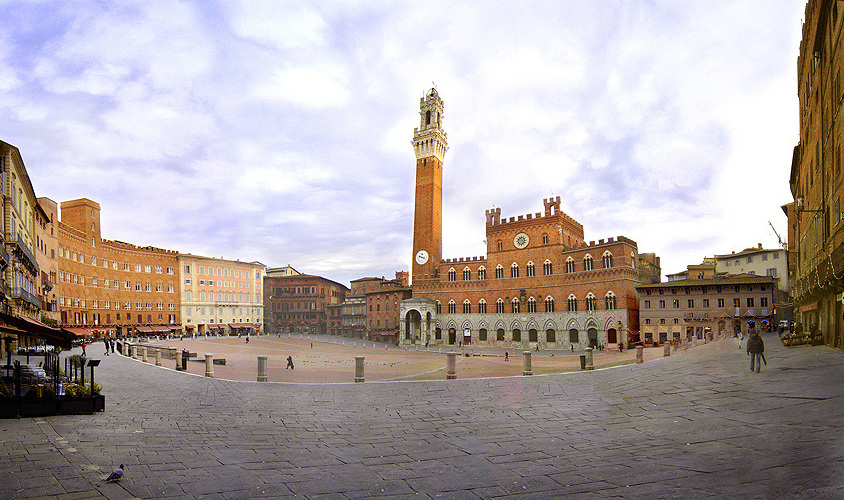 Siena, Italy’s 700-year-old plaza is one of Europe’s great public spaces. Originally the site of a Roman forum, the square has acted as the cultural heart of the city since the construction of the town hall in the 12th century. “Il Campo”, as the Sienese call it, functions superbly as a civic and social space because of its active edges and affordability toward social gatherings and interaction. Renowned Danish architect and urban designer Jan Gehl lauds The Piazza del Campo as a champion of the human scale, describing it as a “one hundred percent place”. 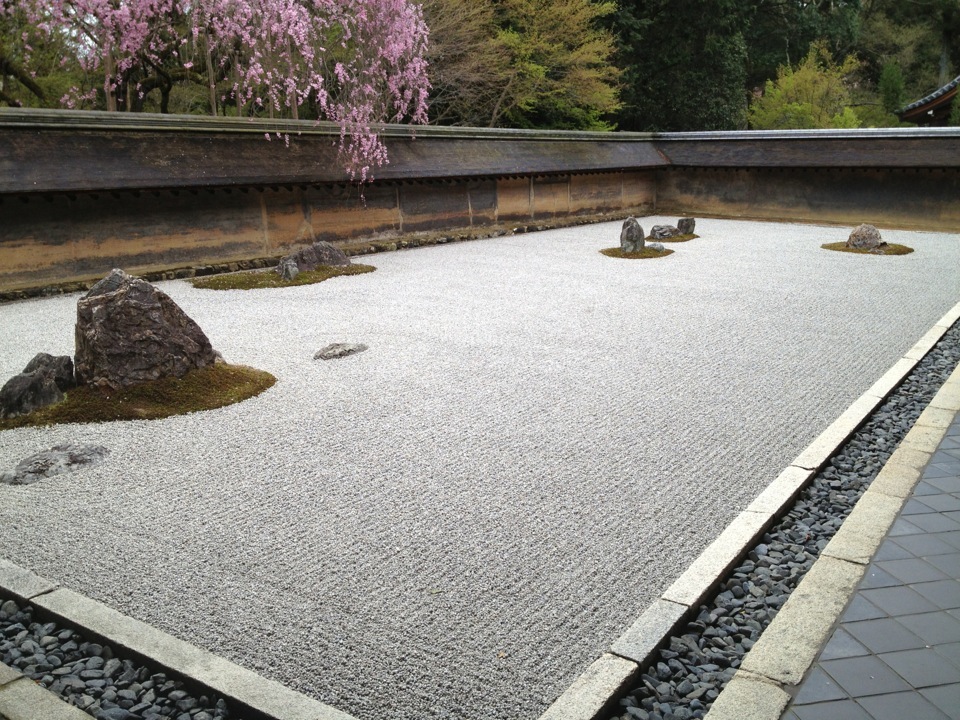 The rock garden at Ryōan-ji Temple in Kyoto, Japan, is considered one of the finest surviving examples of kare-sansui, or dry landscape garden. It is not known exactly who designed the Ryōan-ji Garden, nor exactly when. Speculations regarding this date range between the late 15th and 17th centuries. The garden itself is gracefully simple: An encircling wall of earth and clay frames 15 rocks arranged in a rectangle of raked white gravel. Constructed as a visual form for users to attain meditative states of consciousness, this garden also acts as a familiar reference symbol for Eastern mysticism. 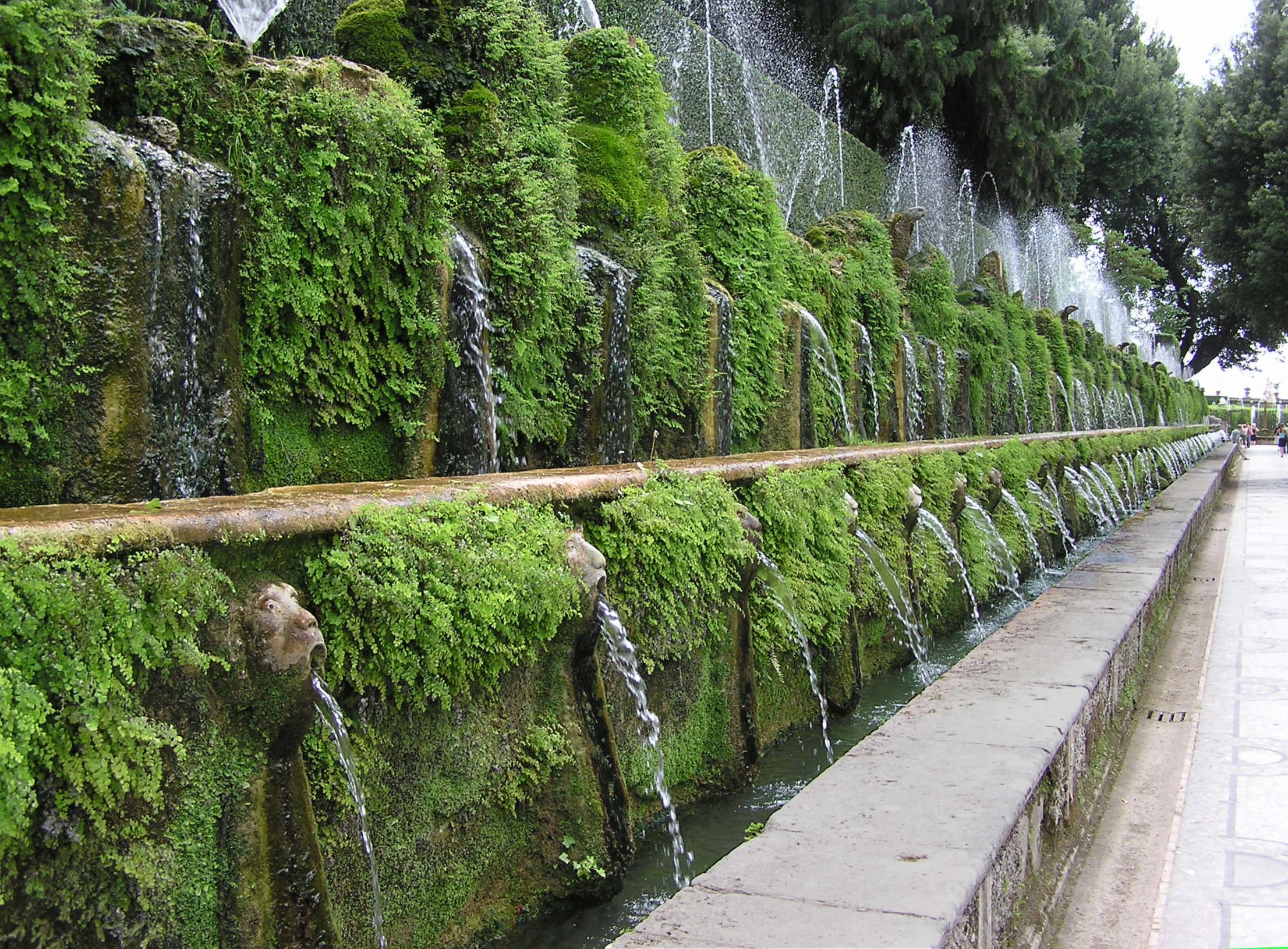 The One Hundred Fountain (Le Centro Fontane) at the Villa d’Este, Tivoli, Italy (near Rome). Photographed by Adrian Pingstone in June 2007 and placed in the public domain.

Akin to many of the world’s other superlative gardens, Villa d’Este in Tivoli, Italy, is the product of an eager owner with a willingness to spend gargantuan sums of money. The garden was designed between 1550 and 1572 by Pirro Ligorio and is famed for apotheosizing the use of water through the inventiveness of 16th-century hydraulic engineers, who utilized gravity and hydraulics to choreograph water through the garden. Together, the palace and gardens at Villa d’Este are considered to symbolize Renaissance culture at its most refined. 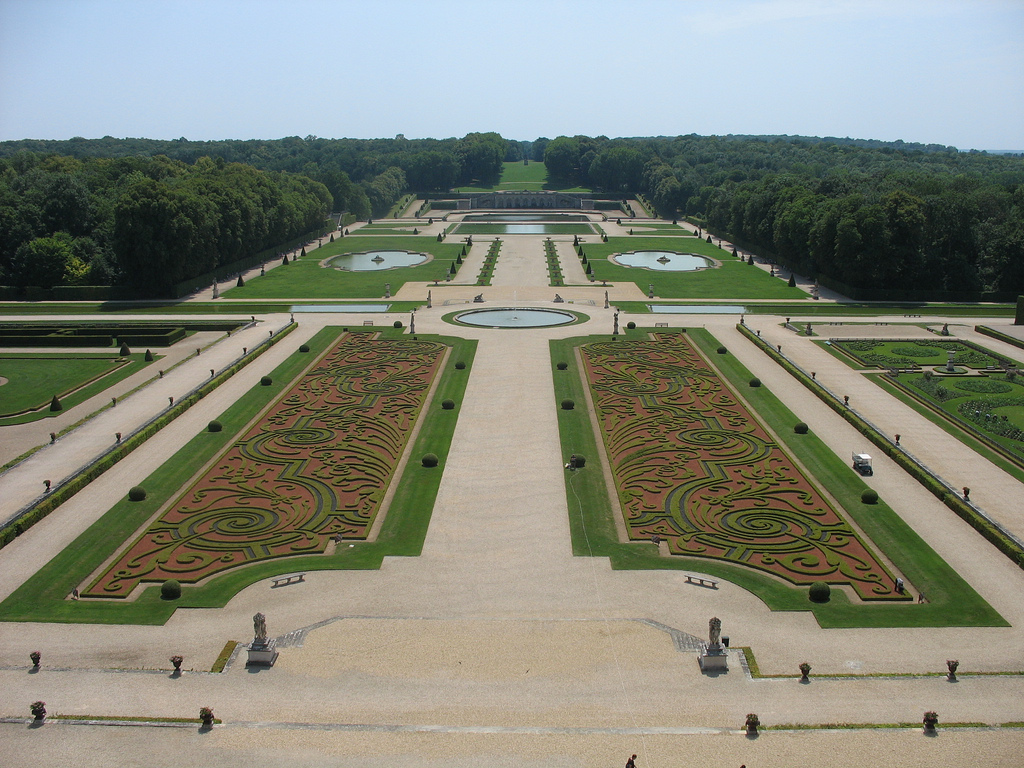 The design for Vaux le Vicomte is today considered the most admired of the French Baroque landscapes and is the first great work of André Le Nôtre. The garden spans more than 1,000 acres and encapsulates the essence of a Baroque-era landscape in the French formal style. French garden design in the 17th century asserted the idea of man controlling and manipulating nature, and together with the enormous price tags that ensued, they imparted an important message of monarchical power and taste. 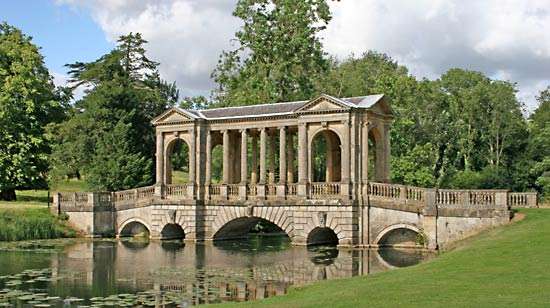 The gardens of Stowe House in Buckinghamshire, England, are some of the most celebrated in the country — worthy of such because within its lifetime, the garden has witnessed all three periods of the English style of landscape gardening: the formal phase by Charles Bridgeman; the phase of classical allusion characterized by William Kent and James Gibbs; and the final naturalistic phase established by Lancelot “Capability” Brown. The grandiose layout of Stowe directly reflects the shifting currents of garden design in the 18th century. Kent’s work at Stowe and his invention of the ha-ha, or sunken fence/ditch, put an end to the bisection between formal garden and surrounding landscape, resulting in him becoming one of the most influential figures of the Romantic generation and adopting the notion that all nature was a garden. 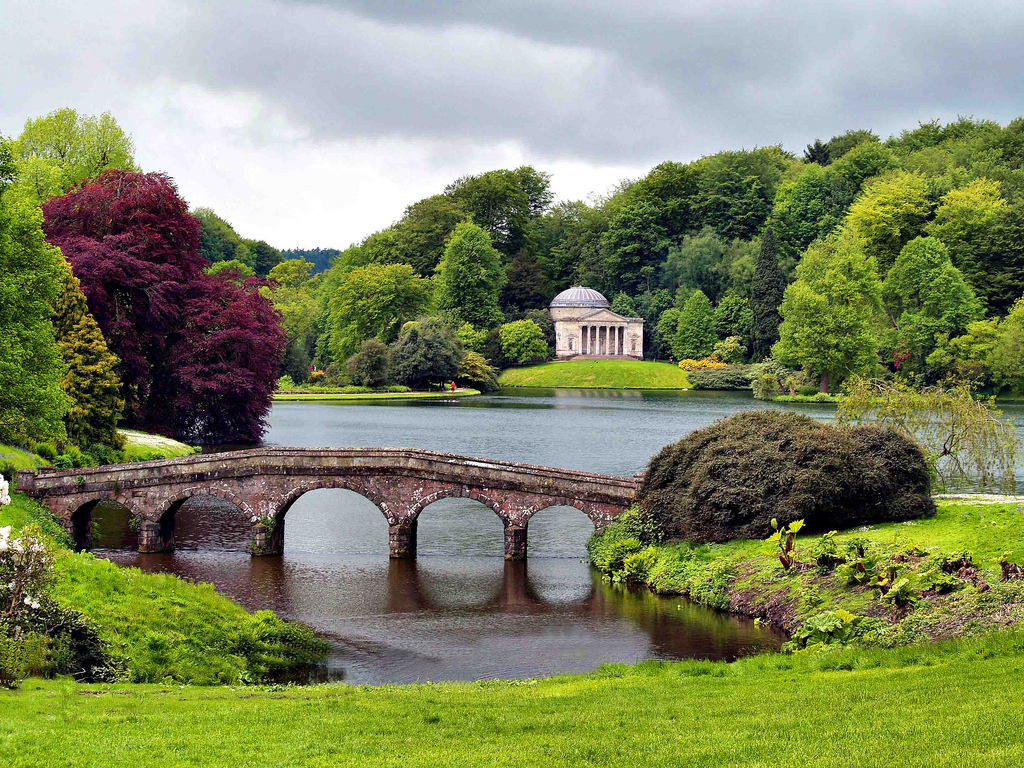 Another exquisite example of the English landscape style, Stourhead gardens in Wiltshire, England, possess a picturesque itinerary rich in allusion and meaning. The circumambulatory nature of the garden can be interpreted through a series of stations, whose unifying theme is that of the voyage of Aeneas from Troy leading to the founding of Rome. It is thought that the whole ensemble was to a degree a monument to the dead, as Henry Hoare II, Stourhead’s owner, witnessed the death of many family members over the years. It was in 1743, however, when Hoare became a widower, that he and architect Henry Flitcroft (a protégé of William Kent) embarked upon the major garden enterprise that is today one of the consummate works of art achieved by Western culture. 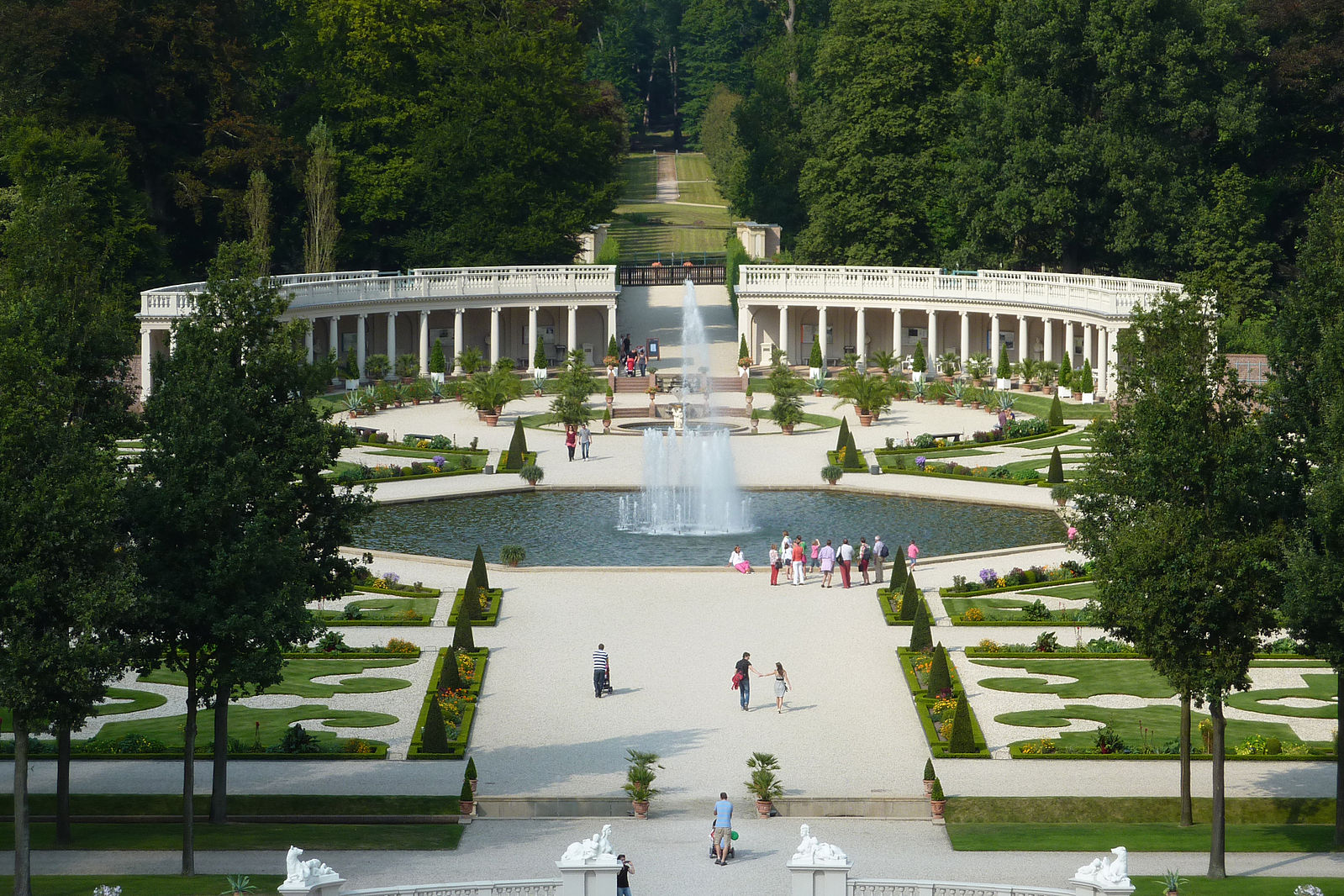 The Baroque palace and gardens of Het Loo are located in the Veluwe region of the Netherlands. Much like the Palace of Versailles, Het Loo had its origin as a hunting lodge, dating back to the late 17th century, and is often referred to as the Versailles of Holland. The designers, Jacob Roman and Daniel Marot, completed Het Loo in 1716, appropriating much of the 17th century French landscape style, but lessening both grandiosity and scale to suit the site’s topography, as well as social expectations in the country at the time. Sadly, the gardens were subjected to 300 years of decline. Thankfully, due to the palace being deemed of great national significance, the site was fully restored, opening as a national museum in 1984.

The United States’ first landscaped public park — Central Park — was designed by the pre-eminent landscape architects Frederick Law Olmsted and Calvert Vaux. Together, their simple social and artistic vision was to provide the exploding number of urban dwellers in New York City with a place of rural respite. Given that this landscape was to not only be the first landscaped public park in America, but to also establish New York internationally as an urban center and to rival Paris’ Bois de Boulogne or London’s Hyde Park, Central Park was one of the great political and cultural achievements of the American people. 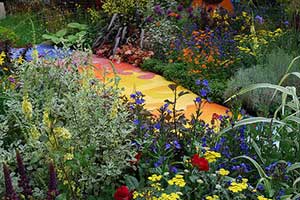 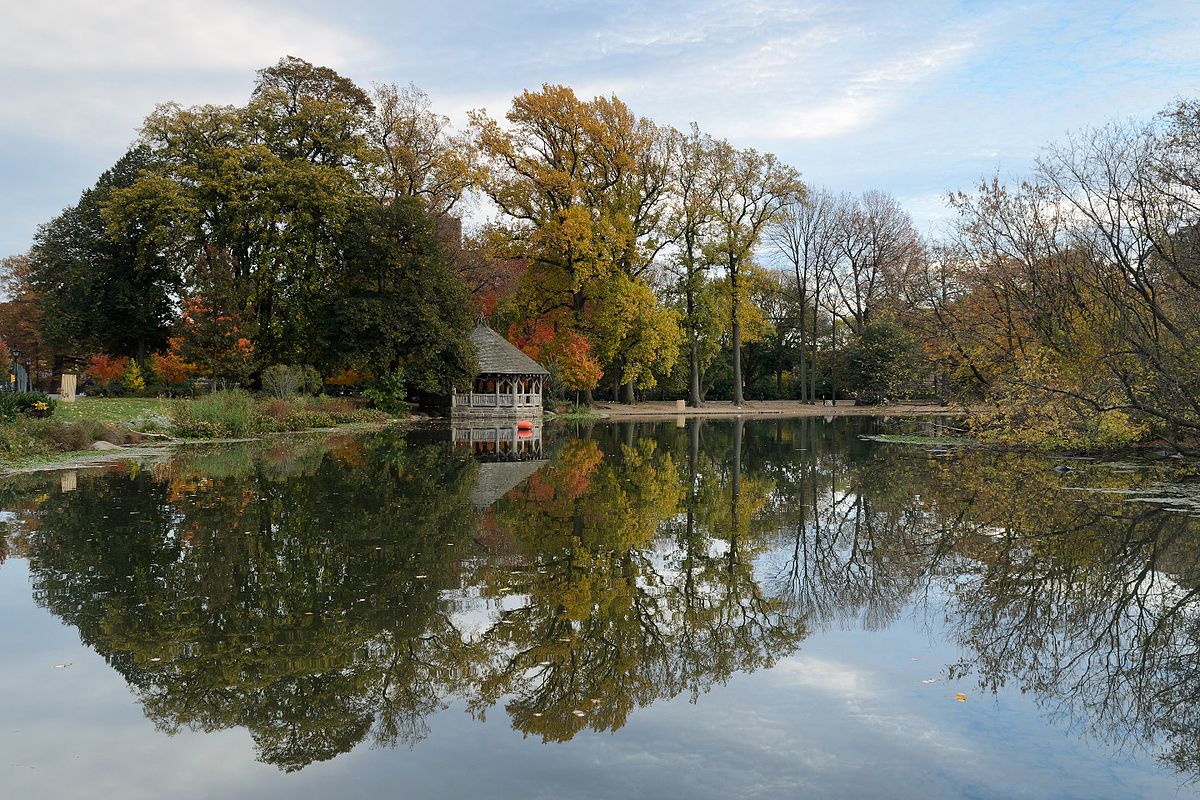 As any landscape enthusiast would attest, the names Olmstead and Vaux are synonymous with New York City’s most famous park, Central Park. However, Brooklyn’s Prospect Park, designed between 1864 and 1866, is often considered the most perfectly realized landscape of the two stalwart designers. Much like Central Park, the 585-acre green emerald is comprised of three typologies: undulating meadow, placid lakes, and bucolic woodlands. It is claimed the duo themselves considered Prospect Park to be their masterpiece. What do you think? 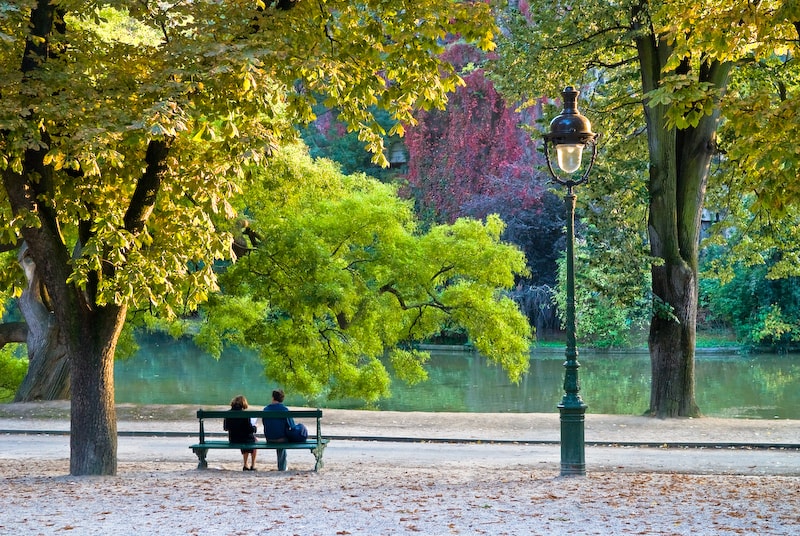 Engineer Jean-Charles Adolphe Alphund designed Parc des Buttes-Chaumont under Napoléon III’s urban design program that wrought panoplies of change in the appearance of Paris during the Second Empire. Opened in 1867 in alignment with the Exposition Universelle, the former refuse dump and quarry site showcases advancements in landscape technologies and industrial materials available at the time. This included steam-powered machines performing earthwork duties, and the functional application of concrete — a material integral to the construction of the park.

Antonio Gaudi designed Barcelona’s Parc Güell between 1900 and 1914 for Catalan industrialist Eusebi Güell, who envisaged a stylish park and housing development for Barcelona’s aristocracy based on the English garden city model. Only two of a planned 60 housing units were ever completed, but Gaudi’s artistry still imbued the landscape with evocations of the fantastic and supernatural. The failed venture was acquired by the city of Barcelona and turned into a public park in 1922. Today, it is extolled as an artistic masterpiece. 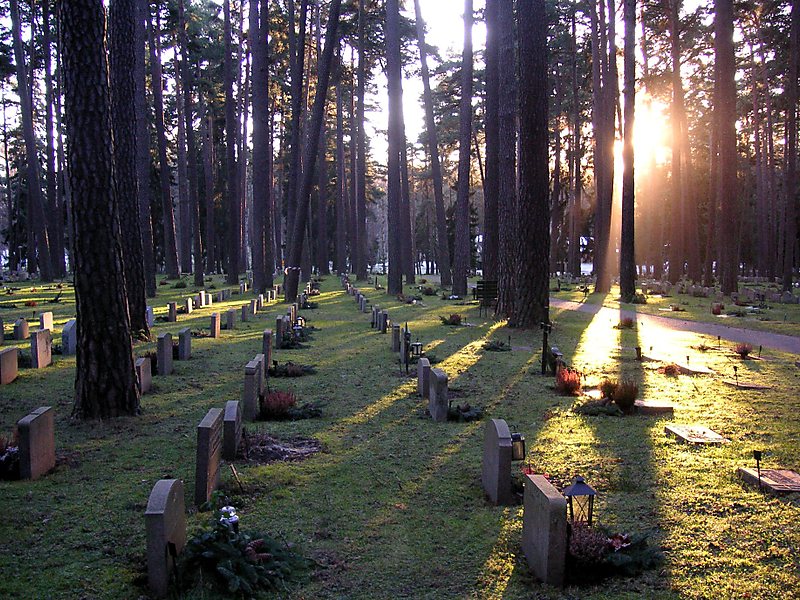 Designed between 1915 and 1940 by architects Gunnar Asplund and Sigurd Lewerentz (who also trained as a landscape architect), Stockholm’s Woodland Cemetery occupies just less than 250 acres, most of which is heavily planted pine forest. The beauty of the former quarry site lies in its natural forest setting and its design in conscience with annual cycles and the passage of seasons. In 1994, the Woodland Cemetery became one of the few works of 20th century architecture to be placed on UNESCO’s World Heritage List. It was somewhat of a bitter irony that in 1940, when Asplund passed away, he became the first person to be buried in the cemetery. 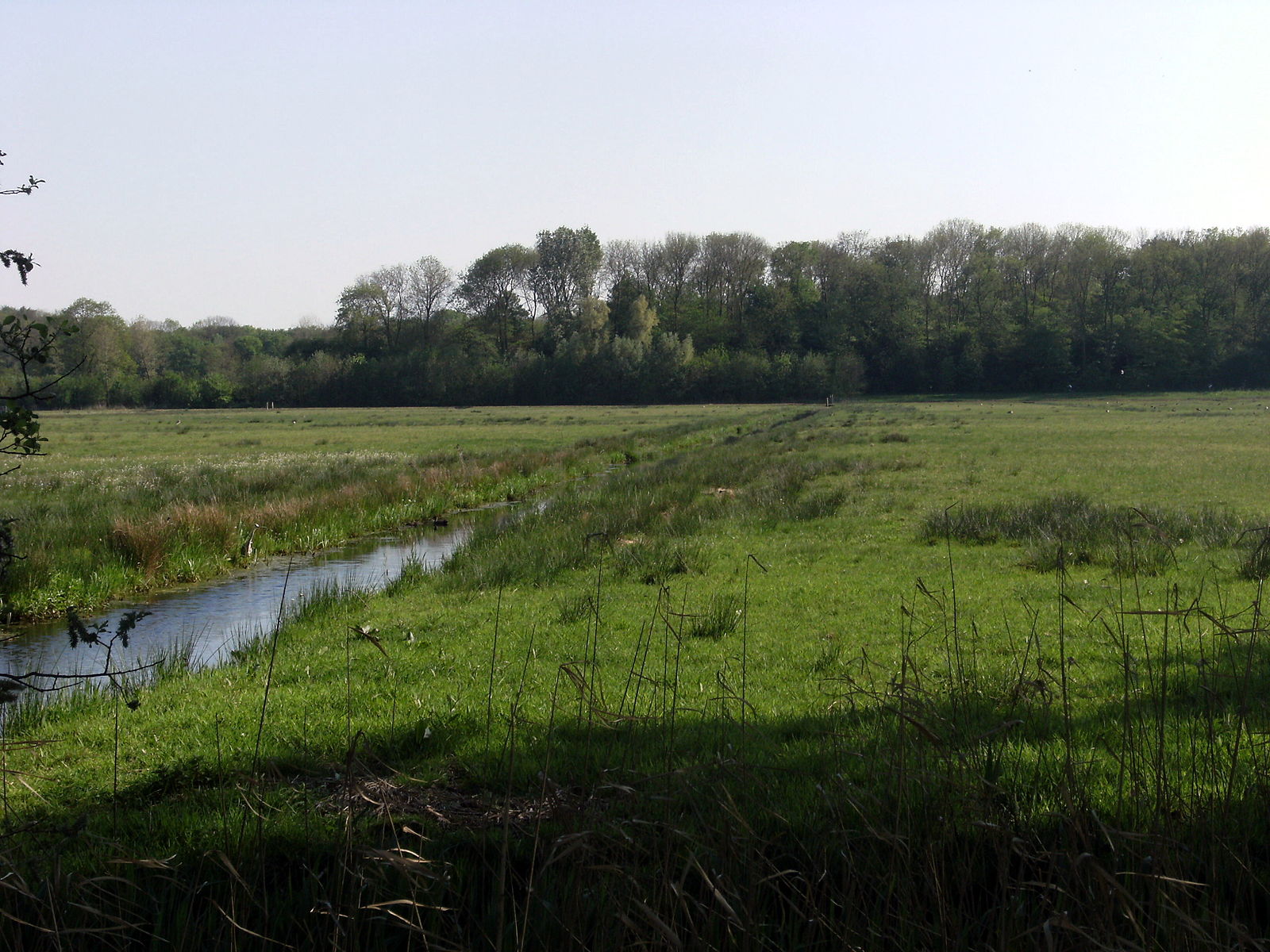 This 2,000-acre forest-park was built in Amsterdam between 1929 and the 1950s. The designers responsible were architect Cornelius Van Eesteren and landscape architect Jacopa Mulder. Together, they took a stand against pictorialism in developing the plan and synthesised athletic facilities and native forest — two landscape typologies that had never been paired before. Foreign in appearance to that of its predecessors, for some time critics failed to align the park with any established stylistic categories. Bos Park represented a bold move away from an aestheticized composition to that of process and production as catalyst. This conceptual shift broke with the traditional public park ideology at the time and connected the landscape to the industrialized city surrounding it.

The Miller Garden is located in Columbus, Indiana, and was designed by American modernist landscape architect Dan Urban Kiley between 1953 and 1957. The parts that form the whole of Kiley’s Miller Garden are considered classical — bosques, hedges, allées, orchards, and lawn — but the garden’s spatial configuration is in fact modern in every sense. Kiley’s plan for the gridded layout of the garden expands out as an extension of the geometric and orthogonal residence, dividing the garden into four sections that Kiley envisioned as “pin wheeling spaces” with each corresponding section possessing its own distinctiveness. The 13-acre property is considered one of the United States’ finest mid-century modernist residences and, in the year 2000, was named as a National Historic Landmark, one of six in Columbus.

Naturally, 15 examples barely scratch the surface of the wonderful history of landscape design, but in my eyes the aforementioned exemplars do our profession a great justice. What landscapes would you as a reader have included?