Wow. Another great day at Labash 2010! I want to give a BIG HUMONGOUS thank you to the students of UNLV that planned such a successful event. These guys know what hospitality is all about!

Just a side, you have to check out downtown if you ever visit Vegas. It has the old-school charm of the historic Las Vegas set under a light dome, known as the “Fremont Street Experience.” Here is a video I found on YouTube:

Back to the crawl… The students set out on a “social networking” expedition where they went to several establishments on Fremont Street sampling the local food and beverages – in moderation of course. Just think, Irish Car Bombs, Mechanical Bulls, and 150 students parading from bar to bar.

Today’s expo ended well. Our booth was full of students lounging on our sofa and orange arm chairs. We raffled off iTunes gift cards around 1 o’clock before the students attended the last lectures of the day. 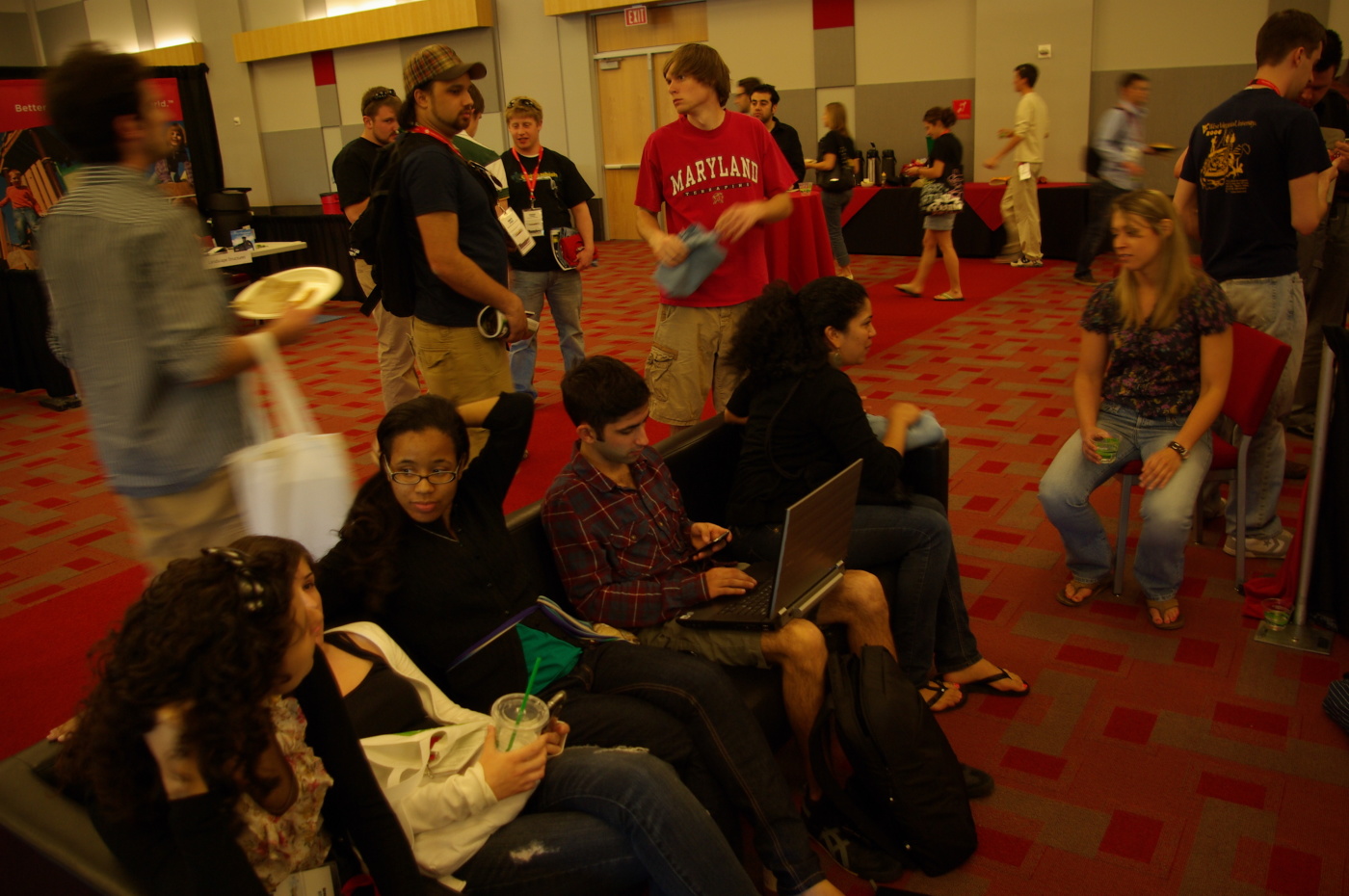 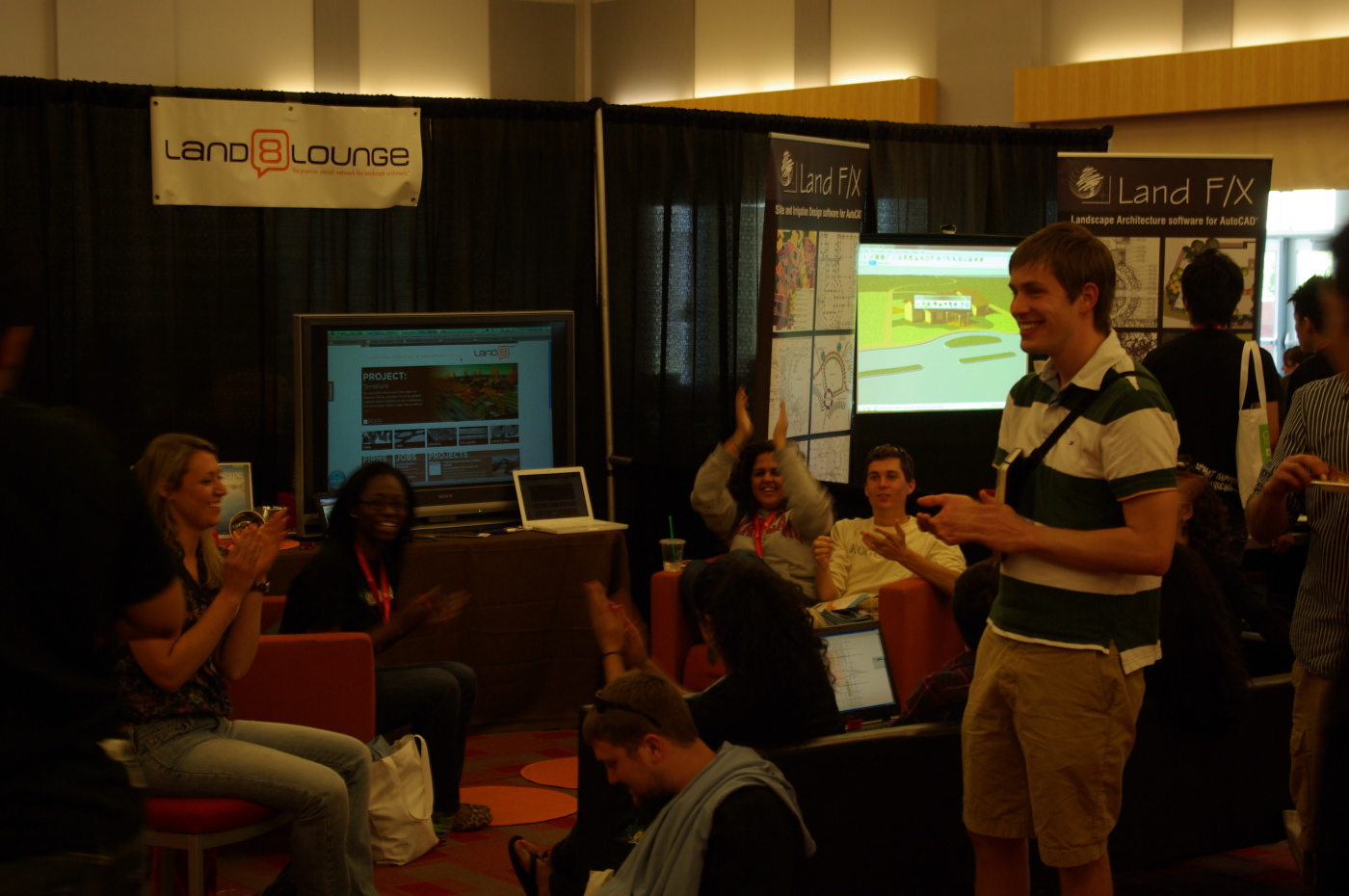 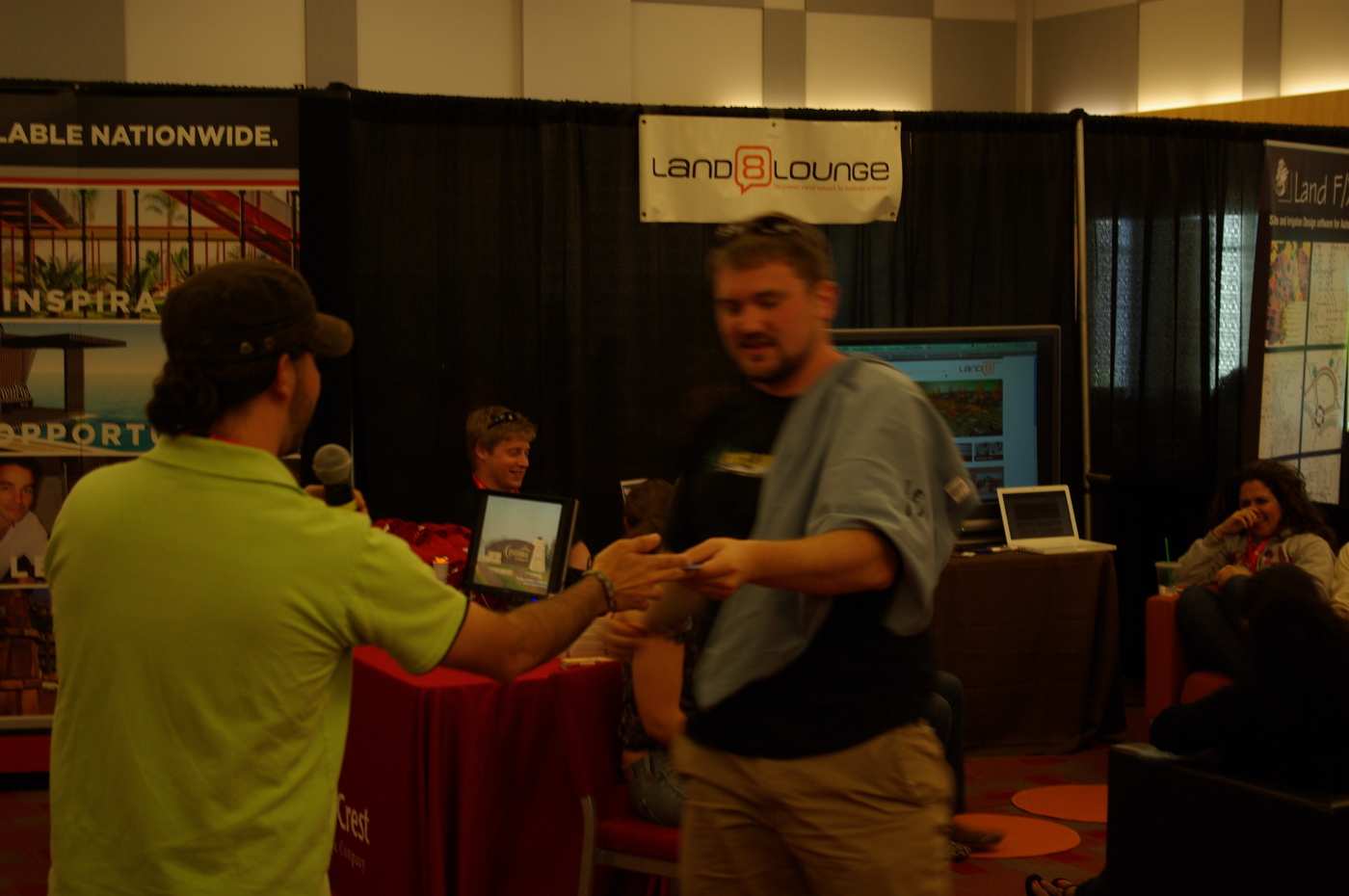 Our new friends over at Permaloc had the great idea of passing out fake poker chips and gave cash prizes for the schools that turned in the most at the end of the event. I believe Ball State came away with the grand prize – $250 of cold, hard cash. Not bad, eh?!

Here are some photos we snapped as we closed down the expo. The first is with our buddy, Dean Hill, from GreenScreen. The second is with our friends over at Landscape Forms. (Just an FYI, those green lounge chairs are extremely comfortable and were donated to the school after the expo.) 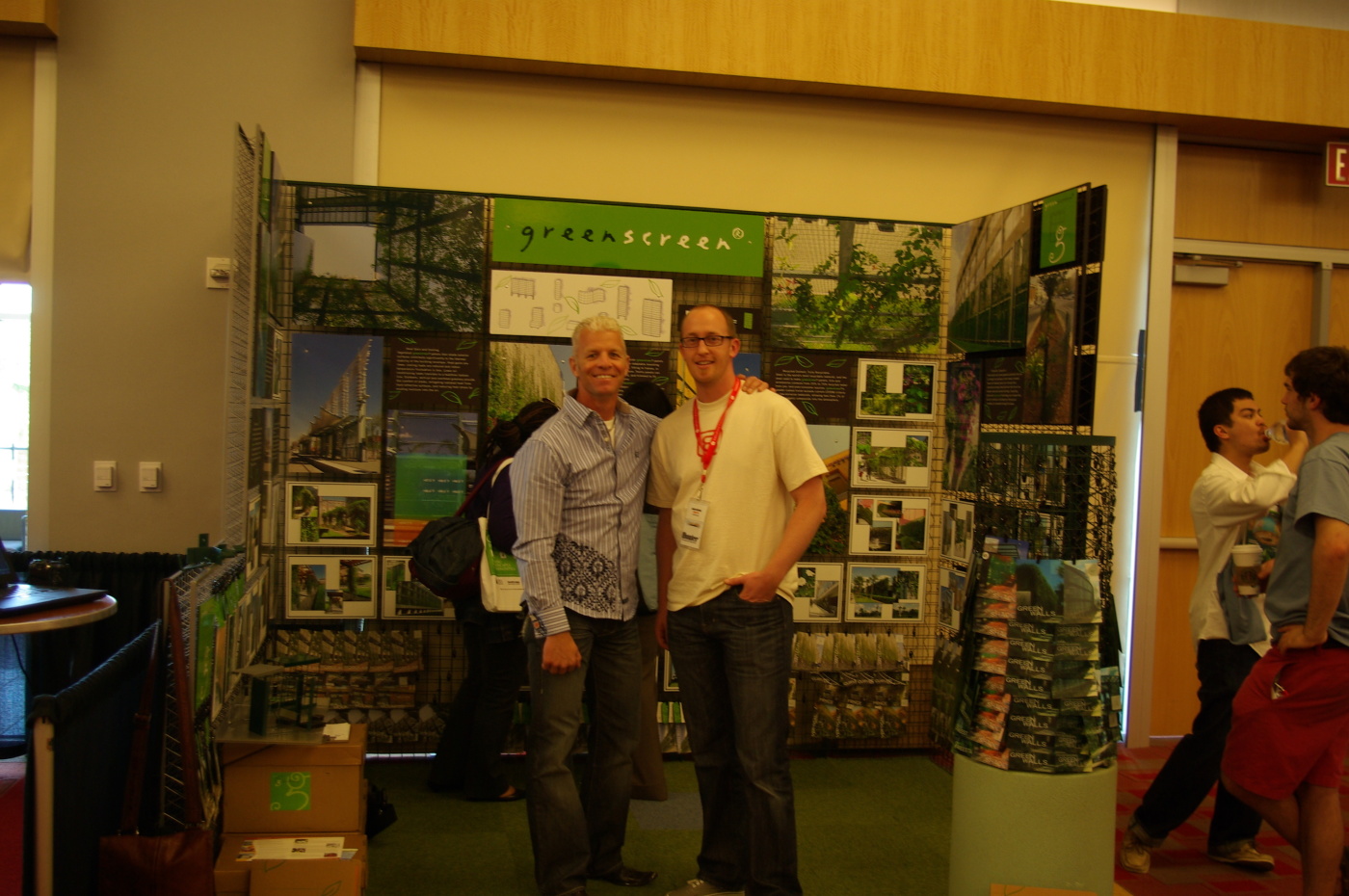 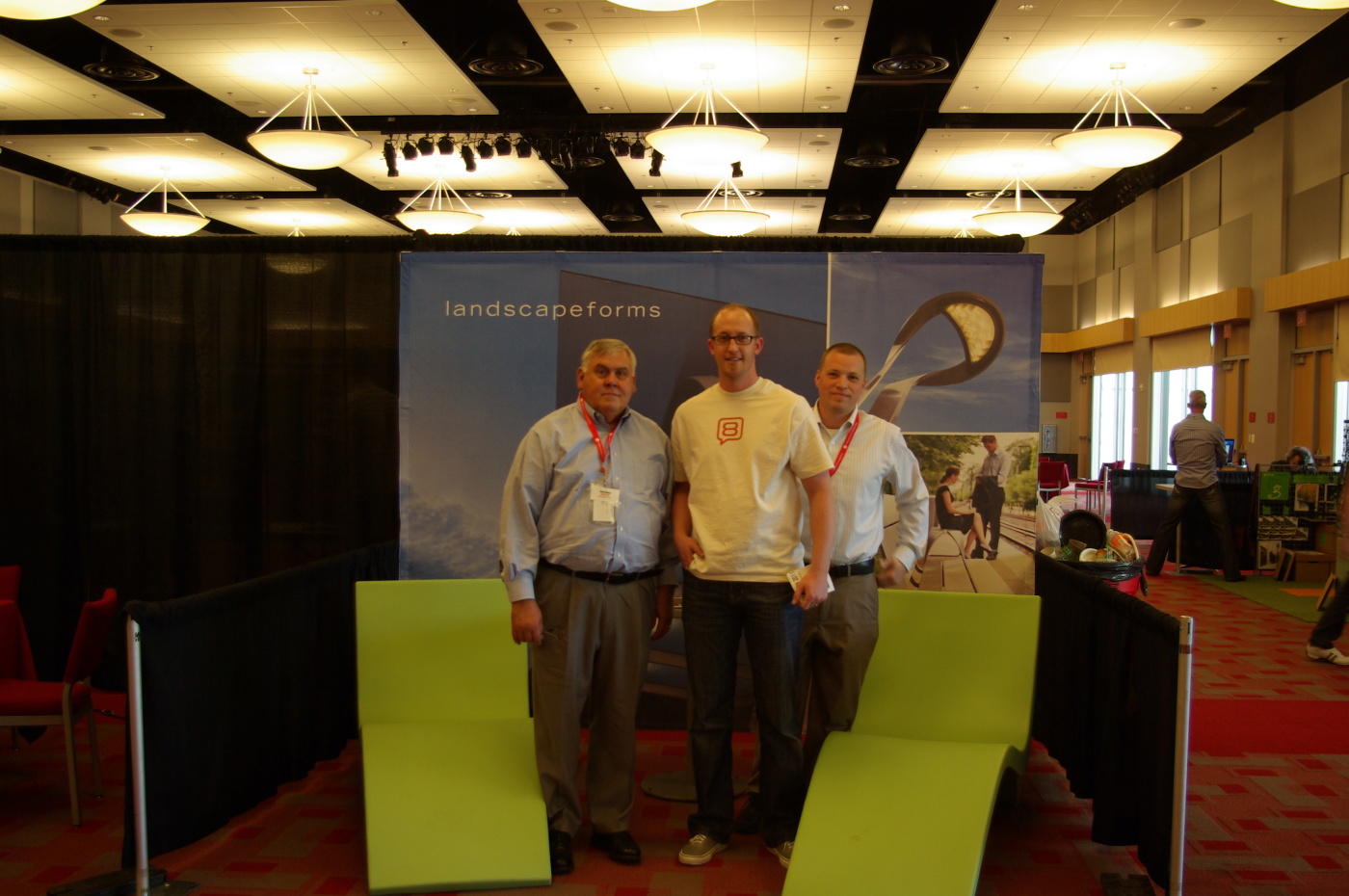 After resting up back at the hotel, we all took double-decker buses to the closing ceremonies at the World Market Center to finish out the festivities with a slight downer. The key note speaker, Dale Chihuly, was a no-show. He was supposedly too sick to make his flight, but I don’t buy it. Everyone’s reaction when the announcement was made let me know I wasn’t the only one disappointed. We ended up watching a video presentation of Dale Chihuly’s work presented by documentary film maker and friend of Chihuly, Mark McDonnell. I have to say the work was brilliant, my favorites being his Jerusalem installations. But it would have been much more impressive if it were given in the 1st person. You know?

After the presentation, everyone woke up by voting (by noise) on the two video entries from Miami and Montreal for the 2012 bids. And the winner goes to… MIAMI! See you there in 2012…

Overall, Labash 2010 was a smashing success thanks again to Samantha, Fidel, Landon, and the other UNLV students that helped organize the event. We can’t wait for Labash 2011 at Purdue. Be sure to join the group to keep up-to-date until they get their site up and running. Also, please start saving up now for next year. From what I have already heard, it is going to be awesome!

Did you attend Labash 2010? If so, join the Labash 2010 group and share your stories, photos, and videos from the event.