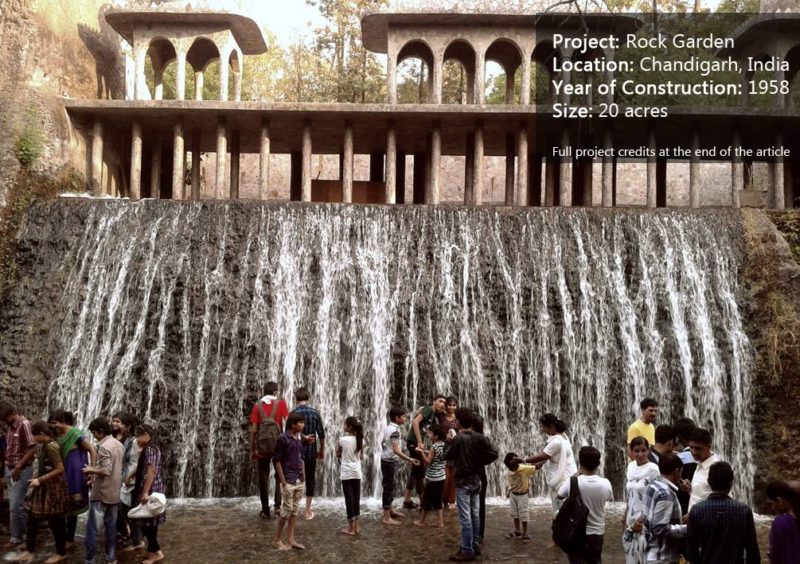 Article by Bhanu Mahajan – A review of the Rock Garden, by Nek Chand, Chandigarh, India, shows us how to  convert waste into art and landscape. Parks and green belts are the lungs of a city. They help to minimize the environmental stress caused by automobiles and industries, and also act as recreational spaces. But with the increasing demand for land in urban centers, it is hard to find such spaces, particularly in developing countries with densely populated urban settings. With the generation of huge amounts of unrecycled municipal waste going into suburban landfills, many cities start to become unlivable. Lots of untreated piles of waste and no green spaces for recreation are something that we often see in our cities.  But can you imagine a sculpture garden inside the woods, designed as an amalgamation of art, nature, and landscape — and made completely out of waste. 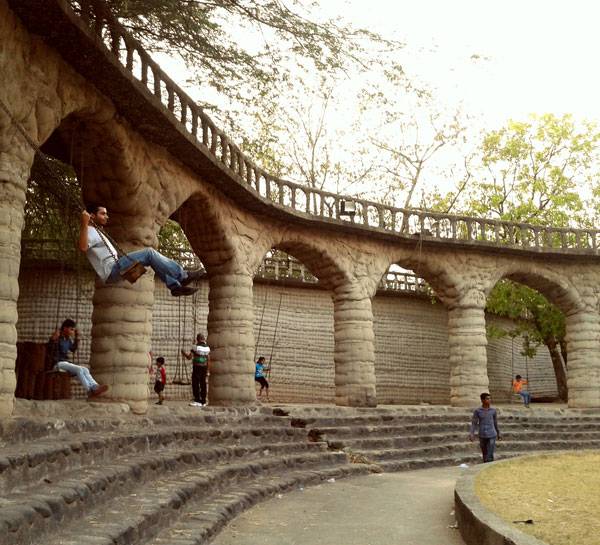 Convert Waste into Art and Landscape

The Rock garden is one such unique space, which has a water channel, rocks, woods, an open-air exhibition hall, a theater, and a labyrinth, all interwoven into a delightful maze that all of us would like to experience at least once in our lifetime. And the best part? It is made of household waste, creating a Hollywood-style fantasy world of sculptures in the form of temples, palaces, kings and queens, animals, birds, and human figures. Situated in the foothills of the Shivalik mountain range and located between the Sukhna lake and the famous Capitol Complex, which is a UNESCO world heritage site designed by Le Corbusier himself, it is one of the most visited tourist spots in Chandigarh. Spread over 20 acres of forest inside the city limits, its popularity has even dwarfed that of the magnificent structures designed by the master architect. 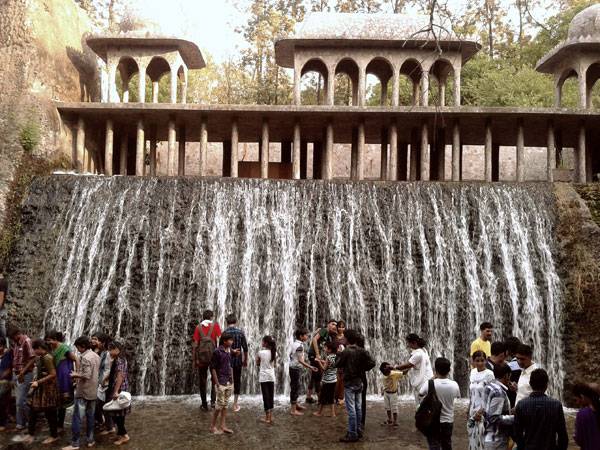 History of the Rock Garden

The Rock garden was created by Nek Chand, who was a government employee and an unusual artist who gained so much global appreciation after the creation of the garden that his sculptures are now exhibited in museums such as the American Museum of Folk Art in New York, the Capitol Children’s Museum in Washington, D.C., and in many others in Europe (The Hindu). Chand constructed the Rock gradually, over a period of 18 years, beginning in 1958. During that time, Chandigarh was being planned as a modern city under the vision of Le Corbusier. 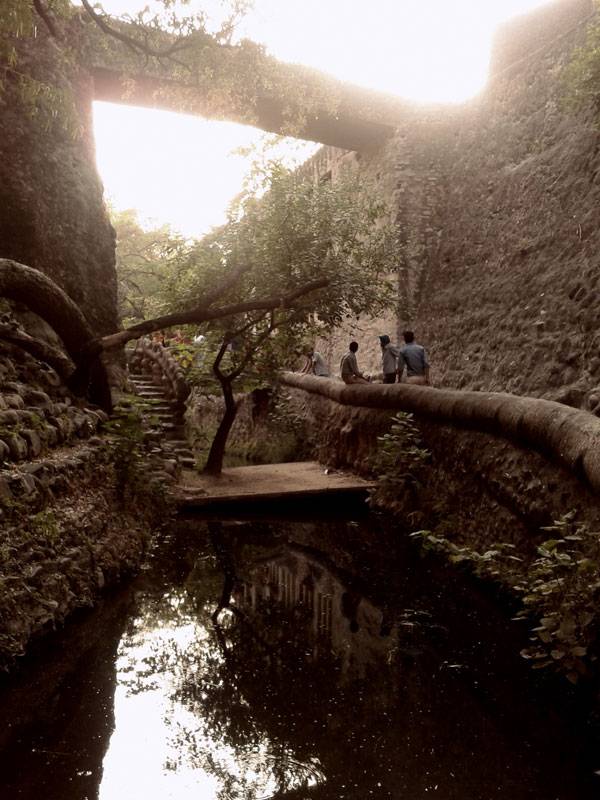 Chand, a road inspector, roamed the city and found this stretch of virgin forest, where he secretly started making sculptures in various forms, using rocks, waste bottles and containers, bangles, garbage bins, tubes and tires, broken tiles, utensils, and all other sorts of urban and industrial waste. For seven to eight years, he collected waste from nearby villages and dumping grounds on his bicycle, and after 18 years, he had built 20,000 rock forms and sculptures. 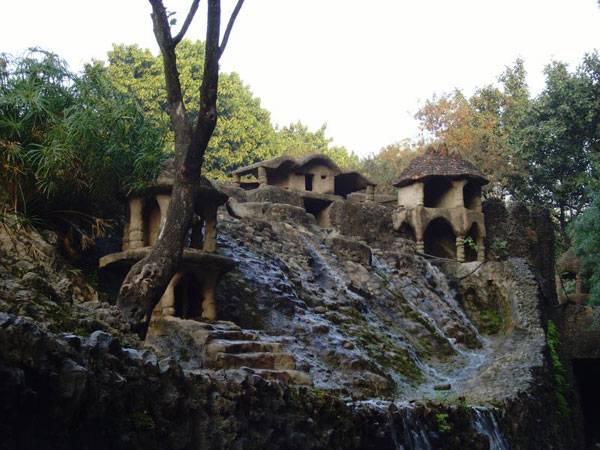 In 1975, the garden was accidently discovered by a senior official, who threatened to sue Chand for doing illegal construction in the forest and to destroy all the sculptures. But after the Rock garden received praise from various artists, it was thrown open for public viewing in 1976. Since then, the number of visitors has only increased. Today, it is preserved in its original form without any interference from the strict planning and architectural by-laws of Chandigarh. 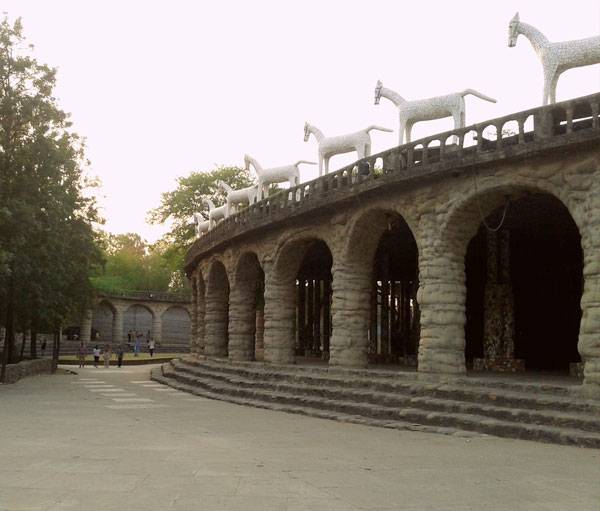 The layout of the garden is based on the fantasy of a lost kingdom, with 14 different zones such as the king’s palace, his army, and villages. It has a main Durbar (king’s court), which has natural stone forms depicting gods and goddesses, and a swimming pool for the queen. (Chandigarh tourism). The use of bridges; a mix of unpaved, semi-paved, and stone-paved walkways; alleys; and narrow openings defines the movement patterns for the visitors. The main entrance is marked by the presence of large boulders and rock-cut art forms. The open-air theater is separated by an arcade, which surrounds a small children’s play area and an art gallery. 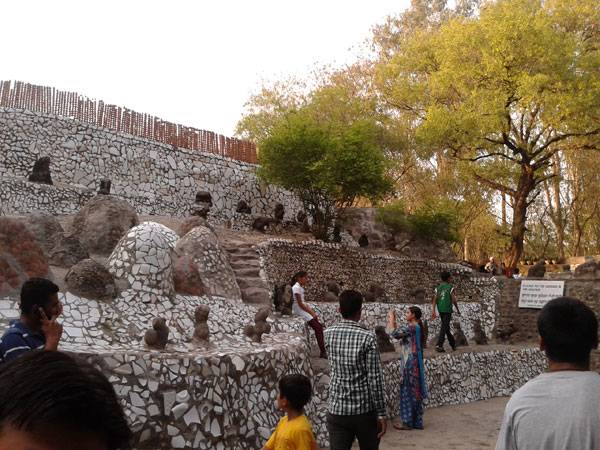 Each and every space is interconnected through hidden walkways, doorways, and arches, and each space is different in size, shape, and layout. Like in a thriller movie, one curiously leaves one space only to a get a view of a surprising new space. The presence of small pools and a large water channel, which runs throughout the galleries, surprises visitors at various spots. The water stream is powered by a waterfall, where some visitors prefer to take a shower in the summer. The Rock garden is a perfect case of utilization of garbage to create a public space for recreation. Since its formal inauguration in 1975, it has attracted immense art and tourism activities, and is famous among environmentalists, as well. 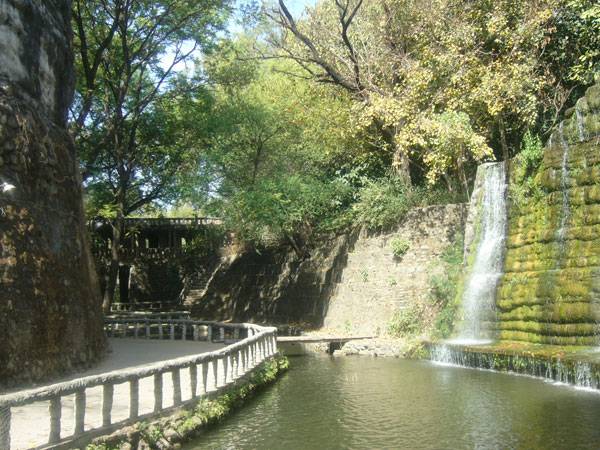 By Shahnoor Habib Munmun – Own work, CC BY 3.0, source

A perfect mix of hard and soft landscape, this project successfully demonstrates how waste can be manifested into art and how creative landscapes can be designed with a minimal environmental footprint. It has become a landmark in the city. A stroll through the Rock garden is a must for nature lovers, art connoisseurs, and everyone else who doesn’t want to miss a mesmerizing landscape. Can you think of other ways waste could be used to create awe-inspiring landscapes? 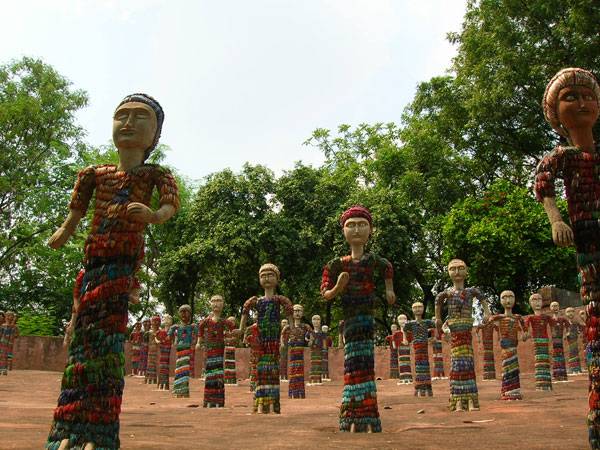