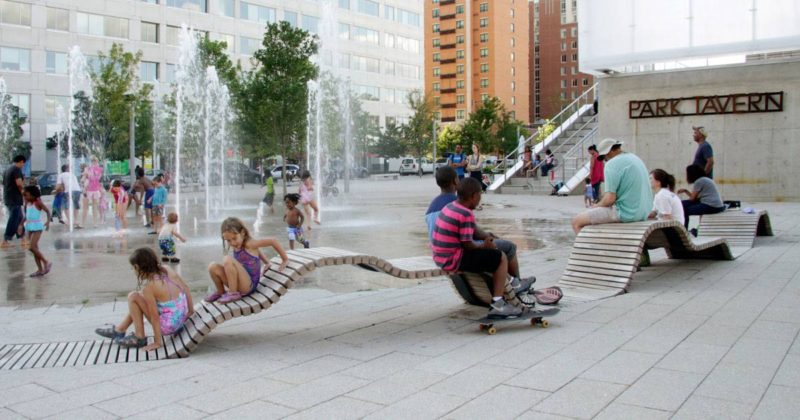 Article by Galo César Gutiérrez Díaz – A review of Canal Park by OLIN, in Washington, District Of Columbia, USA. In a city where the priority is the automobile, will it be a great advance to recover open public spaces? These improve the quality of life of its inhabitants, giving multiple benefits from social to economic. Recovering an open public space is not easy; it takes a lot of social support to make this happen, but by doing so, it causes a long chain of benefits for the sites where it is possible. In the district of Anacostia, Washington D.C., a project shows us one of the best ways to recover three blocks that were intended for the district’s school parking lot. This beautiful landscape design was achieved by the OLIN studio, who were in charge of capturing a beautiful and improved image of the old canal that once crossed the site. 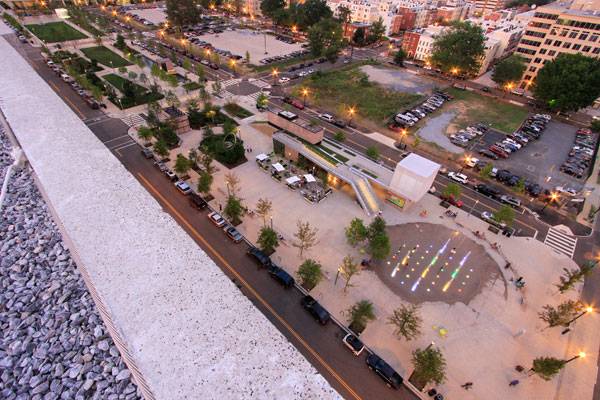 This park, which opened in 2012, is part of an initiative of the District to develop the economy of the site, promoting it with different forms of commerce, and spaces where residents can recreate, triggering additional benefits for the surrounding community. Starting with the pavilion, with its elegant and modern design made by STUDIOS architecture in collaboration with OLIN; it refers to the barges that once sailed through the canal. In the upper part of the pavilion, a green terrace space welcomes us and gives us a magnificent panoramic view of the park. 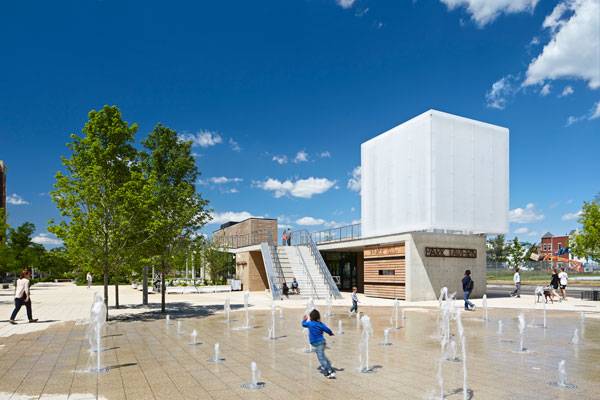 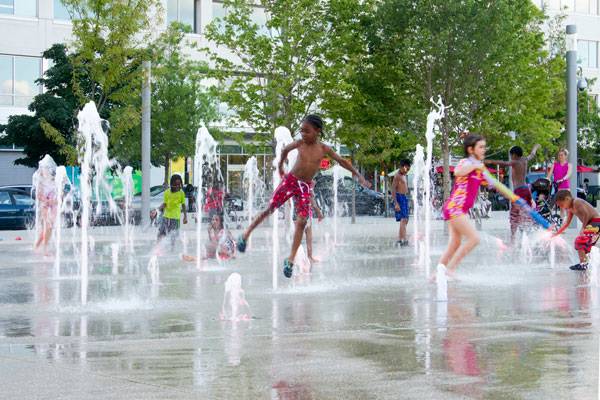 At the bottom, you will find the coffee shop and the breakfast area. Fast food services are also available as the perimeter is the location of many food trucks, which have emerged as a new trend and fast food alternative in the city. Would you like a good refreshment in hot weather? You can do it !! This project also has a dancing-jet fountain in front of the pavilion, which embellishes the site with its beautiful dance and show of colored lights that make this a magnificent experience for children and adults. 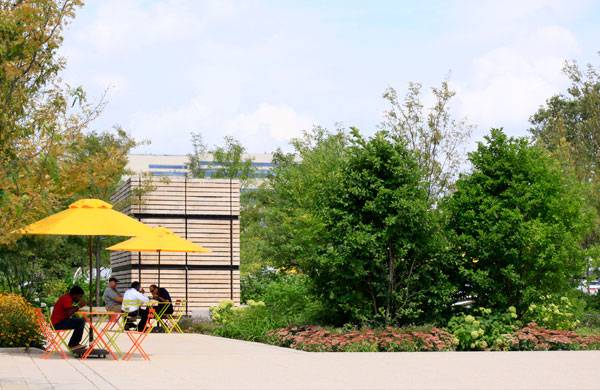 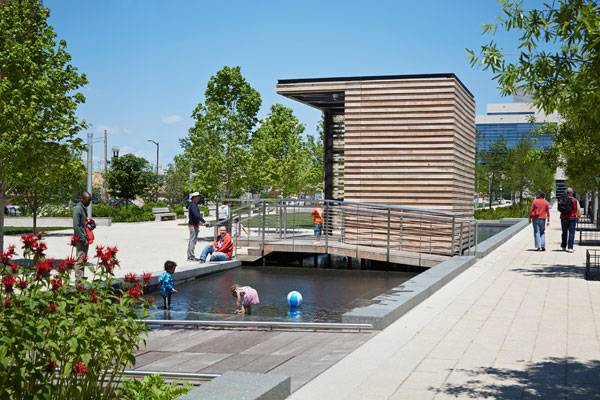 This area also has benches that delimit the space and entice the spectator to sit in different positions and the children to enjoy spontaneous games. In the winter months, the fountain is replaced by a magnificent ice rink that reminds us of the ancient tradition of skating on frozen canals. Everyone can enjoy the serene environment caused by the native and adapted magnolias located by the three blocks that make up the park, as well as the Rain Garden, which is located in plots and parts not built up, capturing the water and recharging the aquifers of the city. 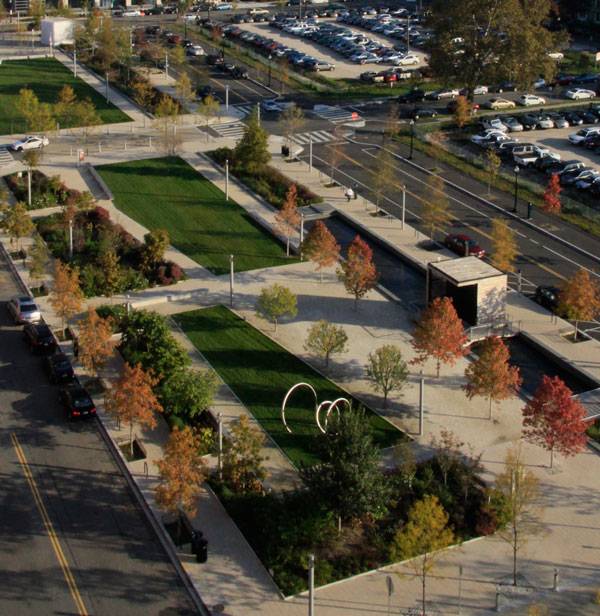 The lanterns that illuminate the park were placed at strategic points inside the garden to refer to the barges that once transited the place. The tree boxes were designed in such a way as to generate less impact. And what about the children? As this is not yet over, the multifunctional pavilion located in the center of the park offers children’s plays, as well as concerts dedicated to infants. This outdoor theater appears to float on a thin layer of water, creating a quiet play and breathing area intended for younger visitors. 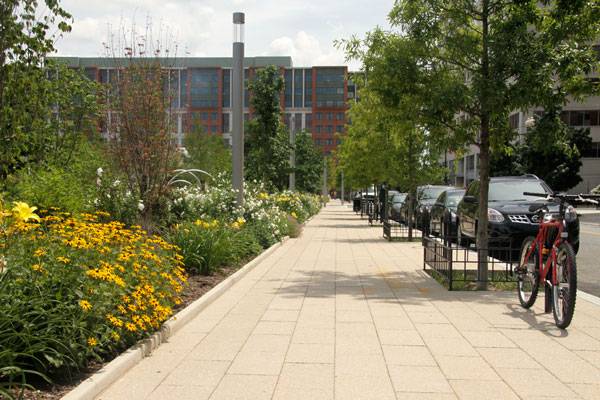 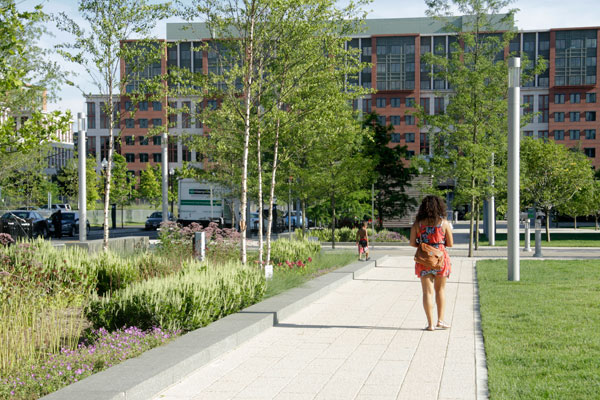 The grandiose stainless steel sculptures, made by David Hess,are located throughout the park, giving it a sense of uniformity and provoking an interactive game between the small visitors of this park, while the large esplanade of grass offers us a flexible space for outdoor films, concerts, games, etc … School groups visit the site often, as play areas for children are protected by a semi-perimeter of benches that makes them feel more comfortable and safe to those who observe and take care of the children. 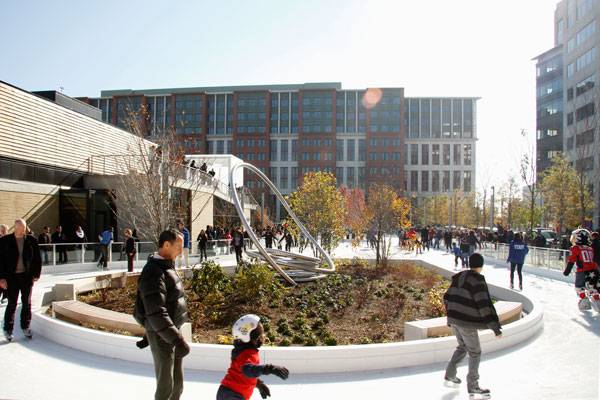 This makes this space a place where there are no age limits and people can interact in a friendly and calm ambiance. This place has lights for pedestrians, bike racks, durable and clean pavement … these things make it a safe and walkable place. Canal Park is also a sustainable design model, serving as a pilot project for the Sustainable Sites Initiative (SITES ™) and a candidate for LEED® Gold certification. Would you like to participate in this grateful and peaceful cultural place? 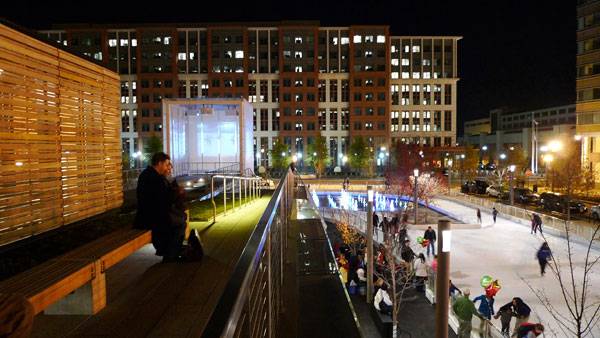