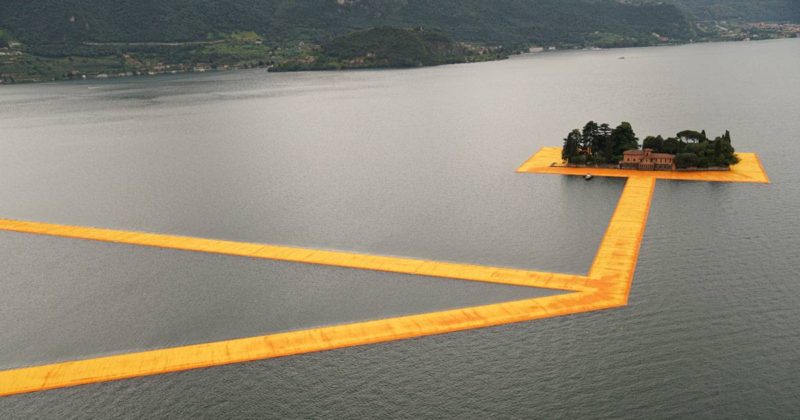 The Floating Piers, by Christo And Jeanne-Claude, in Lake Iseo, Italy. For more than 40 years, the artists had this vision of a floating walkway; the project was first conceived by Christo and Jeanne-Claude in 1970 but not actually brought to life until 2016. It was Christo’s first large-scale project since 2005 when he and Jeanne-Claude realized The Gates in N.Y.C., and since Jeanne-Claude died in 2009. In 2014, when Christo and his team explored Northern Italy’s lakes, they found Lake Iseo to be the most inspiring location of them all. Lake Iseo or Lago d’Iseo is located 100 Km east of Milan and 200 Km west of Venice and is the fourth-largest lake in Lombardy, Italy; the lake is fed by the Oglio River. Through the work of Christo and his team, the place was reimagined and transformed and became the habitat and witness of a miracle coming true; to be able to walk on water. WATCH >>> MAKING OF “THE FLOATING PIERS” BY CHRISTO // ISEO LAKE // ITALY // JUNE 2016

The Floating Piers (TFP) consist of a Modular Floating Dock System of 220.000 high-density cubes covered with 100.000 m2 of a yellow cloth that changes its color depending on the weather and time of the day; it goes from a bright yellow to shades of red and gold. The cubes are joined on the sides with giant screws that pass through a ring-shaped protuberance; this connects the cubes to each other and at the same time allows movement. 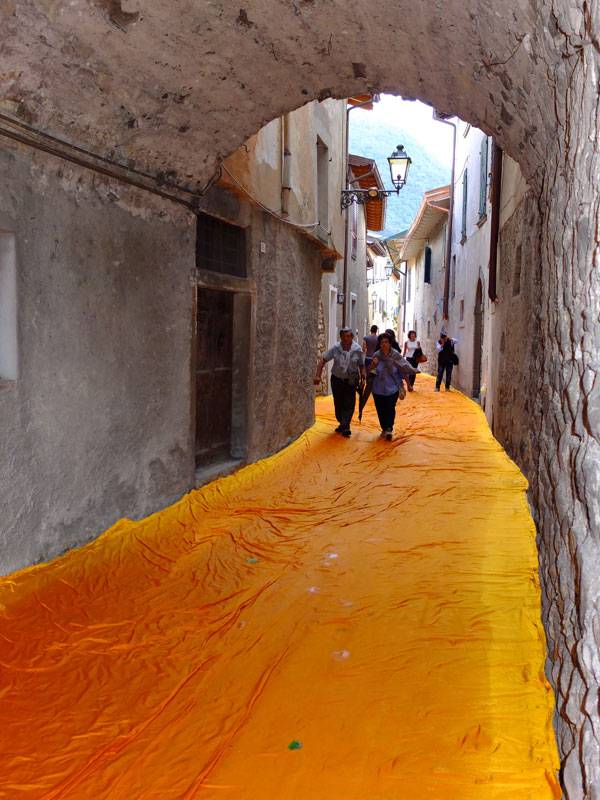 The Floating Piers go from Sulzano to Monte Isola to the Island of San Paolo; the last one is framed by the Floating Piers. The walkway is 3 Km long but the fabric continues along 2.5 Km of pedestrian street in Sulzano and Peschiera Maraglio. The piers are 16 meters wide and 35 cm high with leaning sides; to create the leaning sides effect the outer cubes were filled with water. 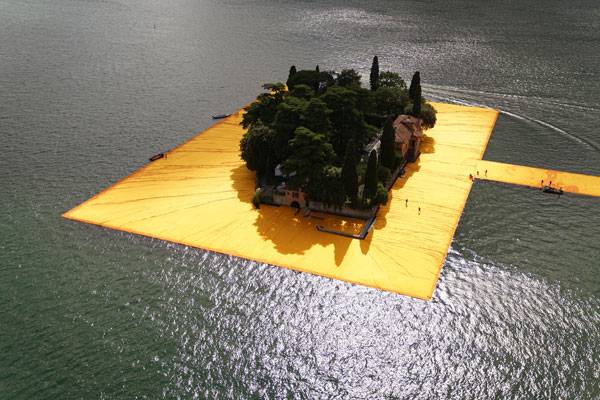 The construction of the piers in situ started on April 19 and was finished on June 18, the Floating Piers were opened to the public only for 16 days and nights, meaning it was open from June 18 to July 3 of 2016. On June 18 at 7:48 in the morning, the piers were finally opened to the public; it had no cost, no tickets, the access was completely free as in all of their projects, but visitors should be prepared for long lines, because for safety reasons only 11.000 people could be on the Floating Piers at the same time. 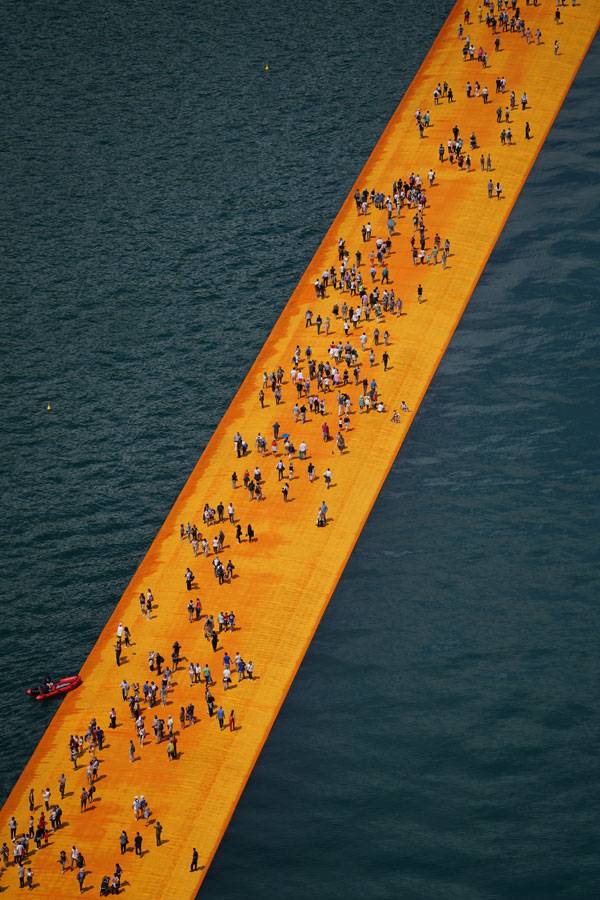 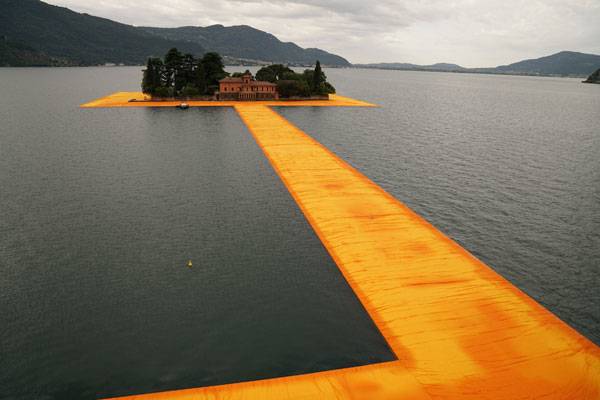 When you step in to a specific space and bring something new to that habitat – in this case, the artist brought a new and never-before-seen attraction to the town – there will be many consequences, some more tangible than others but the city and its citizens will respond to that stimulus. One of the more tangible responses was economic; the nearest stores were out of stock of their products the first day because of the many new costumers that came to see TFP and in some stores they were even selling “special socks” for walking on the Floating Piers. 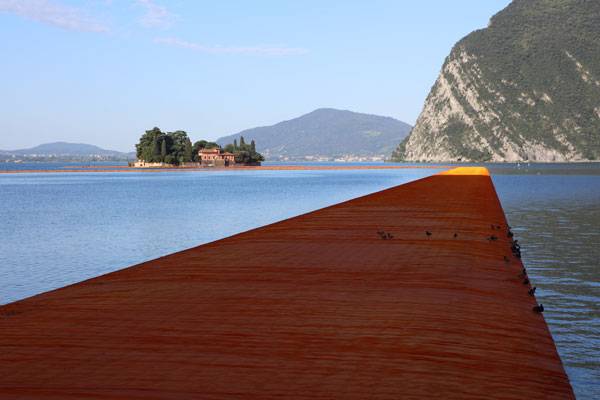 What is incredible is how the artist empowered people to take this temporary street and making it theirs as if they were living a fantasy. When asked about their experience in the TFP people responded things like: “It’s massive, it’s hard to describe, we’re so exited”, “It’s like walking on water. It’s wonderful”; others even said it felt like walking on the back of a whale. 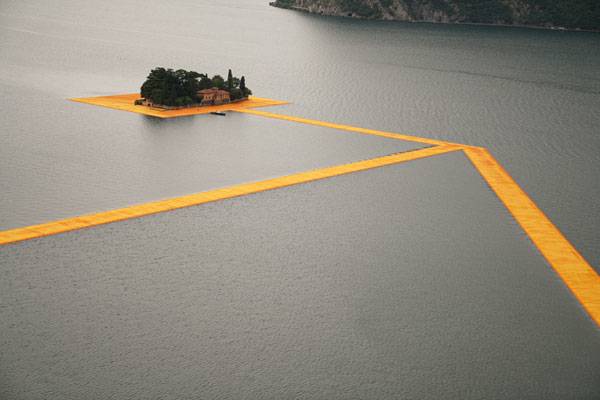 For Kevin Lynch to have places where we could contemplate a city was an important part of feeling that you belonged to a city, of feeling you were a citizen. This project created a new point of observation, a new experience, a new way to contemplate that specific habitat; in conclusion, the project enriched the experience of going to Lake Iseo forever, even when – physically – it is no longer there, that happening will stay on in the collective memory of people for a long time. Well thought-out and executed art can transcend itself and become part of the landscape and the memory of the people.

Do you think that art should come out of the museum more often and directly impact the life of a city?

*After the 16 days all the elements were removed and industrially recycled. 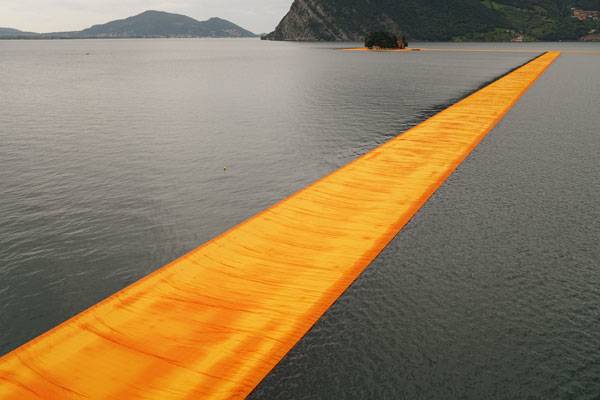