As Landscape Architects, we often look to naturally occurring plant communities for inspiration and precedent for our designs. Vertical gardens are no exception to this rule. Since committing to the topic of vertical gardens for my design thesis, I have been actively reading about, and seeking out, different cliffs. The following is a mix of things I’ve read in various academic sources, and things that I have personally observed during site visits. 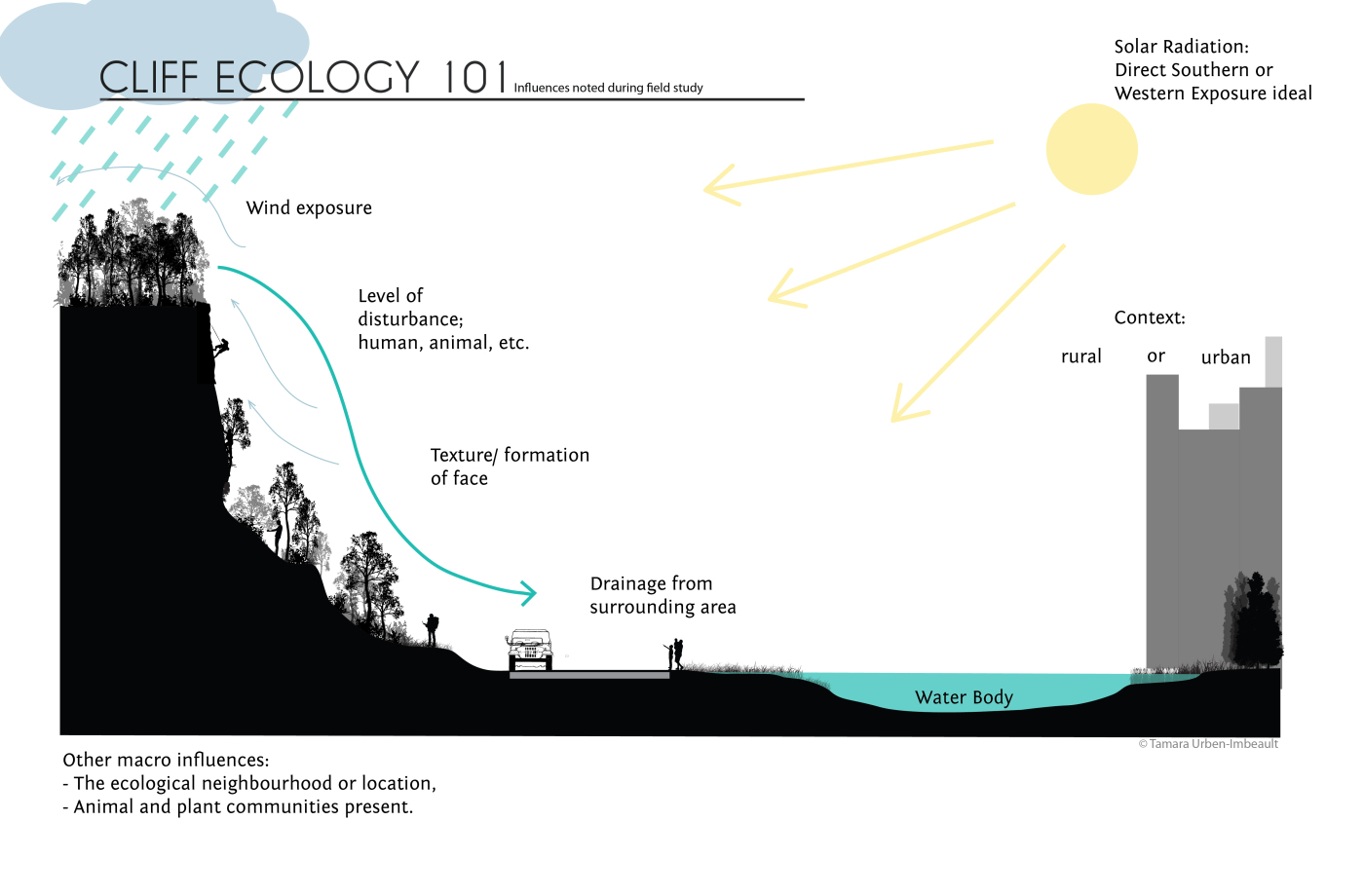 Cliffs host a very unique type of ecology. Studies in the Niagara Escarpment of Canada have found that the cliff-dwelling forests in that region are some of the oldest living ecosystems in North America, with occurrences of Eastern White Cedar (Thuja occidentalis) up to 1,320 years old. These trees, although small and rather gnarly looking, are extremely hardy and often growing out of cracks that are less than 5mm wide. These trees are one of the few species that are able to grow almost completely upside down – with their roots actually growing above their crowns.

One might wonder how such plants have managed to survive unimpeded by other species for so long. The answer that follows is simple, but not obvious. Cliffs are remarkable in that they do not have succession patterns like most other plant communities that we are familiar with. Cliff-dwelling plants are usually species that are unable to compete in ground level communities, so cliffs provide excellent competition-free locations for them. Whatever can grow in the first place stays forever, or so it would seem. 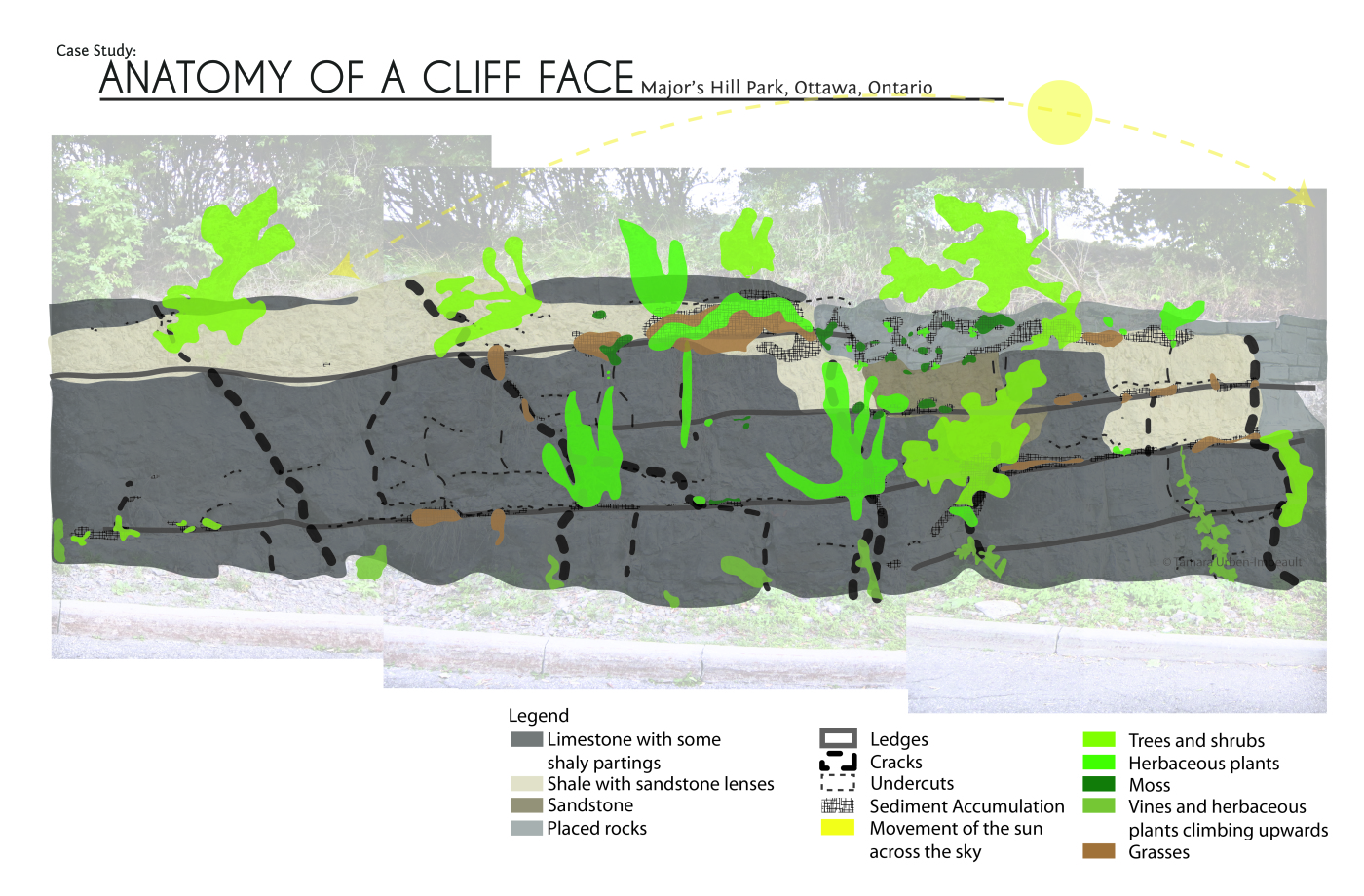 Anatomy of a Cliff Face; A Dissection of a Small Cliff in Ottawa. Image by Tamara Urben-Imbeault

The growth patterns I have observed on Canadian cliffs are outlined in the image above. Usually trees and small to medium sized shrubs tend to occupy the middle to top of larger cracks, while larger herbaceous plants grow in sediment accumulations on ledges and in smaller cracks. Mosses and small herbaceous plants tend to grow in areas where sedimentation is in the beginning stages, or in areas where water flows regularly. The type of rock the wall is made from undoubtedly impacts the pH of the area, however after studying walls with varying textures I believe that the texture of the rock is one of its greatest influences on the community: Whether it is smooth or rough, giving plants sufficient texture to hold on to or not, makes a huge difference in terms of species diversity and density. Another important aspect of cliff communities is that the plants will generally only be able to establish themselves in areas that are slightly more protected. This is demonstrated by the fact that many of the plants present on the wall have grown inside cracks, or areas with a higher amount of sediment build-up. 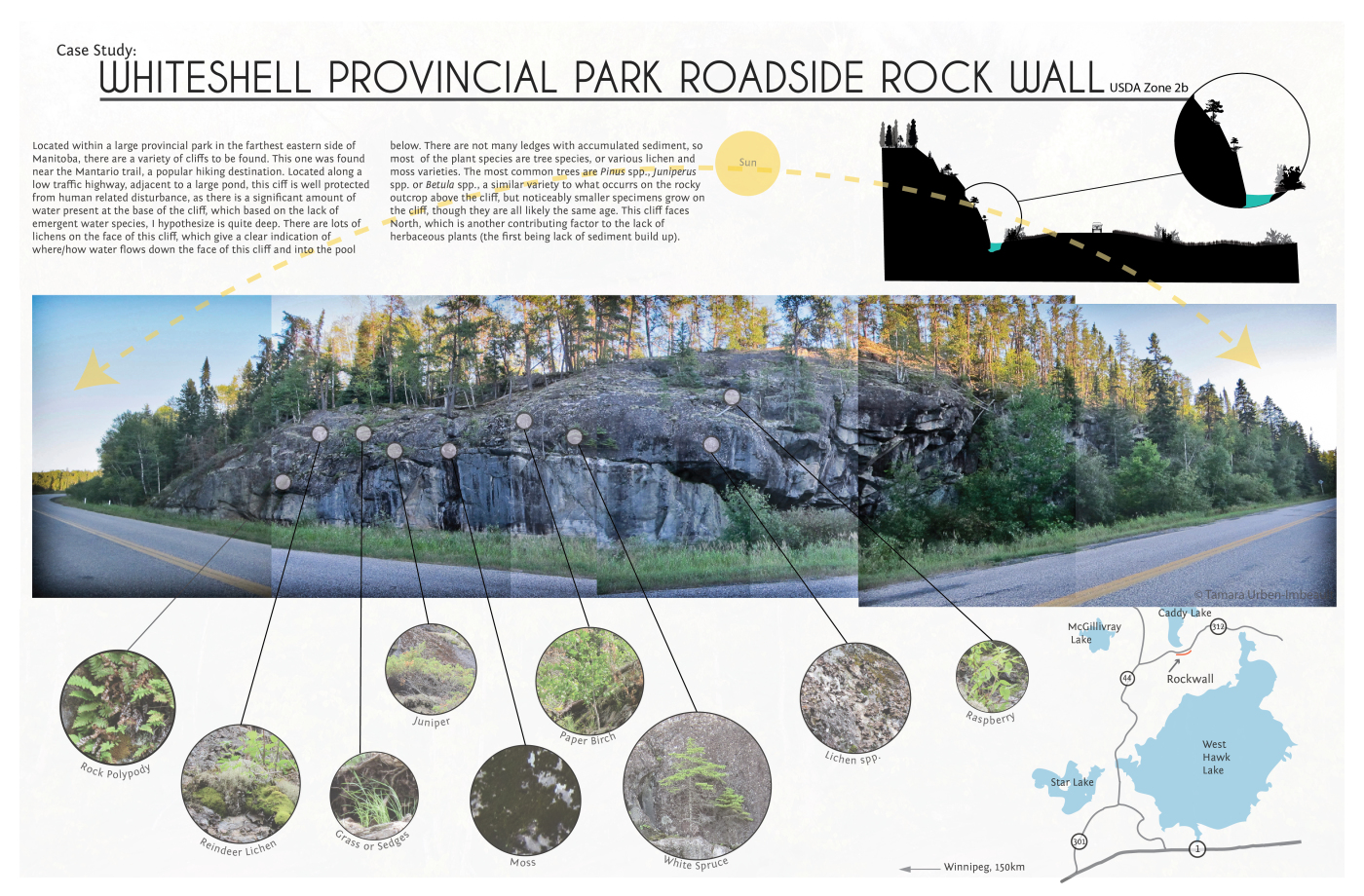 Cliffs are not naturally prone to high levels of disturbance. Because of their verticality they have been largely spared from humanity’s quest for development, and the animals that are able to climb cliffs are also generally less numerous than ground dwelling species, which spares cliffs from total colonization. Cliffs, much like man-made walls, are also subject to disturbance from wind. This usually manifests in the growing patterns of plants on the cliff, as well as their distribution.

As mentioned earlier, the type of rock that the cliff is composed of has a significant impact on what can grow there. It also impacts the architecture of the cliff, i.e. the number of ledges, cracks, undercuts, erosion, crumbling, and the overall shape. The pH of the rock impacts the plant community in that the plant types found will either be calcifuges (‘lime avoiders’) or calcicoles (‘lime seekers’). Calcifuges will be generally found in siliceous rock that produce acidic soils, while calcareous rocks produce chalky soils with neutral to high pH values, so they will only host calcicole plants.

The most commonly found animal species on cliffs are amphibians, reptiles, rodents, raptors and sea birds. Larger mammals like coyotes, sheep, goats, bobcats or pumas may also be present, depending on the scale and location of the cliff. The surrounding ecological community, as with any landscape, greatly impacts who/what is found on the cliffs. While most animal species found there are not completely dependent on cliffs for their survival, in the Niagara region a small rabbit-like rodent named the Pika, (Ochotona priceps) defies this general rule. The Pika depends entirely on a part of the cliff known as the talus- a rocky pile that often accumulates at the bottom of a cliff- for shelter from predators and for nesting. Without the presence of several undisturbed tali, the Pika would become extinct.

Stay tuned for the next post in our Vertical Gardening Series, where we will explore Biofilters!

Written by Tamara Urben-Imbeault, M.L.Arch. student at the University of Manitoba, Winnipeg, Manitoba, Canada. She is currently working on her design thesis entitled “Vertical Gardening in Cold Weather Climates”
Contact: umurbeni[at]myumanitoba.ca or t.urbendesign[at]gmail.com