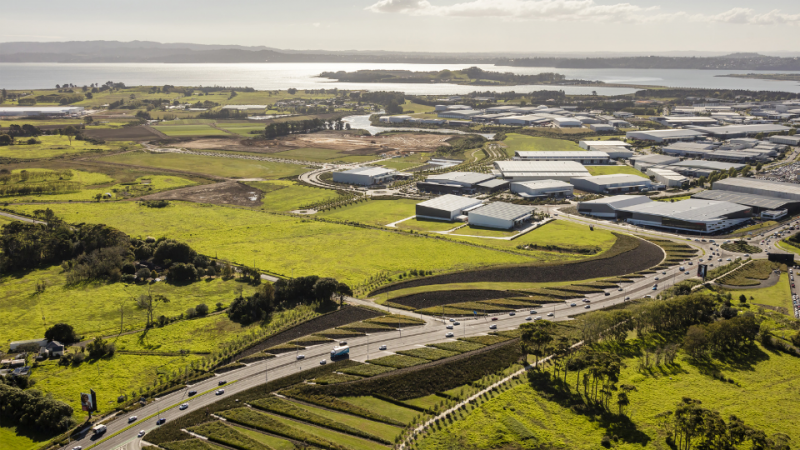 Industrial expansion can—and should—be environmentally and culturally conscious. Nearly 20 years ago, Auckland International Airport (AKL) created a long-term expansion plan that prioritized sustainability while celebrating the country’s rich cultural and agrarian traditions. Our firm was hired to review development plans for six square miles (1,500 hectares) of property at and surrounding AKL. That exercise led to design work for phased projects on the airport-owned property through 2044.

The client’s performative prerequisites focus on watershed remediation—much of AKL’s property is adjacent to either Manukau Harbour or Oruarangi Creek. The other primary directive is to minimize the project’s carbon footprint by reusing excavated dirt in other parts of the property to avoid trucking it to a landfill. Big-picture goals include creating a network of green spaces and extending the country’s National Bike Trail.

We embedded these requirements into designs inspired by New Zealand’s nearly 800 years of distinctive landscape and planting traditions. In the 14th century, the first Maori canoes arrived from Polynesia. Otuataua Stonefields—one of the first indigenous villages and now a national reserve near AKL—is named after the Maori practice of stacking volcanic rocks to extend growing seasons for their imported tropical plants. (European immigrants stacked native rocks to make garden walls, starting in the 1800s.) 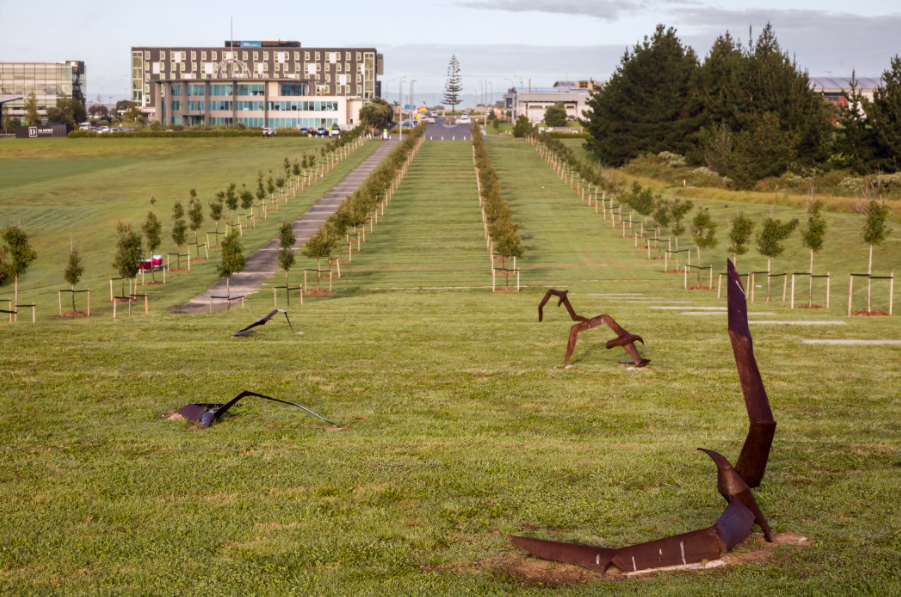 We incorporated this influence into one of the project’s first phases—rock-covered mounds that separate multi-use paths from the airport’s main feeder road. Known as First (F)light, a play on air travel and the fact that New Zealand is in the time zone that begins each new day, the design includes locally sourced basalt rock. Geometric patterns for the hardscape and plantings integrate V-shapes, which represent bird flight and reference the chevron patterns painted on AKL’s runways. Turbine-blade shapes inspired by jet engines are also part of the design.

The project’s preservation efforts are prominent at Abbeville Estate, a popular Auckland wedding, conference, and event venue located across from AKL’s business district. Runway expansion encroached on historic Westney Church and Westney Homestead, built in the mid-19th century. Working with New Zealand’s Historic Places Trust, the airport arranged for the home and church to be relocated across the property to Abbeville Estate. From 2010-2012, these buildings were restored along with the estate’s existing home and barn. 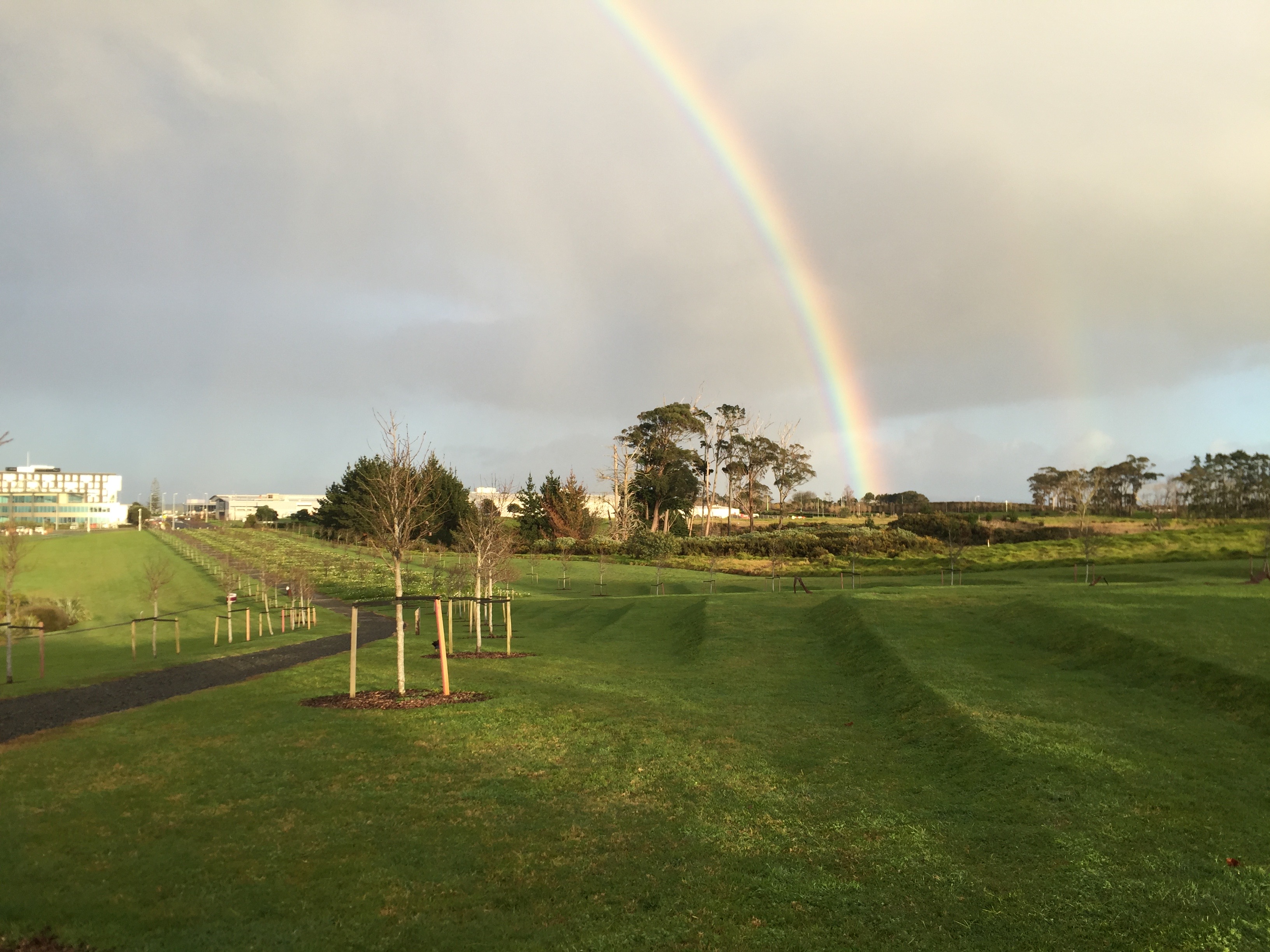 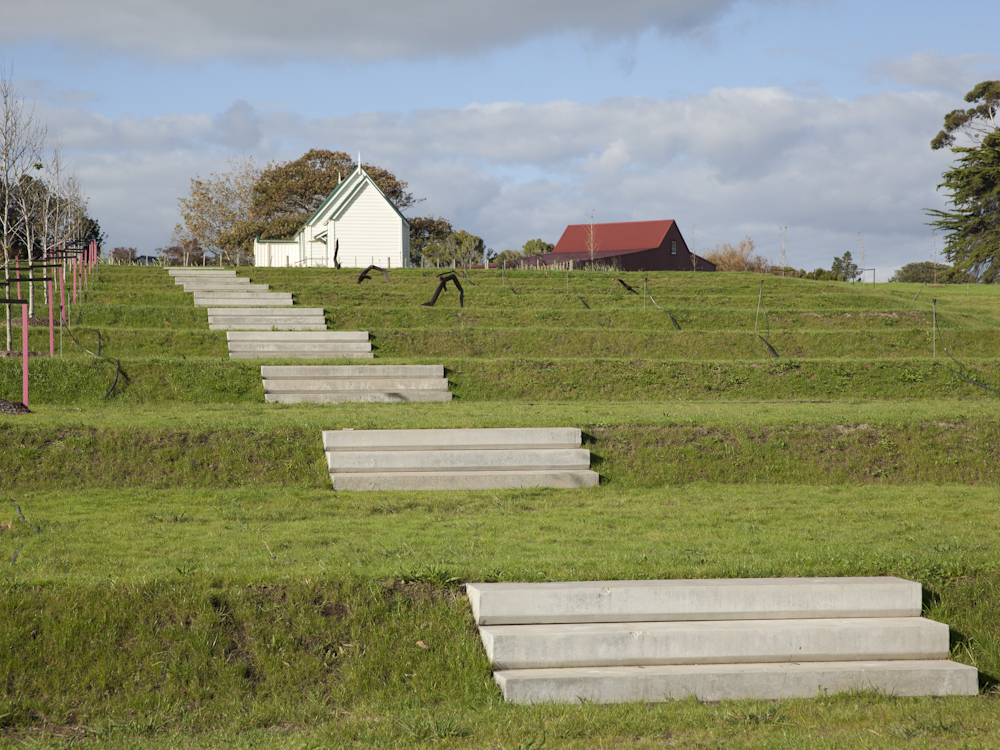 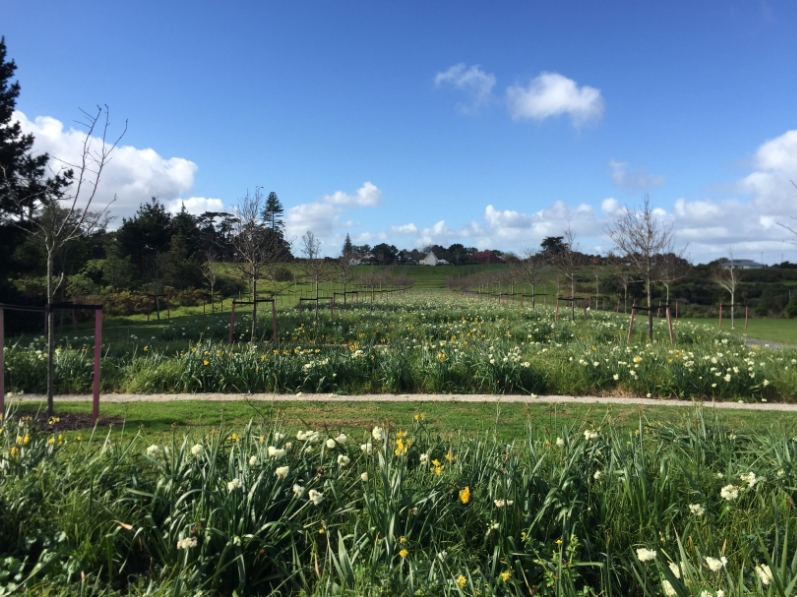 The estate’s procession-way visually extends a shell-inspired pedestrian esplanade, which serves as a shared entrance to the Auckland Airport Sculpture Park and Walk. Part ecological intervention and part artistic amenity, this park is an outdoor gallery with paths that meander among native trees and groundcover plantings. AKL’s primary stormwater retention pond is the centerpiece. It is cradled by lowland edge plants, which bolster wildlife habitat—assisted by a corridor of trees that protects birds by leading them to the pond, away from airplanes. Sculptures by Kiwi artists, situated in the curated landscape, highlight regional craft and expression, further integrating New Zealand culture into the design.

Near the Sculpture Park and Walk, Surfacedesign collaborated with local experts and enthusiasts to design The Runway Mountain Bike Park. It features approximately three miles (five kilometers) of novice and intermediate trails, which are identified with airport-themed names such as “Takeoff” and “Final Approach.” Next to an existing soccer field, The Runway Mountain Bike Park offers a diversion for airport visitors, local workers, and Auckland cycling enthusiasts. It also demonstrates the airport’s continuing commitment to hosting free, public recreation. 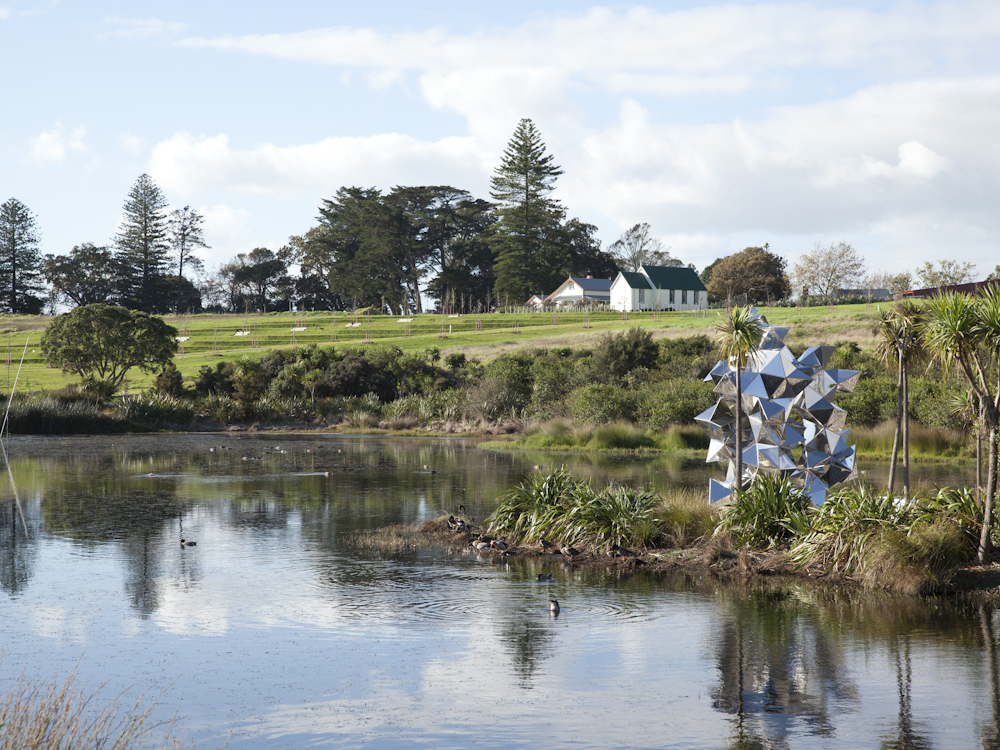 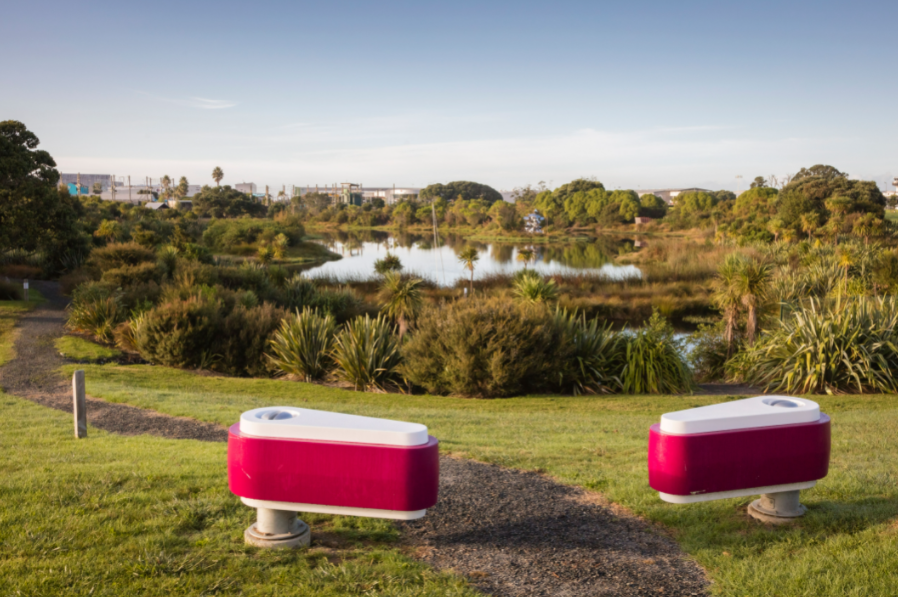 Surfacedesign curated the Sculpture Park’s paths and plantings to accentuate the art. The park’s signature piece is “Flippers” by Aaron McConchie. Photo by Blake Marvin 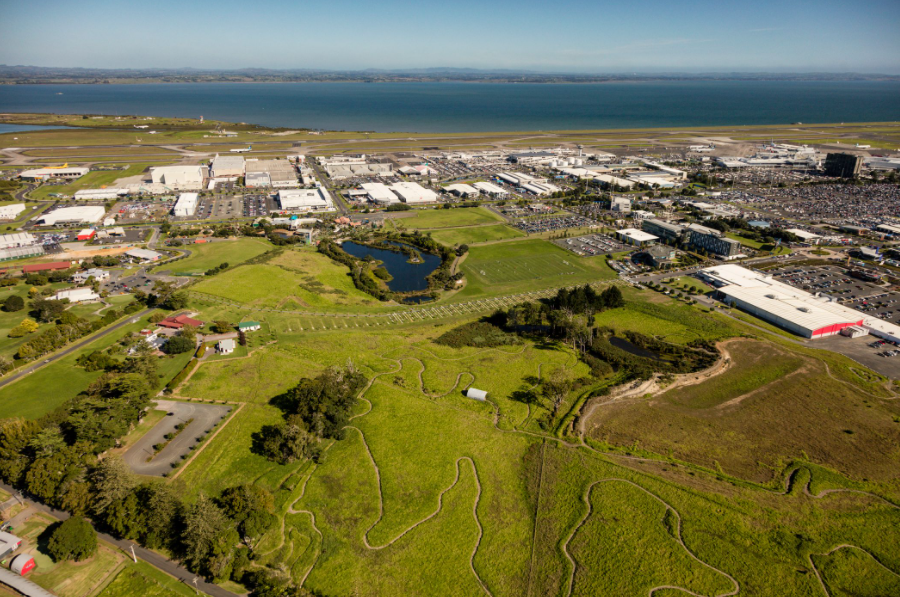 AKL’s commitment to public recreation is evidenced by The Runway Mountain Bike Park. Surfacedesign conceived three miles of trails on this airport-owned parcel next to Abbeville Estate. AKL’s runways are in the background. Photo by Blake Marvin

Future phases will include improved stormwater management and culturally inspired landscape upgrades to AKL’s terminal plaza and drop-off areas. Further, The Landing Business Park just north of the airport is growing to accommodate logistics companies’ increasing demand for office and warehouse space. We worked with Auckland contractors to create a custom aggregate mix for the office park’s curbs and pavers using locally sourced, recycled volcanic rock. More durable than standard gray concrete, it has a darker tint. Excess excavated dirt from this project is being reused at the nearby Oruarangi Creek Public Open Space, a new 45-acre (18-hectare) creekside park that will incorporate the country-long National Bike Trail. The dirt will be mounded in patterns inspired by abstracted, large-scale shells, in homage to the Maori’s enduring reliance on Oruarangi Creek. (The local tribe colloquially calls the creek “the refrigerator” because it contained their food supply for centuries.) 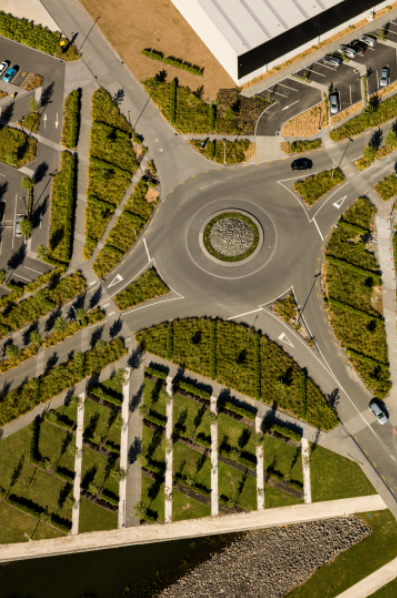 One of many projects we are fortunate to work on in New Zealand, the Auckland International Airport landscape has required the most long-range planning and is the most ecologically sensitive of any project undertaken in our firm’s 20-year history. It is also one of the most impactful—airport travelers (75 percent of the country’s visitors) are exposed to New Zealand’s rich agricultural heritage by air and land, presented in abstracted designs that celebrate traditional Maori and European practices.

Lead Image: The project’s first phase flanks the airport’s primary gateway road with a landscape design that celebrates New Zealand’s agricultural traditions from land and air. Flight-influenced shapes include Vs from flocks of birds and jet-engine blades. Photo by Blake Marvin

James A. Lord, FASLA
James A. Lord is a Co-Founding Partner of San Francisco landscape architecture and urban design firm Surfacedesign. Its honors include a Cooper Hewitt National Design Award, Architectural Digest Innovator recognition, and an Architectural League of New York “Emerging Voices” award. The firm’s work is the subject of Material Landscapes, a monograph published by The Monacelli Press (2019). Lord holds a Bachelor of Architecture degree from the University of Southern California and a Masters in Landscape Architecture from Harvard’s Graduate School of Design. Photo by Leon Hordijk, courtesy of Surfacedesign