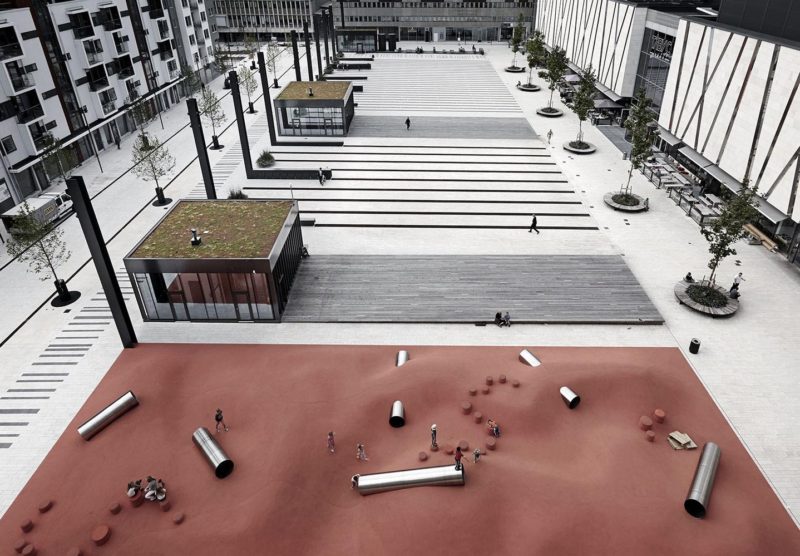 Article by Gwgw Kalligiannaki Täby Torg Square by Polyform Architects in Täby, Sweden. In the 1960s, the City of Täby joined the Swedish “Million Programme” to help solve the housing problems in the city. The project’s goal was to build one million apartments in a short period of time and to provide a roof for all. Although the speedy rebuild was very successful, the town’s appearance was monotonous and lacked public space. Therefore, in the early 2000s, the Municipality of Täby decided it was time to resolve the issue and transform the public, urban life of their citizens. To do this, they selected the parking lot of the city’s main shopping center and converted it into a space to host public events and activities. Danish firm Polyform Architects was commissioned for the design of the New Centre and brought a sense of character to the city. Their design for a multi-functional square was cleverly organized into six themed squares, each with its own identity, and each providing different opportunities in public life. 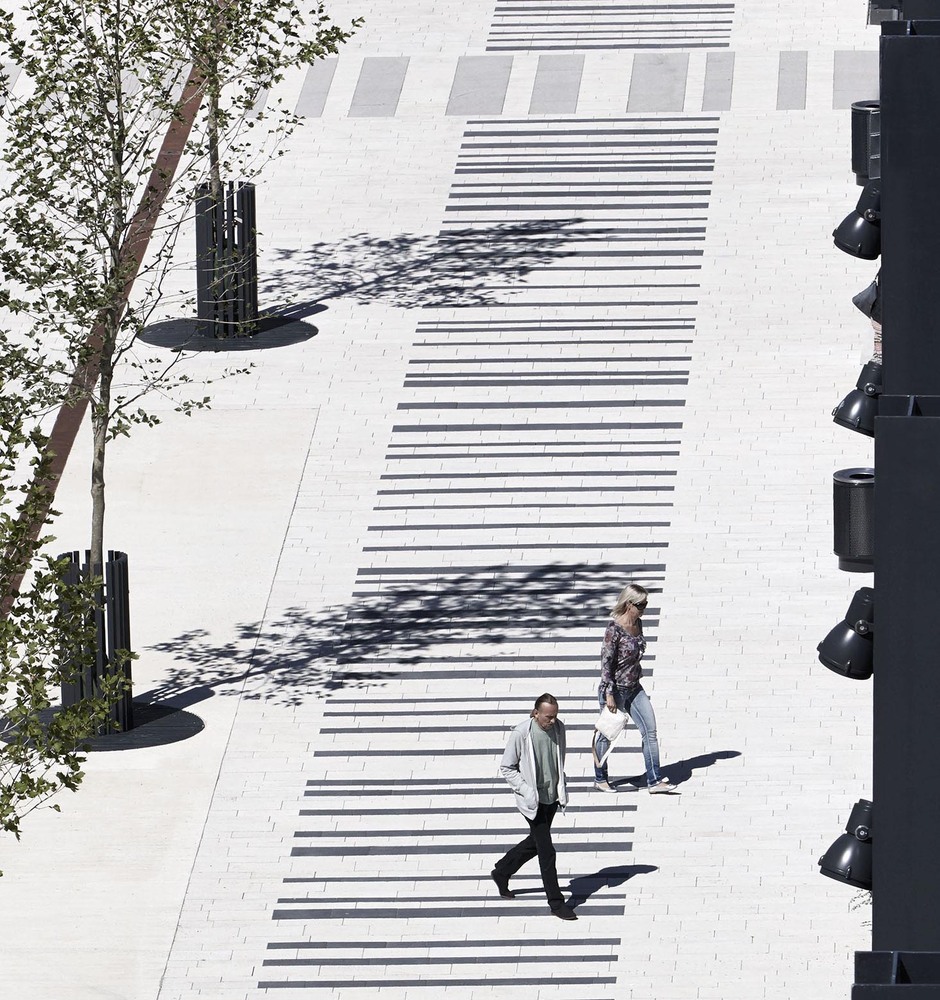 Organizing a Barcode Master Plan Polyform Architects chose to divide the project into a row of six smaller squares to create a patterned, human-scaled urban experience. The idea of a barcode form is supported from the direct layout of the site. Each square has its own identity, but they are all bound together. Although, the design is strictly based on linear elements, the playground area is a more unregulated configuration. Also, the entire site has a strong bond with light, using over 500 lighting elements, ultimately shaping different experiences during the entire year and especially on the dark, winter Sweden days. The Multi-Squared Pattern                    Faced with creating a multi-functional open space in a 10,000-square meter old car park, the architects elected to divide the site into six zones, each with its own role, providing space for all the public activities that occur in a modern square. The seating square was made to relax and enjoy, while the market square created a set for farmer’s markets and flea markets. Meanwhile, the stage space gives the square the opportunity to host theater and concerts and the light space consists of rows of lights with accent lights. Finally, the orange playground was created for children to play and have fun and the water square has 120 water jets that work in harmony and is the biggest water fountain in Sweden. 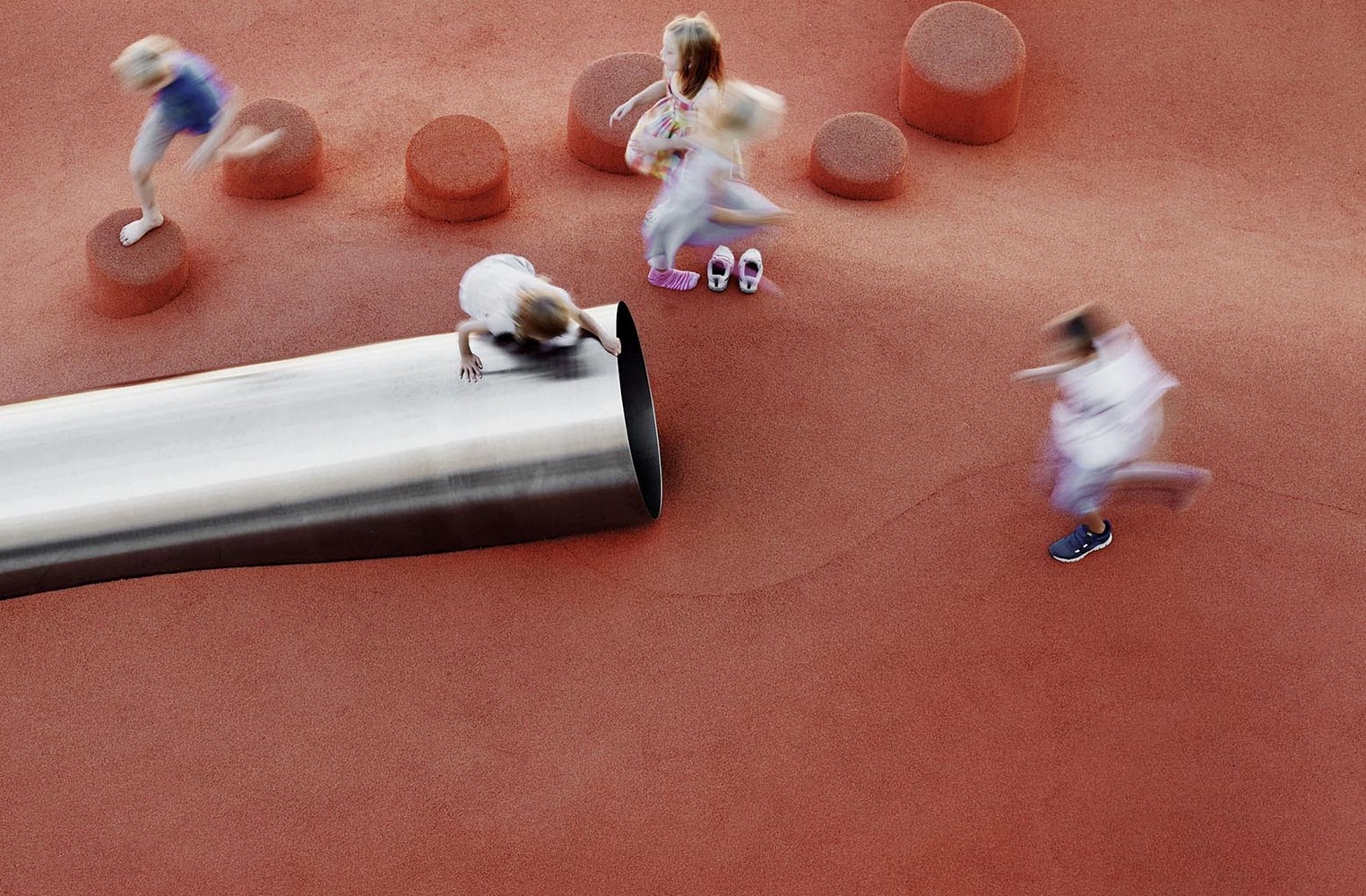 Material Palette and Urban Equipment  Highlighting the barcode pattern, each small square is paved with different types of material such as natural stone, poured rubber, concrete, and cast iron. The way the materials were addressed shows a disposition to emphasize each square’s character and role both graphically and programmatically. Oversized L-shaped lighting poles were placed in a row along the square and serve a double role as urban furniture. Small pavilions made of black steel are positioned along the perimeter and are used as cafes or shops. Two rows of trees are planted on the sides of the square and are the only plantings. In addition, all furniture that has been used follows the simple outlines and the strict geometry of the project. Lighting Strategy                                   When designing for places where there are long, dark winter nights, lighting has a significant role in the attractiveness of a landscape project. The lighting plan in an open, public space should provide users the sense of security and emphasize the beauty of the site. This concept was reinforced in this project by Polyform. The uniqueness of each square is further defined by a different lighting design. Lighting poles and flooring spots are organized into six different zones, following the functional and morphologic features of each area. Additionally, the lighting elements form a total composition, making the square look like a big frame, where different scenarios can be hosted, every hour of the day, throughout the year. 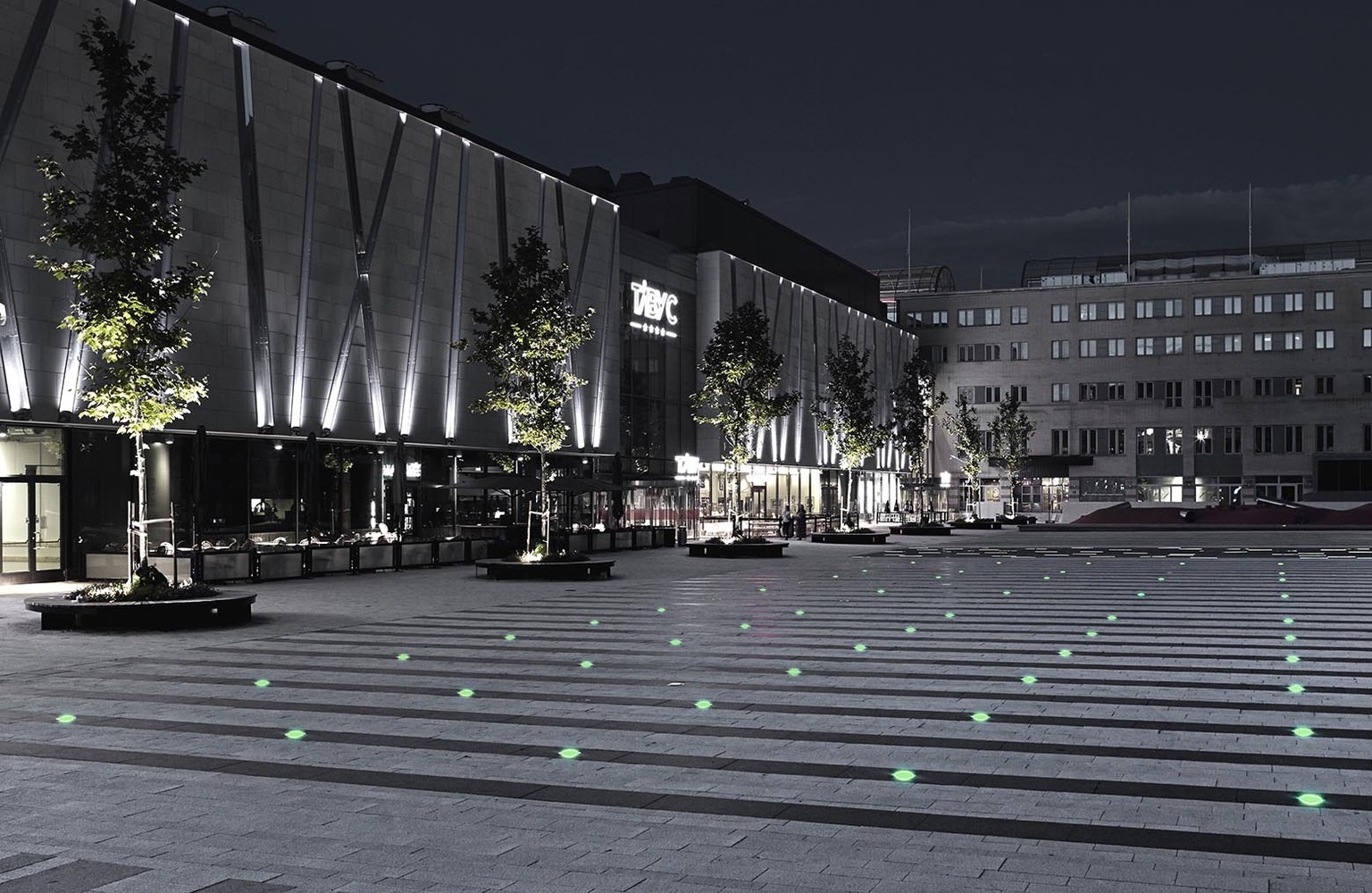 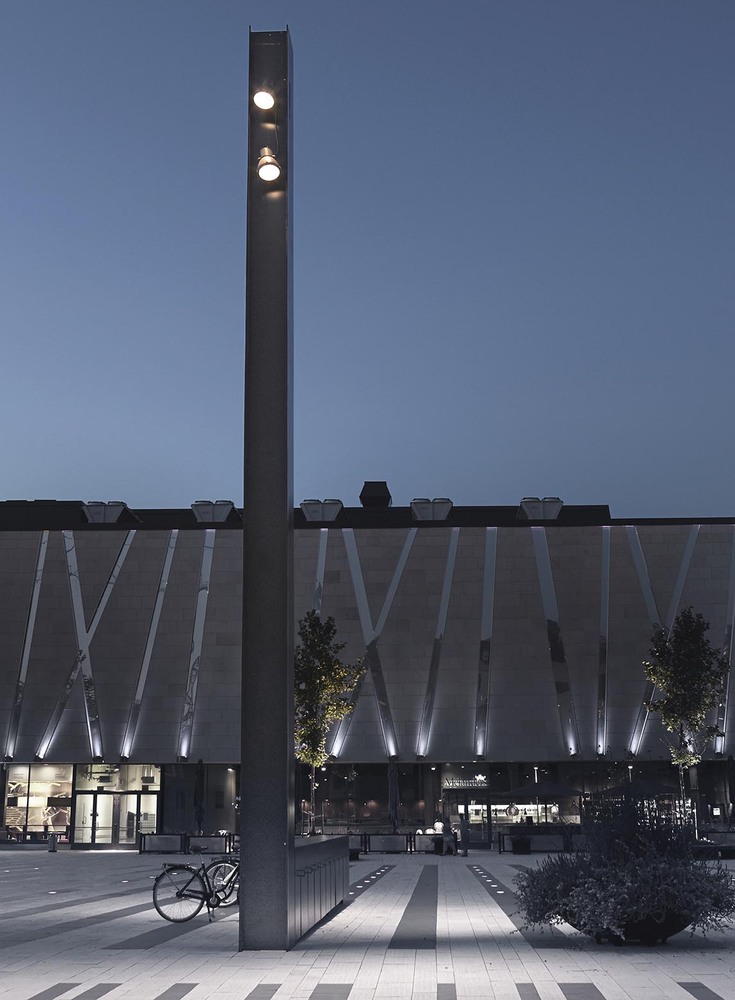 Polyform Architects managed to create a new identity for the heart of Täby on the site of a once anonymous car park. Täby Torg Square is a project with minimal design, but boasts many opportunities. The linear design of the square with its clean lines gives the user the ability to focus on the function of each zone and underlines the flexible and dynamic character of the square. According to the architects, “It would be more accurate to call it a poli-square because the urban space actually contains six squares: the seating square, where people can sit and relax; the market square, for organizing markets; the stage square, for concerts and theatrical performances; the orange playground, for children; and finally the light space and the water square, which through the use of light and water complete the whole atmosphere of the place.” 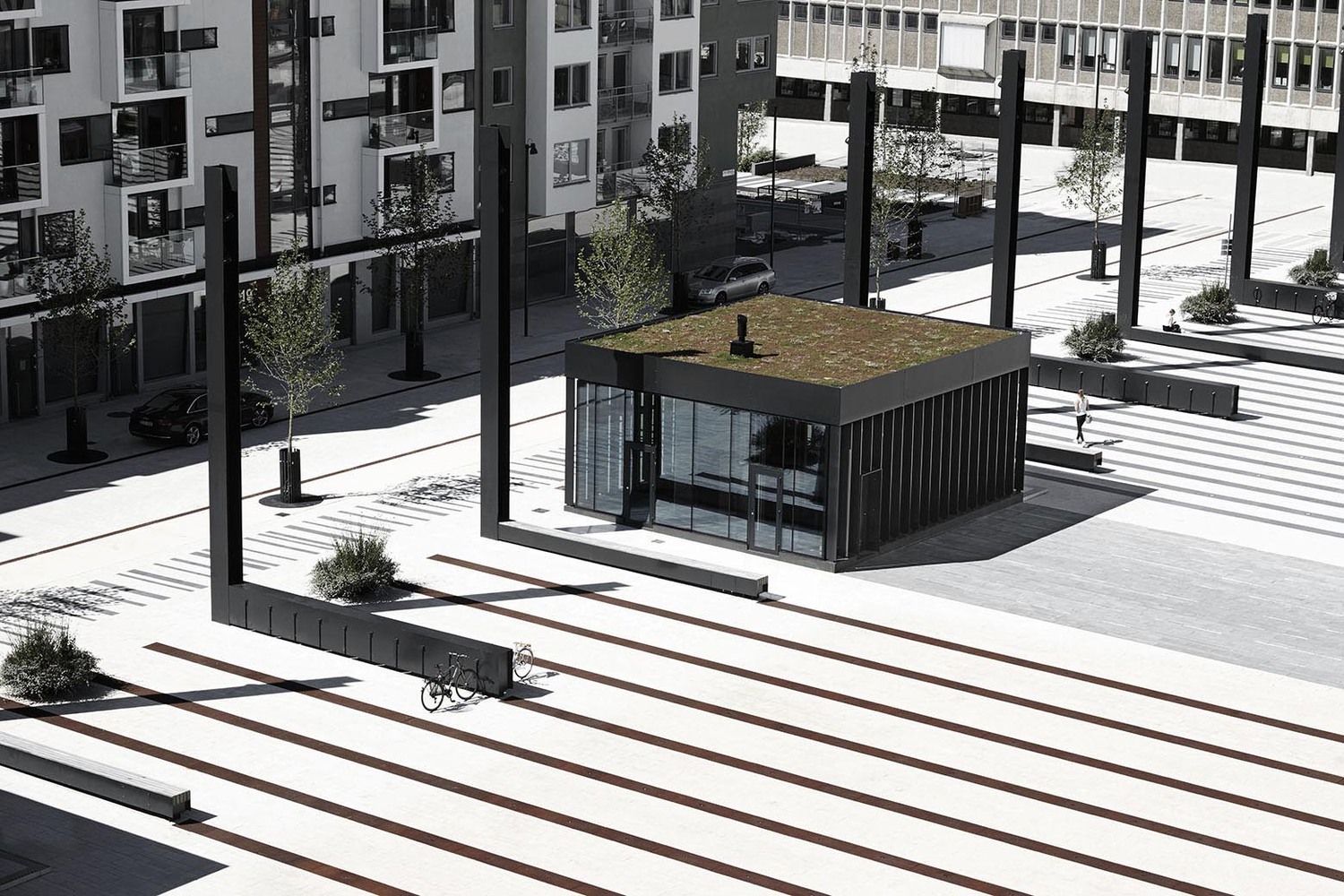