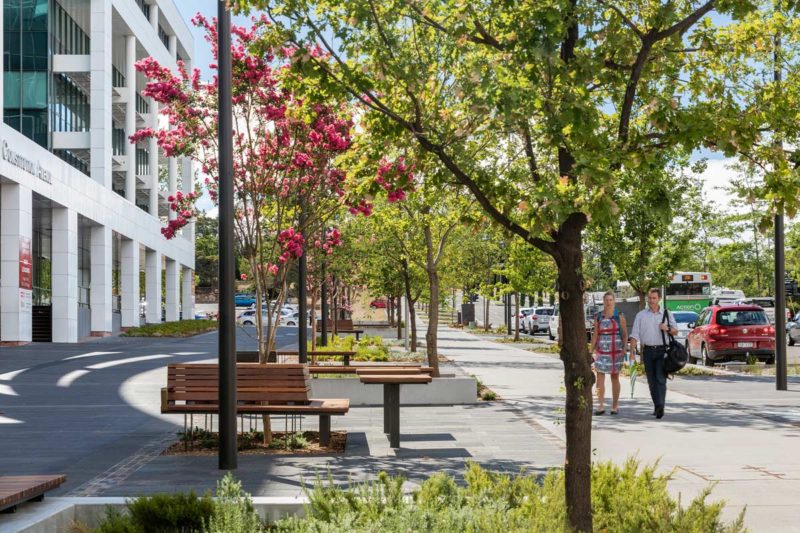 Article by Maria Giovanna Drago Constitution Avenue by Jane Irwin Landscape Architecture along with Hill Thalis Architecture + Urban Projects, and MEC in Canberra, Australia. Constitution Avenue is a key street in Canberra, Australia. In fact, along with Commonwealth and Kings Avenues, it forms the city’s basic geometric design guidelines that developed Canberra in the 1900s. Situated in a lively area, it’s adjacent to residential and commercial buildings, but also recreational and cultural activities. In 2016, Jane Irwin Landscape Architecture completed the renewal project after four years of construction. The renovation brought modernity to this roadside axis, rewriting its role in the city. We can say that Constitution Avenue was influenced by great western avenues like the Champs-Élysées in Paris or La Rambla in Barcelona. The City Design Walter B. Griffin was an American architect and landscape architect who won the international competition for the design of the new capital city in 1912. He and his wife, Marion, developed a plan and ran an architecture firm together. “I have planned it not in a way that I expected any government authorities in the world would accept. I have planned an ideal city – a city that meets my ideal of the city of the future,” said Griffin. 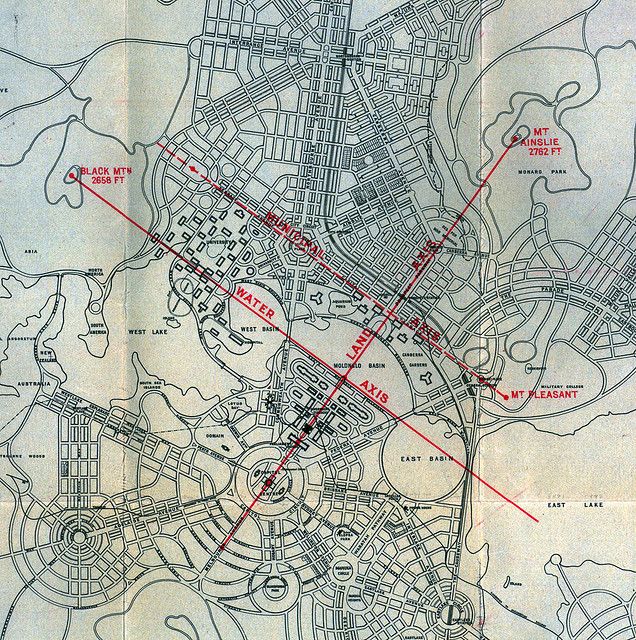 Three avenues form the perimeter of the National Triangle, which is the heart of the city with public and administrative buildings as well as a tourist center. It hosts the Parliament House, the Australian Department of Defense, and the City Hill Park respectively in each of its extremities. The city neatly established around two orthogonal axes that imaginatively cross the center of the National Triangle, which is managed by the National Capital Authority. The Australian Landscape The Griffin’s first heard about the competition while on their honeymoon and pursued it once they returned home. Marion M. Griffin was responsible for the beautiful renderings that impressed the jury, while Walter was responsible for the design. Their project beat out 137 entries and brought them instant notoriety and public recognition. 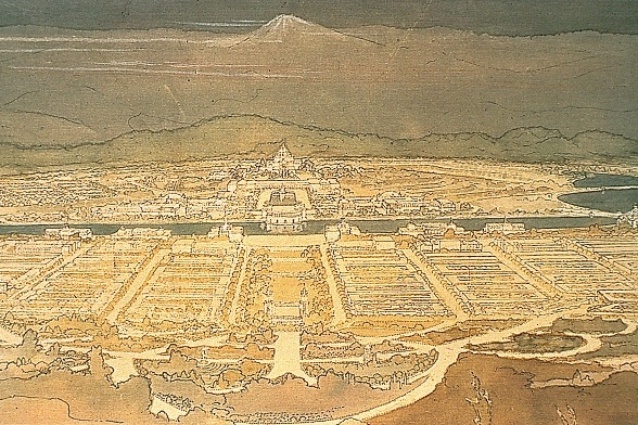 Rendering from the Summit of Mount Ainslie in Canberra by Marion Griffin, 1911. Credit: National Archives of Australia

During Walter’s first trip to Australia he was so fascinated by the natural landscape that he gave plant names to avenues, parks, and neighborhoods such as Clienthus Circle, Blandfordia, and Telopea Park. Ultimately, his design stemmed from his fascination and the concept was characterized by an open atmosphere. Long avenues were flanked with large deciduous trees and the buildings were set in lush, grassy meadows composed of narrow paths amidst rolling hills to represent the countryside. The Avenue Constitution Avenue extends almost 3 kilometers (1.9 miles) from the northwest to southeast and it’s nearly parallel to the Burley Griffin Lake coastline. The City Hill and The Department of Defense are located at its edges and intersect with the Anzac Parade artery in its center. Previously a two-lane, two-way road with parking on the west side, its new design focuses on users, devoting space to pedestrians, and improving the mobility of public and private vehicles. 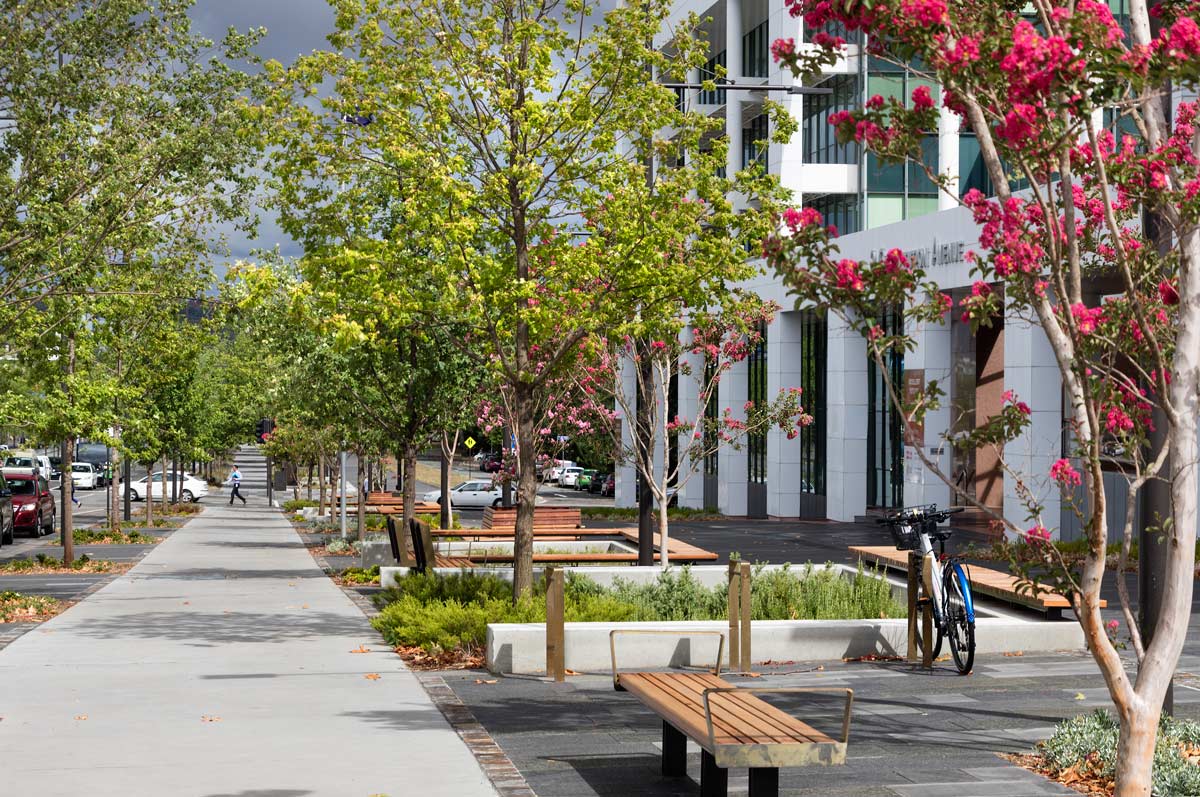 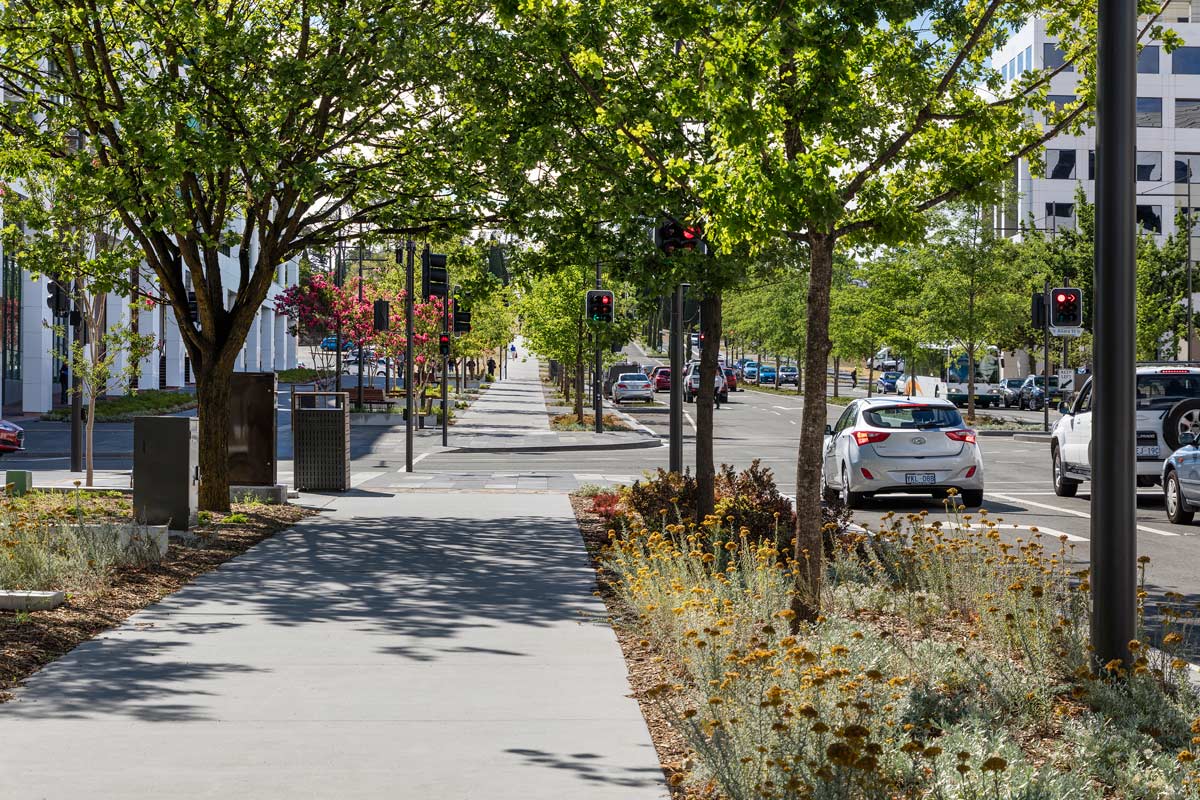 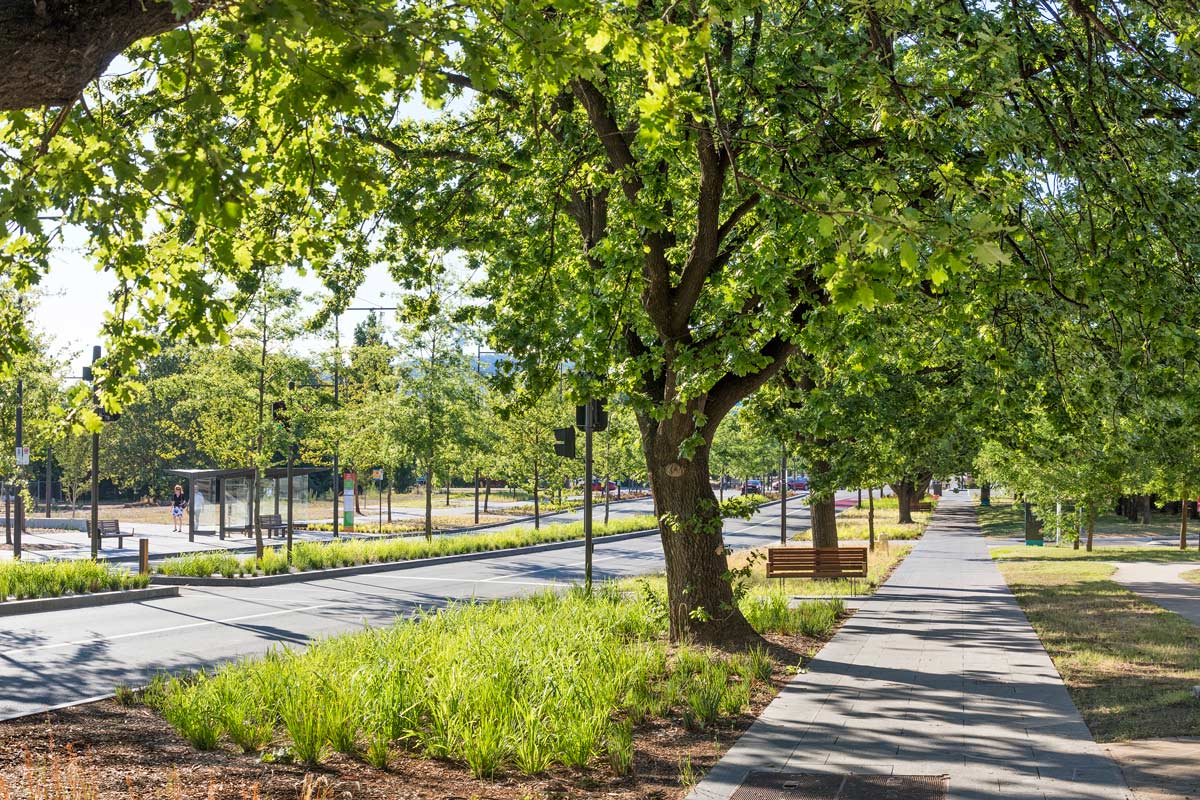 The redesign of Constitution Avenue won the Canberra Medallion as well as the ACT’s top award for urban design. Credit: John Gollings

Today there are multi-direction, double-lane roadways separated by a one-meter wide traffic island, which is tree-lined and planted with small shrubs. Due to better organization and planning, the sidewalks are now wider and the previous paths have been eliminated. They were so badly designed that pedestrians were forced to walk in “zig-zags” or into narrow corridors. Now there’s a linear and continuous pedestrian pathway, which is protected by a greenbelt. The sidewalk on the west side is comprised of several rows of trees, a pedestrian walkway, and resting places equipped with seating. Additionally, motorists can park in parallel parking spaces, which are located at intervals along the road, that also feature dedicated areas for bus stops. 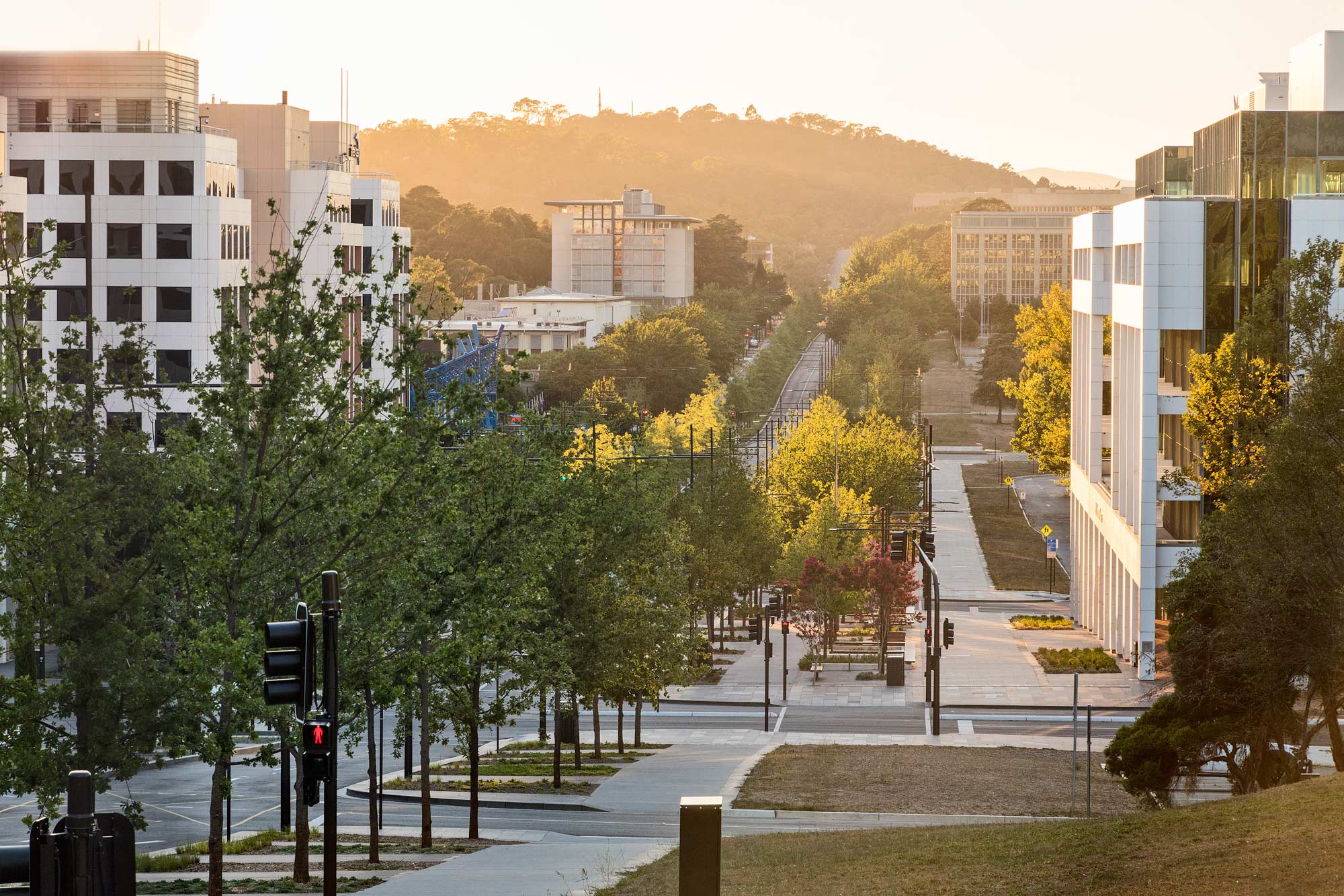 The Furniture Street Furniture Australia manufactured the street furniture, while Hill Thalis Architecture + Urban Projects designed it. Throughout the urban boulevard, various wooden furniture styles dot the site including linear benches with and without backrests, C-shaped seats, and squared tables. Perhaps the most impressive detail are the brass armrests. 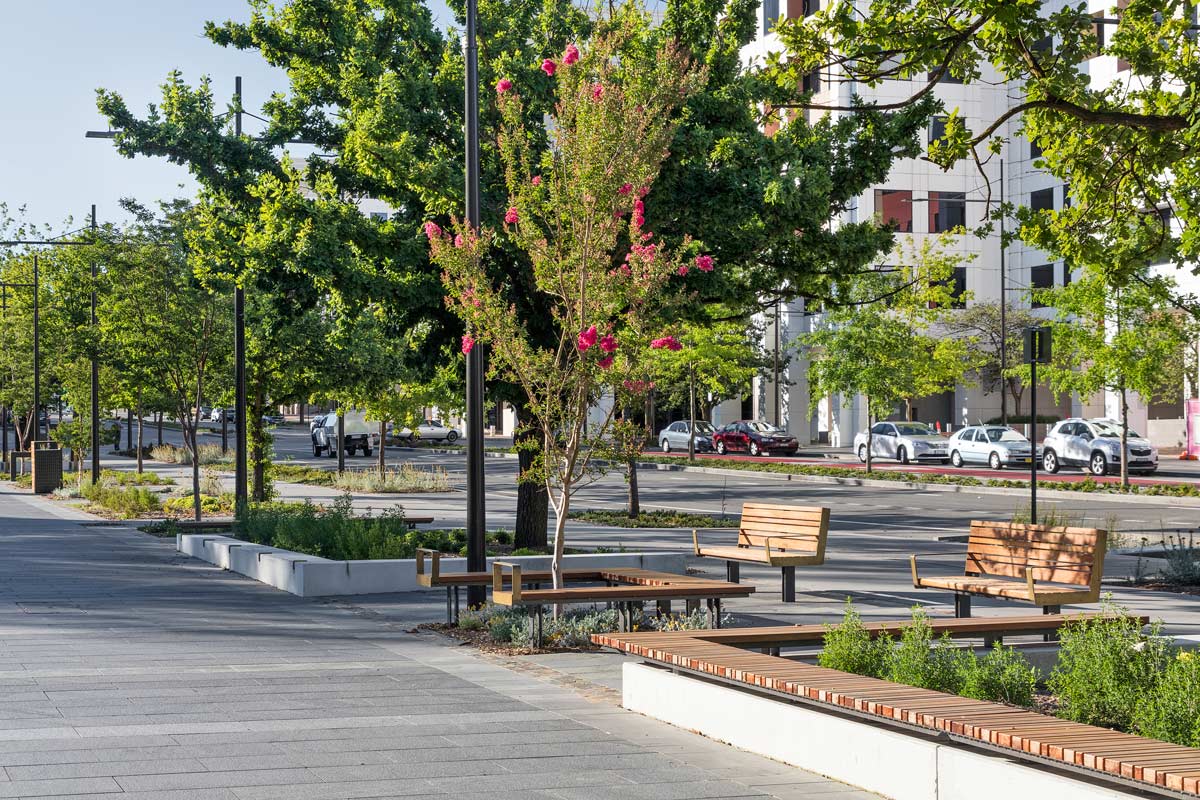 The Flora Over the years, half of the existing oak trees have been removed because of their poor condition and replaced with English and pin oaks, Italian cypresses, and crepe myrtles. Trees are arranged in ordered rows and organized by variety. The only evergreen is the Italian cypress, while the crepe myrtle is the lone blooming tree with pink flowers from July to September. 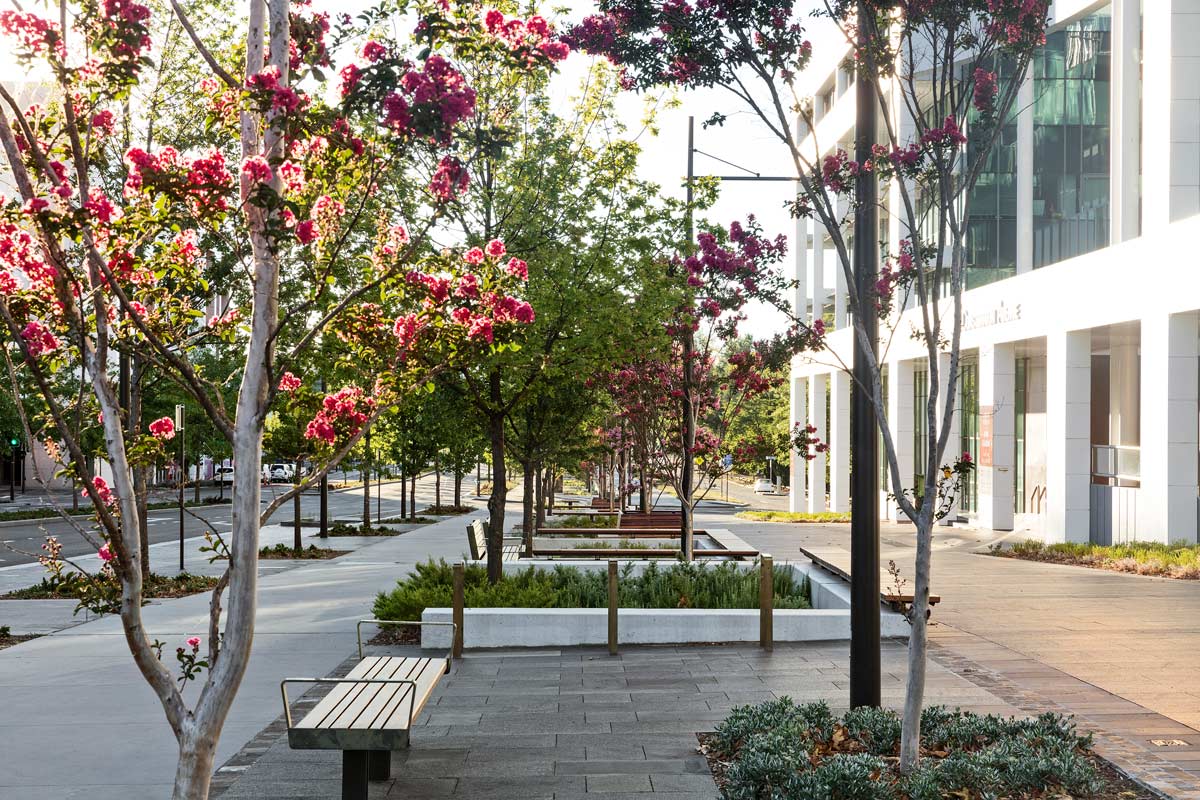