Ben-Gurion University University Entrance Square & Art Gallery, by Chyutin Architects, Beer-Sheva, Israel. Ben-Gurion University, in the Israeli city of Beer-Sheva, is home to the new meditative Deichmann Square that is bringing hope for the future back to a city that is constantly on the verge of losing it. The 3,500 square-meter space incorporates hardscapes and plantings almost seamlessly, while also shining a light on future development, not only on campus, but also in Israel. Located in the western part of the BGU campus, the square is adjacent to existing buildings and the future Negev Gallery, and is meant to serve as a link between the community and the art and social sciences studied in the buildings. This connection is emphasized by a pedestrian path that leads to a city square and then on to the entrance gate of the university, welcoming those from the outside to come in and find solace. 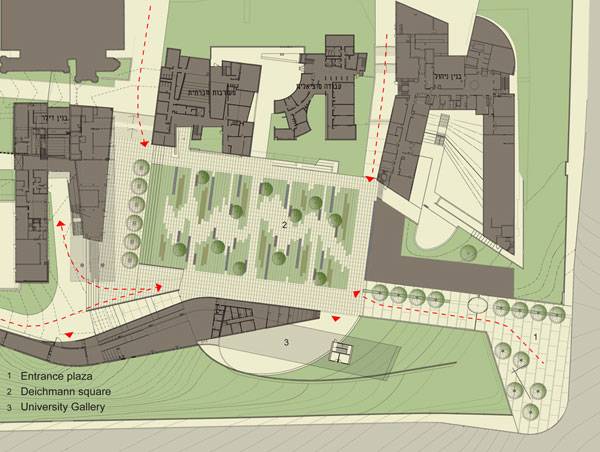 Chyutin Architects Ltd., founded by Bracha and Michael Chyutin in 1978, is the Israeli firm behind the new modern square, and they are known for their design work on academic campuses and cultural institutions, both of which this latest project encompasses. According to their website, they design with the belief that “every architect is a gardener in his garden,” which shows their need to grow and cultivate the country they live and work in. They combine Western, Jewish and Israeli aspects into each of their designs to create spaces that are both modern and traditional additions to the landscape around them. 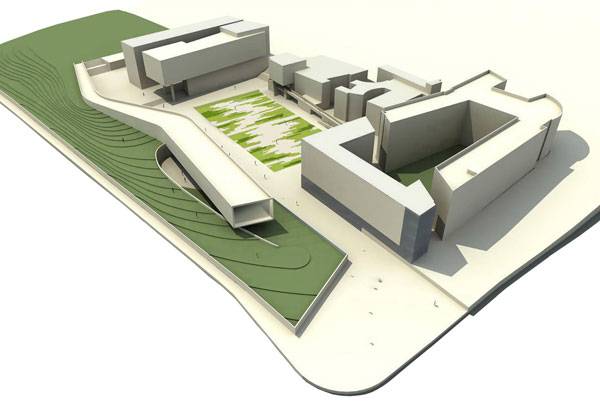 This can be found in the Deichmann square where concrete and vegetation weave together as if in an homage to the Israeli landscape, where large cities lie amongst rolling hills and mountains. They write that their team strives to adhere “to the homeland’s landscapes: to its inanimate matter, to its vegetation, and to its color that is revealed by the blazing sun.” Dramatic Lighting and its Impact on the Space In the case of the Deichmann square, the colors are revealed at night, when up-lighting reveals the blazing stalks of plants and the intricacies of the concrete, making the square an inviting space both during the day and also at night. Planting with Limitations Plantings are broken into long, linear strips by the grey concrete, perhaps symbolic of the tenacity of the Israeli people to survive in harsh conditions and a broken city. While this bright green vegetation stands out and appears to be prominent, the use of plantings is in fact limited since the intention is for students, faculty and the city’s population to use the square as a place to meet and congregate. Large open areas and concrete benches encourage this congregation even more, and further enforce the hope for a peaceful city that would allow for such safe congregation. Related Articles: The design team describes the space as being “designed as a carpet of integrated strips of concrete paving, vegetation and lighting with concrete benches and trees scattered randomly.” The plantings include lawn, Equisetopsida, and seasonal plantings, all planted in linear rows. 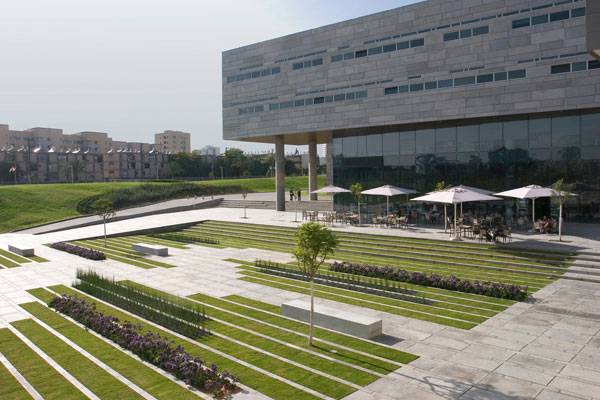 Connecting The Building to The Urban Environment  Finally, the square serves as the connection between the adjacent buildings by extending out to touch each façade, and it also connects the buildings with the urban environment that can be found outside the campus through the pedestrian path. Similarities abound between them, all are rectilinear in form and the use of bare concrete serves as a reminder of the commonalities between the buildings, the city and the square. 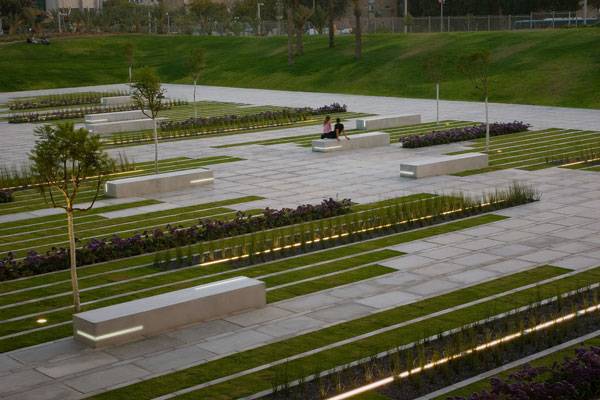 Notable Achievements The project was completed in 2008 and in 2009 it won the ‘Ot-Hitzuv,’ The Israeli Design Award and was included in the 2010 book written by Chyutin Architects titled, From Vision to Reality, Architecture of Ben-Gurion University 1990-2006. Recommended Reading: