Qian’an Sanlihe Greenway, by Turenscape, Qian’an, Hebei Province, China. As children, we grow up listening to fairy tales in which the main character goes through a series of adventures until reaching the top of the mountain. These stories teach us that many things are possible in life; all you have to do is believe. When talking about Sanlihe Greenway, it is practically impossible not to be reminded of Cinderella and her final happily-ever-after ending. Bearing the trademark signature of Turenscape, the Sanlihe Greenway went from a landscape that had lost its purpose to an amazing green infrastructure, demonstrating once more that landscape architecture is capable of genuine miracles. 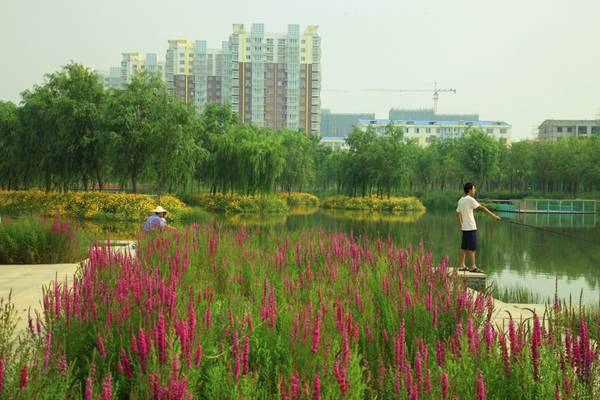 From Pauper to Prince: A Space Revived to Perfection When the team of talented landscape architects from Turenscape was commissioned to work on the Sanlihe Greenway in 2006, the property was not a pretty sight. The space had been commonly used as a garbage dump and, even worse, for sewage drainage. The landscape was neglected, to say the least, and it took a tremendous effort — with an equal portion of talent — to revive this space and organize its green infrastructure. 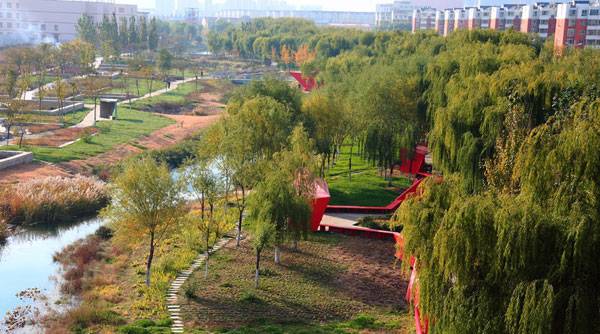 Restoring Local Systems A series of strategies was chosen in order to guarantee the restoration of the local ecosystem. The idea was not only to restore the natural landscape, but to transform it into a functional space for both residents and visitors. Pedestrian and cycle paths were carefully introduced within the new infrastructure, serving a dual purpose (commute and recreation). The whole infrastructure benefitted from the influence of art, with its identity being revitalized with the help of social traditions. It is amazing to see the before and after photos of the Sanlihe Greenway, and it takes just one look to understand that this project is all about sustainable development, providing both ecological and aesthetic benefits. See More Projects From Turenscape: 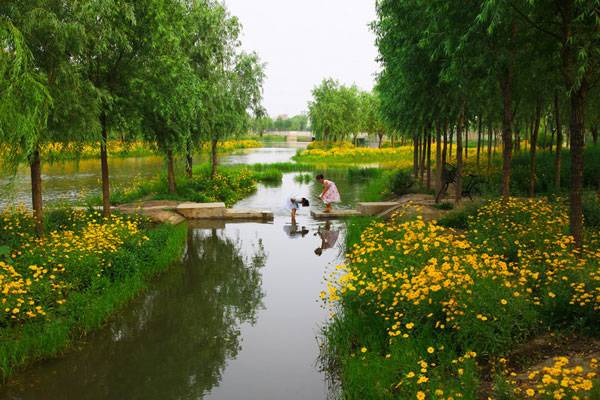 Human Intervention — Always Swinging Between Good and Bad Before presenting the strategies that were chosen for the revival of this forgotten landscape, it is essential to note that the greenway was not always a neglected eyesore. With a length of 13.4 kilometers and a width varying between 100 and 300 meters, the greenway spans the city of Qian’an, covering no less than 135 hectares. The landscape serves a population of 700,000 people, with the city of Qian’an being located at the foot of Yanshan Mountain and on the bank of the beautiful Luan River, in the Hebei Province. 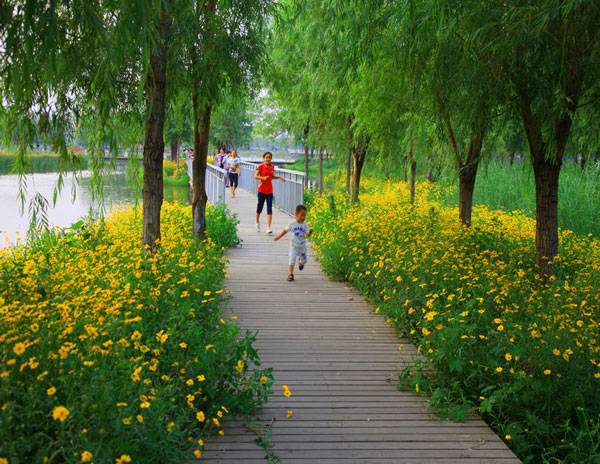 Why did it suffer from pollution? Before the intense industrialization and development of the urban communities prior to the 1970s, the former Sanlihe River was revered for its crystal clear waters. As more and more industries started to develop in the area, attracting urban populations, the river started to suffer from intense pollution, with sewage and waste affecting its quality. The Sanlihe River soon dried up, and its channel was actually blocked due to the increased waste. The design strategies chosen by the creative minds at Turenscape managed to transform a space that was longing for its long-lost charm into an amazing landscape, demonstrating that it is still possible to reverse the effects of misguided human intervention on nature. 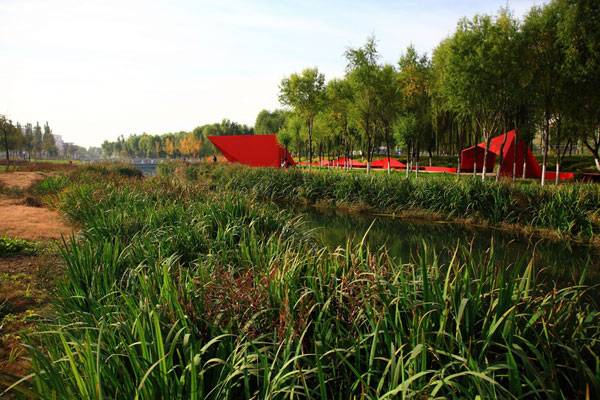 Carefully Chosen Strategies Promote Sustainable Development The recovery of the landscape was based on a number of carefully chosen strategies, including sewage management, ecological restoration, and urban design along the Sanlihe River Greenway. The sewage management was successfully accomplished by a redesign of the sewage pipes. This change allowed for wastewater to be separated from the urban stormwater runoff. And in an effort to maintain the concept of sustainable development, the organic garbage collected from nearby households was used to shape the landforms, while the industrial waste was cleaned from the site and further treated, minimizing its effect on the environment. 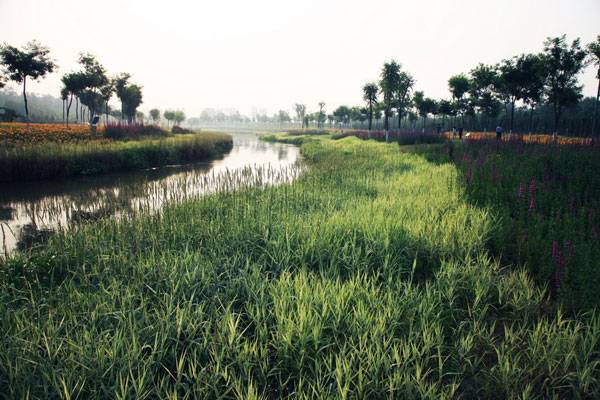 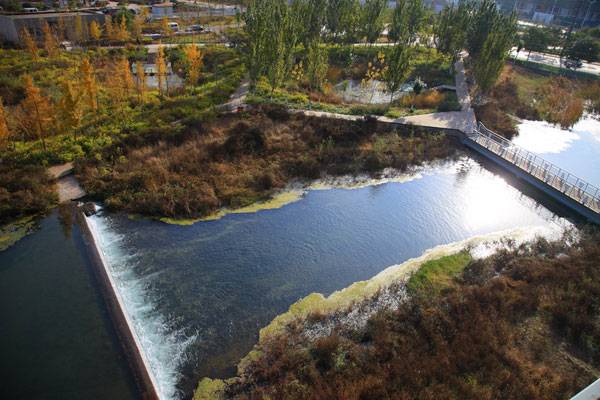 Design with Control In designing the scenic water byway, the designers took advantage of the natural altitude difference between the bed of the Luan River and the city. A fountain was made through a pipe that actually goes through the high embankment, allowing for constant control over the amount of water flowing through. Each element has been ingeniously chosen to guarantee a complete transformation of the landscape. Keeping the Existing Trees As part of the ecological restoration, the concrete channel of the river was removed and a beautiful wetland system was created. This allowed for the existing trees to be kept on site and for the natural wildlife to enjoy newly created habitats. Apart from that, the riverbanks were transformed into elegant tree islands, connected through boardwalks and demonstrating enhanced functionality for residents and tourists. The preservation of the trees minimized construction costs, which is another advantage. 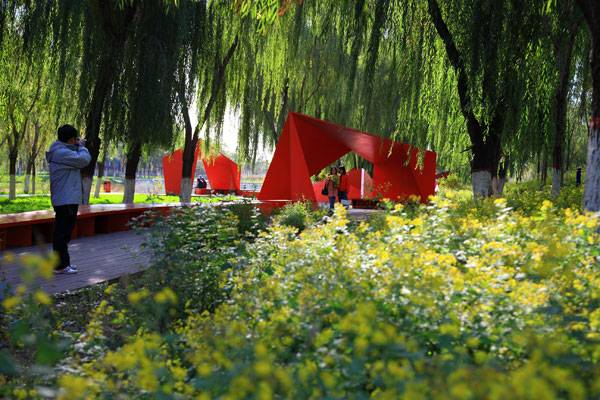 Ecological and Functional This project is a perfect example of how functionality can blend with aesthetics, especially if you take a look at the chosen design strategies. Pedestrian and cycling routes have been positioned along the greenway, increasing the access of local communities to the newly designed space. Low-maintenance vegetation, wetland species, and wildflowers were chosen for the design of the green infrastructure. A beautiful contrast appears between the elements of functionality and the green nature. The elements of art — with a red Folding Paper made from fiberglass as the center of attention — come to complete the already beautiful image of the landscape. 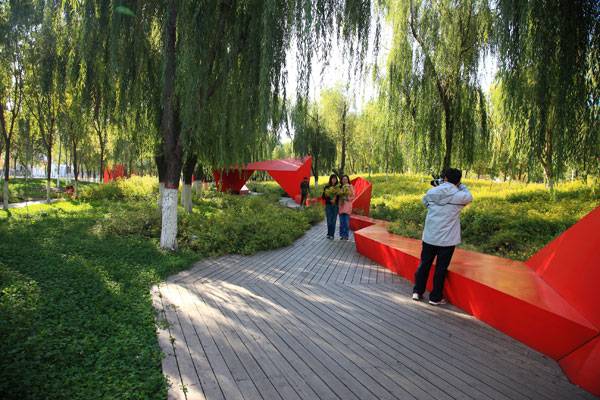 Red Folding Paper: Integration of Art Taken to Perfection Looking at this project, it is amazing to see how art has been integrated into the new landscape. The Red Folding Paper is the main point of attention, demonstrating a perfect choice of material (fiberglass) and an inspired option when it comes to color (Chinese red).

Making the People a Part of Nature The interesting thing is that this 800-meter-long corridor is not only pleasing from an aesthetic point of view, but also highly functional. Throughout its entire length, one can find integrated shelters and seats, as well as a boardwalk and lighting options. 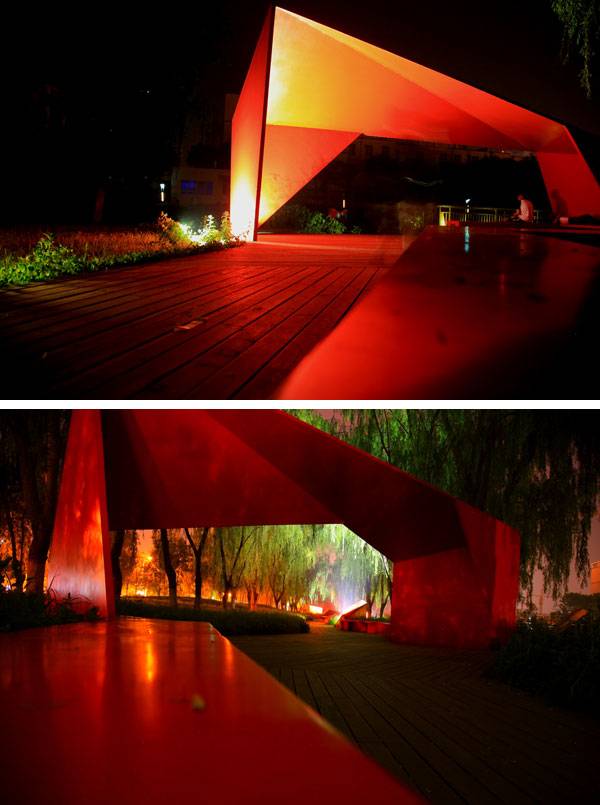 More on The Red Folding Paper Structure In choosing the Red Folding Paper as one of the main elements of this project, the landscape architects have drawn their inspiration from the local folk art of paper cutting. The multiple elements integrated into the Red Folding Paper serve both children and families, providing them with a fun experience. Plus, the bold red color is in perfect contrast with the vegetation, adding to the overall aesthetic effect. The landscape is enriched by this element, demonstrating that local art can definitely be used as a source of inspiration when redesigning a landscape. 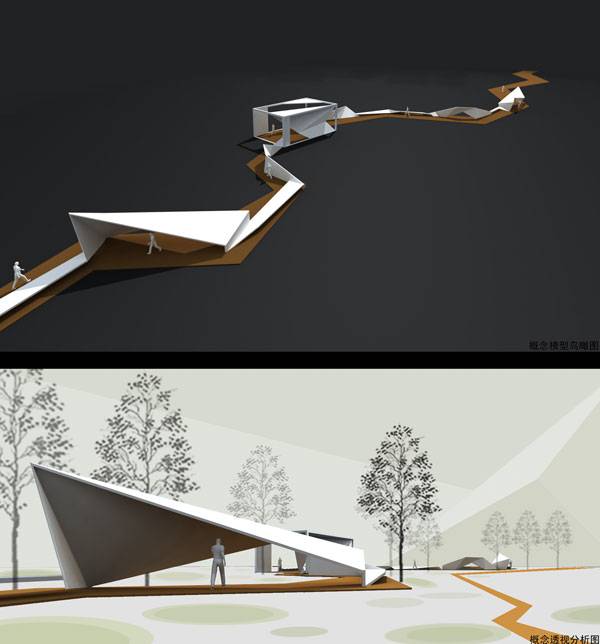 In conclusion, this project serves as a perfect example of how powerful landscape architecture can be in transforming a space, taking it from neglected to extraordinary. After reading all about this amazing rejuvenation of a forgotten landscape, can you name similar projects and tell us why they have left an impression on you?