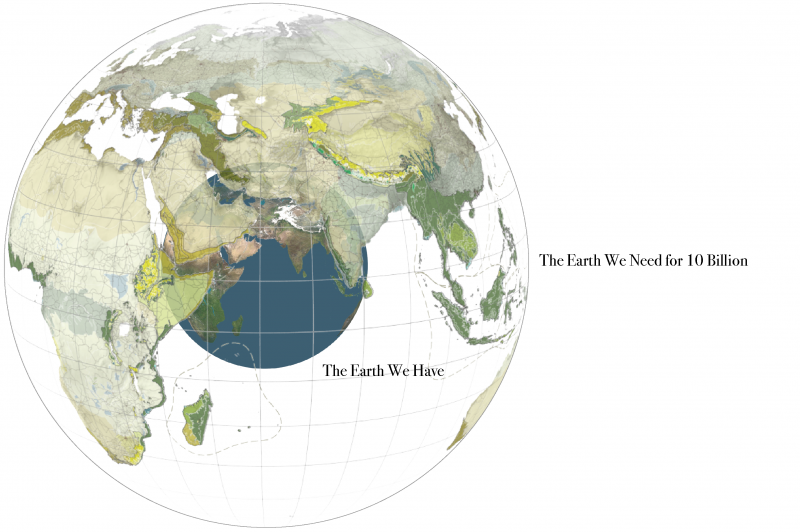 Whilst Weller’s research screams to the viewers of the urgency of a changing world, often it doesn’t become a priority until it becomes critical. [Cue Humanitarianism]. The term “humanitarism” can be as ambiguous as “landscape architecture” because it is perceived to be very broad and difficult to exactly define for many.

The purpose of Humanitarianism is deeply rooted in the following:

Hotspot Cities are cities of 300,000 or more people that are projected to sprawl into remnant habitat in the world’s biological hotspots. © 2017 Richard J. Weller, Claire Hoch, and Chieh Huang, Atlas for the End of the World, http://atlas-for-the-end-of-the-world.com 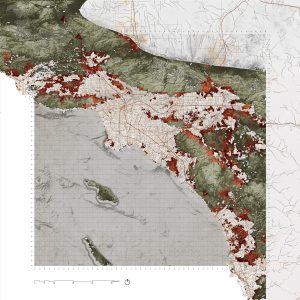 Hotspot City in detail- Los Angeles in US © 2017 Richard J. Weller, Claire Hoch, and Chieh Huang, Atlas for the End of the World, http://atlas-for-the-end-of-the-world.com. 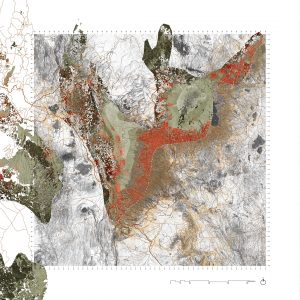 Hotspot City in detail- Nairobi in Kenya © 2017 Richard J. Weller, Claire Hoch, and Chieh Huang, Atlas for the End of the World, http://atlas-for-the-end-of-the-world.com

But why would landscape architects get involved? The Humanitarian Landscape Collective states in their vision statement that landscape architecture has “a professional and moral duty to help vulnerable communities.” Likewise, the Landscape Architecture Foundation (LAF) in their updated Declaration for Concern puts forward that “humanity’s common ground is the landscape itself…that serve a higher purpose of social and ecological justice.” Here comes the moral dilemma – surely, if there is a need to do so as we face rapid urbanization, changing climate, and escalating consumption of Earth’s finite resources, landscape architects should get involved in some capacity?

There is an ongoing discussion, which exists outside of the humanitarian context for the need of landscape architects to help create an alternate future. The point here is the same. LAF comments that most humanitarian work has a spatial aspect that can benefit from a unique perspective of landscape architects as “systems thinkers trained to design for natural resources, natural processes and people.” Public health, environmental psychology, sociology, food systems… these are the few aspects in which landscape plays a part of either the main benefactor, the binding agent, or simply part of the cast in the creation of a holistically functioning environment.

Map showing displacement of people due to conflict © 2017 Richard J. Weller, Claire Hoch, and Chieh Huang, Atlas for the End of the World, http://atlas-for-the-end-of-the-world.com

There are already a bunch of system thinkers sowing the seeds to consider our avenues of assistance. The previously mentioned Humanitarian Landscape Collective, based in London, is currently building knowledge and relationships with other professionals to further identify the role of landscape architects in humanitarian work. The International Federation of Landscape Architects hosts a group called Landscape Architects Without Borders on Facebook that engage in interesting news amongst peers.

Likewise, LAF has seen an increasing interest in international and nonprofit work from students and emerging leaders. Their Olmsted Scholars Program, an annual leadership recognition program for landscape architecture students, has had many humanitarian-focused proposals amongst winners and finalists:

“This year, our graduate National Olmsted Scholar Areti Athanasopoulos and finalist Grace Mitchell Tada each proposed to build on their previous work by investigating and developing frameworks for the design of refugee camp and migrant center landscapes.

In 2018, graduate winner Liz Camuti’s proposal involved researching new forms of socio-ecological infrastructure for isolated populations threatened by climate change and extreme weather, while undergraduate winner Karina Ramos wanted to create a physical plan for the growth and development of an emerging town in Peru to guide the processes of informal urbanization…” (LAF) 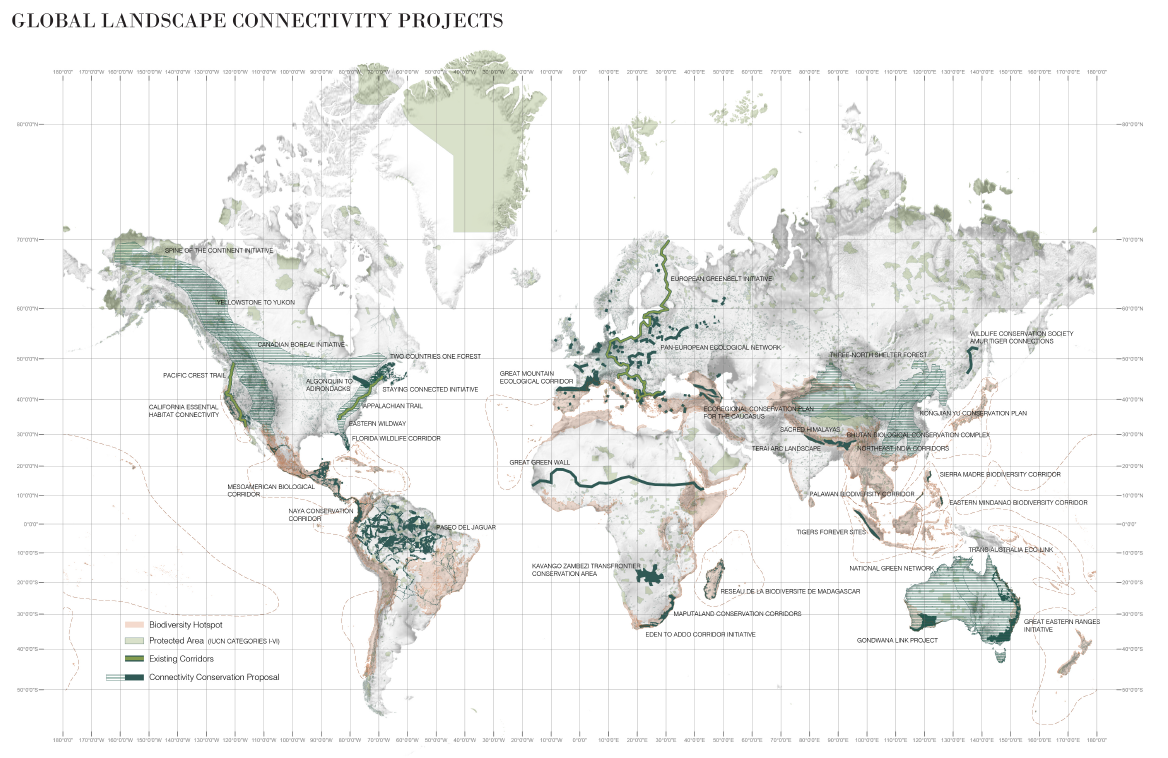 Map shows the proposed and partially constructed large scale landscape connectivity projects across the world, such as restoration, re-wilding projects and provision of public amenity. © 2017 Richard J. Weller, Claire Hoch, and Chieh Huang, Atlas for the End of the World, http://atlas-for-the-end-of-the-world.com.

Their $25,000 Fellowship for Innovation and Leadership has also notably led to start up of non-profit organisation Critical Places, that aims to work with people and governments to address critical issues in India, such as water scarcity and waste management.

Marriage of Humanitarianism and Landscape Architecture

Whilst the seed sowers continue to explore and re-define the parallel vagueness of language that exist when landscape architecture and humanitarianism come together, they are going to come to face the inevitable challenges.

LAF points out that the holistic nature of landscape architecture approach might be at odds with how humanitarian work is done, which is a reactionary response to a crisis to address human needs as quickly and efficiently as possible. Thus the long-term impacts and ecological needs can get lost in this scramble:

“The different power actors, goals, and funding sources are commonly isolated, which makes it difficult to address issues in a holistic manner. This is an enormous challenge, but may be all the more reason why landscape architects should get involved.” (LAF)

We once discovered that the world was not flat, and with Weller’s cartology, another revelation is created of the world’s current land use and urbanisation situation. It does feel as though landscape architects are starting to deal with the crisis, creating commotions, and achieving collaborations. And the collaboration really extends to creating relationships with the people that need it during the crisis, to maintain, if not, bring back their human dignity over the course that the crisis occurs.

The inevitable challenges are also deeply rooted in the moral dilemma we face and as such, asking ourselves for the reason of getting involved. Whilst landscape architects as “system thinkers” have the prerequisite skills, humanitarian work isn’t about creating a ministry of do-gooders for welfare and social change. It’s about creating an ecosystem that capitalises on the idealists and campaigners who want to help without building a culture of individual saviourism.

Map indicates location of landscape architectural education programs and big international non-government organisations in the world. It shows that global conservation movement has established evenly in the manner that landscape architecture has not – there is a disconnection between where the subject is taught and where it is most needed from a biodiversity perspective. © 2017 Richard J. Weller, Claire Hoch, and Chieh Huang, Atlas for the End of the World, http://atlas-for-the-end-of-the-world.com.

We would be interested to hear your thoughts – do you think there is scope for landscape architects to be involved in this type of work? What aspects should be given the most efforts? Where do you see any challenges arising as the profession gets involved?

Win Phyo
Win is a chartered Landscape Architect, currently working with Greenhalgh Landscape Architecture, in the historic City of Bath. She is refining her craft in the profession through different platforms, including being a landscape writer for over seven years. She's the host and creator of Thitpin Podcast, which explores the intersections of landscape with culture, identity, well-being, design and many more - to represent the diverse connections of the profession. The podcast can be found on iTunes and other podcast listening apps. Follow @thitpinpodcast on Instagram for further engagement!