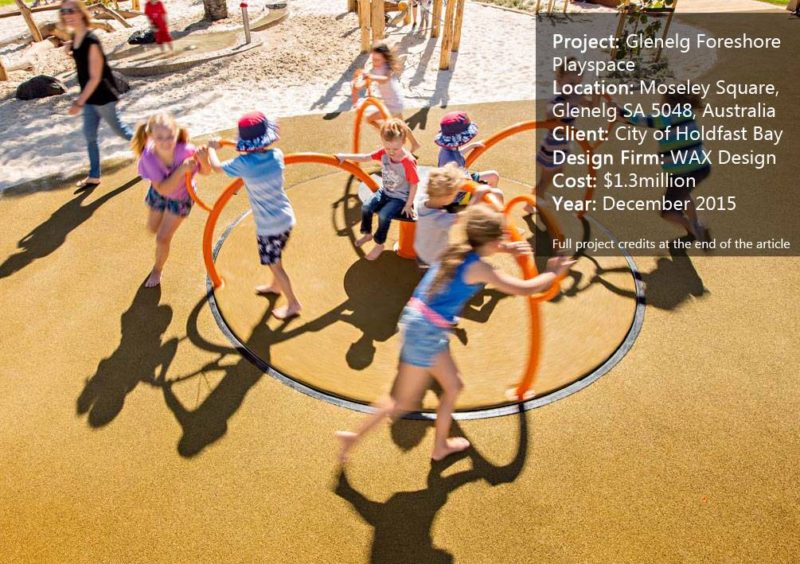 Article by Win Phyo – A full review of Glenelg Foreshore Playspace , by WAX Design, in Glenelg, South Australia.  Playgrounds have the potential to be magical and exciting places for children. In fact, earlier this year, we featured some of the best playgrounds in the world, which shows that the standards of play for children have evolved over the 21st century and continue to do so. Nobody quite knows what the perfect formula is but we are getting closer. Glenelg Foreshore Playspace, in our opinion, has got it right. You see, research is revealing that risk in play has proven to be a beneficial thing as children get to learn about their own competence. Hence natural play has been getting popular amongst parents. However, to develop this concept further, one has to think about other factors such as inclusiveness or an imaginative concept. Furthermore, what about sourcing renewable materials for the play equipment… or community engagement? With all these things in mind and more, Glenelg Foreshore Playspace is very iconic – read on to find out why it would be hard to top this level of design integrity. 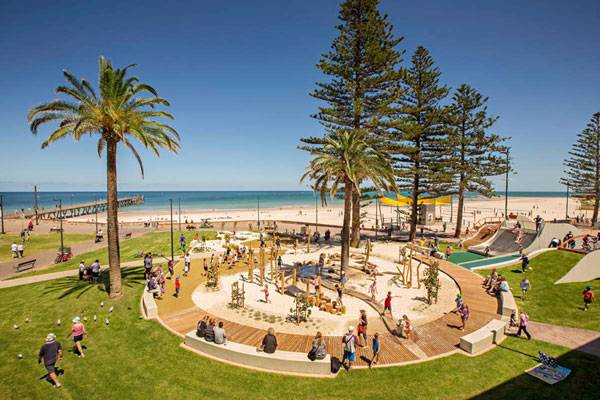 From a tunnel that becomes a giant sandcastle for children to explore, to the brightly coloured dome net which is an abstracted form of a draping beach towel, there are no shortage of imaginative fixtures in this project. It is quite clear that WAX Design has thought long and hard about the concept. The design takes inspiration from the surrounding landscape, elements of a beach setting, and the history and culture of Glenelg Foreshore. 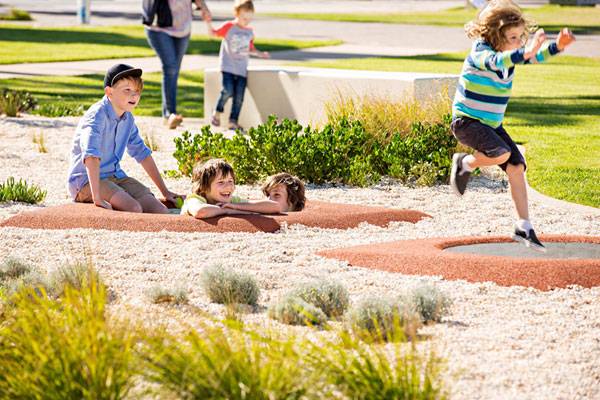 Coastal references of the natural waves’ motion and erosion process are reflected in the materiality of the precast blade walls, which also includes a challenging, giant 4m-wide slide, climbing walls, and the tunnel matrix. The intertidal nature of the mangroves in the region is reflected through the tactile and sensory play of the sandpit, which features interactive water play and timber log climbs. 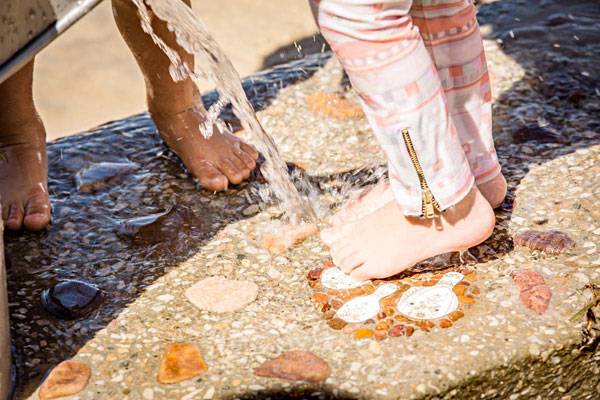 The structure and aerial roots of mangroves are also reflected in the custom timber log climb, rope balance, and boardwalk. The play area is also extended around the foreshore with a carousel, hammock, in-ground trampolines, and sunken hides surrounded by coastal plantings and shade trees.

Healthy Measure of Risk and Inclusiveness

The beach is their adventure and a place for children to call theirs; Glenelg Foreshore Playspace wants them to know that. The design promotes principles of natural play and risk-benefit opportunities for children of all abilities, which means they include spaces for children with physical, cognitive, sensory, and intellectual disabilities. 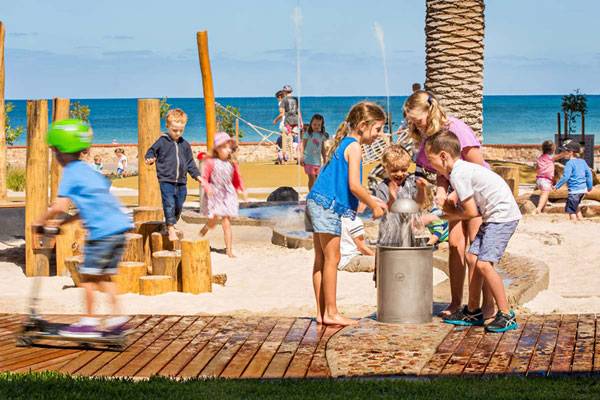 They did not forget the fundamental long-term goals of sustainable design either. The softscape strategy is particularly valid. All the existing trees were retained and additional ones were planted to provide even more shade for children. Native plants were also used to increase the biodiversity within the area. What’s more, for the first time in South Australia, “Living Soft-Fall Turf” has been prototyped. This invention ensures a higher standard of wear and compaction in playgrounds and the provision of a safe falling surface. Play elements are featured with renewable materials. Timber and rope has been prioritized over steel and plastic and a high proportion of equipment is custom-designed between WAX and local makers. This results in authentic and unique play equipment. 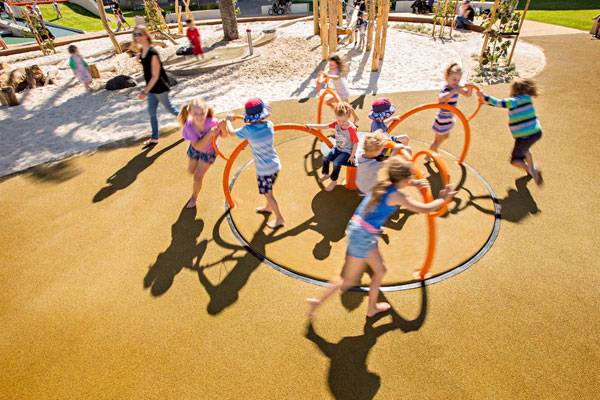 Involving Community Right from the Start

One of the most successful aspects of this project is its constant engagement process with the community. WAX has consulted with the children in particular and has allowed their ideas to influence the design decisions. Consultations were executed in “Family Fun Day” format by using cognitive mapping and a voting system to distinguish popular ideas and aspirations. They also involved the Council to give further feedback, which strengthened the whole project. The inclusiveness translated in this way allows people of all backgrounds to respect the space as a place of congregation, regardless of social and economic factors. 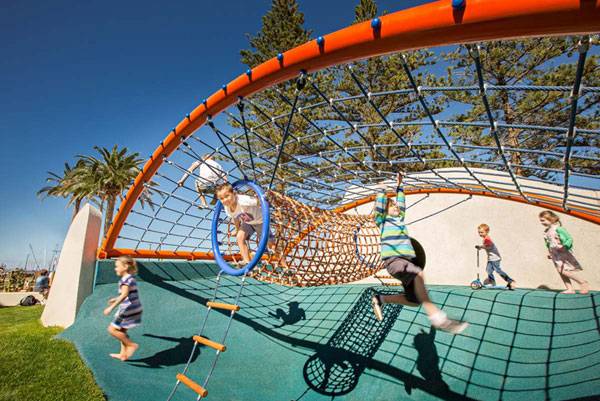 Obviously, when the children are happy, the adults are too! Hence, the playspace has become a valuable asset – making it a play destination in South Australia, boosting the surrounding commercial areas, and increasing tourism. The success can also be measured by numbers of two-hundred-plus children and adults who constantly visit, since the opening in January 2016. Do you have any playground projects in mind that can top this project? 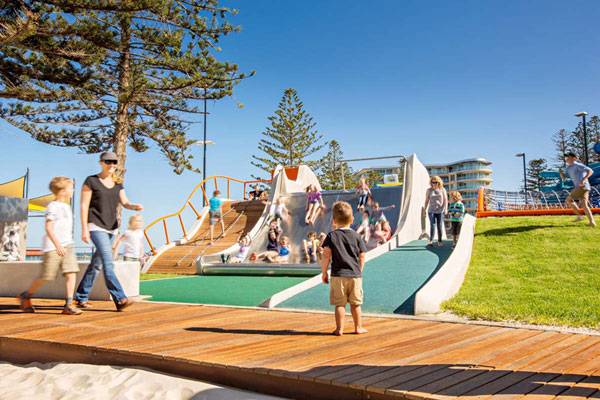