Nelson Mandelapark, by Mecanoo in Bijlmermeer, Amsterdam. With intensification in cities around the globe, more and more people are living in apartments with little access to private green space. As a result, community parks are taking on an increasingly important role in communities, acting as an extension of people’s living spaces.

Nelson Mandelapark is a large, 32-hectare recreational park complex designed by the multi-disciplinary Dutch firm Mecanoo. The park is located in the Bijlmermeer neighborhood of Zuidoost, Amsterdam.

Originally named Bijlmerpark, the park was renamed Nelson Mandelapark in 2014 to honor the former South African president after his death and to recognize his unique connection with Amsterdam. Completed in 2011, the park offers a wide variety of recreation facilities, containing more than eight hectares of sports fields alone. The project also includes the design of a multi-use community, including 700 homes, office space, and even a school. 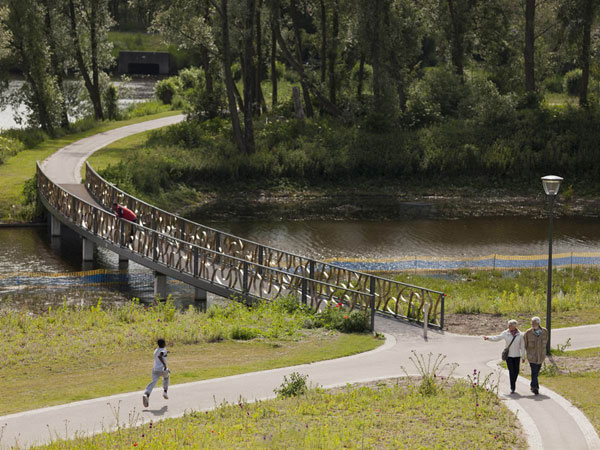 Understanding Context: The Urban Renewal of Bijlmermeer Bijlmermeer is a neighborhood in the borough of Zuidoost, designed and built during the 1960s and 1970s to accommodate growth in the city. Designed in the typical utopian modernist style of the time, the neighborhood is characterized by the collection of nearly identical mid- and high-rise apartment buildings surrounded by large swaths of open space.

The neighborhood incorporates a high proportion of low-cost and social housing. As a result, the neighborhood is extremely diverse, and houses many immigrant and low-income families. A Hotbed of Crime However, the resulting concentration of poverty, combined with poor urban design, contributed to the creation of a hotbed for crime. Then in 1992, a devastating aviation accident occurred in the neighborhood, destroying hundreds of homes and killing at least 43 people.

This tragedy ended up being the catalyst for a revitalization of the entire neighborhood. Since the accident, the local government has been working hard to re-brand the neighborhood, redesigning and rebuilding housing and public space in order to improve the urban quality and safety of the neighborhood. Home to the AFC Ajax Amsterdam ArenA Today, the area is increasingly vibrant and attractive to developers, and is home to the AFC Ajax Amsterdam ArenA football stadium, as well as Amsterdam’s largest shopping center. 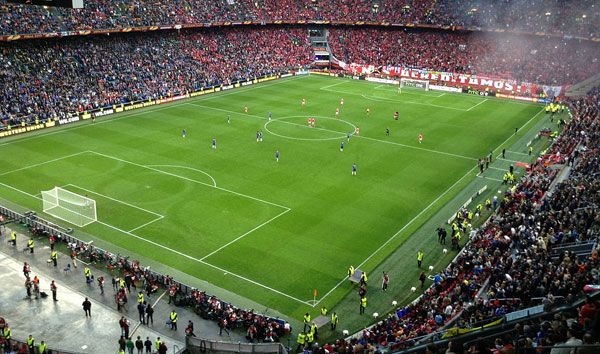 The Design of Nelson Mandelapark

The redevelopment of the neighborhood’s extensive parklands was a keystone project in the re-branding. Nelson Mandelapark aimed to meet the present and future needs of people living in the neighborhood. Located in such a diverse population, it was necessary for the new design to create a wide variety of recreational opportunities and programming. Luckily, designers had ample space to work with. Diverse Programming for a Diverse Population The new park has seven main entrances, each marked with a distinctive iron gateway that allows the park to be closed at nighttime. The park has an extensive network of pathways, winding through gentle hills and wetlands. With bikes being so ubiquitous to Dutch life, the park is the perfect place for a relaxing bike ride. Other Articles Showcasing Projects by Mecanoo: 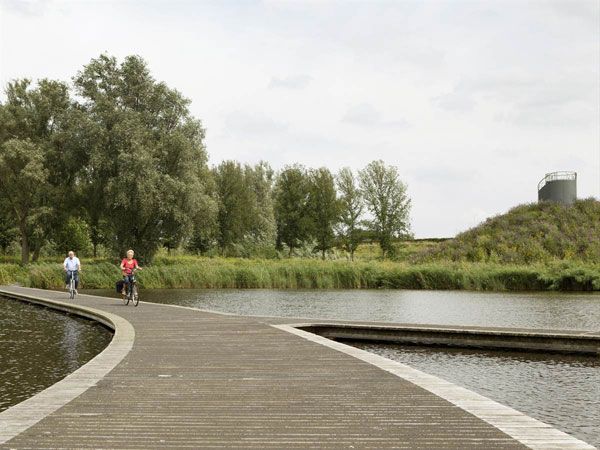 Several sports fields are located centrally in the park, including football fields, a handball court, and a track. The park features a unique, custom playground and a skate park area designed by Carve. Constructed in bold colors with playful shapes, this playground area provides challenges for a variety of ages and includes unique features, such as rope obstacles and a water play area. 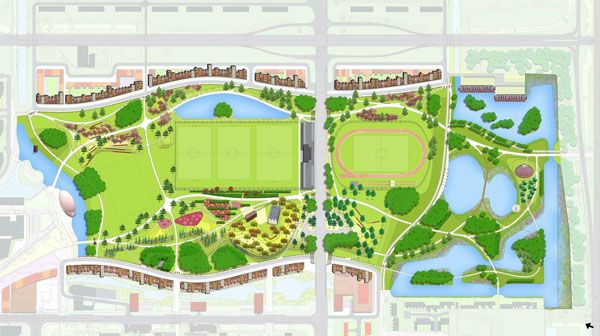 The park also offers opportunities for more passive recreation, with more naturalized waterfront areas. The park’s planting scheme is specially adapted to the Dutch landscape, focused on wetland species that tolerate flooding and species that attract butterflies and other wildlife. 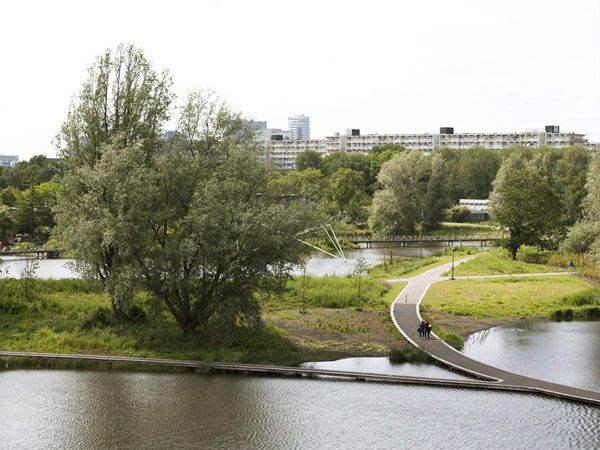 Along the edges of the park, new homes and offices create a more vibrant street life. It is hoped that these homes will help to attract more higher-income families into the neighborhood, to create a more balanced demographic. The new design manages to bring renewed life into the neighborhood while still respecting the historic diversity and modernist architectural style that characterizes the area. 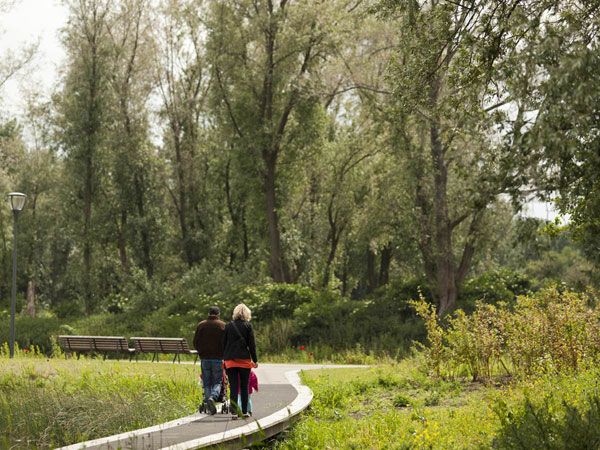 Amsterdam’s New Outdoor Living Room Nelson Mandelapark acts as a community center for the diverse and vibrant Bijlmermeer neighborhood. It offers a wide variety of recreational opportunities for all ages, while enhancing both the natural and urban environment. In Bijlmermeer, almost all of the residents live in small apartments without access to green space, so the park plays an especially important role in building community and improving residents’ quality of life. But, above all, the park has allowed for the expansion of residents’ living space, creating an outdoor living room for the community. Recommended Reading: