Permeable pavements are a great tool for alleviating stormwater issues.  Proper design—like with most landscape technologies—is key to their success.  Yet as these installations age, they clog and no longer perform as designed.  If infiltration cannot be restored through normal means, the pavement must be totally reconstructed.  Does this issue mean that landscape architects been over-eager in using permeable pavement as a solution for stormwater management? 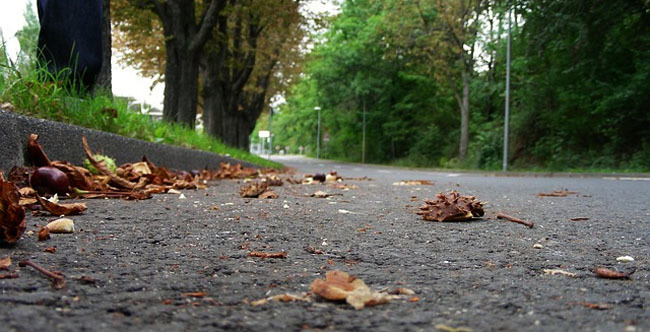 Debris like leaf litter can build up annually and reduce the infiltration rates of pervious paving. Image credit: BigBlockBobber, pixabay.com

Landscape architects have long understood the need to maintain permeable pavements to sustain performance levels and have been talking about maintenance routines almost since they were first used.  Surface clogging that occurs through leaf litter, mulch, soil, sand, and other debris can be prevented with a little client and laborer education and simple, routine maintenance.  Typically, a simple vacuum cleaning once or more per year is adequate to prevent any significant performance decreases due to large debris.  Even with basic maintenance, clogging does naturally occur as sediment is carried with stormwater into the porous surface. 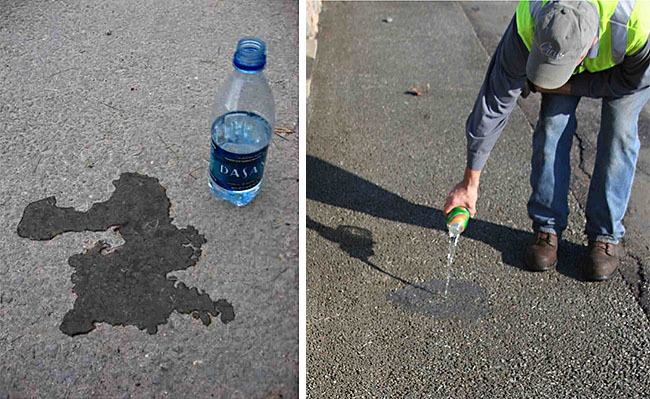 This pervious concrete installation in Kennekee Beach, Maine, was clogged because it was designed in a depression and as a result quickly collected sand and other sediment.  Restorative cleaning through vacuuming re-established infiltration. Image credit: Bruce Ferguson

Permeable pavements are designed to have incredibly high baseline infiltration rates.  The generally accepted industry standard is 100 inches/hr.  Even a high intensity storm cannot produce nearly enough water to supersede these rates.  Because of this, reduced infiltration rates initially are not an issue.

For example, let’s look at a hundred-year, one-hour rainstorm event in Chicago.  This storm has an estimated rainfall depth of 3.04 inches.  Even though micro-burst storms will have a greater intensity than a one-hour storm, a one-hour storm is a good indicator of infiltration capability.  A rainfall event would have to exceed the hundred-year storm depth by 3290% for it to overwhelm the pavers’ capability.  The surface infiltration rates can be reduced by a factor of nearly 30 before a high rainfall event would exceed its capability.   A major caveat in this example is that it assumes the permeable pavement does not receive runoff from a larger catchment area.   If it does, the rainfall depth effectively is multiplied by a factor of the area of total watershed to permeable surface.  Nonetheless, at peak performance, it is far more likely that the sub-base detention will flood than the surface will fail to handle runoff. 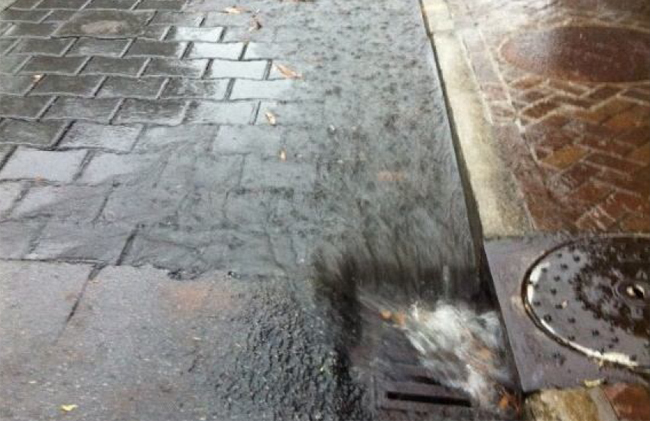 This pavement was part of the study by the University of Louisville.  In this case, the pavers are not clogged. Rather, the problem is that the sub-base is flooded. Image credit: Un. of Louisville Center for Infrastructure Research

Eventually, sediment does reduce infiltration rates to the point which the permeable surface does not function properly.  Depending on site factors like traffic, winter care, and routine maintenance, restorative cleaning may be needed anywhere from as infrequently as once every twenty years to as frequently as once a year.  In most cases, it will likely be needed once every few years.  The best option is to have the infiltration tested once a year after the initial routine maintenance in the spring.

While many methods of restorative maintenance exist, using proven, effective methods is important.  Sediment usually gets trapped in the first half inch to inch of jointing material.  Some recommended methods can actually drive sediment layer deeper than that, permanently reducing infiltration rates.  A white paper published by Elgin Sweeper Company showed that using a regenerative air sweeper on a regular basis and using a high power vacuum are among the more effective methods to restore infiltration rates.  A recent study from the University of Louisville Center for Infrastructure Research also demonstrated that using a high powered vacuum head was consistently effective in restoring infiltration rates in permeable pavers.  The study showed that a simple vacuum/sweeping machine is ineffective and that repeated treatments with power washers became gradually less effective, and additionally has the potential to drive sediment deeper into the aggregate or paving. 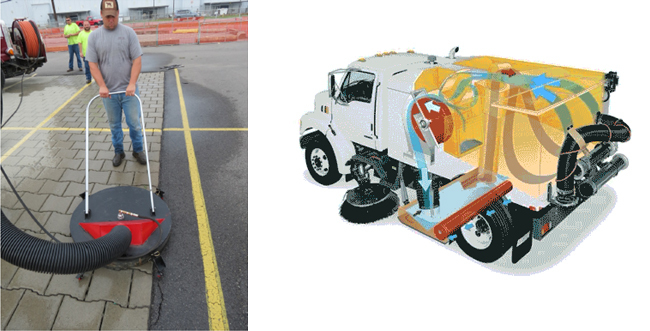 LEFT: A high power vacuum head by PaveDrain featured in the study by the University of St. Louis. Image credit: Un. of Louisville Center for Infrastructure Research.   RIGHT: A cross-section of a regenerative air sweeper. Image credit: Elgin Sweeper Company 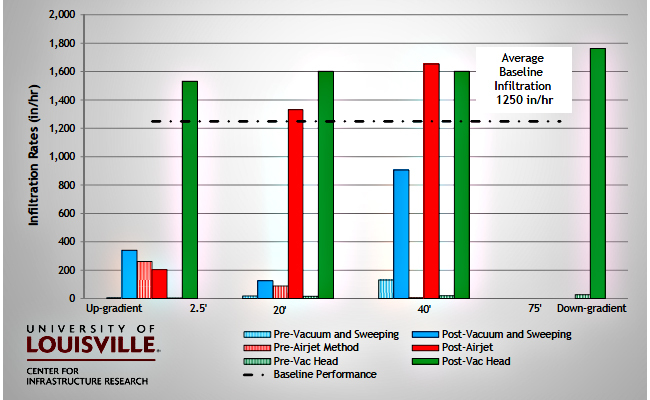 The graph shows the restoration of infiltration rates along several points in the test Pave-Drain pavement through different methods.  The vac-head method was the only one proved to be consistently effective. Image credit: Un. of Louisville Center for Infrastructure Research

Maintenance aside, does choice of paving material affect long term performance?  An interview Bruce Ferguson, FASLA—one of the leading experts in permeable pavement—shed some light on the topic.

Throughout the conversation, proper siting and design were continual themes.  Overall, he held the long term success of permeable paving in a positive light.  He asserted that with regular maintenance most permeable installations will not become so clogged as to necessitate total reconstruction.  Throughout his experience, the only installations he has seen clogged beyond repair are porous concrete and asphalt.  He explained that this can happen because the initial mix is poor, or with asphalt, the binding oil shifts over time and the pavement clogs itself.

For turf grid systems, Ferguson’s experience indicates that they work only where traffic is limited.  With them, the grass is often still not as well protected as it needs to be, resulting in compacted soil and an un-vegetated surface.  Although many of the leading pavement types are viable with proper design, permeable pavers seem to be the most reliable material in the permeable pavement market at this point in time.

All permeable pavements face issues with clogging to some degree, an inherit weakness caused in infiltrating water.  With a proper maintenance schedule, however, most of the difficulties with long term performance can be eliminated.  The paving material itself can also make a huge difference.   Proper siting, design, and maintenance are needed for permeable paving to be an effective stormwater management tool, but the same caution should be taken with all performance-based design.

Thanks to Bruce Ferguson, Dan Salsinger, ICPI, and the University of Louisville Center for Infrastructure Research for their contribution of knowledge.