If you’re looking to brush up your drawing skills, you’ll want to check out Land8 member Gašper Habjanič’s excellent Linescapes video series. With a knack for both sketching and teaching, this Slovenian landscape architecture student started filming these short, inspiring tutorials on a semi-weekly basis since last summer. Armed with a pen, a sketchpad, and a set of watercolors, he captures the spirit of the various landscapes around Ljubljana as well as the other European places he visits on his travels. Recently, I had the opportunity to chat with Gašper for some behind-the-scenes insight on Linescapes. 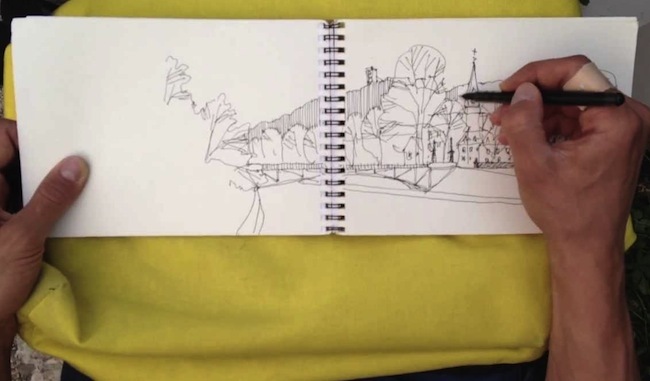 Can you tell me a little bit about your background, are you a student or working professional?

What inspired you to do Linescapes? Where did you learn to draw?

The biggest reason is that I just really like drawing. I started to learn when I did my bachelor’s in landscape architecture in Ljubljana, Slovenia; there were a lot of hand drawing courses there. The professors were really good; they taught us how to analyze the landscape through drawing, which is a process that I think is more interesting than just drawing or painting.

The professors taught me to put my camera away and use my sketchbook. I posted some sketches onto LAN’s Sketchy Saturday series but then decided last summer that I also wanted to make videos to show people the drawing process. It was my first time doing something like this and it was really exciting when I got the first views and feedback to my videos.

Where do you get inspiration for your drawing style?

I think this kind of analytical drawing is still pretty rare. I noticed that not many people see drawing as analysis. But I am looking for people with similar thinking and I’ve also started collecting similar artwork on Pinterest.

I’ve also been inspired by other analytical drawings from the field of geography. It’s related to landscape architecture and even though the emphasis is not on drawing skills, the idea behind it is the same: to analyze the landscape through drawing. 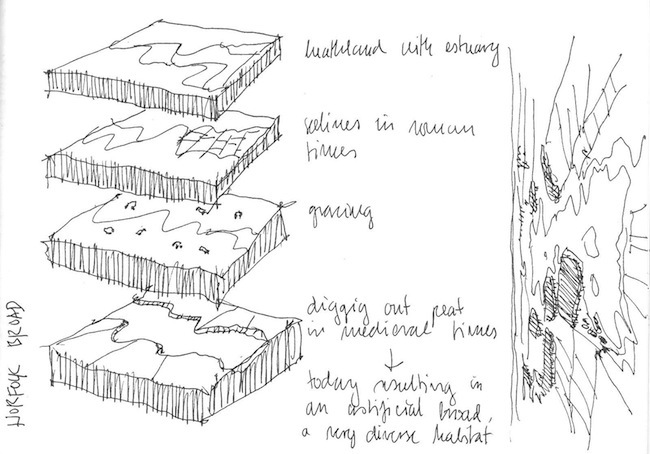 Can you describe how you set up your camera for filming?

It’s very improvised. I film with an iPhone attached to a piece of cardboard and a tripod. Then I position my sketchbook underneath the camera and double-check that it’s in the frame.

There have been many times when I finish filming that I find out the videos out of focus, so it can sometimes take two to three tries to get the final take. Sometimes the wind tips over my tripod or someone interrupts me in the middle of filming.

You’ve got quite the following since your launch last year. What’s the feedback been like to Linescapes?

I’ve been surprised by the feedback–it’s been great! I never thought that so many people would appreciate my videos. Many people have thanked me for the videos and I hope it encourages more people to draw. This one professor in Nitra, Slovakia even contacted me to let me know that he’s been showing my videos to his students every week.

People have also asked for specific videos, such as a tutorial on drawing trees, and I think I’ll be making a video on what types of pen and paper to use. I encourage people to write to me on Facebook or email me their requests and their sketches. I’d like to make a photo album of sketches people submit to Linescapes.

What are your future plans for Linescapes?

One of my big plans would be to showcase not only my own drawings, but the drawings of other people. I view sketches as a recording of your thoughts at a certain time. In the future, I would like to contact people whose drawings I like and ask them to record videos of their drawing methods as well as get their perspectives on drawings. I’d ask them to share their story and tell a little bit about what drawing means for them and how it fits into their design process.

For the short-term, I think I might include a Digital Drawing Month or some kind of theme that shows off drawing methods other than hand drawing.

Other than Land8 and YouTube, where else can people find you?

What advice do you have for others hoping to improve their drawing skills?

My biggest piece of advice: Don’t be afraid of paper. Grab a pen and paper–it doesn’t matter what kind–and start recording your thoughts with a sketch. Sketches are graphical recordings of our thoughts, which means they don’t have to look good, they’re just meant as a reminder of a place or to capture your thoughts at a certain time. I think people should think of drawing as something personal and for themselves. Just don’t be afraid of paper–that’s the main thing.

Thank you Gašper for sharing your thoughts, sketches, and tutorials with Land8! You can check out his Linescapes videos posted in Land8’s video section or on his Youtube channel.