One Central Park, by ASPECT | OCULUS, in Sydney, Australia. One Central Park is an urban infill redevelopment in Sydney, Australia. Two mixed-use towers composed of residential, commercial, and retail units stand on the former Carlton and United Brewery site. The walls were designed by French artist and botanist Patrick Blanc. The award-winning planting design was done by ASPECT | OCULUS and uses 250 species of native Australian plants. The plants were carefully selected using scientific modeling techniques. To the north lies Sydney’s skyline and spectacular harbor; to the south many of the city’s sprawling suburbs. The towers, bordered by Broadway and Abercrombie streets in Chippendale, stand between Sydney’s central business district and its sprawling suburbs. Due to their unique façades, the buildings also metaphorically stand at the intersection of architecture and landscape architecture. 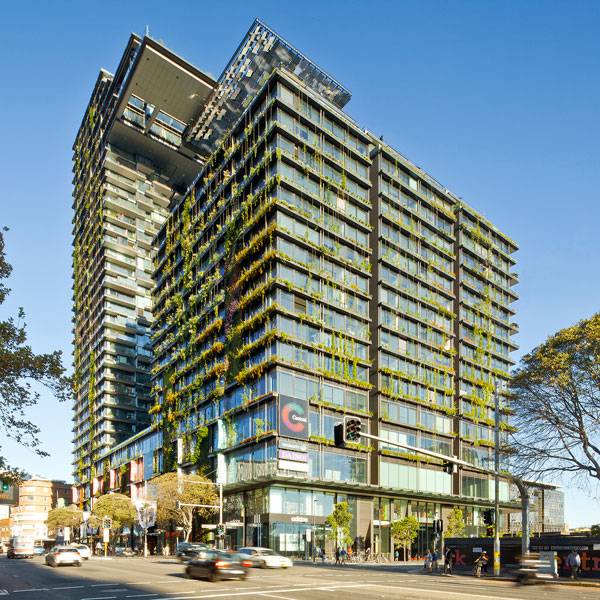 Each residence and wall incorporates a green façade that, with a total area of 1,200 square meters, is said to be the largest en-mass vertical garden in the world. The development also boasts a Skygarden, internal planting, podium gardens, and a sunken courtyard. [contextly_sidebar id=”XqgqjKWXhcUqoCFUF8cyyonPlM7ZwPo6″] Integrating Plants and Water with Built Form ASPECT Studios promotes the practice of “living architecture”, which integrates plants and water with built form. For this project, this is achieved through the use of green roofs, facades, and walls. Living architecture is increasingly being recognized in Australia as a means of responding to climate change and dealing with the scarcity of water and energy. The “heat island effect”, in which the overall temperature of an area is increased through heat storage by buildings and road surfaces, has been identified as a growing problem in Sydney. Integrating living vegetation with buildings alleviates this problem. Other key benefits of living architecture include improvement in thermal performance of buildings, regulation of stormwater impacts, water recycling, and increased urban biodiversity. 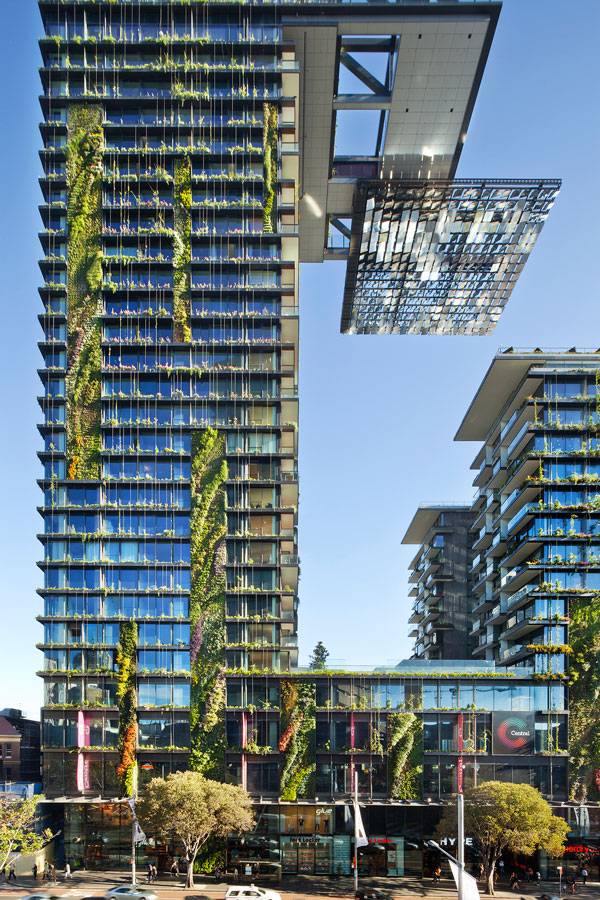 Plants Without Soil Extend the Park to the Top of the Building The whole precinct includes Chippendale Green, covering 6,400 square meters of new public space. The surrounding site integrates heritage buildings, community facilities, and public artwork. It also hosts markets and music festivals and is a popular place for visitors to cycle through, dine, meet, and relax. Jean Nouvel, one of the architects of the building, said of this project: “Landscape is architecture. Here we have created a continuity so the facades extend the park into the sky.” 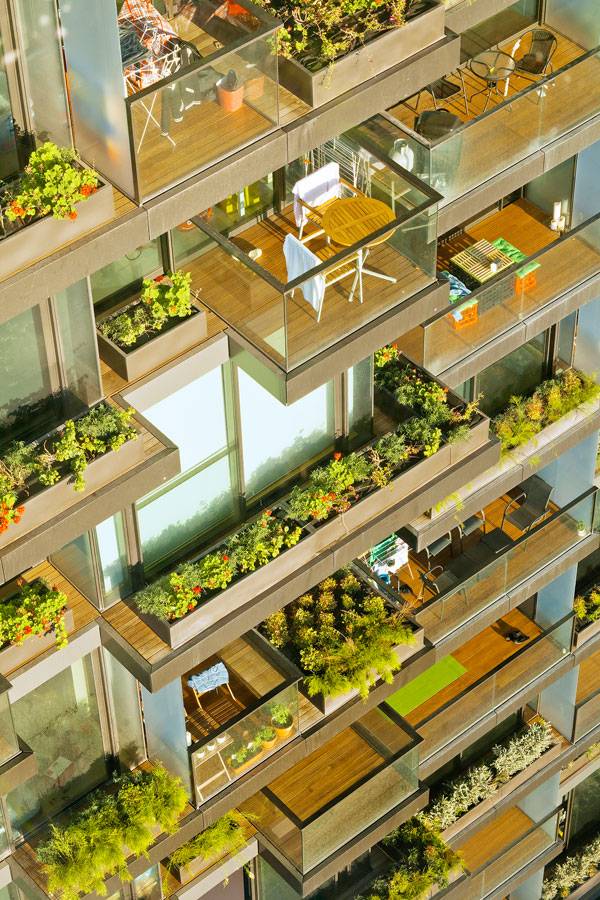 Treehouse Retreat Sure enough, the public park climbs the side of the buildings to form a lush canopy. The towers are wrapped with thousands of indigenous and exotic plants, giving the residences a treehouse retreat-type atmosphere. Instead of soil, the plants of the green façade are sustained by a hydroponic system in which the plants attach themselves to steel wires and planter boxes, each of which contains its own irrigation system from recycled black water. 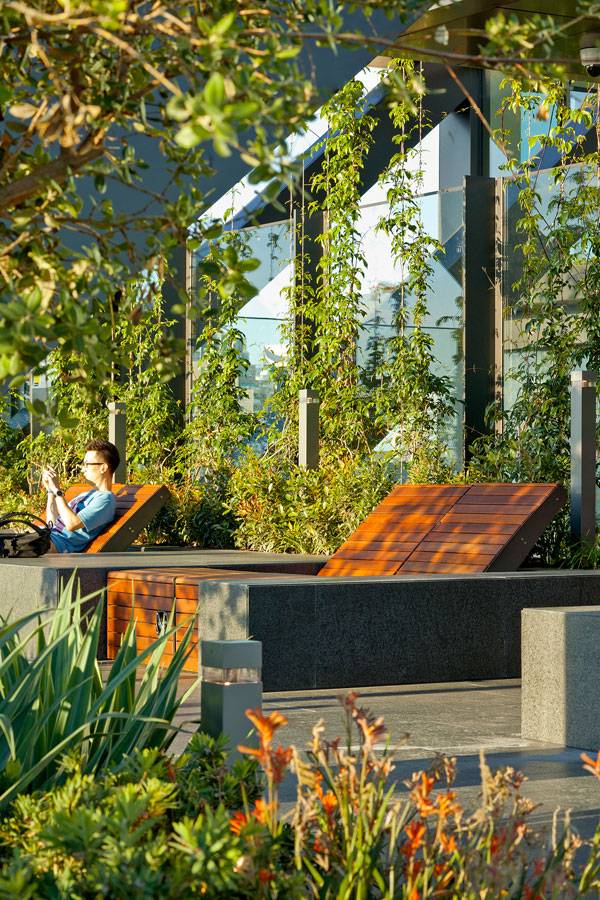 Project Defies Early Skepticism Light, carbon dioxide, water, and nutrients are all mechanically dispersed to the plants. Despite some early skepticism by members of the public, the plants have already survived two summers and have a powerful visual impact. 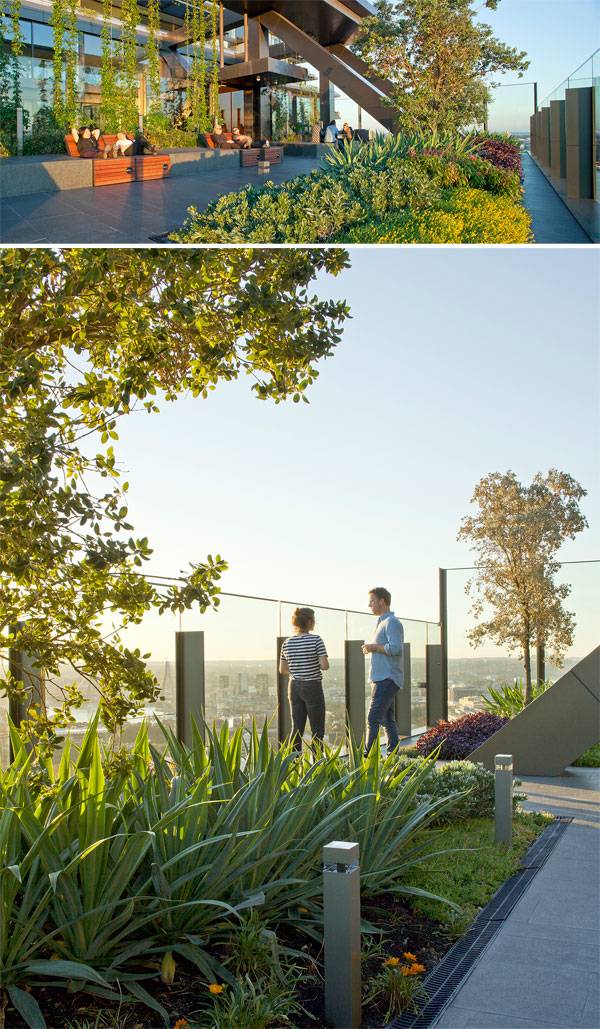 Unique Skygarden Frames the Skyline with Plants A defining feature of the development is a cantilever, known as “The Skygarden”, that extends over 40 meters from the building at 100 meters in the air from the taller East tower. As the name suggests, the Skygarden includes a terraced garden that connects the tower with the parklands beyond, thus helping to bring nature into the city. The First of its Kind Used in Australia This feature was incorporated to alleviate concerns of the towers overshadowing the areas below. The cantilever supports a light-reflecting heliostat system, the first of its kind in Australia used in a residential context and the largest of its type used in an urban environment anywhere in the world. At night, it is illuminated by soft LED lights, another unusual feature of the building. 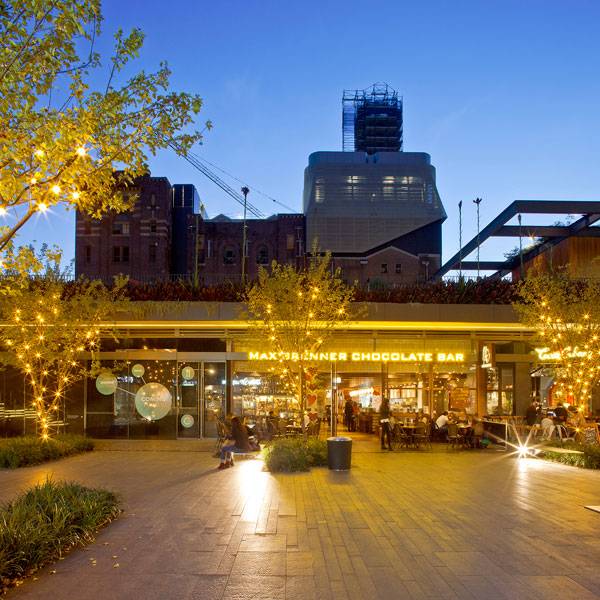 The Heliostat in Action The heliostat redirects sunlight onto overshadowed areas that the sun’s rays don’t reach. Forty sun-tracking heliostat mirrors on the roof of the West tower’s lower level direct light up to the 320 mirrors on the cantilever, which then re-direct sunlight down to the pool and recreation area and through the atrium roof of the shopping area. 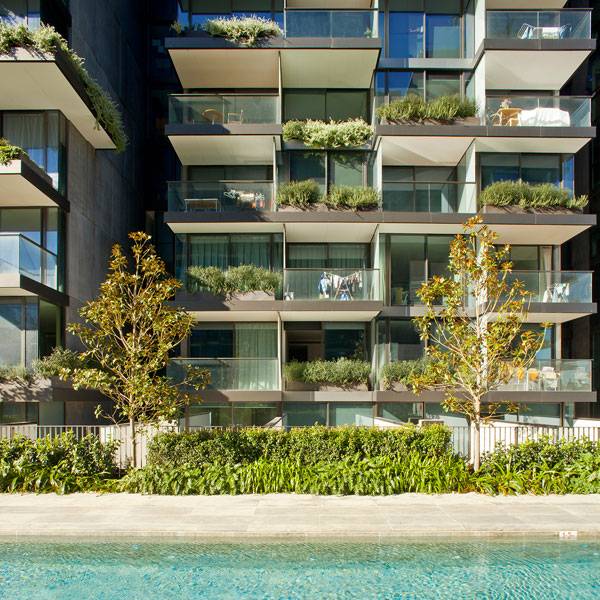 Serving as an Inspiration to the Industry One Central Park stands not just at the boundary of the city center, but also at the boundary of possibility. The project was funded entirely on a commercial basis and could serve as an inspiration to the industry about the viability of similar projects.Hydroponics brings the jungle to the concrete towers, and previously shady parts of the development are lit by heliostats, thereby improving the quality of life of the residents and visitors alike. As children, many of us dream about living in treehouses. How many city slickers could resist living and working in a treehouse-like atmosphere somewhere up in the sky? 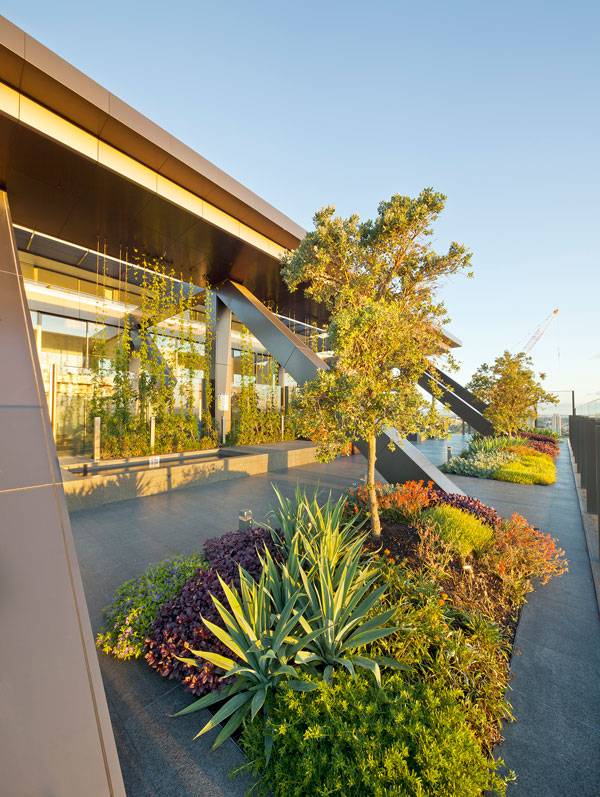