The Pool at Pyne by TROP Terrain+Openspace Monotony and lack of inspiration are problems faced by even the greatest of designers. So in 2010, when designer Pok Kobkongsanti of T.R.O.P. Terrain + Openspace was faced with creating another “Sky Pool” in Bangkok, he decided to look up for inspiration. The pool at the Pyne by Sansari is an artistic expression that proves that designers are not limited to the ground plane. Sometimes, the best real estate for design is located above, not below. The Pyne by Sansiri is a high-end condominium in Bangkok, centrally located in a busy urban district within walking distance of the city’s largest shopping centers. 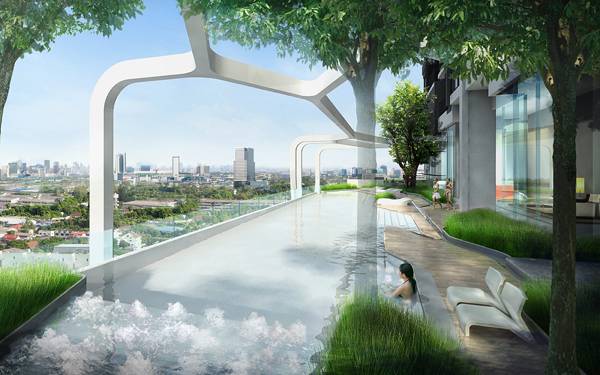 Like most other condominiums in Bangkok, the residential tower is constructed on top of the parking garage, which has a larger floor plan than the actual tower. To make good use of the extra space, this podium is usually designated for the swimming pool, as it is in the case of the Pyne. The 370-square-meter rectangular terrace is on the eighth story of the 42-floor residential complex. The building is surrounded on all sides by old buildings, trapping the Pyne within a sea of concrete.

The Pool at Pyne surround by buidlings; credit TROP Terrain+Openspace

Pok was concerned not only about the boxed-in feeling he had in the space, but also about the imposing Bangkok Train Station that sits directly across from the it (which helped sell out the units in one day). The station is about a hundred meters long and three- to four stories high — a nightmare for designers who want to be able to take advantage of pleasing views. Pok’s first priority became creating a “loosed” floor plan to mitigate the surroundings and create a visually beautiful space to be viewed from above.

Looking down for the building; credit TROP Terrain+Openspace

The design avoids the expected by forfeiting the usual rectangular pool deck and instead opts for individual wooden terraces to create a loose, relaxed atmosphere that serves to contradict the surrounding urban landscape. These terraces are filled with modern, white furnishings to encourage lounging and relaxation. 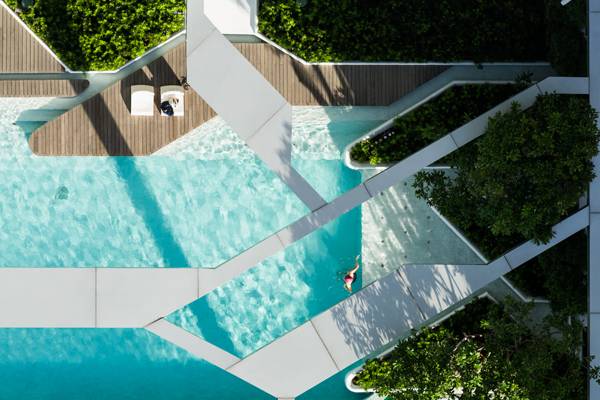 Angled lines and rounded corners form a unique geometry for the pool’s edge and allow the pool to flow through the space instead of simply sitting inside it. Completing the space are lush plantings outlining the pool that create a luxurious oasis within the crowded city. The textural plantings frame the space without overpowering it, which is accomplished by the use of a monotone color scheme. Finally, Pok took advantage of the overhead views from the building itself, as well as the view from the neighboring train station, and created an overhead concrete skeleton structure to frame in the space and connect the pool to the architecture of the building. 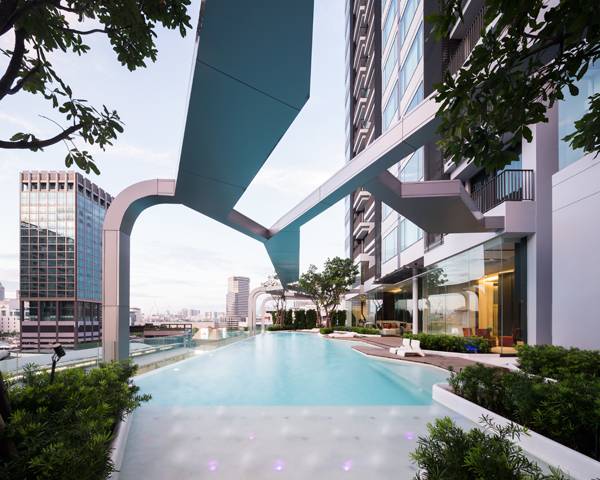 “To make our pool different than others, the ‘Skeleton’, a light clad structure, was proposed to frame the swimming pool three-dimensionally. Before, the so-called sky pool is just a flat piece of water on top of the building. Sure, swimmers can enjoy a great prospect view outside, but, looking back to the building, nobody recognizes the presence of the pool below,” Pok said. As stated by Pok, the skeleton structure not only serves as an artistic overhang, but also houses the low-level lights that help to welcome nighttime swimmers. 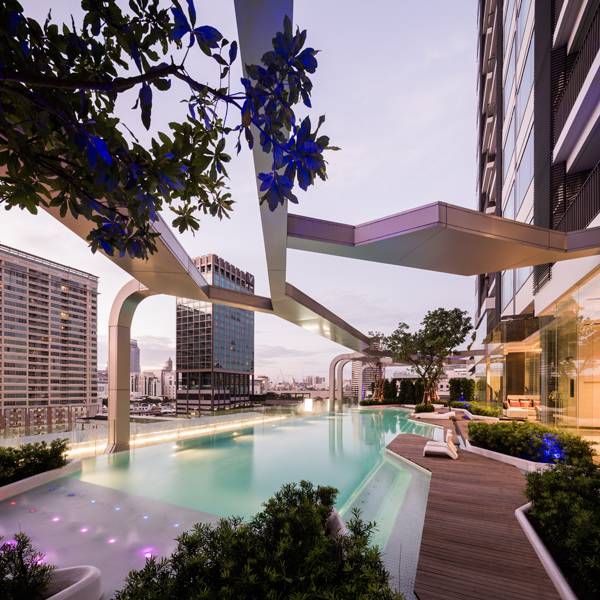 From above, the glowing “Skeleton” slices the pool into individual sections. From below, it creates an intimate space in a vast urban landscape. By creating an open, geometric structure, the sense of a canopy is achieved, but at the same time the space still appears to be seamless with the surrounding city. The designer’s thoughtful design proves that spaces should be three-dimensional and not flat. By including the plane above, he creates a more authentic space that is more true to the landscape surrounding it. The pool at the Pyne proves the theory that when designing for a place, the spaces and the neighborhood should play vital roles in the design. Also see: The Garden of Hilton Pattaya by TROP : terrains + open space Top 10 Names In Landscape Architecture Today Article written by Erin Tharp Published in Blog