+ Pool by Play Lab: The floating pool that’s more than just a pool. Living in New York City is probably one of the most amazing urban experiences anyone could imagine. There are hundreds of thousands of artificial places for people and plenty of natural river water surrounding them. Wouldn’t it be great if the Hudson River were swimmable? Why can’t it be possible? The design firms PlayLab and Family think it’s time to see the water around the city with new eyes and add one more exciting experience to its attractions: a very special floating pool. As New Yorkers and designers, Dong-Ping Wong (from Family) and Archie Lee Coates IV and Jeffrey Franklin (from PlayLab) asked themselves some questions during a really hot summer in 2010. Swimming in New York City’s natural waters might not be a safe option because of poor water quality, but the idea of a public space stretching into the Hudson River inspired them to develop a project that provides an innovative solution. And this is what + Pool does: filtrating the water that it floats in and improving the general quality level.  But + Pool is not just a filtration system. It is also an interesting design, put together by a multidisciplinary team, and a creative crowd-funding strategy. 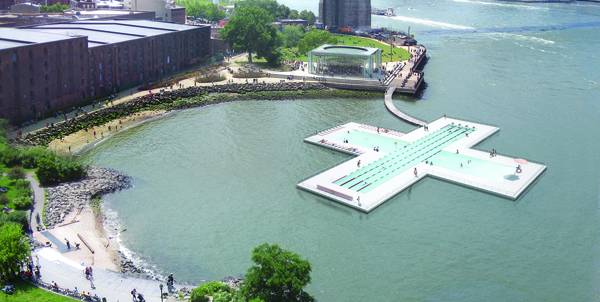 An overview of +Pool. Credit: PlayLab

Four in one The first step was the pool design in the plus-sign shape. Each arm is 32 feet (four lanes) wide, and the total pool area is 9,300 square feet. PlayLab and Family wanted to create a pool that everyone could enjoy, from kids to frequent swimmers. The plus shape offers a versatile range of possibilities. Basically, there are four pools in one, which can be used independently, combined, or as a completely open pool. As independent pools, we find Children’s Pool, Sports Pool, Lap Pool, and Lounge Pool. But when combined, one could swim in a fantastic Olympic-length Lap Pool. 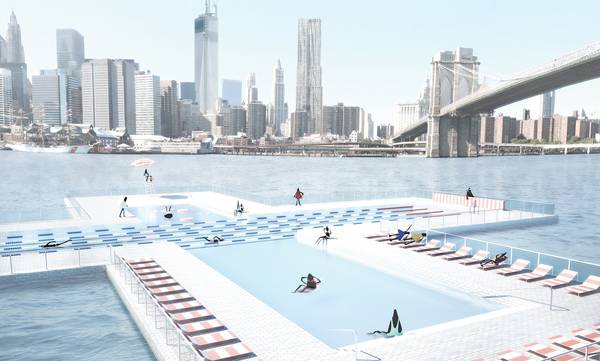 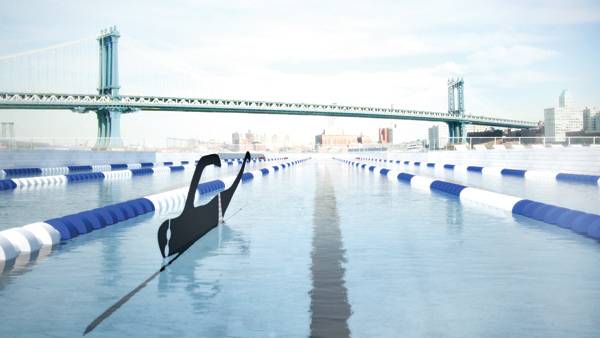 The filtration system How to make it possible was the heart of the project — and the biggest challenge of all. When PlayLab and Family launched their idea, they found support from different teams, including Arup, an engineering firm. Working hand in hand, engineers and designers developed a particular solution for the pool. Mainly, the system filtrates contaminants using three separated layers that also make up the sides of the pool. How does it work? The primary filtration layer is a geotextile that removes contaminants of 150 microns and larger, such as wildlife, greases, or suspended solids. The secondary and most complex layer avoids contaminants down to 1 micron, which means a lot of algae and organic matter. Finally, the water is disinfected by the third and last layer, becoming clean and safe for people and meeting New York City, state, and federal standards. And it’s all done without chemicals: just natural river water in the + Pool. 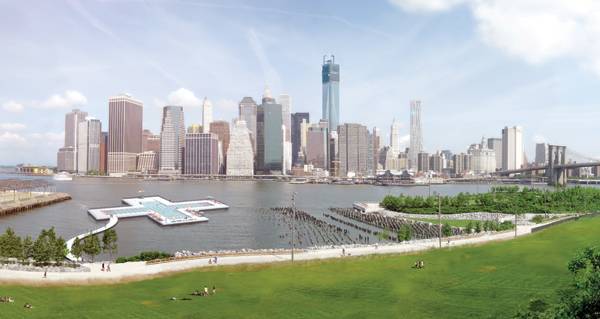 Would you get into it +Pool? Credit: PlayLab 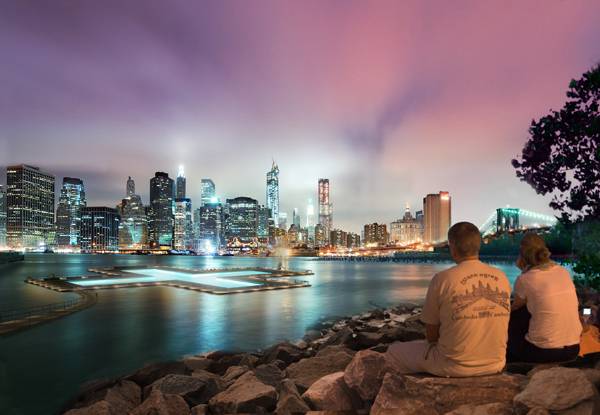 How the +Pool may look at night. Credit: PlayLab

+ Pool status Creating a pool that is the first of its kind is a long process, especially if each material needs to be tested. A full-scale mockup of a piece of the pool was built and has floated in Hudson River Park since April 2014. For the next six months, this Float Lab will capture a wide range of data to be used in bringing the full project to life in 2016. When + Pools are added to New York City waters, they will be much more than a floating public space. They will be a new way to look at natural water resources through design. Article written by Elisa García Nieto Published in Blog