On April 18th 2009, the New Scientist published an article on a remarkable project developed by researchers at the European Commission’s Joint Research Centre in Ispra, Italy, and the World Bank. The authors combined a series of maps to create a new map of connectedness showing the most interconnected and remote places on earth.

The maps are based on a model which calculated how long it would take to travel to the nearest city of 50,000 or more people by land or water. The model combines information on terrain and access to road, rail and river networks. It also considers how factors such as altitude, steepness of terrain and hold-ups like border crossings slow travel. 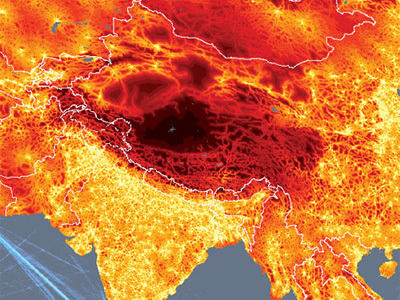 Plotted onto a map, the results throw up surprises. First, less than 10 per cent of the world’s land is more than 48 hours of ground-based travel from the nearest city. What’s more, many areas considered remote and inaccessible are not as far from civilisation as you might think. In the Amazon, for example, extensive river networks and an increasing number of roads mean that only 20 per cent of the land is more than two days from a city – around the same proportion as Canada’s Quebec province.

The maps were created to show how the distribution of people affects their access to resources such as education and medical care, and how we are increasingly pushing wildlife out of even the wildest corners of our planet.

The first image shows the final map of connectedness while the second image shows a zoomed view over the world’s most remote place: the Tibetan plateau. From here, says Andy Nelson, a former researcher at the European Commission, it is a three-week trip to the cities of Lhasa or Korla – one day by car and the remaining 20 on foot. Rough terrain and an altitude of 5200 metres make this the most secluded place on earth.